The mechanism that DNA hypomethylation leads to activation of oncogene and occurrence of malignant neoplasm is being increasingly recognized by researchers. Normal DNA methylation plays important role in stabilizing the phenotype of cell. DNA methylation status reduction and/or pattern alteration are related to activation and abnormally high expression of some oncogenes and cellular malignancy[1-6]. c-fms oncogene encodes for colony stimulating factor 1 receptor (CSF-1R)[7], c-fms/CSF-1R was highlyexpressed in hepatocellular carcinoma (HCC) tissue, but the mechanism remained obscure[8,9]. In this study, restrictive endonucleases Hpa II/Msp I digestion and Southern blot were used to study methylation status alteration of c-fms oncogene in HCC tissue and matching circum-cancer liver tissue, meanwhile the relationship between the alteration and clinical pathology of HCC was investigated. The gist of this study was to clarify the mechanism leading to c-fms oncogene high expression in hepatocellular carcinogenesis.

Thirty HCC patients were verified with pathological examination (25 males and 5 females, age range 32-76 years, mean 55 years). Fresh hepatic tissue of HCC focus and circum-tissues 2 cm from HCC focus were cut off, normal control was from HBV negative hepatic tissue of renal transplantation donor. All the tissues were washed with physiological saline and put in freezing tube, and then they were put in liquid nitrogen for storage.

About 0.5 g hepatic tissue was triturated in mortar, and a dissolvent (10 mmol/L Tris-Cl pH8.0, 10 mmol/L EDTA pH8.0, 0.5% SDS) 500 μL was added. The preparation was digested with proteinase K and RNase, then it was extracted twice with saturated hydroxybenzene and once with chloroformisoamylalcohol (chloroform:isoamylalcohol = 24:1), and at last 2.5 volumes of absolute alcohol and 0.1 volume of 3 mol/L sodium acetate (pH5.2) were added to precipitate the DNA. The extracted DNA was dissolved in TE buffer (pH8.0), and DNA concentration was detersmined with an ultraviolet spectrophotometer.

Plasmid extraction, restrictive endonucleases digestion, reclamation and purification were performed as the methods recorded in Molecular Cloning. The probe was labeled with DIG random labeling and detection kit.

Genome DNA 10 μg was digested with restrictive endonucleases Hpa II and Msp I 50 U each for 12 hours respectively. Digested DNA was examined with 0.8% agarose electrophoresis. The buffer used for electrophoresis was 0.5 × TBE. Electrophoresis was ended when 2 kb marker shifted to the middle of the gel. Photo was taken under ultraviolet ray transmission. The gel was immersed in 0.25 mol/L HCl for 10 minutes, washed with distilled water for 20-30 minutes, and then immersed in denaturalizing liquid twice for 15 minutes each time. The gel was again washed twice with distilled water, and then it was immersed into neutralizing liquid twice for 15 minutes each time. A piece of nylon membrane of the same size as the gel was cut, it was immersed into 2 × SSC for 20 minutes. Transfer was performed for 18 hours at room temperature by the capillary transfer method. Then the nylon membrane was taken out and washed several times with 2 × SSC. After this, it was fixed for 20 minutes under long wave ultraviolet radiation. The transferred nylon membrane was sealed in a plastic bag and then pre-hybridizing reagent was perfused into the bag. The bag was put in a 42 °C water bath for 2 hours, and then pre-hybridizing reagent was decanted off. The bag was sealed, after the hybridizing reagent containing the DIG-labeled probe had been put in. The bag was put into a 42 °C water bath and hybridized for 20 hours. After hybridization the nylon membrane was taken out, and showed coloration according to the instruction of the DIG random labeling and detection kit.

The tumors were variously classified into unifocal or multifocal, and massive or nodular (a main tumor mass with satellites). The size and inner-condition of the tumors were recorded. The histological grading was based on Edmondson standard I-IV scale.

Hpa II and Msp I are isoschizomers. Both can digest CCGG sequence, but when the sequence is methylated into C-mCGG, only Msp I can digest while Hpa II can not. Methylation status of the gene may thus be determined by relying on such a difference. The data in this study showed that after digestion with Hpa II, hybridizing bands of less than 6.5 kb in size were observed in 36.7% (11/30) of HCC tissue and 13.3% (4/30) of circum-cancer liver tissue, which resembled those of the hybridizing bands digested with Msp I. The results indicated that the methylation status of c-fms oncogene in the tissue was decreased (Figure 1, Figure 2). 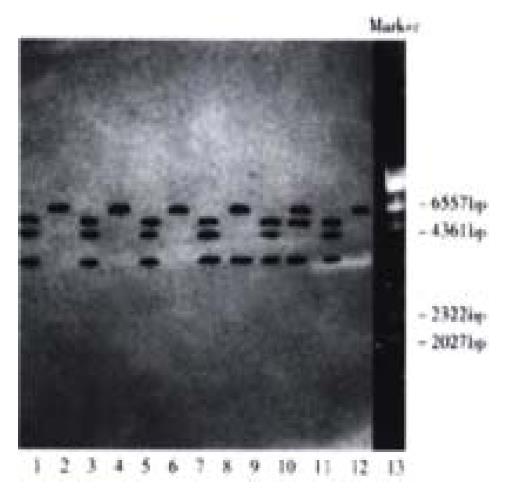 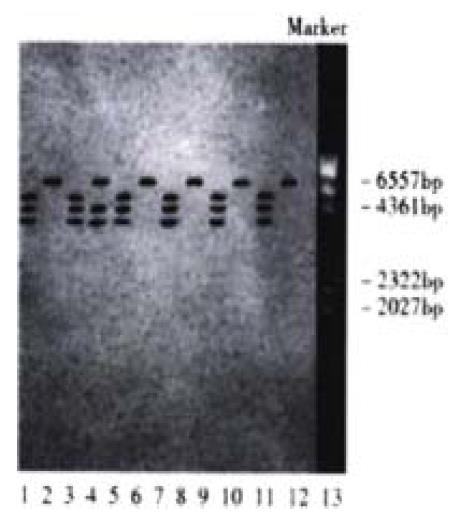 Hypomethylation rate of c-fms oncogene in HCC tissue and circum-cancer liver tissue was compared, the difference was determined, the result is shown in Table 1.

Relationship between hypomethylation of c-fms oncogene and clinical pathology

The relationship between hypomethylation of c-fms oncogene in hepatic tissue and the sex, age and pathological Edmondson scale of patients was analysed; the results are shown in Table 2.

In the process of cellular carcinogenesis, genetic and epigenetic mechanism contributes to abnormal expression of gene. The genetic mechanism involves the mutation and chromosome rearrangement, with which genetic products of abnormal molecular structures can be produced[10-19]. The epigenetic mechanism mainly refers to an altered methylation status of 5’-cytosine in the DNA sequence, which leads to an abnormal expression of gene in quantity, but no change in DNA sequence and genetic product[20-24]. In the process of cellular carcinogenesis, the methyl groups in CpG islands of DNA are lost gradually. Although the accurate mechanism between DNA hypomethylation and cellular carcinogenesis remains obscure, some data showed that DNA hypomethylation could affect chromatin condensation in the middle stage, which led to a change and/or rupture of chromosome[25-31]. DNA hypomethylation is a kind of molecular structure leading to abnormal expression of gene; it facilitates a high expression of gene[32]. Highly specific DNA methylation types exist in human genomes, and are reflected in genetic characteristics of DNA, such as transcription, duplication, recombination, transposition and mutation. One biological function of human genome DNA methylation is to keep promoter of gene in silent status for long. 5’ methyl-cytosine in special DNA sequence can mediate the specific combination and interaction between DNA and some functional proteins. As the interactions locate in the core region which regulates biological function of gene, sequence-specific methylation of DNA can affect cellular function[33-39]. Furthermore, DNA methylation depends on combining special proteins, and it directly or indirectly induced conformational alterations of DNA. DNA methylation is a kind of modificatory mode of cellular DNA at transcription level. In human genome, CpG islands in house keeping genes including a great number of oncogenes are in the form of methylation. Transcription and expression of the methylated genes especially oncogenes are limited. Decline of DNA methylation status at special sites of oncogene induces abnormal expression of the gene[28,40-43].