Hepatocellular carcinoma (HCC) is one of the most common human malignancies world wide[1,2], and is closely associated with infection of HBV and HCV and contamination of aflatoxin B1[3-6]. Although the molecular mechanisms of hepatocarcinogenesis remain poorly understood, an increasing number of genetic abnormalities have been recognized[7-10], for example, the p16 gene[11,12] the p53 gene[13-18], the E-cadherin gene[19], and the c-myc gene[20]. In relevance to HCC, inactivation of a tumor suppressor gene p16, which is important in the regulation of cell cycling, has recently been described in a significant proportion of patients with HCC[11]. An important mechanism of gene inactivation is aberrant methylation in the promoter region of the gene[11,21,22]. Evidence of p16 hypermethylation has also been documented in several human cancers [21-26]. However, to our knowledge, there were few studies on the p16 gene in HCC. 5-Aza-2’-deoxycytidine (5-Aza-cdR) is thought to act by inhibiting DNA methyltransferase that methylates cytosine residues in eukaryotic DNA[27]. Cedar et al[28] even took it as an experimental tool for demethylation. This drug appears to incorporate into the cellular DNA where it acts as a noncompetitive inhibitor of the maintenance methylase[29]. Methel moieties are thus passively removed when the DNA undergoes replication, and indeed, numerous inactive cellular and viral genes can be turned on following exposure to 5-Aza-cdR[30]. In order to determine whether p16 hypermethylation is involved in hepatocarcinogenesis, we determined the p16 gene protein, mRNA expression and methylation status in HCC cell line HepG2 before and after treatment with 5-Aza-cdR, and observed the growth change.

Human hepatocellular carcinoma cell line HepG2 was obtained from the Laboratory of Gastroenterology, Southwest Hospital. It was cultured in RPMI 1640 supplemented with 100 mL/L fetal bovine serum, 100 KU/L penicillin/ streptomycin and 5% sodium pyruvate at 37 °C in humidified atmosphere of 50 mL/L CO2.

Cells (approximately 1 × 105/mL) were plated in the vial, and treated with 5 × 10-7M 5-Aza-cdR (Sigma Co.) for 24 h. The medium was changed after 24 h drug treatment and cultured for 9 d, to ensure complete recovery from the immediate toxic effects of 5-Aza-cdR[31]. Untreated cells were analyzed under similar conditions as a control.

Effects of 5-Aza-CdR on tumorigenicity

Cells (1 × 106/3 cm dish) were cultured onto acid-washed 0.8 × 0.8 (mm) coverslips. The cells were fixed in 4% parafomaldehyde for 30 min at room temperature. The slides were washed in phosphate-buffered saline (PBS) three times for 3 minutes. The endogenous peroxidase activity was quenched by 10 minute incubation in methanol with 3% hydrogen peroxide (Zhongshan Chemical Co.). The fixation slides were then cleared with PBS. Nonspecific binding was blocked by applying normal goat serum in humidity chamber in a dilution of 1:10 for 30 minutes. Slides were blotted, and the anti-entire-human p16 antibody (Zhongshan Chemical Co.) (ready to use) as a primary antibody was applied for 1 hour at 37 °C in a humidity chamber. Secondary antibody (rabbit anti-mouse IgG) (Zhongshan Chemical Co.) diluted with PBS and normal human serum (40 μL rabbit anti-mouse antibody, 50 μL normal human serum, and 910 μL PBS) was applied for 1 hour at 37 °C in a humidity chamber. Finally, peroxidase-antiperoxidase conjugate diluted 1:100 in PBS was applied for 1 hour at 37 °C after washing with PBS. Slides were kept in diaminobenzidine tetrahydrochloride for 10 minutes (50 mg in 200 mL PBS with 25 μL of 30% H2O2) (DAB; Zhongshan Chemical Co.). The manufacturer provides the presence (+) and absence (-) controls. The expression of p16 gene was observed under the light microscope and analyzed by the figure analysis method.

DNA was isolated with the Tripure isolation reagent. A PCR assay relying on the inability of some restriction enzymes, e.g. Hpa II or Msp I, to cut methylated sequences was used to analyze the methylation status of the second exon of the p16. DNA digests were performed according to the manufacturer’s directions (Boehringer Mannheim Co.). DNA (1 μg) was digested for 2 h with 10 units of enzyme/μg of DNA. 200 ng of the digested DNA were amplified with primers flanking the restriction sites. The primers set used for methylation a nalysis of p16 exon 2 were 5’-CTGCTTGGCGGTGAGGGGG-3’ (sense) and 5’-CCTCACCTGAGGGACCTTC-3’ (antisense). The amplifiction products was 402 bp. Conditions were: 94 °C for 3 min, 35 cycles of 94 °C for 1 min, 57 °C 30 s, and 72 °C for 40 s, followed by incubation at 72 °C for 1 min. PCR products were resolved on 2% agarose gel. To rule out the possibility of incomplete restriction, all samples were digested twice with each of the enzymes in independent experiments. PCR ampifications from each of the duplicate digests were repeated at least twice to ensure reproducibility of the results.

t tests were used for statistical analysis. Significance was defined as P < 0.05.

HepG2 cells treated with 5-Aza-cdR were analyzed by flow cytometry to identify any change in its cell cycle profiles. The treated cells showed an increase in the proportion in G1,from 79.4% to 82.2% and a decrease in S, from 11.9% to 6.4%. Apoptotic rate increased from 6.5% to 14.5%. These results indicated that 5-Aza-cdR may induce cancer cell division and apoptosis.

Effects of 5-Aza-cdR on tumorigenicity

Tumors induced via the injection of untreated HepG2 cells were approximately 1.32 cm3 in size, whereas the tumors induced by HepG2 cells treated with 5-Aza-cdR averaged 0.98 cm3 in size. These demonstrated that the growth-inhibitory effects of 5-Aza-cdR treatment in vivo were still recognizable.

The positive 5-Aza-cdR-treated cells showed intense homogenous brown staining of their nucler. After treatment with 5 × 10-7 M 5-A2a-cdR, HepG2 showed a higher expression of P16 protein than untreated cells. We observed under light microscope 5 fields in every slide at random, measured the staining degree of every 124 positive cells by the figure analysis method, IOD was 212.81 ± 62.56 and 495.89 ± 52.12 respectively in the untreated group and the treated group. This showed a significant difference (P < 0.05). Although P16 protein expression alternations are very complicated and still undefined, our data showed that P16 protein expression could be silenced by hyper methylation of p16 gene (Figure 1, Figure 2). 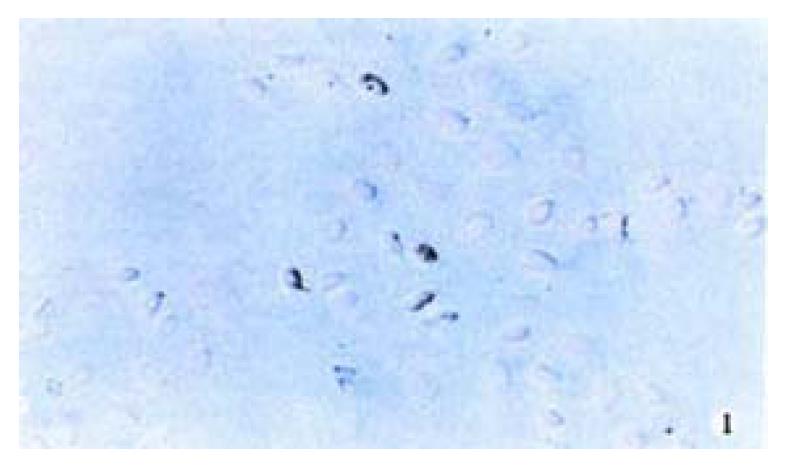 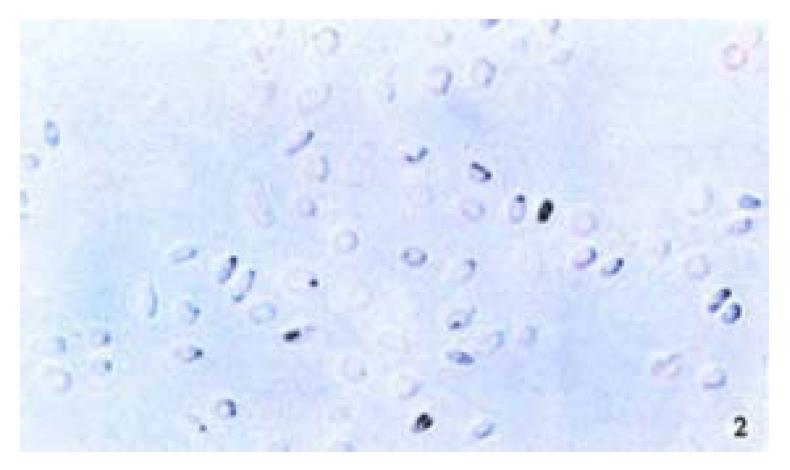 Figure 3 shows that expression level of p16 mRNA in HepG2 cells was increased after treated with 5 × 10-7 M 5-aza-cdR. The p16 gene, was selected for this study, because it was known to frequently undergo de novo methylation during tumorigenesis and because 5-Aza-cdR might be highly effective in inducing the expression of the gene inappropriately silenced by de novo methylation[18]. These results demonstrated a strong correlation between hypermethylation of the p16 and transcriptional silencing of this gene.

Before 5-aza-cdR treatment the p16 exon2 showed hypermethylation, and therefore could not be deaved by loth HpaII and Msp I. It has been known that only the DNA indigested with Hpa II or Msp I can be amplified. After treated with 5-aza-cdR, the p16 gene became demethylated, then could be deaved by loth of the enzymes, and this failed to be emplified. Our experiment demonstrated that after hypermethylation in the p16 exon2 and 5-aza-cdR could enhance demethylation (Figure 4).

HCC is one of the most frequent human malignances worldwide. A number of tumor suppressor genic abnormalities are being recognized involving in the development of HCC[7-20]. The tumor-suppressor gene, p16, coding for an inhibitor of cyclin-dependant kinase (cdk) 4, was isolated and mapped to chromosome 9p21[32,33], a locus frequently lost in diverse malignancies[34]. The p16 gene product p16 protein was originally isolated as a protein that was associated with cdk complexes[35] and thought to exert a negative type of control on cell proliferation through its binding to cdk4, thereby preventing cdk4 from forming an active complex with cyclin D protein[36]. As one of cancer-associated genes, the p16 gene abnormalities is arousing more and more attention. Germ-line mutations of the p16 gene have been identified in hereditary melanomas[37]. In addition, the gene is homozygously deleted or mutated in uncultured tumors of diverse origin[38], including pancreatic adenocarcinomas[39], melanomas[37], esophageal carcinomas[40,41], gliomas [42] lung cancer[43] and hepatocellular carcinoma[44]. Recently, it has been reported that inactivation of the p16 gene is frequently associated with aberrant DNA met hylation in all common human cancers[26]. However, there have been relatively few studies on expression of p16 in HCC.

Sun et al[45] found that DNA methyltransferase (MTase) mRNA levels were significantly higher in HCC and HCC cell lines (including HepG2 cell line), but they did not study the related genic methylation. Wong et al[46] demonstrated that aberrant methylation of the p16 gene occurred in 73% of HCC tissues. Hui et al[44] studied six HCC cell lines and found no p16 mRNA and protein in only one of them. After ruling out mutation and homozygous deletion of the p16 gene, they guessed that the silence of p16 gene might be associated with enhanced methylation of p16 gene, although the methylation status was not tested. However, p16 mRNA was detected in the other five HCC cell lines, and they thought that the lack of p16 gene transcription was not a frequent event in HCC cell line. The absence of p16 protein and presence of p16 mRNA expression strongly suggested that inactivation of p16 gene function could occur at the posttranscriptional level, but, the presence of expressions of both p16 mRNA and protein in HepG2, could not be explained. Boyes et al[47] discovered that the inhibition of gene transcription correlated with density of DNA methylation and the length of the promoter region. Hsieh[48] also found that the expression of gene transcription depended on CpG island methylation density; lower levels of methylation yielded a 67% to 90% inhibition of gene expression, higher levels of methylation extinguished gene expression completely. Numerous investigations described reactivation of genes by 5-Aza-cdR by acting on various loci of the inactive X chromosome[49], the VHL gene[50], the E-cadherin gene[51], the estrogen receptor gene[52] and the p16 gene[31]. In order to detect similar methylation changes in HepG2 cell line, we also used 5-Aza-cdR.

In this study, HepG2 cells treated with 5-Aza-cdR, showed demethylation of the p16 gene. The p16 mRNA and protein were all increased dramatically, cell cycle was arrested in G1, apoptototic rate increased and implanted tumor grew more slowly. According to our results, we thought that: p16 hypermethyla tion is associated with HCC cell line; MTase is increased in HepG2 cell line; 5’CpG island of p16 promoter was not methylated completely in this HCC cell line; p16 gene can be reactivated by inhibiting the activities of MTase; p16 methylation may be a common event during the establishment of the cell line in vitro; and p16 gene encodes a cell cycle regulatory protein that belongs to the cyclin-dependent kinase inhibitory protein family and regulates the G1/S phase cell cycle transition, and therefore, reactivated p16 may affect the growth of the HCC cell line. Xiao et al[53,54] found that 17p13.3 CpG island, PYN22.1, Rb gene all showed hypermethylation, we guess that 5-Aza-cdR may reactivate those genes.

The induction of p16 activation by 5-Aza-cdR in vivo and the decreased tumorigenicity in animal experiment suggest the chemotherapeutic potential of 5-Aza-cdR in the management of cancer.

supported partly by the National Natural Science Foundation of China, No.39870344