Hepatitis B virus (HBV) belongs to the group of hepatovirus, a major pathogen of human acute and chronic hepatitis B[1-4], which has a very close association with human hepatocellular carcinoma (HCC)[5-8]. For example, a statistical data from a hospital in Shanghai showed that 80% of HCC patients were positive for HBsAg (personal communication). The published data reported that people infected with HBV have a 200-fold greater risk of developing HCC than age-matched population not infected with HBV[9-11]. So HBV infection, including its consequences, is one of the key problems for the human health in the world. Since HBV only infects human beings and a few kinds of higher primates[12-14], the lack of culture cell and animal model impede the study of biological characteristics of HBV and human hepatitis B in the laboratory[15,16]. In 1985, the first transgenic mouse carrying HBV genes was generated[17], and thereafter the transgenic mouse system was applied in HBV studies[18-26].

HBV prevailing in the world has at least 4 subtypes[27-30], ayw, adr, ayr and adw, among which subtype adr is the most prevailing in China[31,32]. The complete genome of subtype adr has been cloned and analyzed from HBV infected population in China. It was identified that subtype adr was different from other 3 subtypes in DNA and protein sequence[33]. In order to produce the animal model for exploring adr subtype of HBV associated biomedical issues, we generated transgenic mice harboring complete genome from subtype adr of HBV by microinjection method, in which the HBsAg gene and HBeAg gene could be expressed, and the genomic DNA of HBV could be replicated and packed into complete virus particles. This model will be very useful for examination of many aspects of HBV and its associated biomedical issues in vivo.

Preparation of HBV DNA and microinjection

padr-1-dimer has two copies of intact HBV (adr subtype) genome head to tail, cloned in BamH I site of plasmid pBR322 (Figure 1). Restriction enzymes Sal I and Cla I were used to digest Padr-1-dimer, followed by 7 g·L-1 agarose gel electrophoresis of the digested products, the 7.0 kb band was retrieved, purified and dissolved in TE buffer for microinjection. Microinjection and embryo manipulation were performed according to the methods described in References[34-36]. 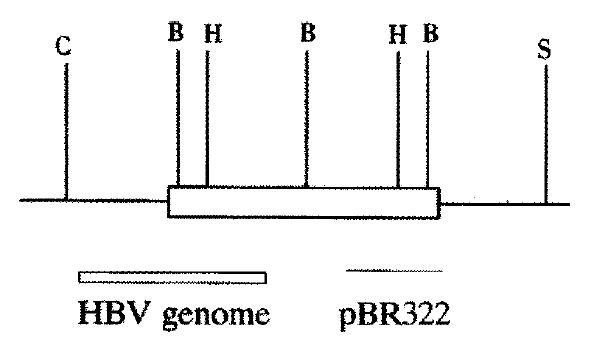 Genomic DNA from tail tissue of transgenic mice and normal mouse were prepared, and amplified with primers in S region according to the cycling program: 94 °C, 30 s; 60 °C, 40 s; 72 °C, 45 s; run 35 cycles in 50 µL reaction system. Fifteen µL of PCR products were loaded on 15 g·L-1 agarose gel in the presence of 0.5 µg ethidium bromide per mL. 380 bp band was visualized by UV fluorescence. Southern blot was performed on genomic DNA by agarose electrophoresis of 30 µg restricted DNA with Bam HI. Nylon filtrates were hybridized with the probe including HBV genome labeled with α-P32-dATP for further characterization of the transgenic mice.

HBV gene expression in serum Venous blood in eye sockets of mice was collected, serum was isolated by centrifugation, and then used for HBsAg and HBeAg ELISA or RIA.

HBV gene expression in tissues The distribution of HBsAg and HBcAg was assessed by the labeled-avidin-biotin detection procedure. Briefly paraffin-embedded sections were treated for 10 min at 37 °C with 30 mL·L-1 hydrogen peroxide and washed with PBS. Rabbit anti-HBsAg primary antiserum at 1:100 dilution, and goat anti-HBcAg primary antiserum at 1:200 dilution were applied over night at room temperature. After washing with PBS, a secondary antiserum consisting of biotin-conjugated goat anti-rabbit IgG and rabbit anti-goat IgG was applied at 1:200 dilution for 40 min at 37 °C, and then washed with PBS. Then the preparation was treated with 1:100 dilution ABC complex stained with DAB, and finally counterstained with hematoxylin.

Fifty µL of the serum from transgenic mouse was assayed for anti-HBsAg, anti-HBeAg and anti-HBcAg by ELISA according to the Kit protocol.

Histopathological study The specimens of liver, kidney, heart, spleen from transgenic mice were fixed in formalin, paraffin embedded, sectioned and stained with HE.

Examination of HBV Dane’s particles in liver tissue from transgenic mice under TEM Several immunohistochemically HBV-positive mouse liver specimens were fixed over night at 4 °C in 40 mL·L-1 paraformaldehyde and 1 g·L-1 glutaradehyde in PBS. They were then postfixed in 10 g·L-1 OsO4 in cacodylate buffer for 1 hr at room temperature, dehydrated in gradient ethanol, and embedded in epoxy resin. This sections were cut on an LKB Ultratome III, mounted on copper grids, stained in uranyl acetate and lead citrate, and examined with electron microscope.

PCR and Southern-blotting results indicated that 4 mice were positive. So four founders were obtained. The founder mice were named HB adr dimer-x. The positive rate was 66%. Then the founders were mated with the normal mice of the same line. 27 F1 offspring of the founder mice were born. In 14 of them PCR showed positive genomic DNA PCR. The offspring of F1 were 56 mice, 28 of them were positive, and the positive rate was 50%. The exogenous genes can be transmitted through the germ line (Figure 2).

Distribution of HBsAg and HBcAg in transgenic mice Immunohistochemical study of liver and kidney tissues from transgenic mice indicated that the distribution of positive hepatocytes was uneven, HBsAg-positive particles were located mainly in cytoplasm of hepatocytes. HBsAg expression level was weaker in kidney than in liver; the products of immune reactions of HBcAg-positive were not very certain, and mainly emerged in a few nuclei of hepatocytes from the individuals that were invariably HBsAg-positive (Figure 3). No obvious product of immune reaction from HBsAg and HBcAg positive mice was found in spleen, skin, testis and other detected tissues.

Serum antibody in transgenic mice The ELISA test indicated that there was no significant positive result of HBV antibodies in HBV transgenic mouse serum.

HBV Dane’s particles in liver in transgenic mice under TEM HBsAg particles (spherial and filamental) were found in the endoplasmic reticulum of some hepatocytes, a few of in renal tubule-epithalia, and the cytoplasm of a few Kupffer cells (Figure 4). 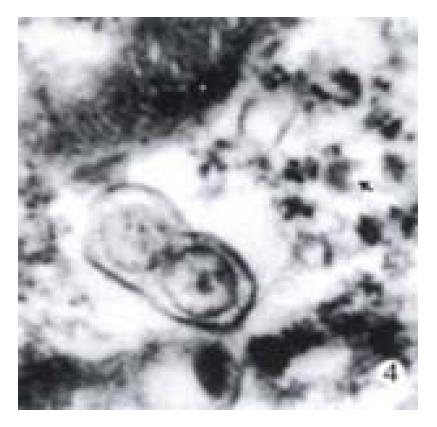 Histopathologic observation in transgenic mice tissues Mice have been monitored histologically for over 1 year without evidence of pathological changes in any organ, especially the liver and kidney. The serum ALT and AST assays indicated that there was no significant difference between the transgenic mice and the normal ones.(P > 0.05) (Table 2).

The HBV transgenic mice show replication of the HB virus in the hepatocytes, but have no evidence of cytopathology of the liver and other organs or tissues.

In theory, HBV genes microinjected are complete in structure, and can be expressed and replicated in their bodies[37,38], because we have purposefully prepared the fragment which contains two copies of intact HBV (adr subtype) genomes head-to-tail to make it sure that all of four open reading frames of HBV genome are complete in structure. Four of the founders all showed serum HBsAg-positive, but the expression level is different. We think this is due to the different integrated site of HBV DNA. In general, the exogenous gene will be integrated into multi-sites in transgenic mice. This is similar with the other reports[39,40].

Immunohistochemical assays of several tissues from transgenic mice revealed that HBV gene tissue-dependent expressions were tissue-dependent, and the genes were mainly expressed in the liver and kidney, but the expression level was different; this is similar to HBV-infection in nature. Examination of liver and kidney tissue from transgenic mice under transmission electron microscope revealed the existence of Dane’s particles and HBsAg particles in hepatocytes, which confirmed the ability of HBV genome replication in the transgenic mice.

Serum anti-HBs, anti-HBc and anti-HBe detected by ELISA were negative in all of the transgenic mice, and suggested that these mice were tolerant to HBsAg, HBcAg and HBeAg; this result was consistent with that of other author’s reports[41]. Now, we obtain the F3 generation positive mice. The HBV DNAs were able to be transmitted through the germ line of the mice from one generation to another.

The results of our experiments shows that HBVgenome introduced by microinjection is integrated into the mouse genome, and the HBV genes can be expressed, replicated and packaged. So these lines of HBV transgenic mice may be used as the animal model for the study on HBV and its associated biomedical issue. And it can also be applied in the selection of anti-HBV drugs and vaccine[42,43]. It is also useful for exploring the mechanism of HBV infection.