AIM: To study the cell types, localization, distribution density and morphology of APUD cells in the intestinal mucosa of stomachless teleost fishes.

METHOD: By using the peroxidase-antiperoxidase complex ( PAP ) immunocytochemical staining technique the identification, localization and morphology of immunoreactive (IR) endocrine cells seattered in the intestinal mucosa of grass carp (Cyenopharyngodon idellus), black carp (Mylopharyngodon piceu s) and common carp (Cyprinus carpio) were investigated with 20 kinds of an tisera prepared against mammalian peptide hormones of APUD cells, and likewise by using avidin-biotin-peroxidase complex (ABC) method those of silver carp (Hypophthalmichthys molitrix), bighead (Aristichthys nobilis), silver crucian carp (Carassius gibelio) and bluntnose black bream (Megalobrama amblyoce phala) were also studied with 5 different antisera. The replacement of the first antiserum by phosphate buffered saline (PBS) was employed as a control. IR endocrine cells were counted with a square-mesh ocular micrometer from 10 fields selected randomly in every section of each part of the intestine specimen. The average number of IR endocrine cells per mm2 was counted to quantify their dis tribution density.

RESULT: Gastrin (GAS), Gastric inhibitory peptide (GIP), glucagon (GLU), glucagon-like immunoreactants (GLI), bovine pancreatic polype ptide (BPP), leucine-enkephalin (ENK) and substance P (SP)-IR endocrine ce lls were found in the gut of grass carp, black carp and common carp, and somatos tatin (SOM)-IR endocrine cells were only seen in common carp. GAS, GIP and GLU-IR endocrine cells were found in the intestinal mucosa of silver carp, bigh ead, silver crucian carp and bluntnose black bream. Most of IR endocrine cells had the higher distribution density in the foregut and midgut, and were longer in shape. They had a long apical cytoplasmic process extended to the gut lumen and a basal process extended to adjacent cells or basement membrane and touched with it. Sometimes, the basal cytoplasmic process formed an enlarged synapse-like structure in the contiguous part with basement membrane. This phenomenon provide d new morphological evidence for neuroendocrine and paracrine secretory function of these enteroendocrine cells.

CONCLUTION: At least 8 kinds of IR endocrine cells were found in the gut of stomachless teleost species for the first time in China. These IR e ndocrine cells scattering in the gut mucosa belong to the APUD system. Among the m, the hormones secreted by SP-, ENK-, SOM- and GLU-IR endocrine cells belon g to the peptides of dual distribution in the brain and gut. This provided new evidence for the concept of brain-gut peptide. According to the cell types, dist ribution density, morphological characteristics and variety in shape of APUD cells in the gut of stomachless teleost fishes, it is deemed that the digestive tract of fishes is also an endocrine organ of great importance and complexity.

Gastrointestinal endocrine cells are different from other cells of endocrine gland, are discrete cells spread among the gastrointestinal mucosal epithelial cells. Pearse first proposed that all endocrine cells which produced peptide hormones were called APUD (amine precursor uptake and decarboxylation) cells in 1968[1,2]. APUD cells can be divided two groups: in one are those located in the nervous system, and in the other group are there distributed in the peripheral organs, mainly the digestive system. Many studies of the mammalian gastro-e ntero-pancreatic (GEP) endocrine system have been reported, which, to date, have resulted in the identification of about 18 endocrine cell types and at least as many hormones[3-5]. Enteroendocrine cells of fishes are difficult to demonstrate. For example, most of the identification procedures, which were found to be positive for mammalian enteroendocrine cells, failed on adult fish species. There was only a faint reaction with argyrophilic stains and with lead haematoxylin[6], and also could not identify the types or species of endocrine cells[7]. Although endocrine cell types that exist in the fish gut may differ from those of mammals, the questions of a cross-species specificity of anti sera against mammalian hormones and whether these antisera will show immunoreactivity in the gut of fish are very important. Recent years immunocytochemical studies using antisera against mammalian hormones clearly showed the existence of endocrine cells in the digestive tract of some teleost fishes[8-12]. Our series of studies also showed that antisera against mammalian hormones could be effectively used on teleost species, and identify the types of APUD cells in the GEP of fish species[13-19]. This paper reports the cell types, localization, distribution density and morphology of APUD cells in the gut of 7 kinds of teleost fish species cultivated mainly in China. The studies will provide new informations about neuro-endocrinology (the concept of brain-gut peptide hormones) animals, physiology, pathology and gastroenterology of animals.

Seven kinds of teleost fishes, grass carp ( C. idellus ), black carp ( M. piceus ), common carp (C. carpio ), silver carp ( H. molitrix ), bighead (A. nobilis), silver crucian carp (C. gibelio) and bluntnose black bream (M. amblyocephala), 3-6 fish of each species, were used in this studies. All fishes were reared temporarily and dissected after 2 days fasting. The digestive tract was drawn out, and the gut was divided into five pieces: the anterior segment of foregut, posterior segment of foregut, midgut, anterior segment of hindgut and rectum. All specimens were fixed by immersion in Bouin’s fluid for 24 h, dehydrated and made transparent through ethanol-xylene serial procedures, embedded in paraffin (54 °C) and sectioned (5 μm). The sections were mounted on slide, treated with gelatin and dried 12 h at 45 °C.

The details of antisera and main reagents used are listed in Table 1.

① Put into 3% H2O2-methanol for 10min at 20 °C to block auto-peroxidae; ② to incubate with normal goat serum for 30 min at 20 °C for preventing nonspecific reactivity; ③ drop in 20 different first antisera separately and incubate for 20 h at room temperature (for PAP method); ④ drop in 5 kinds of first a ntisera separately and incubate for 20 h at room temperature (for ABC method); ⑤ for PAP method to see reference 13, and for ABC method to consult reference 19; ⑥ the control was treated in step with adjacent continuous section of immunocytochemical staining slice except replacement of the first antisera with phosphate buffered saline (PBS). IR endocrine cells were counted and photographed with an Olympus photomicroscope (PM-10AD) from 10 fields selected randomly in every section of each part of the gut per specimen with a square-meshed ocular micrometer (0.5 mm). The average number of IR endocrine cells per mm2 was counted to quantify their distribution density. 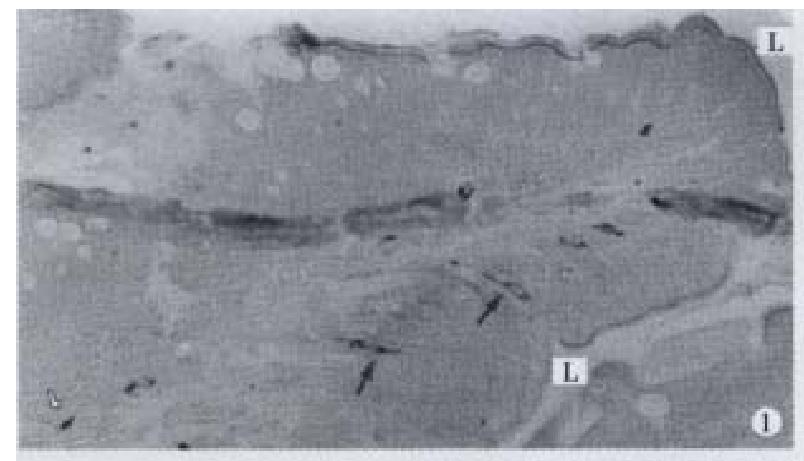 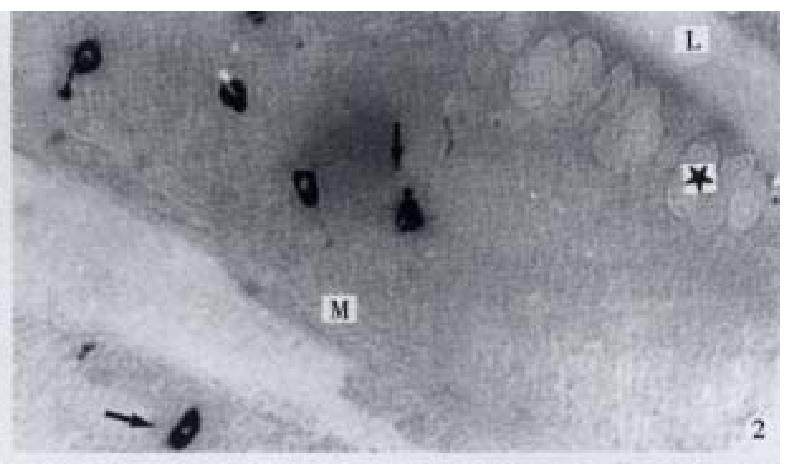 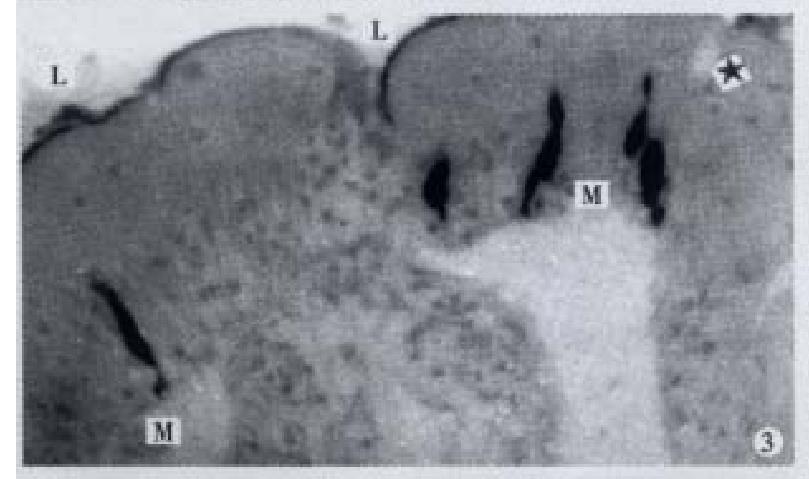 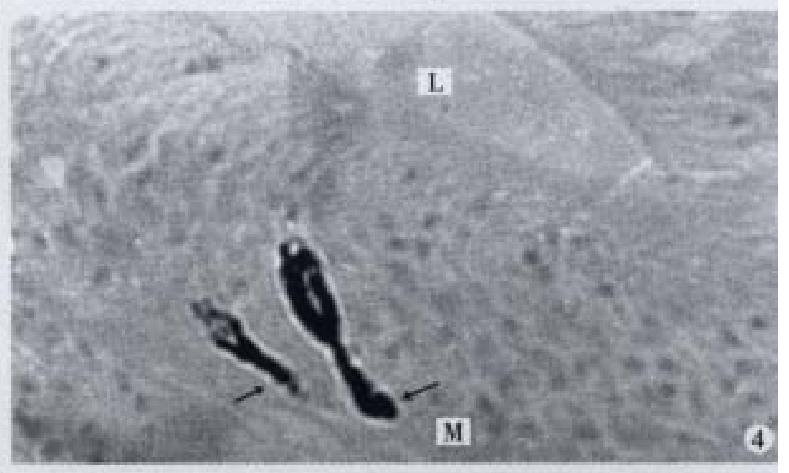 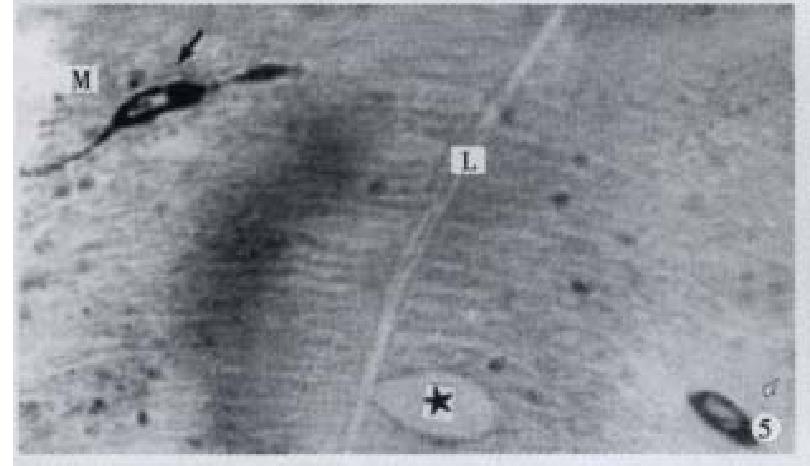 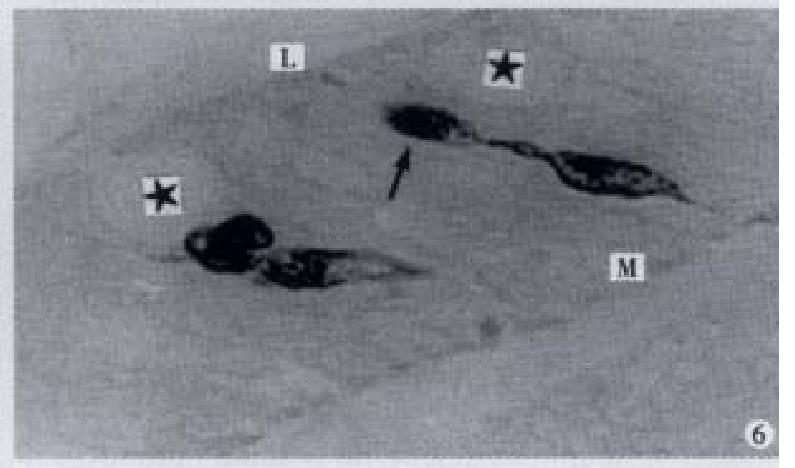 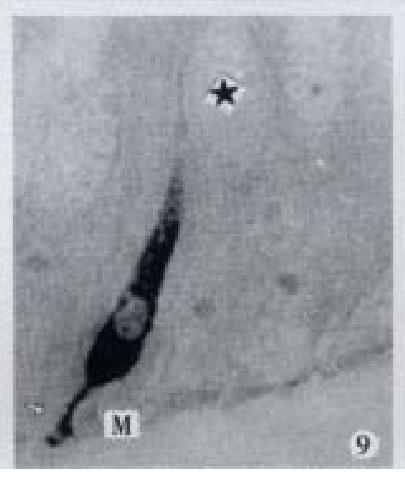 The distribution density and location of various endocrine cells have some relation to their function. For example, GAS-IR endocrine cells in the stomach of human and other mammals stimulate gastric acid secretion, but these cells distribute mainly in the anterior segment of foregut of 7 stomachless fish species. The anterior segment of the foregut (gut bulb) of stomachless teleosts is like the stomach, and serve a dual function of storing and digesting food-stuff[7,13]. There is a great amount of food in the anterior segment of foregut, and because of the stimulation of undigested particles of food, the activation of endocrine cells there is increased, resulting in the release of greater amount of hormones[15,20]. Substance P can stimulate a contractile function of smooth muscle[1], and SP endocrine cells are more numerous in the rectum; thus these endocrine cells may enhance the contraction of smooth muscle while fish excretes[7]. The differences of cell types and amounts of IR endocrine cells in various fish species relate to their feeding behavior and feeding habits[14-16,21]. Owing to the differences of chemical composition and pH value of the contents in the gut, the amount of hormones released by endocrine cells is also affected[13,14]. Our studies verify that IR endocrine cells of stomachless teleost fishes belong to the open type[1,21], that is, hormones are carried to the gut lumen (lumen-endocrine) by a long apical cytoplasmic process[2,21]. The sac-shaped enlargement of cytoplasmic process has the function of storing. The close type IR endocrine cells lacking the cytoplasmic process seem to be caused by the angle during sectioning[7]. In fact, almost all enteroendocrine cells seem to be the open type[1]. In addition, some IR endocrine cells’ basal cytopoasmic processes extend to the basement membrane or adjacent cells, and form the synapse like structure in the contiguous portions, there by providing morphological evidence for the paracrine and neuroendocrine functions, and furthermore the peptide hormones they secrete may have neurotransmitter function[1,2,21,22]. Previous studies propounded the peptide hormones SP, ENK, SOM and GLU to be present only in the brain[1], but the present study confirmed their existence also in the gut mucosa of stomachless teleost fishes. Wang et al[1] thought that the area of gastrointestinal mucosa was very large; the sum total of gastrointestinal endocrine cells exceeded a lump sum of cells in all other endocrine gland; thus, the digestive tract mucosa was reputed to be the biggest and the most complex endocrine organ in body. Rombout[6] concluded the endocrine system of digestive tract in teleost species was almost as complicated as in mammals. According to the present progress in the studies on the APUD cells in gastro-entero-pancreatic endocrine system of the fish species[21], it is deemed that the digestive tract of fish species is also an endocrine organ of great importance and complexity.