AIM: To investigate the significance and mechanism of cx-32 mRNA, cx-43 mRNA and their proteins in hepatocarcinogenesis.

METHODS: Sixty-one cases of HCC and 14 cases of normal liver tissues were detected by immunohistochemical and in situ hybridization (ISH) methods.

CONCLUSION: The aberrant location of Cx32 and Cx43 proteins could be responsible for progression of hepatocarcinogenesis, and the defect of cx genes in post-translational processing might be the possible mechanism.

Gap junctions are clusters of intercytoplasmic channels connecting neighboring cells which are composed of proteins called connexins (cx). Gap junction intercellular communication (GJIC) mediated by gap junction channels has been believed to be an important mechanism for the maintenance of tissues homeostasis and metabolic cooperation[1]. Carcinogenesis is one of the pathological proc esses in which disorders of GJIC may play an important role[2]. This stu dy was designed to investigate the significance and mechanism of cx32 and cx43 genes and their proteins in hepatocellular carcinoma (HCC).

The specimens of surgically removed 61 cases of HCC and 14 cases of normal liver tissues were collected at Xijing Hospital during the period of 1996-1998. The samples had not been treated with chemotherapy or radiotherapy before tumor excision. The pathological diagnosis was verifed on the respective paraffin embedded material by histologic examination (HE). The specimens were derived from 9 cases of grade I HCC, 19 of grade II and 33 of grade III, and these were 4 μm thick sections.

pGEM3-cx32 and pSG5-cx43 plasmids were kindly given by Prof. Gui Yuan Li in Hunan Medical University. After amplification, isolation and purification were done, pGEM3-cx32 plasmid was digested by Ecor-I (Gibco BRL, USA) and pSG5-cx43 by BamH-I (Gibco BRL, USA ). Electroporate the digested plasmids on 7 g/L agarose gel with λ DNA/Hind-III+-EcoR-I marker. Extract and purify the cx32 cDNA and cx43 cDNA from the gel as the protocol of AdvantageTM PCR-Pure Kit from Clontech Lab. Inc., USA. Label the cx32 cDNA and cx43 cDNA using Dig DNA Labeling and detection kit of Boehringer Mannheim, Germany.

Slides were incubated in 0.2 mL/L DEPC at RT for 10 min, in 0.2 mL/L HCl for 10 min and in 5 mg/L PK at 37 °C for 10 min and in 0.1 mol/L glycine to stop the digestion reaction, and then fixed in 40 g/L PFA for 10 min in sequence. After being washed in PBS, the sections were dehydrated in ethanol and air dried. Prehybridized at 42 °C for 30 min, the labeled cDNA probes were denatured in hybridization buffer at 100 °C for 10 min, then -20 °C for 3 min, added on tissues and coverslipped at 42 °C overnight. Sections were washed with 2 × SSC, 1 × SSC, 0.5 × SSC and buffer I, incubated in NSS at 37 °C for 30 min, and then Dig-Ap (1:500) for 2 h, and finally detected with NBT/ BCIP of Dig DNA labeling and detection kit. Diagnosis was made by blue colorat ion with varied intensities and compared with control sections. All results were analyzed by χ2 test. 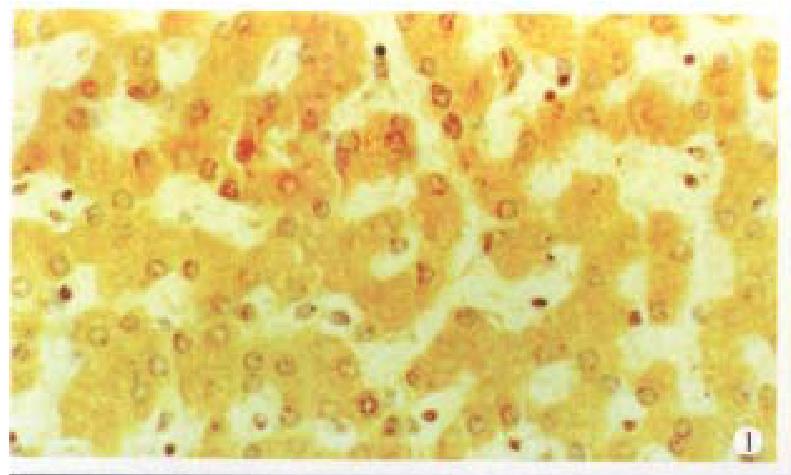 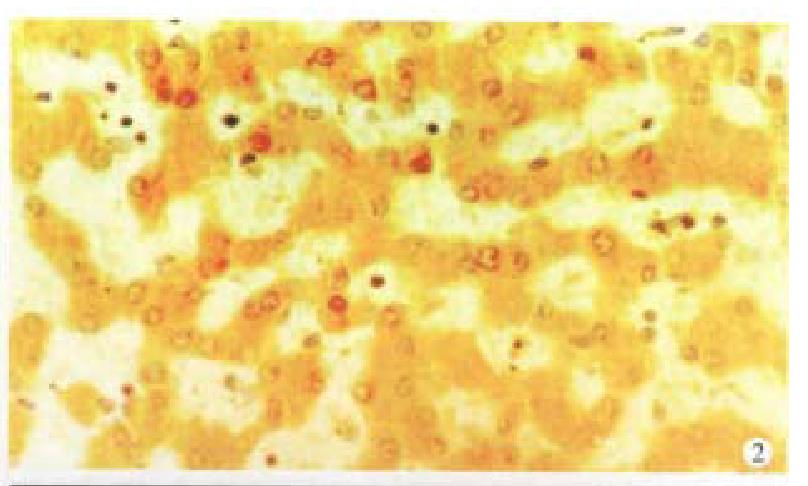 In contrast, a clear difference was noted between that in normal tissue and in the HCC, the Cx32 and Cx43 positive spots decreased in the latter especially in grade III HCC, only 18.2% (Cx32) and 12.1% (Cx43) specimens exhibited very weak stainings. The expression of Cx32 and Cx43 proteins in normal liver tissue and I, II and III HCC grades were significantly different (P < 0.01) (Table 1). 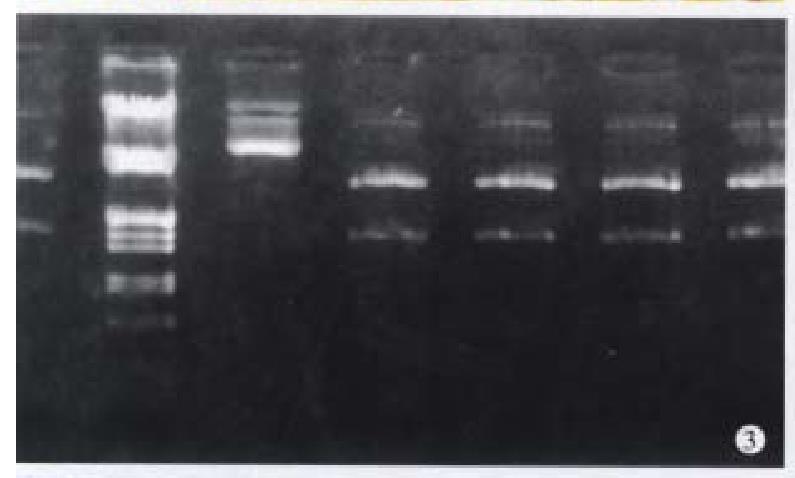 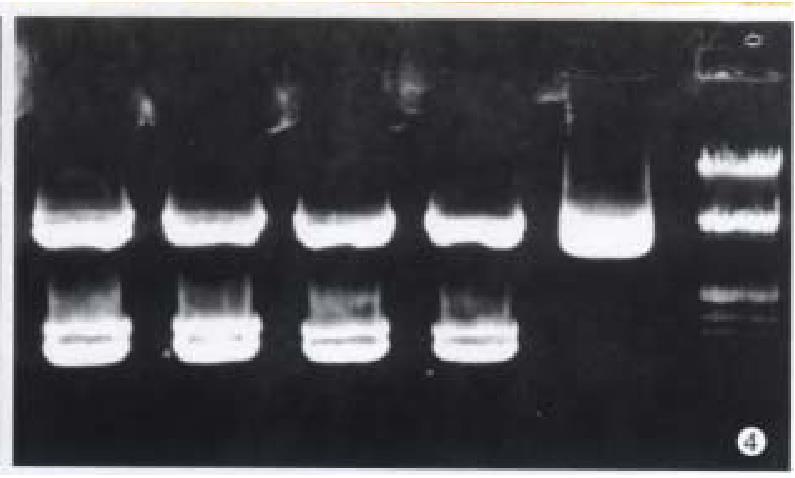 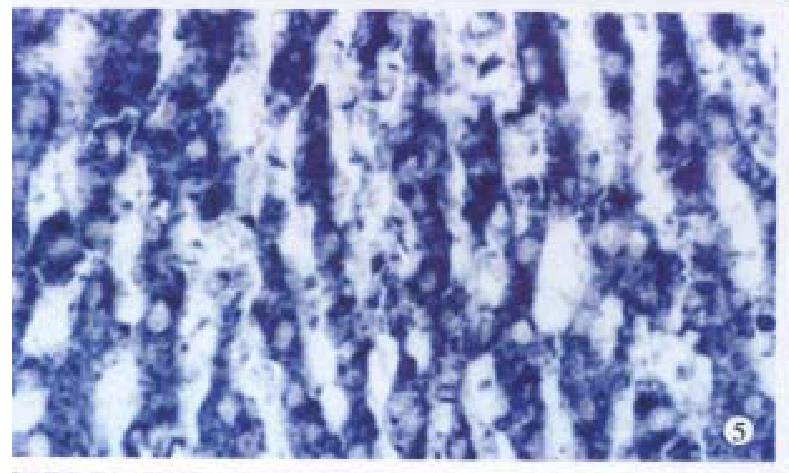 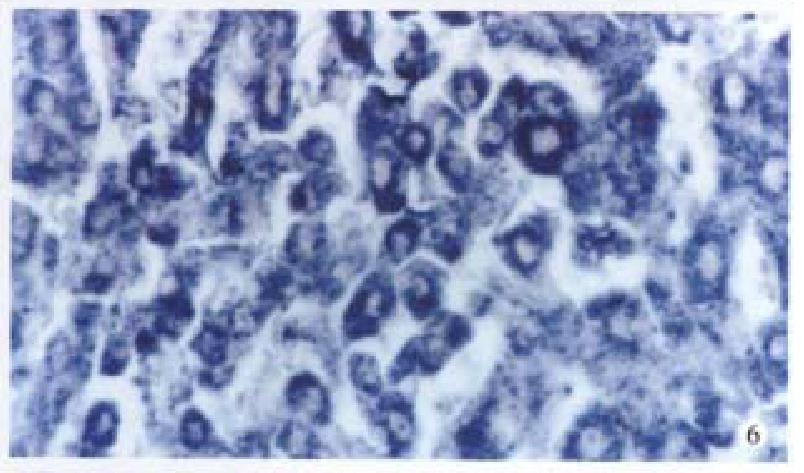 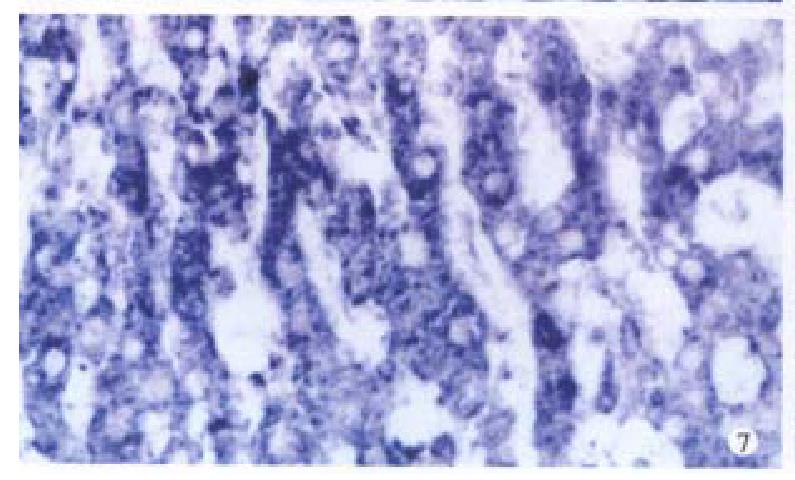 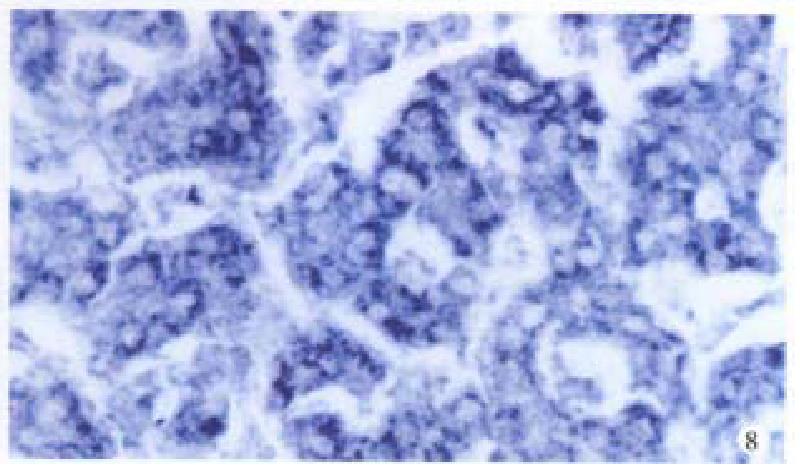 Since the first cloning of cx gene in 1986, there have been rapid progress in identifying and characterizing a multigene family (including at least 13 members ) which codes the gap junction proteins[3]. The cloning sequence of cDNA shows that there is a highly homogenic and strict gene structure among these family members.

The expressions of cx genes in different tissues are specific. GJIC plays an important role in the rapid progress of cell society. Gap junctions contain channels that connect contacting cells, and have an apparent selectivity based principally on molecular size, allowing the movement of molecules smaller than Mr 1000, such as cAMP, but preventing the movement of proteins or nucleic acids.

Gap junction mediated GJIC has been postulated to be an important mechanism to maintain tissue homeostasis and to control growth and differentiation. The decreased level of GJIC has been found in many kinds of tumor cells, and this can be important in neoplastic progression by allowing tumor cells to escape local control mechanisms[4].

Cx32 is widely expressed in many tissues, especially in normal liver, Cx43 is also involved in the gap junctional pathway in liver. This study revealed that Cx32 protein and Cx43 protein expressed at a high level in normal liver and even in pericancerous liver tissues, but at a decreased level in HCC tissues. The lack of Cx32 and Cx43 proteins reduced the number of GJIC between HCC cells and surrounding non-tumorous cells, finally resulting in progression of hepatocar cinogenesis.

In some studies, Cx43 protein was not detectable in normal liver, but could be found in HCC cells. These results suggested that certain tumors or transformed cells have normal levels of gap junction or GJIC and lack of functional gap junctions is not a general feature of maligancy[5], the exact mechanisms remain to be elucidated.

Because there was no decrease in levels of cx32 mRNA and cx43 mRNA in HCC and normal liver tissues, the aberrant localization of Cx32 and Cx43 might be responsible for the reduced GJIC in HCC[6]. It appears that the control mechanisms of cx32 and cx43 genes transcription are not affected during human liver tumorigenesis.

Not any mutation in the coding sequence of cx genes from any of the human tumors has been found. It is likely that the aberrant location of Cx32 and Cx43 in HCC cells is due to disruption of the mechanisms for construction of these proteins into gap junction plaques rather than to structural abnormality of the Cx32 and Cx43 themselves. The possibility is that there is defect in post-translati onal processing of Cx32 and Cx43 proteins, which may be essential for their tran sport to membrane. Post-translational phosphorylation[7] may be the imp ortant factors controlling the GJIC mediated by Cx32 and Cx43 in HCC, it is also responsible for the assembly or function of these proteins.

In conclusion, the aberrant localization of Cx32 and Cx43 proteins in HCC is no teworthy, which has direct biological significance in the process of hepatocarc inogenesis. Recent results demonstrate that the cx gene family is a class of non-mutant tumor-suppressive gene[8], it should be regarded as an effectual marker of early diagnosis or treatment for liver cancer.