Endogenesis infection plays an important role in nosocomial infection[1-3]. By studying progress of bacteria translocation from intestinal tract, the concept of gut origin infection has been accepted gradually[4-6]. Because of no ideal tracing method, there were some controversies. In order to solve the problem, the PUC19 plasmid vector tracing method with restriction map analysis and fluorescence labeling method were used to study gut-origin bacterial translocation. According to the characteristic of PUC19 plasmid, a special animal model was designed and two methods were compared.

PUC19 plasmid vectors (Promega): amplification of plasmid was in LB culture medium containing 100 mg/L ampicillin. Fluorescence- labeling bacteria: 1/10000 acridine orange was added in culture fluid of EcoR CMCC 44102. The cells were grown in broth overnight at 37 °C. Restriction DNA endonucleases: Hind III, EcoR I (Promega Co.). Plasmid was isolated asdescribed by Kado et al[3]. A total of 110 male Wistar rats, weighing 226 g ± 64 g were used. The animals were divided into PUC19 plasmid group and fluoresc ence-labeling one. The animals in fluorescence labeling group were sacrificed and examined at 4, 12, 24 and 48 h postburn with 10 rats at each time point, the normal control group contained 10 rats, with a total of 50 rats. The rats in PUC19 group were treated the same as those described above, another 10 rats were added at the time point of the 12th day postburn.

Fluorescence labeling group: 1012/L fluorescence-labeling E.coli were introduced into the stomach of rats by gastric tube. After 8 hours the a nimals had 30% TBSA (total burned surface area) full thickness burns. 3 mL/100 g body weight saline was injected into rat’s abdominal cavity for anti-shock. The rats were sacrificed at 6, 12, 24 and 48 h after burn. Mesentery lymph nodes (MLN), liver and subeschar tissue were collected by aseptic technique. The homogenates were divided into two parts, the first part cultured for enumerating m icroorganisms and second part examined under fluorescence microscope.

PUC19 plasmid tracer group: before burn, animals drank 300 mg/L ampicillin fluid for 3 days to “clean up” the intestinal tract. The PUC19 plasmid vector was introduced into the stomach by way of gastric tubing. Then the animals were again given ampicillin fluid (100 mg/L ampicillin) and examined to confirm whether PUC19 plasmid vector had colonized in the rat’s int estinal tract. The animals were inflicted with 30% TBSA third degree burn and sacrificed at 6, 12, 24, 48 h and 12 d postburn. The methods were the same as those described above. Homogenates of mesenteric lymph nodes, liver, and subeschar tissues were incubated in LB broth containing 100 mg/L ampicillin (18 hours) at 37 °C with shaking at 50 min-1-100-1 rpm.

Plasmid isolation of the bacteria was made according to Kado’s method. The product was digested 1h at 37 °C by restriction enzymes EcoRI and Hind III. 10 g/L agarose gel with well sufficient to accommodate 40 μL samples was prepared and the gel was stained with ethidium bromide. Photographs of gel were taken and positioned over an ultra-violet (UV) ray source.

Labeling bacteria were found to pass through damaged intestinal mucosal barrier and escaped from cleansing effect of liver and lymph nodes and finally reached the subeschar area. 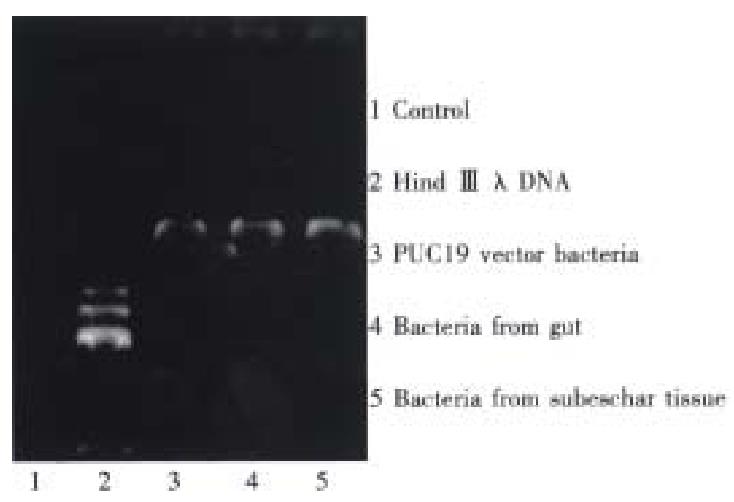 In recent years, more and more studies in gut-origin infection have been report ed. Gut-origin infection as an important way of infection in burn had been established. But there were still some disputes about its verification by tracing methods[7-15]. In the past, these included the fluorescence and isoto pes labeling methods. PUC19 plasmid was constructed in the 1980s, and was used e xtensively in molecular cloning and discrimination of gene recombination[16]. The characteristics of the PUC19 plasmid were: ① plasmid vector carried ampicillin resistance gene; ② the plasmid possessed polyclonal restrictione ndonuclease sites, panning positive bacteria became easier to be discriminated; and ③ it lacked nic/bom site, hence gene transduction from conjugate of bacteria was impossible. These features indicated that PUC19 plasmid could be an ideal tracer for studying endogenous bacterial translocation.

Comparing the results of the two tracing methods used in our experiment, we could find the positive rate of fluorescence- labeling organisms was higher than that by PUC19 plasmid tracing method in bacteria reaching mesenteric lymph nodes and liver after serious burn. Because many factors can cause nonspecific reaction in fluorescence-labeling method, some false positive results may be present, but we think that fluorescence-labeling bacteria tracing method is still useful for gut bacterial translocation study, although not for quantitation study and long period study.