CD44 was originally implicated as a “homing” receptor directing the migration of recirculating lymphocytes[1]. CD44 expression has been confirmed not only in lymphocytes but also in a wide variety of epithelial tissues. It is considered as an important cell adhesion molecule for cell to cell interactions[2]. Molecular cloning and analysis of the genetic structure have revealed that the CD44 gene has at least 19 exons, of which 12 can be alternatively spliced to make up a wide variety of CD44 splice variants which have been found in various types of human malignancies and have been considered as a marker in tumor progression and metastasis[3]. We analysed the expression of aberrant CD44 transcripts with RT-PCR method in gastric carcinomas, and discussed the clinical significance of metastasis-related CD44v gene.

Fresh tissue specimens including normal gastric mucosa, gastric tumor and mucosa adjacent to tumor were tissues taken from 20 patients with gastric cancers who underwent surgical treatment in the Department of General Surgery in our hospital from November 1997 to February 1998. The diagnosis was confirmed before operation, by endoscopic and pathological examinations. The normal mucosae were taken from mucosae 10 cm away from carcinomas, and the adjacent tissues 2 cm away from the carcinomas. The specimens were derived in 30 min after surgical resection, and were frozen in liquid nitrogen prior to store below-70 °C.

Primers sp1 and sp2 were taken from the cDNA sequence described by Matsumura[4]. sp1: 5’GACACATATTGCTTCAATGCTTCAGC3’, sp2: GATGCCAAGATGATCAGCCATTCTGGAAT3’, pointing to part of exons of standard CD44s, the amplified product was CD44s; primer p1 and p2 were taken from No.1 and No.5 exons in human cDNA sequence described by Hofmann[5], p1: 5’GACAGACACCTCAGTTTTTCTGGA3’, p2: 5’TTCCTTCGTGTGTGGGTAATGAGA3’,pointing to the abnormal splice variants of CD44 gene containing v7 exon, the amplified product was CD44v. The two couples of primers were both synthesized by SAGON Co, Canada, kits and TaqDNA polymerase were purchased from PE Co. USA.

Total RNA extraction was prepared according to AGPC single-step method[6]. RT-PCR: model RNA 3 μL, down primers (sp1, p1) 2 μL (25 pmol) and 2 μL AMV-RTase were put into 20 μL reaction system to synthesize cDNA. Putting 10 μL cDNA into a reaction tube, the primers sp2, p2 and 2 μ TaqDNA polymerase were added, then the amplification happened in 50 μL reaction system. The conditions of PCR reaction was 94 for 50”, 52 for 50” and 72 for 1’33” undergoing 35 cycles. For negative controls, template cDNA was not added to the reaction mix. The amplified product was electrophoresed in a 2% agarose gel, observed and photographed with ultraviolet radiography.

Data were analyzed for Fisher exact examination by running statistical software SPSS for Win95. P value was set at 0.05 for statistical significance.

Amplified with sp1 and sp2 as primers, the CD44s specific 482 bp product was obtained from all the gastric cancers, the adjacent tissues and normal gastric mucosas (Figure 1). 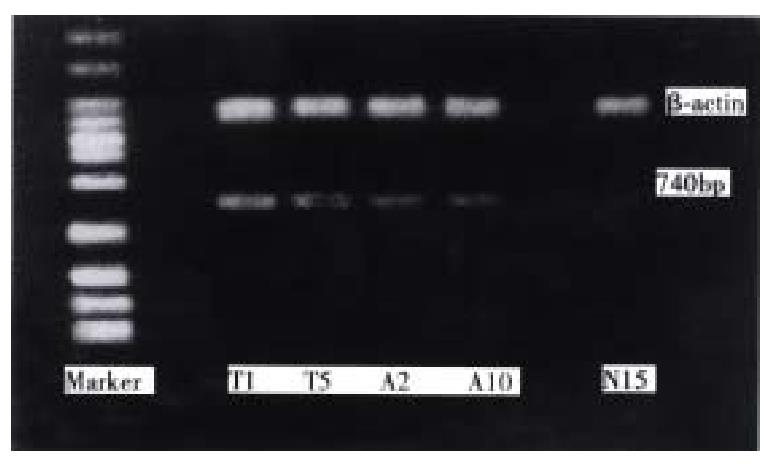 The relationship between the biological behaviors of gastric cancer and CD44v mRNA expression is presented in Table 1.

As an adhesive molecule, CD44 exists on the surface of cells. The NH2-terminal function area of CD44 can join the hyaluronate in the basement membrane to extracellular matrix, thus to regulate the movement and function of cells. By this mechanism, neoplastic cells can adhere itself to the extracellular matrix and basement membrane of the host cell, resulting in invasion and metastasis of malignancy. On the other hand, the degrated products of hyaluronic acid can motivate the growth of local vessels providing the basis for invasion and metastasis. This variated CD44v is a promising marker in diagnosing gastric cancer clinically[4,7].

We have got similar result to Yokozaki’s. The expression rate of CD44v in gastric tissue is up to 80% with difference between two types of gastric cancer, but not high in the adjacent tissue and normal mucosa. It shows that the variant expression of CD44v is related to the phenotype of gastric malignancy, and may serve as a useful indicator in tumor metastasis, and have potential significance in diagnosing gastric cancer.

The formation and metastasis of gastric cancer are related to the abnormal expression of onco-gene (c-erb2, c-myc, ras) and suppressor onco-gene (p53). CD44’s abnormal expression may be an earlier event than that of ras, p53 and other genes, and may be related to the activation of ras gene. The mechanism in promoting the formation of cancer cell and metastasis may probably be related to the function of CD44. The cancer cell with CD44v expression may get lymphocyte’s guise so as to escape the recognition and execution from human immune system and e asily invades lymph node, resulting in metastasis[9].

Our results show that 16 of 20 gastric cancer specimens and 5 of 10 adjacent tissue specimens had positive CD44v expression, and none of the normal munosa had CD44v expression (Chi-square χ2 = 17.160, P < 0.05). There was no statistical significance as comparing the former two with the normal mucosa. The CD44v expression rates in two types of gastric cancer were different sig nificantly (P < 0.05), the rates were also markedly different (P < 0.05) in cases with or without lymph node metastasis. Expression of CD44v mRNA was related to the genesis and prognosis of gastric cancer, and is one of the biological markers indicating metastasis and poor prognosis. However the expression of CD44v had nothing to do with clinical stage or size of the cancer. Considering the limited data available, further investigations are needed.

No specific strand was discovered in the 20 cases of normal gastric mucosal tissues, Northern blot-hybridization method has also been used for CD44 variant gene expression product in different tumors, i.e. gastric cancer, lung adenocarcinoma, colon cancer and esophagus cancer tissues. However, the method is less sensitive than RT-PCR method, it is also time-consuming and needs large quantities of RNA and tissues. RT-PCR technique can be used to detect CD44 gene’s variant expression product rapidly with a tiny amount of tissues in batches, so it is highly valuable in clinical practice. False negative result is possible if only RT-PCR is used for detecting CD44, thus further researches are needed to improve the detecting sensitivity, when RT-PCR with Southern blot-hybridization technique or semiquantitative density technique are used in combination.