AIM: To study the relationship of lmp2 and DR3 genes with type I diabetes mellitus.

METHODS: lmp2 genotypes and DR3 were identified in 68 patien ts with type I diabetes mellitus (I-DM) and 71 healthy controls. Then, I-D M patients and controls were respectively allocated into DR3-positive and DR3- negative groups. The frequencies of lmp2 and DR3 gene in random subjects, an d lmp2 genotypes in DR3-matched subjects were compared between I-DM patie nts and controls. At the same time, I-DM patients were divided into 3 groups b ased on the onset age of diabetics: group A ≤ 14 years, group B 15-30 years and group C ≥ 31 years.

Type I diabetes mellitus ( I-DM ) is an autoimmune disease due to insufficient insulin secretion resulting from immunologically mediated destruction of pancreatic beta cells. Previous studies suggested that some genes (including DR3 gene) within Major Histocompatibility Complex (MHC) class II region determined the susceptibility to I-DM in other populations[1-4]. We investigated the relationship of DQA1 and DQB1 with I-DM[5,6], in south China Han population. However, the relationship between DR3 and I-DM has not yet been studied. lmp2 is another gene locus within MHC class II region, its polymorphism site is at R/H-60. When the amino acid at position 60 is arginine (R) or histidine (H), the allele will be lmp2-R or lmp2-H. lmp2-has 3 genotypes, i.e., lmp2-R/R, lmp2-R/H and lmp2-H/H. The r elationship between lmp2 and I-DM is still controversial. This study aims at investigating the relationship of lmp2 and DR3 gene with I-DM in south China Han population.

Sixty-eight I-DM patients and 71 healthy persons (as controls) were included in this study. All the subjects were Han population without relatives from southern China. The controls were the healthy persons having no family history of autoimmune or hereditary diseases. The diagnosis of I-DM was based on 1985 WHO criteria. Both IDM patients and controls were subdivided into D R3 positive and DR3-negative groups. The I-DM patients were divided based on the onset age of diabetics into 3 groups: group A ≤ 14 years, group B 15-30 years and group C ≥ 31 years.

DR3 gene was identified by the nested-PCR[7]. First, the exon2 of DRB1 was amplified from genomic DNA, and the PCR primers were exon2. 1, 5’-CCGGATCCTTCGTGTCCCCACAGCAC-3’ and exon 2.2, 5’-TCGCCGCTGCACTGTGAAG-3’. Then, DR3 gene was amplified from exon2, the PCR primers were DR3.1, 5’-TACTTCCATAACCAGGAGGAGA-3’, DR3.2, 5’-TGCAGTAGTTGTCCACCCG-3’.The primer amplifying DR3 was used to amplify all the alleles (except for DR10) within exon2 of DRB1 to justify its specificity.

Hha-I digestion of PCR production The reactive volume 20 µL contained 10 µL of PCR product, and 10 µ of Hha-I ( Gibco ). The samples were incubated in warm water bath at 37 °C overnight. The allele lmp2-R contained the Hha-I site, however, the lmp2-H did not. Therefore, the polymorphism of lmp2 can be revealed by Hha-I. When Hha-I digestion was performed, the PCR products with known lmp2 genotype were used as controls.

Genotyping of lmp2 and identification of DR3 gene Figure 1 shows the DR3 gene by nested-PCR. Figure 2 shows the various genotypes of lmp2 and the product of PCR. The identification of DR3 was made twice in 90 samples, getting 99% (89/90) precision. Genotyping of lmp2 was performed twice in 70 samples with 100% coincidence. The primer amplifying DR3 and Hha-I digestion had excellent specificity. 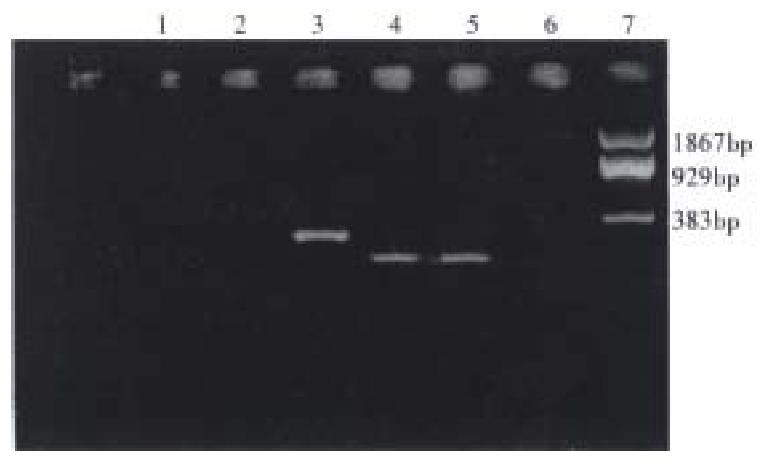 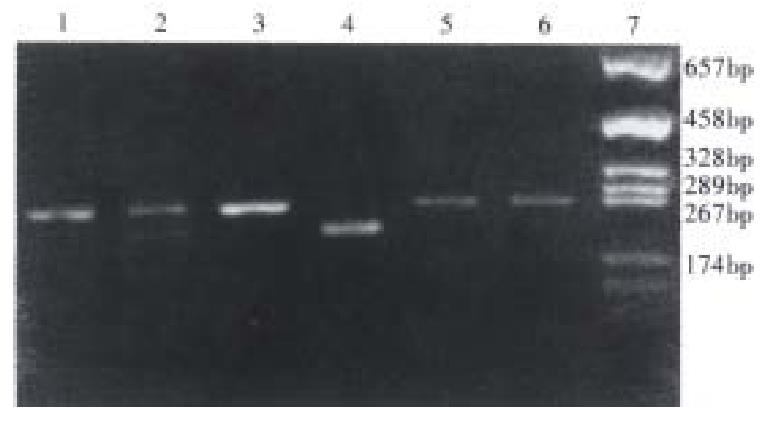 Distribution of lmp2 in DR3-matched subjects

In DR3-negative subjects The frequency of lmp2-R/H in I-DM patients was significantly higher than that in controls, while lmp2-R/R and lmp2-H/H had no significant differences between these two groups (Table 2).

There were no significant differences in lmp2 frequencies among different groups of diabetic onset age (Table 3).

The relation between DR3 and I-DM Previous studies showed that DR3 is one of the susceptible genes of I-DM in some populations[1]. We studied the Han population in south China, and found that the frequency of DR3 in I-DM patients was significantly higher than that in controls. It su ggests that DR3 may be one of the susceptible genes of I-DM, and the persons with DR3 have a higher risk of suffering from I-DM.

Relation between lmp2 and I-DM The lmp2 encoded product is LMP protease, which is responsible for processing antigen, and may play a n important role in antigen presentation[8]. Therefore, lmp2 may be an attractive candidate as a gene related with susceptibility to I-DM. Studies on the relation between lmp2 and I-DM were still controversial. A recent study by Deng et al[9] suggested that lmp2-HR may be the protective genotype, and lmp2-R/H the susceptible genotype of I-DM, an d they may have no linkage disequilibrium to HLA-DR/DQ. Undlien et al[10] divided the subjects into many subgroups according to HLA-DRB1-DQA1-DQB1, and found that lmp2 genotypes had no association with I-DM, but, the samplesize was too small after divided into subgroups. The studies by Van End ert et al[11], Kawaguchi et al[12] and Chauffert et al[13] yielded the similar results.

Our data indicated that, in random subjects, the frequencies of lmp2-R/R and lmp2-R/H in I-DM patients were significantly lower, and higher than those in controls respectively (Table 1). Therefore, lmp2-R/R may be the protective genotype, and lmp2-R/H the susceptible genotype of I-DM. In order to make sure that the effect of lmp2 on I-DM will be affected by DR3, we investigated the frequency of lmp2 genotypes in DR3-matched subjects. We divided the subjects into DR3 positive and DR3 negative groups and compared the frequencies of lmp2 genotypes between I-DM and controls respectively in these groups, and obtained nearly the same results as those in random subjects (Table 2). Therefore, our data suggested that the relationship between lmp2 and I-DM may not be affected by DR3 gene. However, we have not study the relationship between lmp2 and other protective and susceptible genes of I -DM within MHC class II region, so we can not confirm whether lmp2 genotype s have independent effects on I-DM or not. Nevertheless, our data show that lmp2 genotypes can predict the risk of I-DM occurrence. The persons with lmp2-R/R have a decreased risk, and those with lmp2-R/H a increase d risk of suffering from I-DM.

Relation among lmp2 genotype, DR3 gene and the onset age of diabetics Recently, many studies have shown that I-DM is a heterogeneitic disease. The study by Caillat-Zucman et al[8] showed that DRB1, DQA1 and DQB1 were not only associated with the predisposition to I-DM, but also with the onset age of diabetics, and the younger the onset age of diabetics, the higher the frequencies of these genes. Some recent studies by my colleagues show ed the same results in DQA1 and DQB1[9,10]. This study also indicated that DR3 was associated with the age of onset in I-DM and the frequency of DR3 in patients with I-DM developed in childhood ( ≤ 14 years) was significantly higher than that in adulthood ( ≥ 15 years), suggesting that the persons with DR3 may have an earlier diabetic onset.