Anatomical structures that create reservoirs for stagnant intestinal contents are a characteristic feature of common inflammatory disorders such as diverticulitis and appendicitis. Intestinal diverticula, surgically constructed blind loops and pouches, obstructing carcinomas of the colon, and Hirschsprung’s disease are accompanied by chronic inflammatory changes in the intestine, and are occasionally associated with mucosal ulceration followed by massive bleeding. These diseases are etiologically associated with disorders characterized by intestinal stasis and/or an altered fecal stream, resulting from “cul de sac” structures (blind loop or pouch) in the intestinal tract, bowel obstruction or impaired motility. Furthermore, some of these chronic inflammatory conditions appear to exhibit similar pathological features, such as ischemic colitis. Although these inflammatory changes have been described individually, often as case reports, relatively little attention has been devoted to the overall clinical impact of these diseases and to understanding the pathophysiology of disease initiation and progression. Studies in our laboratory and by others have provided novel insights into the molecular and cellular basis for the intense inflammatory responses that are associated with intestinal stasis. This review summarizes the findings of these studies and provides a unifying theory to explain the inflammatory responses that result from intestinal stasis.

Whereas most intestinal ( duodenal, jejunal, Meckel’s, and colonic ) diverticula remain asymptomatic, gastrointestinal bleeding is the most common complication, associated with mucosal ulceration[1-4]. Meckel’s diverticulum, located on the antimesenteric border of the ileum, is the most common congenital a nomaly of the gastrointestinal tract. Although ulcer formation in Meckel’s divertic ulum is generally thought to result from ectopic gastric tissue, all of the cases cannot be explained by acid production from the functioning gastric mucosa[2]. The diagnosis of gastrointestinal bleeding due to diverticula of the sm all bowel is difficult, because neither the symptoms nor physical finding are specific and endoscopic observation is hampered by the length of the intestine. Surgical resection of the involved segment of the intestine is the treatment of choice for the diverticula identified as a source of gastrointestinal hemorrhage[1].

The terms “blind pouch” or “blind loop syndrome” represent the complications resulting from a stagnant intestine that are usually created by a side-to-side anastomosis with or without bowel resection, respectively. In cases of this syndrome, diarrhea and occult intestinal bleeding are usually found as well as sym ptoms resulting from malabsorption[5-9]. Shallow and longitudinal ulcer ations are occasionally observed in the resected blind intestine, similar to those of ischemic enteritis[5,6]. Bacterial overgrowth in the blind loop has been presented in experimental models of animals[8,9]. While this syndrome is now rare because the safety of an end-to-end anastomosis has been established, the pathological features of this condition may provide important insights concerning the linkage between intestinal stasis and the resulting inflammatory response.

The term “obstructive colitis” was originally used to define the ulcerative inflammatory lesions that occur proximal to the colonic lesion and which is partially or potentially obstructive rather than completely obstructed[13-16]. Complications include peritonitis, perforation, and breakdown of anastomoses made through involved segments of the colon that may appear externally normal at surgery[13,15]. The inflammatory response associated with colonic obstruction exhibits a variety of pathological features, including ischemic[13-16], acute necrotizing[17], or pseudomembranous colitis[18], resulting in confusion about the definition of this disease[14]. The are a of colitis is usually mildly dilated with moderate thickening of the wall. Thus, it is characteristically distinguished from marked distension of the bowel that is associated with thinning of the wall and transmural necrosis caused by an increased intraluminal pressure, followed by acutely developing arrest of the intramural circulation[13].

Enterocolitis associated with Hirschsprung’s disease, which can induce perforation and/ or systemic sepsis, remains a major source of morbidity and mortality, both before and after definitive surgical treatment[19-22]. The risk of postoperative entero colitis is significantly increased by mechanical factors related to anastomotic stricture and intestinal obstruction[21,22], possibly eliciting a delayed intestinal transit. Crypt abscess, intraluminal fibrinopurulent debris, or mucosal ulceration are histologically observed[19,20]. The etiology of enterocolitis is uncertain; ischemic and bacterial causes and recently, rotavirus infections, have been suggested[23,24].

While much attention has been devoted to defining the relationship between enteric bacteria and the pathogenesis of inflammatory bowel disease (IBD), it remains unclear whether intestinal stasis, resulting in overgrowth of enteric bacteria, contributes to the development of IBD. However, there are several interesting published observations that suggest the linkage between intestinal stasis and the pathogenesis of IBD. A previous study showed evidence that the recurrence of Crohn’s disease in the neoterminal ileum after curativeileal resection is dependent on intestinal transit[25]. Although ulcerative colitis ( UC ) has been described as a continuous inflammatory process starting from the rectum, isolated inflammatory changes can be observed in the periappendicial area of a number of patients with left-sided UC[26,27]. In recent epidemiology-ba sed studies, the risk of progression of UC was significantly lower after previous appendectomy[28,29].

Although peptic ulcers (gastric or duodenal) have been extensively studied, the mechanisms underlying the ulcerative inflammatory changes in the stagnant intestine, where acid from the stomach has already been neutralized, remains poorly characterized. Many of the features of the disease suggest an ischemic origin, which cannot be explained by atherosclerotic obstruction of the feeding arteries. Microvascular dysfunction, due to hypoperfusion following raised intraluminal pressure, has been assumed to account for the mucosal ischemia[13]. Contribution of enteric bacteria has also been suggested, based on the observati on that treatment with oral antibiotics can often relieve clinical symptoms induced by these diseases[10-12,30,31].

Leukocyte-endothelial cell adhesion is now recognized to represent an early and rate-limiting step in the leukocyte infiltration and accompanying tissue injury associated with acute or chronic inflammation. There is also evidence that adherent and activated leukocytes produce microvascular dysfunction by occluding microvessels, damaging endothelial cells and increasing vascular protein leakage[32,33]. Leukocyte-endothelial cell adhesive interactions, such as rolling, firm adhesion, and transendothelial migration, represent a highly coordinated process that is governed by a number of factors, including the expression of specific adhesion glycoproteins, physical forces generated within the microc irculation, and inflammatory mediators released by a variety of activated cells[32-37]. The pivotal role of endothelial cell adhesion molecules (CAMs) in regulating leukocyte recruitment has been demonstrated in different models of gastrointestinal and liver inflammation using either blocking monoclonal antibodies directed against specific CAMs or mice that is genetically deficient in one or more endothelial CAMs[34,35]. The β2 subfamily of integrins (CD18) are expressed on leukocytes and these integrins firmly bind to glycoproteins of the immunoglobulin superfamily, such as intercellular adhesion molecule-1 (ICAM-1) and ICAM2, which are expressed on vascular endothelium. ICAM-1 is constitutively expressed on the surface of en dothelial cells and this expression can be enhanced by endotoxin or cytokines[36,37].

Our previous study, which employed surgical procedures to improve cecal stool flow in the rats[38], represented the first attempt to address the issue of how intestinal stasis results in an inflammatory response. The findings of this study indicate that intestinal stasis is associated with an increased expression of ICAM-1 on endothelial cells and granulocyte infiltration. This study also suggested that it be the bacterial load of a stagnant intestine that determines the activation of mechanisms leading to infiltration of inflammatory cells, based on the responses noted in animals receiving oral antibiotics. This view is supported by a previous study, in which pretreatment with metronidazole inhibited the leukocyte-endothelial cell adhesion in rat mesenteric venules elicited by indomethacin or leukotriene B4[39].

A definitive explanation concerning how enteric bacteria enhance ICAM-1 expression on endothelial cells in the stagnant intestine is not readily available. How ever, our recent work on germfree mice demonstrated that the expression of ICAM -1, but not other endothelial CAMs such as ICAM-2, vascular cell adhesion mole cule-1 (VCAM-1), or E-selectin, is altered by germfree conditions[40]. The ICAM-1 specificity of this response argues against a role for systemic levels of bacterial endotoxin or tumor necrosis factor-α released from macrophages, which are powerful stimuli for VCAM-1 and E-selectin as well as ICAM -1[34], as mediators of the response. There is a growing body of evidence, derived from germ free animals, that enteric microflora contribute to the basal level of activation of the immune system, such as antibody-forming potential, phagocytosis, T-cell population and responsiveness to cytokines[41-47]. As illustrated in Figure 1, some unique factor that is normally released from enteric bacteria promotes the increased constitutive expression of ICAM-1 in the intestinal microvasculature. Events associated with an altered enteric microflora, such as intestinal stasis or an altered fecal stream, are likely to affect the amount of this bacteria- derived factor that regulates ICAM-1 expression. In doing so, the enteric bacteria can exert a profound influence on the trafficking of leukocytes in the intestinal microcirculation. As intestinal stasis and overgrowth of enteric bacteria are associated with increased I CAM-1 expression, subsequently affecting leukocyte-endothelial cell adhesion, it is tempting to speculate that the ischemic and inflammatory changes observed in the several disorders associated with intestinal stasis may have share a commonunderlying mechanism that largely explains the ulcerative inflammatory lesions. 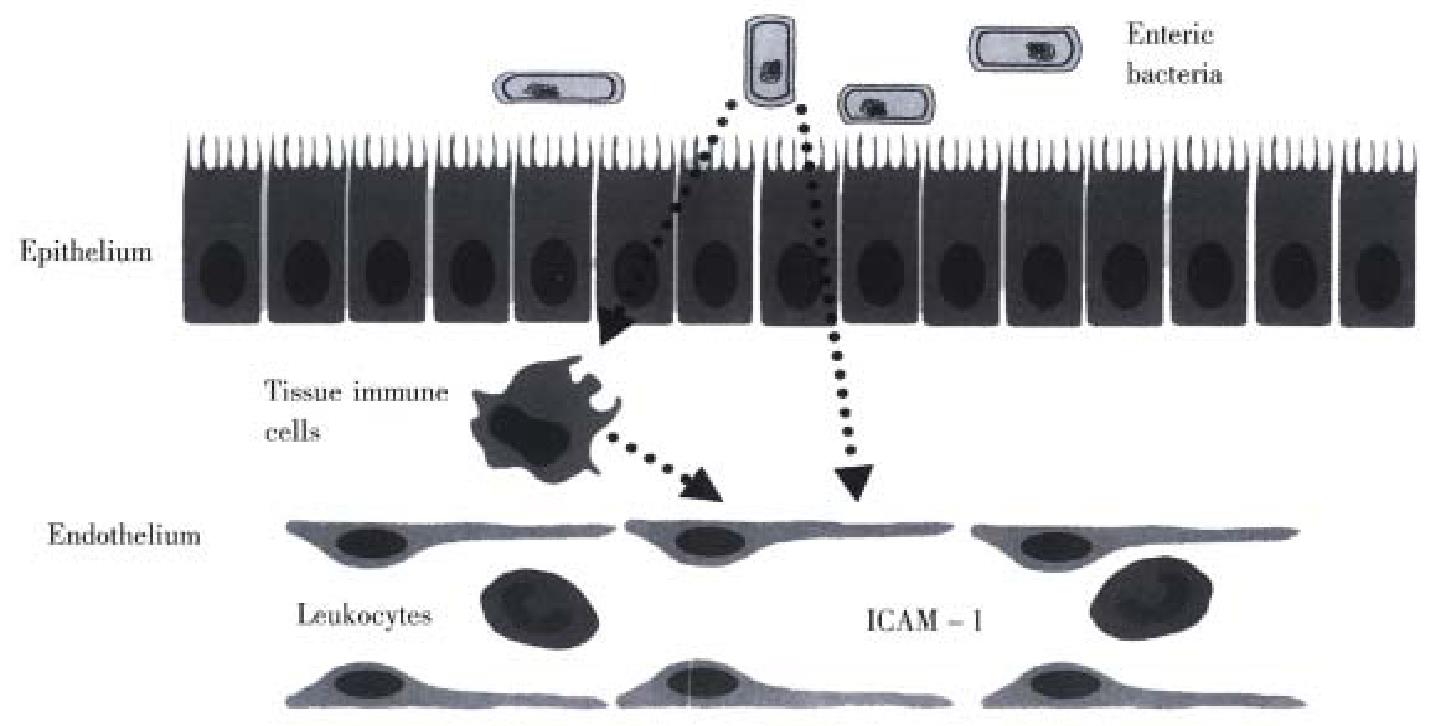 Figure 1 Mechanism underlying the influence of enteric bacteria on ICAM-1 expression on endothelial cells of the intestinal vasc ulature. Intestinal stasis likely causes an increased production bacterial factors that promote ICAM-1 expression and consequently enhances the recruitment and activation of leukocytes in the intestine.
Footnotes