In order to determine whether Fas antigen plays a role in the gastric carcinogenic sequence, an im-munohistochemical study of Fas antigen expression in gastric carcinoma and its relation to clinical status, pathomorphological parameters and prognosis was carried out and reported below.

Fifty-nine cases of surgically resected gastric carci-nomas (male 37, female 22; mean age 55.6 years) were selected from the files of the Department of Pathol ogy of our hospital. All blocks were fixed in 10% formalin and embedded in paraffin. Serial sections were cut from each block in 4 μm, HE stained and confirmed pathologically. All patients under-went curative resection, and followed up for 2.7 to 52 months.

Immunohistochemical staining for Fas antigen was performed using SP technique. S lides were deparaf-finized and then were hydrated and detected with immunotist chencal kit according to the mannal of the mountecturer. The sections were then counter-stained with hematoxylin. With each batch of test samples, a positive control consisting of a tissue section from liver was evaluated. A negative control was prepared for each sample using an irrelevant an-tibody of the same isotype as the primary antibody. The immunostaining of Fas antigen was visually classified into negative and positive groups.

Correlations between Fas antigen expression and clinicopathologic parameters were examined using Chi-square test. Survival data was analyzed by a log-rank test. P < 0.05 was considered to be statistically significant. 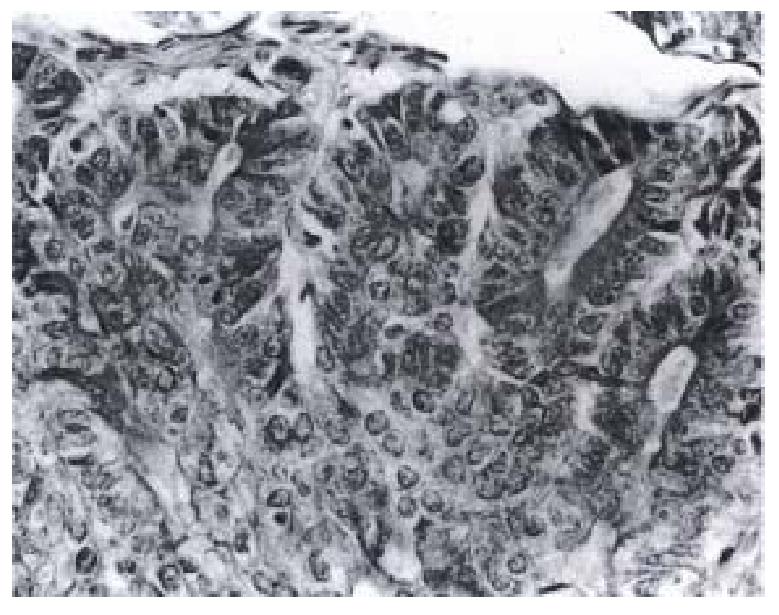 Fas antigen is a type I transmembrane protein, its molecular weight is 45000, and it belongs to the tumor necrosis factor/nerve growth factor receptor family[1]. Fas antigen as a receptor exists in the body and can induce a poptosis in target cells. In recent studies, Fas antigen expression has been identified in various human organs, e.g., heart, liver, lung, kidney, and ovary[2,3]. But, little is known about Fas antigen expression and its relationship with the biological behavior and prognosis of human gastric carcinoma.