AIM: To prepare 5-FU sodium alginate 125I bovine serum albumin nanoparticles (BSA NP), to de-termine the radioactive count in different organs of rats at different time points after oral adminis-tration of 5-FU 125I sodium alginate-BSA NP and to calculate the kinetic parameters of its metabolism.

METHODS: Emulsion solidification method was used to prepare 5-FU 125I sodium alginate-BSA NP, and to determine its diameter under trans-mission electronic microscope (TEM). Then the rate of NP and external drug releasing velocity were measured. Radioactive counting in different organs of rats wa s made after oral adminis-tration of the NP by GAMA Counter, and the ki-netic para meters of drug metabolism were calcu-lated by handling the data with the two-depart-ment model.

RESULTS: The average arithmatic diameter of the NP was 166 nm ± 34 nm, the rate of 5-FU was 32.8% and the cumulative external releasing ra-tio amounted to 84.0% within 72 hours. The NP was mainly distributed in the liver, spleen, lungs and kidneys after NP oral administration to rats. The mic ro-radioautographic experiment showed that NP was distributed in the Kupffers cells of liver, liver parenchymal cells and the phagocytes of spleen and lungs. The kinetic pa-rameters of matabolism were: T1/2 = 9.42 h, Cmax =2.45 × 107 Bq, Tmax = 2.18 h, AUC = 148 × 109 Bq.

Nanoparticle (NP) is an colloidal dispersion system, with diameters ranging from 10 nm to 1000 nm. The particles exist mainly in the organs rich in phago-cytes after absorption, such as liver, spleen and lymph system. Since its introduction in the 1980s, scientists have done a lot of researches on its preparation, stability and targeting[1,2]. Now most mate-rials used to prepare NP are synthetic substances, e.g. cyanoacrylate, methylacrylate and polylactic acid. However, we selected natural substances-sodi-um alginate and bovine serum albumin as carriers, and 5-fluorouracil (5-FU) as model drug to prepare NP by emulsion solidification, and studied its distri-bution after oral administration.

The BAS (10 mg) was dissolved in 10 mL distilled water and marked with I125 according to the chloro-amine-T method. After the reation was completed, the mixture was separated by column chromato-graphy (10 mm × 340 mm), using Sephadex G-50 as column material and Na2S2O3 as eluant. Then the radio-chemical purity of eluate was determined by dichloroacetic acid method.

Preparation of 125I sodium alginate-BAS NP

Determination of the diameter of nanoparticles

The NP size in the suspension was detected on TEM.

Determination of the encapsulation efficiency

The standard curve of 5-FU was drawn first. One hundred and five mg of 5-FU was weighed precise-ly, dissolved in thin HCL solution (9-1000) and adjusted to given volume. This solution was diluted to its half concentration. After 3.0, 6.0, 9.0, 12.0 and 15.0 mL-diluted solution were taken into 100 mL-volumetric flasks and adjusted to given volume respectively, their absorbance (A) values were detected on ultraviolet-visible spectrophotometer at 265 nm. The following regression equation was obtained: C = 16.72A± 0.0416 ( r = 0.9998).

A total of 1.0 mL 5-FU NP suspension was added accurately to a test tube with 9 mL 6 mol/HCl. The mixture was hydrolyzed for 20 h at 100 °C water bath. The hydrolyzate was adjusted to given volume with distilled water to detect its A val-ue as standard curve item, the hydrolyzate of bland NP suspe nsion served as control. The result showed that the control group had no obvious absorption at 265 nm (A = 0.01). By putting the A value into the regression equation we worked out the concentration of 5-FU in the hydrolyzate and got the encapsu-lation efficiency consequently.

The same quantities of albumin, sodium alginate and pentane dialdehyde as “Prep aration of NP” items were mixed with 5-FU weighed precisely, the mixture was dissolved in distilled water. Its A value was detected according to the standard curve and the content of 5-FU was calculated.

Appropriate quantity of 5-FU NP suspension was taken precisely, washed for three times with dis-tilled water, and suspended in 200 mL-thin HCL solution (9-1000). The drug release state of the sus-pension was measured at 37 °C by paddle method (100 r/min). The samples were taken at the beginning, the 2nd, 4th, 8th, 12th, 24th, 48th and 72nd hour, and filtered through 0.2 μm microporous membrane. The filter liquor was detected at 265 nm to get its A value and cumulative rate of drug release.

The distribution of 125I sodium alginate-BSA in rats

Fourty-five Kunming rats were divided into 15 groups (3 rats per group). After starvation for 16 h, the rats were given the 5-FU NP orally 148 × 108 Bq per rat. Right after its blood was taken from the eye at different time points (heparin was added to prevent coagulation), the rats were sacrificed by breaking its spine. The relevant tissues and organs were taken. When the water had been absorbed with filter paper after washing, they were weighed. The amounts of the NP in unit weight in different tissues were measured by GAMA Counter. In accor-dance with the counting result, we calculated the tissue blood ratio at different time points and used two-department model to process the data in order to get pertinent kinetic parameters.

While carrying out the histological experiment, we chose the tissues of liver, spleen, lungs, and kidneys at some time points (the 4th, 8th and 12th hour), and frozen sections and paraffin wax sections about 6 μm-thick were made. IV liquid emulsion was used for microradioautography.

After two batches of 5-FU NPs were hydrolyzed in acid medium, their encapsulation efficiency was calculated (Table 1).

The rate of recovery of three batches of samples is shown in Table 2. 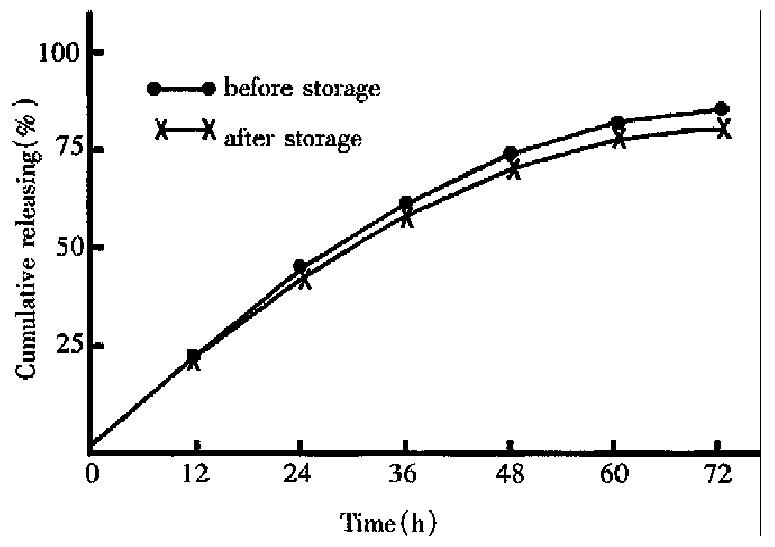 Figure 1 Releasing of 5-FU from NP.
The pharmacokinetics of 125I sodium alginate-BAS NP in rats

The data in the parentheses show the ratio of radioactivity of the relative organ to that of blood. The data in Table 3 were put into computer, and processed according to the two-department model to calculate the relevant pharmacokinetical parameters. The results are shown in Table 4.

The microradioautographical experiment indicated that the 125I sodium alginate-BSA NP were mainly distributed in the Kupffer cells of liver and liver parenchymal cells (Figure 2) after oral administration to rats. And there were Ag particles in the phagocytes of spleen (Figure 3) and also in the pulmonary cells (Figure 4). 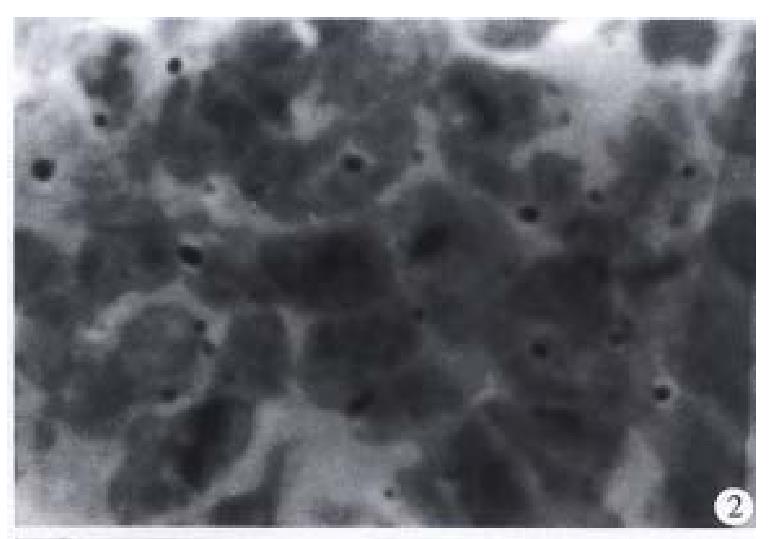 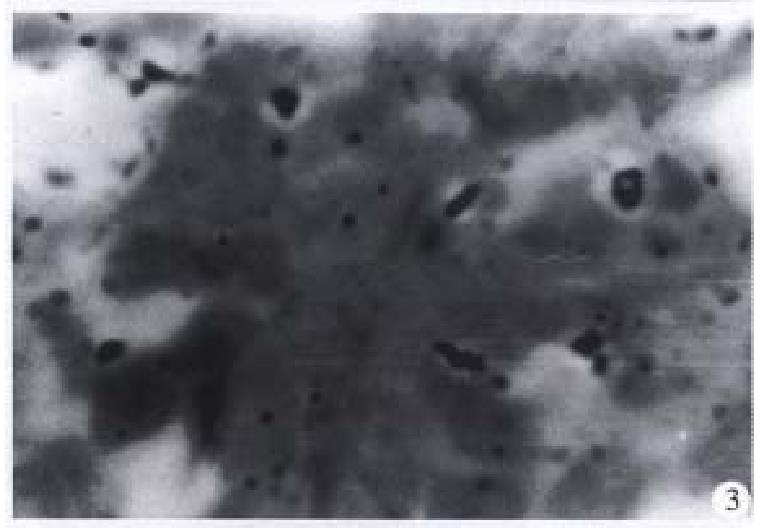 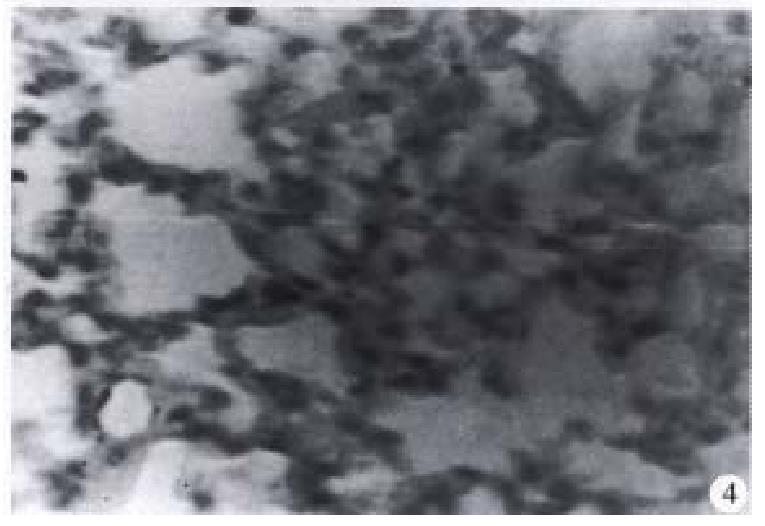 Since the introduction of NP in the early 80s, scientists have done a lot of researches in its preparation, stability, distribution and targeting. It is suggested that the stability of NP is better than that of lipo-some and it can carry more drug than liposome.

At present, the materials, which are reported to prepare NP in literature abroad, are all man-made synthetic materials. While NP is mostly ad-ministrated in travenously, we chose natural polysac-charide and protein to compose the carrier, and observed its distribution and metabolism after oral administration to rats.

Thirty minutes after the rats administrated 125I sodium alginate-BSA NP orally, the radioactive substances in their blood were detected.

The results indicate that NP is mainly distributed in the liver, spleen and lungs, quantitatively in heart and slightly in brain. This shows NP is difficult in passing through the blook-cerebral barrier. The experiments also display that the 125I sodium al-ginate-BSA NP enters the body-circulation by gas-trointestinal passage and is chiefly distributed in the tissues rich in phagocytes, such as in the liver and spleen.

In the study of its distribution, we discovered that there is still a large amount of radioactivity in the gastrointestinal passage 12 h after the ad-ministration. This illustrates that the absorption of NP is not complete because NP exists in the suspension as cloudy polymer but not mono-dispersion, and the large diameter of the polymer makes it difficult for the NP to be absorbed by the gastrointestinal passage.