AIM To further investigate the effect of cyclin D1 on the bio logic behavior of cancer cells and its potential role in gene therapy of tumor.

METHODS A cyclin D1 subcloning plasmid termed BKSD1 was const ructed by subcloning the human cyclin D1 cDNA into Bluescript-KS, a plasmid vec tor with a pair of T7 and T3-promo-ters, with recombinant DNA technology of mole-cular biology. So, it is easy to generate digoxi-genin (DIG)-labeled RNA probes of antisense and sense to cyclin D1 using RKSD1 as a template vector. PDORD1AS, an eukaryotic expression vector containing the full-length human cyclin D1 cDNA in its antisense orientation cloned into the retroviral vector pDOR-neo, was succ essfully constructed with BKSD1 to change restriction sites. A gastric cancer cell line, SGC7901/VCR, was transfected with pDORD1AS by Lipofect Amine-mediate d introduction and a subline termed SGC7901/VCRD1AS, which had stable overexpr ession of antisense RNA to cyclin D1, was obtained by selection in G418. The sub line, control subline transfected pDOR-neo and SGC7901/VCR were evaluated by methods of im-munohistochemistry, flow cytometry, molecular hybridization, morpho logy and cell biology.

CONCLUSION Stable overexpression of anti-sense RNA to cyclin D1 can reverse the trans-formed phenotype of human gastric cancer cells and may provide an approach of gene therapy for gastric cancer.

Studies on the functions of cellular proto-oncogenes and tumor suppressor genes indicate that most of these genes mediate signal transduction pathways that play a critical role in cell proliferation and dif-ferentiation as well as cell cycle control[1]. This has led to the realization that cycle regulatory proteins can also be directly involved in oncogenesis. Critical transitions in the eukaryotic cell cycle are regulated by the sequential activation of a series of cyclins and cyclin-dependent kinases (CDKs)[2]. Since the ma-jor regulatory events leading to mammalian cell pro-liferation and differentiation occur in the G1 phase of the cell cycle[3], the deregulated expression of G1 phase cyclins or their related CDKs might cause loss of cell cycle control, thus enhancing oncogenesis. Cyclin D1 has been strongly implicated in control-ling the G1 phase of the cell cycle. So, cyclin D1 gene is regarded as one of the best oncogene candi-dates[4]. Indeed, rearrangement, amplification, and overexpression of the cyclin D1 gene, which is located on the human chromosome 11q13 region, have been found in several types of human can-cer[5]. Overexpression of cyclin D1 in rat fibroblasts enhanced their growth and tumorigenicity and cy-clin D1 collaborated with an activated ras onco-gene[6] or a defective adenovirus E1A oncogene[7] to increase the transformation of primary rodent fi-broblast. The present study was undertaken to ob-tain more direct evidence th at cyclin D1 plays a crit-ical role in establishing and maintaining the trans-formed phenotype of these tumor cells. To this end, an antisense cyclin D1 cDNA was stably expressed in human gastric cancer cell line SGC7901/ VCR that kept high expression of cyclin D1. This led to de-creased levels of the endogenous cyclin D 1 protein, marked inhibition of cell proliferation, and loss of tumorigenicity. These findings provide direct evi-dence that the cyclin D1 gene plays an essential role in the increased proliferation and oncogenesis of the gastric cells.

Using BKSD1 containing a pair of promoters for T7 and T3 RNA polymerase as a tem plate vector, DIG-labeled, antisense and sense RNA probes of cyclin D1 was made by in vitro transcription of DNA. Ex- ponentially proliferating cells grown on glass slides were subjected to in situ hybridization by a standard nonradioactive in situ hybridization procedure. Control cell lines included T24, K5 62, SGC7901/ VCR and SGC7901/VCRneo which is a pDOR-neo transfected subline of SGC7901/VCR.

Cells were cultured in complete medium. When they were exponentially dividing, the cells were collected and analyzed for the cell cycle distribution (PI dye-ing) and the expression level of cyclin D1 (im-munofluorescence) by flow cytometry. All experi-ments were repeated three times.

Cells were plated in triplicate at a density of 2.5 × 104 per well in 24-well plates in 1mL of RPMI 1640 plus-100 mL/L-FCS. The number of cells per well was counted every day for 10 days. The doubling times and saturation dens ities of each cell line were calculated.

The growth rates of the two control cell lines and SGC7901/VCRD1AS cell line were measured at dif-ferent concentrations of FCS. All cells were seeded initially of 2.5 × 104 cells/ well. Growth of each of the three cell lines was determi ned at three different serum concentrations (10%, 2.5% and 0.5%).

Growth in 3 g/L-Noble agar was assayed. In brief, cells were suspended in RPMI1640 plus 200 mL/L-FCS containing 3 g/L-agar and plated in triplicate in 24-well plates. After 2 weeks of growth, the cells were counted by microscopy. All experiments were repeated two times and similar results were ob-tained.

Cells of 5 × 105 were injected subcutaneously into multiple sites in athymic (nude) mice. The animals were monitored for tumor formation every week and sacrificed one month later.

The observation results of morphology. The SGC7901/ VCR and SGC7901/ VCR neo control cells displayed a loss of contact inhibition and formed dense foci when they grew to a high satura-tion density. The SGC7901/ VCRD1AS cells grew at monolayer and low cell density, manifested an in-creased cytoplasm to nucleus ratio, and wer e much flatter and larger in cell size than the control cells (Figure 1).

The analysis of cell biology. As Figures 2, 3 and Table 1 show, compared with control cells, the SGC7901/ VCRD1AS cells displayed a much longer doubling time (P < 0.01), an increased percentage of cells in the G1/G0 phase, reacquired serum dependence to some extent, a much lower saturation density (P < 0.01), and a marked inhibition on tu-morigenicity in nude mice and soft agar cloning efficiency (P < 0.01). 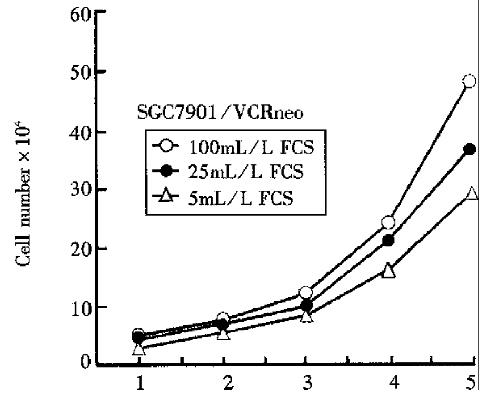 In previous studies, the anti-cyclin D1 antibodies or cyclin D1 antisense plasmids were microinjected into fibroblast[10] or B-cell lymphoma cell line s[11] during the G1 interval. The cells were prevented from entering the S phase. These results indicated that cy-clin D1 is required for cells to undergo the G1-S transition. However, because of the transient nature of these microin jection studies, they did not ad-dress the role of cyclin D1 overexpression in contin-uously dividing cells, in growth control and tumori-genesis. Overexpressi on of cyclin D1 in fibroblasts shortened the G1 phase[6]. In our study, stable overexpression of antisense RNA to cyclin D1 can inhibit the cell growth and reverse the transformed phenotype of gastric cancer cells besides a marked decrease in the mRNA and protein level of cyclin D1. For example, a much longer doubling time and increased percentage of G1/G0 cells reveal G1 phase arrest, a much lower saturation density and reacquired serum dependence announce restored ad-justability by exogenous signals, a monolayer growth feature in low density and increased cytoplasm to nucleus ratio manifest reacquired anchorage depen dent and somewhat epithelial feature. Our present studies provide the evidence t hat inhibition of the expression of cyclin D1 in tumor cells that overex-press this gene can reverse their transformed pheno-type. It is of clinical significance because large numbers of human tumors display overexpression of cyclin D1. Our findings may provide a potential ap-proach of gene therapy for gastric cancer[12].