AIM: To establish transgenic mice lineage harboring hepatitis B virus X gene and to provide an efficient animal model for studying the exact role of the HBx gene in the process of hepatocarcinogenesis.

METHODS: The HBx transgenic mice were produced by microinjecting the construct with X gene of HBV (subtype adr) DNA fragment into fertilzed eggs derived from inbred C57BL/6 strain; transgenic mice were identified by using Nested PCR; expression and phenotype of HBx gene were analyzed in liver from transgenic mic at the age of 8 weeks by RT-PCR, pathologic examination and periodic acid-schiff staining (PAS), respectively.

RESULTS: Five hundred and fourteen fertilized eggs of C57 BL/6 mice were microinjected with recombinant retroviral DNA fragment, and 368 survival eggs injected were transferred to the oviducts of 18 pseudopregnant recipient mice, 8 of them became pregnant and gave birth to 20 F1 offspring. Of 20 offsprings, four males and two females carried the hybrid gene (HBx gene). Four male mice were determined as founder, named X1, X5, X9 and X15. These founders were back crossed to set up F1 generations with other ibred C57BL/6 mice or transgenic littermates, respectively. Transmission of HBx gene in F1 offspring of X1, X5 and X9 except in X15 followed Mendelian rules. The expression of HBx mRNA was detected in liver of F1 offspring from the founder mice (X1 and X9), which showed vacuolation lesion and glycogen positive foci.

Despite overwhelming epidemiological evidence linking persistent Hepatitis B Virus (HBV) infection and the development of hepatocellular carcinoma (HCC)[1], the pathogenetic mechanisms by which the virus contributes to liver cell transformation remain elusive. The case is mainly the limited host range and the lack of in vitro culture systems to propagate it. With the development of embryo microinjection technology, leading to the production of transgenic animals, it provided a powerful tool for studies of gene expression and creation of animal models of human diseases.

The HBx gene is one of the four genes in the HBV genome. It encodes a viral transactivator, the HBx antigen (HBxAg). This protein has been shown to convert immortalized mouse fetal hepatocytes into a fully malignant phenotype. Moreover, NIH 3T3 cells stably transfected with a HBx expression plasmid are carcinogenic in nude mice. Interestingly, recently it has been reported that the P53 and HBx proteins can be co-immunoprecipitated from HBV-related HCCs. Complexing of P53 protein by HBx protein should inhibit its DNA consensus binding and transcriptional transactivator function and provide a basis for the ways in which this interaction might contribute to malignant transformation[2].

These observations suggest. that HBx may play a part in the molecular pathogenesis of HCC in humans. In supprt of this hypothesis, it has been shown that high level expression og the HBx gene can lead to HCC in transgenic mice[3-5], although others have not observed the induction of HCC in independently derived X gene trasgenic mouse strains[6-8]. Noticeably, the mice that develop HCC were produced and maintained on a CD1 backround that displays a high spontaneous rate of HCC. This noght suggest that the HBx protein functions are a cofactor in the process of hepatocarcinogenesis, and that it may not be sufficient to induce HCC by itself[9].

To investigate the exact role of the HBx gene in the process of hepatocarcinogenesis. The HBx transgenic mice were produced by microinjecting the HBx gene of HBV (subtype adr) DNA fragment into fertilized eggs derived from inbred C57BL/6 strain mice that displays a lower spontaneous rate of HCC, and its phenotype were preliminarily analyzed by pathologic examination and PAS.

Production of HBx transgenic mice. Plasmid PXSHD42 was linearized with Ecor I and purified with QIAGEN. It was microinjected into the male pronucleus of the fertilized eggs of C57BL/6 mice. The injected eggs were then transplanted into the oviduct of pseudopregnany mice. Operated mice got pregnant and given birth.

Detection of transgenic expreseeion. Tissue samples were removed from F1 transgenic mice liver at the age of 8 weeks and frozen in liquid nitrogen. Total RNA was extracted by the method described by Sambrook[10].

Histological procedures and cytohistochemical staining. Liver tissues from F1 transgenic mice at the age of 8 weeks were divided into two portions: one portion fixed in 10% buffered formalin for Hematoxylin and Eosin as well as PAS stainin, the other quickly frozen in liquid nitrogen and used for RNA analysis.

Recombinant retrovial DNA fragment was microinjected into the male pronucleus of the 514 fertilized gees of C57-B1/6 mice, and 368 survived eggs were transferred to the oviducts of 18 pseudopregnant recipient mice, 8 of them became pregnant and gave birth to 20 offspring mice. The zygotes survial rate and birth rate were 71% (368/514) and 5.4% (20/368). DNA extracted from tail of 20 offspring mice were screened by PCR amplification (Figure 2), and the results showed that four males and two frmales carried the hybrid gene (HBx gene). Four male mice were determined as founders, named X1, X5, X9 and X15. Total integration rate and efficiency of transgene was 30% and 1.1%, respectively. 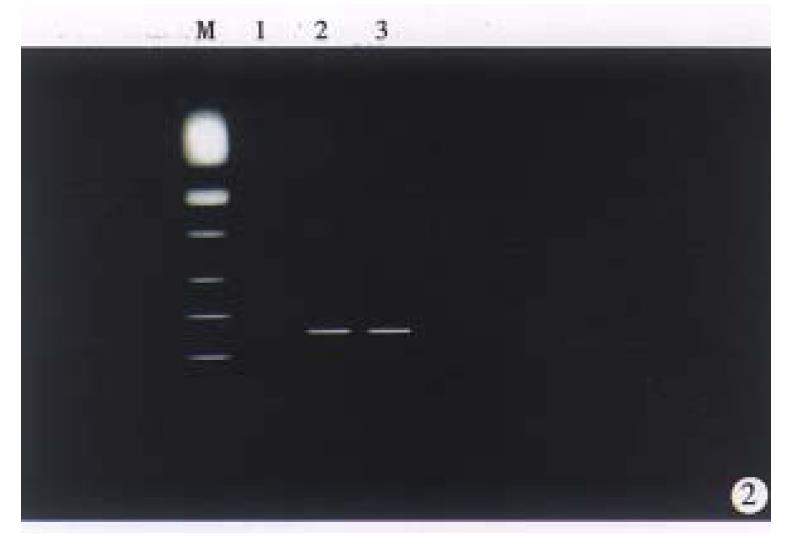 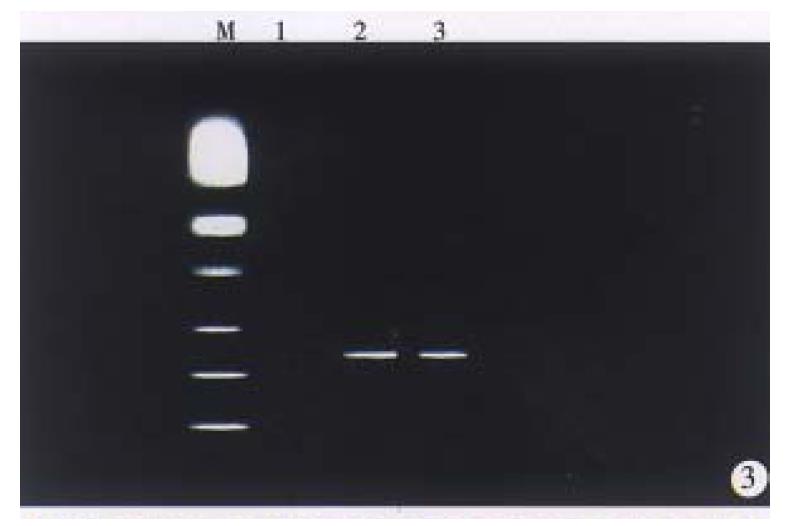 The liver from the F1 offspring of lineage (X1, X9) showed the presence of areas of altered hepatocytes which were made up of cells with pooly stained cytoplasm and PAS positive foci (Figure 4), but not in thir normal littermates. 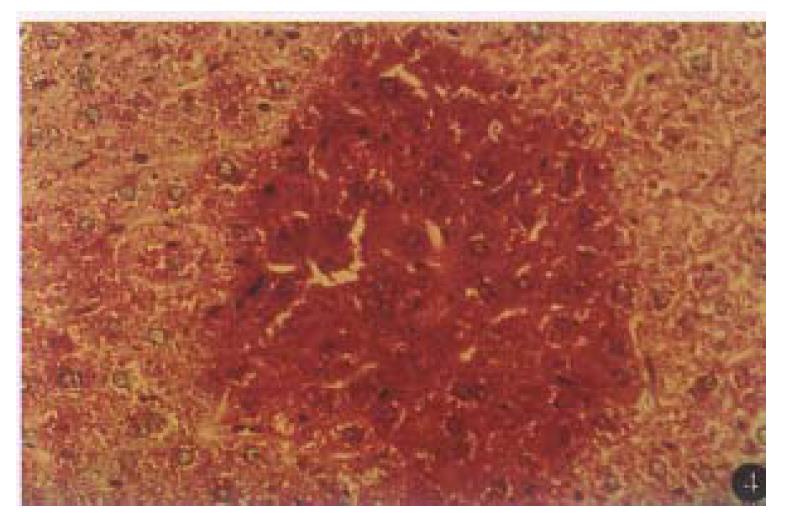 Despite the increased frequency in the generation of transgenic animals, the methodologies for introducing exogenous DNA into mammalian early embryos have remained essentially unchanged since the pioneering work of Gordon in the early 1980s[11]. To date, the most widely used method is microinjection of foreign DNA into the pronuclei of fertilized eggs. The method has enabled the production of transgenic animals from various mammalian species, but the success rate of generating a transgenic animal is extremely low. In this study, the zygotes survival rate and birth rate were 71% and 5.4% and efficiency of transgene was 1.1%. The lowas feeiciency of transgene may be influenced by many factors such as DNA structure, purity and concentration, gene vector and fertilized eggs as well as mouse strains, etc[12]. The result of F1 generation mice integration demonstrated that foreign gene can stably transmit to next generation in a normal Mendelian fashion. As for F1 generation from founder X5 low integration efficiency, it was thought that the founder X5 was likely to mosaics. The mechanism of DNA integration into mouse chromosomes following microinjection is unknown. One possibility is that spontaneous breaks occur in chromosome, possibly exacerbated by the microinjection technique and DNA repair endonuclease, and these breaks are sites for integration of linear DNA[12]

When the transgene results from random integration of a DNA fragment injected into fertilized eggs the pronucleus, its level of expression in the resulting transgenic animal varies and depends upon factors, such as the site, transgene cope number, genetic background of mouse, particularly promoter/enhancer of fusion gene. In this study, HBx gene under the control of retrovial promoter/enhancer LTP and SV40 promoter, the expression of HBx gene was detected by RT-PCR in liver from partial transgenic mice lineage (X1, X9). The results demonstrated that the retrovial promoter/enhancer LTR and SV40 promoter were probably functional, and HBx gene expression was influenced by different integrated site.

Above all initial histological examination of liver in HBx gene transgenic mice revealed the presence of patholoical change ( vacuolation lesions) and glycogen positive foci. The results of phenotype observation were similar to KIM’s[3], and were consistent with their preneoplastic lesions, and further identified HBx transgenic mice model established. To sum up, we have produced transgenic mice harboring HBx gene. This work has laid a solid foundation for further study on the function of JBx gene in hepatocarcinogenesis, successively analysis on these transgenic mice are being undertaking.