AIM: To study the antagonism of cholecystokinin octapeptide (CCK-8) against the effect of morphine and its mechanism.

METHODS: The method and mechanical activities of rat duodenum in vitro were recorded simultaneously.

RESULTS: Acetylcholine (ACh) could increase the amplitude and the number of the spike potential (SPA and SPN) of rat duodenum in vitro, followed by the increase of the duodenal contraction amplitudes (CA), showing a positive correlation. Morphine, on the contrary, inhibited the potentiation of ACh, showing a negative correlation. CCK-8 could antagonize the effects of morphine, i.e. the SPA and SPN were increased again, followed by the increase of CA. CCK-A receptor antagonist Devazepide could reverse the antagonism of CCK-8 to the effect of morphine.

CONCLUSION: CCK-8 could antagonize the effect of morphine which inhibited the potentiation of ACh on the duodenal activities in vitro. The antagonistic effect of CCK-8 on morphine was mainly mediated by CCK-A receptor.

Cholecystokinin octapeptide (CCK-8) is a typical brain-gut peptide. Many data show that CCK-8 has been the strongest endogenous anti-opioid substance up to now. Faris pointed out that CCK-8 could block morphine analgesia in the rat tail flick test[1]. Han[2] and Xu[3] reported respectively that CCK-8 antagonized the analgesic effects of morphine and electroacupuncture (EA), and played an important role in the induction of morphine tolerance and EA tolerance using the behavioral changes and electrophysiological methods. Zetler indicated that morphine and opioid peptides antagonized the hyperfunction of contraction of guinea-pig ileum in vitro induced by CCK-8 like peptide[4]. Valeri proved that endogenous opioid peptides could antagonize the effects of CCK-8, in the similar experiment[5]. But few report about the anti-opioid effect of CCK-8 on the duodenum in vitro was found.

In this experiment, the method of simultaneously recording the electrical and mechanical activities of rat duodenum in vitro was adopted so as to inquire into the antagonism of CCK-8 to the effect of morphine and its mechanism.

A rat was given peritoneal anaesthesia with 20% urethan (5 mL/kg), the peritoneum was opened and one or two segments of 2 cm duodenum were cut off under pylorus. The duodenal segments were put into a bathtube containing 50 mL Tyrode’s solution which was 38¡æ and saturated with oxygen. Then the bathtube was maintained at 38 °C in CS-501 superthermostat. One end of duodenal segment was fixed with resting load of 5 g and the other end was connected with a LZ-1 tension transducer according to longitudinal axis of jejunum. Thus contractions of duodenal smooth muscle were recorded. The electrical activities of duodenum were led out by silver adsorptive electrode. Through bioelectrical amplifier, the electrical activities, mechanical contraction and time scale were simultaneously recorded by ST-41 multipurpose polygraph. The parameters were modulated as follows: time constant 0.3 s, high frequency wave filter 30 Hz, electrical gain 3, mechanical gain 4, recording paper velocity 5 mm/s[6].

Firstly, normal electrical and mechanical activities of every segment of duodenum was simultaneously recorded. Then 200 μL of ACh was injected quickly into the bathtube by a microinjector. Sixty seconds after the injection of ACh, 50 μL of morphine hydrochloridum was administered. At 120 s and 240 s, 40 μL CCK-8 and 20 μL Devazepide were added respectively.

Each value was expressed as x-±s. All data were analyzed with paired t test. 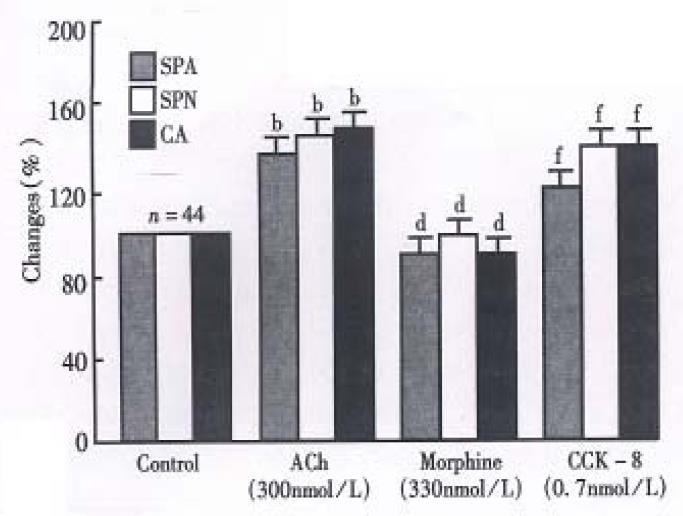 Figure 2 showed the electrical and mechanical change curves of one segment of duodenum simultaneously recorded by multipurpose polygraph. It indicated that the SPA and SPN of the duodenal segment increased, followed by the increase of the CA after the injection of ACh, showing the enhancement of duodenal activities. Whereas the SPA, SPN and corresponding CA were reduced when morphine was administrated, showing that morphine inhibited the excitatory effects of ACh. At this moment, the injection of CCK-8 increased the SPA, SPN as well as CA, suggesting an antagonism of morphine effect by CCK-8. On the basis of the above, after CCK-A receptor antagonist Devazepide was administrated, the SPA and SPN were decreased again, accompanied by the reduction of CA. It showed that Devazepide reversed the anti-morphine effect of CCK-8. Moreover, every contraction wave occured after the beginning of spike potential over the slow potential and the ratio between slow potential and contraction wave was 1:1. 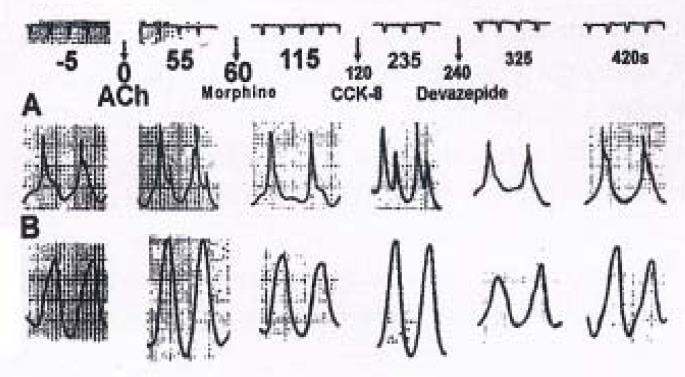 The statistical analytical results of 22 duodenal segments are shown in Table 1.

CCK-8 was the first brain-gut peptide found in human. CCK-8 existed in brain and peripheral tissues of animals and human[7]. Previous works indicated that an antagonistic interaction might occur between CCK and opioid peptides. Our experimental results demonstrated that CCK-8 per second did not show any effect, but could selectively antagonize the effects of morphine which inhibited the potentiation of ACh to rat duodenum in vitro with the electrical and mechanical activities. The conclusion was similar to those previous reports[4,5].

Recent receptor binding studies have confirmed the existence of 2 distinct CCK receptor subtypes, i.e. CCK-A and CCK-B receptor were present in both brain and peripheral tissues[8]. Devazepide was considerably more potent in inhibiting CCK binding to peripheral-type receptor (CCK-A) than to brain-type receptor (CCK-B)[9]. This results showed that Devazepide could reverse the antagonism of CCK-8 to the effect of morphine, therefore it was inferred that CCK-A receptor participates in the anti-morphine effect of CCK-8.

To sum up, our present work firstly demonstrated that CCK-8 could antagonize the elimination of morphine on the potentiations of ACh to duodenal activities, and these effects were mediated by CCK-A receptor. It is suggested that CCK-like peptides and opioid substances together with cholinergic system could regulate the gastrointestinal activities, and provided a new experimental basis for further research in the clinical treatment of the intestinal motility disturbances.

Project supported by the Scientific Technological Foundation of Provincial Education Committee of Heilongjiang in China, No. 95-8.