METHONDS: The manifestations of nonpathologic perfusion defects with CTAP and non-pathologic enhancement found in CTHA were analyzed in 50 patients with primary hepatocellular carcinoma.

CONCLUSION: There was high frequency of non-pathologic perfusion defects detected with CTAP and non-pathologic enhancement found in CTHA. The simultaneous use of both procedures may help decrease the false-positive rate, and increase the veracity of diagnosis for hepatocellular carcinoma.

Fifty patients (44 man, 6 women) with hepatocellular carcinoma were examined with CTAP and CTHA in our department. They ranged in age from 21 to 65 years (mean age, 413 years). AFP was elevated in 41 patients. Cirrhosis occurred in 42 cases. Child’s classification showed 16 cases of Child’s A, 30 cases of Child’s B, and 4 cases of Child¡äs C. The tumors measured 0.2 cm-5.5 cm in size with a mean of 3.6 cm. Multiple nodules were found in 42 cases.

CTAP examinations were performed with incremental scanning of liver in cranial-to-caudal direction with 8-mm or 10-mm collimation on bi-spiral Elscint Twin Flash scanner (Elscint Corp.). CT images were obtained 25 s-35 s after the initiation of transcatheter (5-F) superior mesenteric artery injection of 30 mL-40 mL of non-ionic contrast material. Contrast material was injected at a rate of 3.0 mL/s-3.5 mL/s with an automatic power injector (Medrad, Pittsburgh). Conventional angiography was not performed before CTAP. During the catheterization, contrast material administered before CT scanning was limited to 5 mL-10 mL injected by hand to visualize any aberrant vessels and to facilitate proper catheter placement.

In recent years, with the development of spiral CT technique, CTAP and CTHA have become widely used in diagnosis and differential diagnosis of small hepatocellular carcinoma. Compared with non-spiral CT arteriography, spiral CT arteriography has achieved great improvement not only in scanning technique, but also in quality of CT images[1]. We scanned the entire liver consecutively, and obtained excellent images of CTAP and CTHA by the technique of a single breath-hold scanning, with a comparatively small quantity of contrast material (CTAP 30 mL-40 mL, CTHA 20 mL-30 mL). Compared with conventionally enhanced CT (contrast material administrated by venous injection), CTAP and CTHA have a high detectability of 80%-96%[2]. In our 50 patients examined with CTAP and CTHA, the detectability rate of CTAP, CTHA and simultaneous use of both procedures were 92.2%, 90.1% and 94.8% respectively. 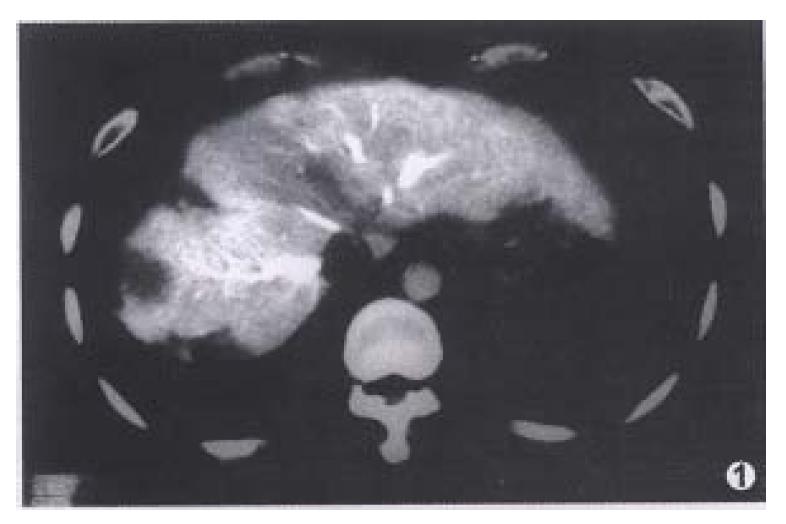 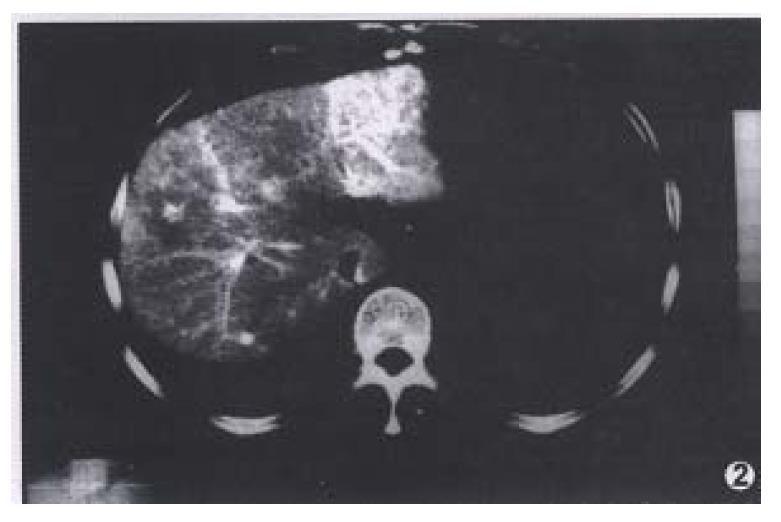 Figure 2 CTHA image obtained in a 45-year-old man shows a small round peripheral enhancement in right lobe which is non-pathologic enhancement. No tumor is found in the operative pathology.
Footnotes

Project supported by “9.5” Natioal Major Project of National Committee of Sciences and Technology, No. 96-907-03-02