METHODS: An isolate of H. pylori obtained from a patient with gastric cancer was used to infect mice. Fifty mice were divided into eight groups. Two groups served as negative control without any inoculation and internal negative control with 0.5 M NaHCO3 and brain heart infusion (HBI), respectively. Mice in each experimental group were first inoculated with 0.5 M NaHCO3 and then H. pylori suspension for 3 times at a 2-d interval. Mice from controls and infectious groups were sacrificed at a weekly interval postinfection. Gastric samples were trimmed, inoculated onto chocolate blood agar and then incujbated in microaerophilic atmosphere at 37¡æ for 14 d. Sera were examined for immunoglobulins against H. pylori spiral and coccoid antigens by ELISA.

RESULTS: After inoculation H. pylori was isolated in one mouse from one week postinfection. No H. pylori was detected in control mice. However, urease test was positive in 50% (5/10) control mice, 70% (7/10) mice inoculated with NaHCO3 and BHI and 77% (23/30) mice infected with H. pylori. The systemic immune responses of the mice to H. pylori strain were determined by ELISA. The mice showed immune responses to both H. pylori spiral and coccoid antigens one week after infection with H. pylori. The peak mean absorbances of antibodies against spiral and coccoid forms were four weeks postinfection which showed 6 and 18 times higher than that of negative control group respectively (P < 0.01).

Helicobacter pylori colonizes stomach of human being and causes gastritis and peptic ulcer[1]. It has been reported that this organism exists in two forms, spiral form and coccoid form[2,3]. Many investigations are being performed on whether coccoid form is degenerative or viable. Hua and Ho[3] reported that similar to the exponential cultures, ageing coccoid form produces alkaline phosphatase, acid phosphatase, leucin arylamidase and naphthol-AS-β1-phosphophdrolase and remains genetically unchanged suggesting that it is highly likely to be viable. It was found that specialized attachment sites such as the “adhesion pedestal”, “cup-like indentation” and “abutting adhesion” were seen in the interaction between coccoids and epithelial cells. These adherence patterns were similar to those observed with spiral form in gastric biopsy specimens in vivo, suggesting coccoid could be a differentiated infective form of H. pylori[4]. Therefore, this form was suspected to play a critical role in the transmission of H. pylori and could be one of the causes of recrudescence of H. pylori infection after antibiotic treatment. In this study we investigated mouse immune response against H. pylori after oral infection with the bacterium and demonstrated coexistence of spiral and coccoid forms of H. pylori in mouse.

Female BALB/c mice weighing about 25 g were obtained from the Laboratory Animal Center, National University of Singapore. Mice were 5 weeks old when they were sent to laboratory and maintained for one week to allow them to adapt to the new environment. Mice were fed with a commercial rodent diet and provided with sterile water.

An isolate of H. pylori H132 obtained from a patient with gastric cancer was used for this study. Strain H132 was isolated on chocolate blood agar base No.2 medium with 5% horse blood at 6 days of incubation of biopsy at 37 °C under microaerophilic environment. The bacterium was inoculated into brain heart infusion (BHI) broth supplemented with 10% horse serum and 0.4% yeast extract in a flask at 37 °C for 2 d. The brother culture was centrifuged at 4000 × g for 20 min. The supernatant was discarded and fresh BHI broth supplemented with 10% horse serum and 0.4% yeast extract was added to the pellet. The suspension was mixed gently. The inoculum was incubated at 37 °C for another 2 d. The concentration of spiral form was determined by spread plate method and bacterial counting chamber. In this experiment the concentration of H. pylori spiral form was about 1-5 × 108 CFU/mL.

Fifty mice were included in this experiment. They were divided into eight groups. Two groups with ten mice each. One of these 2 groups served as negative control without any inoculation while the second group of 10 mice was inoculated with 0.3 mL of 5 m NaHCO3 and 0.3 mL BHI serving as internal negative control. The remaining 30 mice were divided into six groups of 5 mice each. Mice in each experimental group were first inoculated with 0.3 mL 0.5 M NaHCO3. An hour following that, 0.3 mL of H. pylori suspension was administered with a gastric gavage. The procedure was repected 3 times at 2-d interval for these 30 mice.

Two mice from the controls and five mice from one infection group were sacrificed at weekly interval postinfection. Before being sacrificed, the mice were fasted for one day with free access to water. The mice were sacrificed by cervical dislocation. Stomachs were dissected for microbiological analyses. Five hundreds microliters of blood samples were taken from the heart of sacrificed mice for immune response studies.

Gastric samples were examined within one hour. Samples of antrum were trimmed and inoculated on chocolate blood agars with antibiotics (vancomycin 6 g/L, nalidixic acid 5 g/L, amphotericin 6 g/L and trimethoprin 10 g/L) and without antibiotics. Plates were incubated in microaerophilic atmosphere at 37 °C for 14 d. Typical colonies were indentified by standard methods[5]. Blood of mice was collected from heart and centrifuged at 4000 × g for ten minutes. Sera were removed from clot and stored at -20 °C. Sera were examined for immunoglobulins against H. pylori by ELISA.

Antigens of spiral and coccoid form of H. pylori were prepared by acid glycine extraction according to a modification method of Goodwin et al[6] as described by Vijayakumari et al[4]. Protein concentration was determined by the modified Lowry protein assay and the antigens were stored in 1ml aliquots at -20 °C until use.

The sera to be tested were diluted 1:100 with serum diluent (0.02% thimerosal, 0.05% Tween 20 and 1 g/L gelatin in PBS). A 100 μL aliquot of each diluted test serum was added to each of the three wells of the microtitre plate. Plates were incubated at room temperature for 90 min. The plates were then washed three times with PBS containing 0.02% thimerosal and 0.05% Tween 20.

The second antibody was horse radish peroxidas labelled goat anti-mouse immunoglobulins (Dako) which react with all mouse IgG subclasses, IgA and IgM. It was diluted to 1:4000 with PBs containing 0.02% thimerosal, 0.02% BSA and 0.1% gelatin. A 100 μL of the diluted secondary antibody was added to each well of the plate that was subsequently incubated at room temperature for another 90 min. It was then washed three times with PBS containing 0.02% thimerosal and 0.05% Tween 20 followed by washing two times with PBS containing 0.02% thimerosal only. A 100 μL of substrate containing 40 mg of o-phenylenediamine dihydrochloride (OPD, Sigma) and 40 μL of 30% hydrogen peroxide (Merck) in 100 mL phosphate citrate buffer (0.1 M C6H8O7H2O and 0.2 M Na2HPO4H2O) at pH 5.0 was added to each well. Plate was left at room temperature in the dark for 15 min. A-50 μL of 2.5 M H2SO4 was added to each well to stop reaction. The optical density (OD) of the reaction mixture was read immediately at wavelength of 490 nm and 620 nm reference filter using an ELISA reader (Ceres 900 Bio-Ted).

After inoculation H. pylori was isolated in only one mouse from one week postinfection. The isolate was identified by spiral morphology, Gram negative, urease positive and naphthol-AS-B1-phosphohydrolase, leucine arylamidase and alkaline and acid phosphatase in API ZYM test. No H. pylori was detected in control mice and mice inoculated with NaHCO3 and BHI. However, urease test was positive in 50% (5/10) control mice, 70% (7/10) mice inoculated with NaHCO3 and BHI and 77% (23/30) mice infected with H. pylori.

In macroscopic findings, no visible gastric erosion or ulceration was seen in either H. pylori-infected mice or control mice. 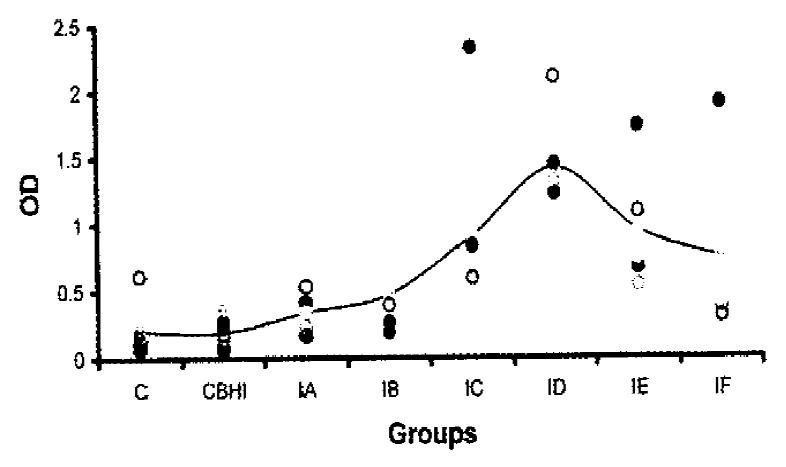 Anumber of animal models have been developed to provide information on pathogenesis, immunity and therapy for H. pylori infection. These include models in nonhuman primates[7,8], gontobiotic and conventional piglets[9,10]. However, there were contradictory reports in murine model study. Karita et al[11] detected colonization of H. pylori in the germfree athymic and euthymic mice up to 10 weeks after inoculation, but observed temporary colonization in conventional euthymic mice. Cantorna and Balish[12] tried in vain to colonize clinical strains of H. pylori in the alimentary tract of germfree rodents. Marchetti et al[13] were able to detect colonization of bacterium and gastric pathology in specific-pathogen-free mice up to 8 weeks following challenge with fresh clinical isolates whereas a laboratory strain failed to establish infection. Watanabe et al[14] successfully demonstrated the long-term infection with H. pylori induces adenocarcinoma in Mongolian gerbils.

In the present study, attempts were made to colonized specific-pathogen-free mice with a fresh H. pylori isolate. H. pylori was isolated in one mouse. Culture of this fastidious micro-organism is always a challenge with regard to the proper conditions and interfering contaminants which may inhibit the growth of H. pylori. This may be the reason that in this study only one H. pylori strain was isolated from one mouse. Urease test was reported to be a highly effective detection method especially in the absence of other microflora as in human stomach or germfree animals[15,16]. However, this method of detection could be ineffective when used in conventional mice due to the presence of other urease-producing microflora which could lead to false positive results[17]. In this study, urease test was found positive in the gastric specimens of 50% (5/10) control mice, 70% (7/10) mice inoculated with NaHCO3 and BHI and 77% (23/30) mice infected with H. pylori. The indiscrimination of urease test results among different experimental groups of mice made it difficult to determine whether positive urease tests were caused by H. pylori colonization or contaminating urease producers. The result is in agreement with report of Xia et al[17] that urease test may not be a suitable method of detection in conventional or specific-pathogen-free mice model.

The serum immune response of mice against H. pylori spiral and coccoid antigens was investigated. One week postinfection, the mouse antibodies against H. pylori increased. The peak mean OD values of antibodies were four weeks postinfection. Coincidently, the profile of antibodies against coccoid antigens was similar. It was shown that four weeks postinfection, antibodies against coccoid antigens increased much higher than that of spiral antigens. Could there be more coccoid form than spiral form in the stomach of mice where the environment is not so favourable to the growth of H. pylori Bhatia et al[18] observed the effect of the presence of Lactobacillus acidophilus or its metabolites on inhibition of H. pylori growth in in vitro culture. The presence of significant number of Lactobacillus in gastrointestinal tract of mice might affect H. pylori and promote it to convert to coccoid form. The detection of antibodies against H. pylori spiral and coccoid antigens is consistent with the observation in patients with gastroduodenal disease that both forms coexist in stomach and could involve in the outcomes of different gastric disorders[19]. It was reported that after antibiotic treatment for H. pylori infection, if failure happened the majority of patients were recrudescence[20], i.e. the patients re-infected with same strains of H. pylori. This relapse occurred between 5-50 months after treatment, while 4 weeks after treatment those patients showed eradication of H. pylori based on micribiological methods. One reason could be that two forms of H. pylori coexist in stomach. When the environmental condition is unfavourable to H. pylori, most of the cells might convert to coccoid form which is difficult to be detected by commonly used microbiological methods.

In this study we demonstrated coexistence of spiral and coccoid forms of H. pylori in experimental mice. This factor should be considered in clinical management since coccoid form might be viable and pathogenic as suggested by some investigators[3,4].