Radiotherapy was initiated when Grubbe treated tumor with X-rays in 1896[1]. Afterwards, radioisotopes such as Ra and Rn, were used for clinical diagnosis and treatment. Basic researches on the biological effects of X-rays, γ-rays, fast neutron, and so on discovered that damages to mammalian cells induced by high-LET irradiation were more serious than that by low-LET[2].

Because of their low oxygen enhancement ratio (OER) and high relative biological effectiveness (RBE), heavy ions can kill carcinoma cells efficiently[3], among which about 5%-20% was hypoxia. There was a Bragg peak along the energy deposition of heavy ions, so that more dose could reach to the tumor while less to the normal tissues[4]. Therefore, heavy ion beam is believed to play an important role in the future in the radiotherapy for tumors.

The treatment with heavy ion beam has been studied and put into clinical practice since the 1970s in America and since 1994 in Japan. But in our country, this research is still in its initial stage. This is our preliminary report on the dose--response and fractionated irradiation with 25MeV/u 40Ar14+ in human hepatoma SMMC-7721 cells.

The human hepatoma SMMC-7721 cell line was obtained from the Second Military Medical University[5]. The cells were cultured in RPMI-1640 medium (Gibco Inc.) supplemented with 10% calf, 100 u penicillin and 100 μg/mL streptomycin. The medium was placed at 37 °C in humidified atmosphere with 5% CO2. The cells were inoculated in the glass flasks with a diameter of 35 mm and density of 5 × 104 cells/ml 2 d before irradiation.

Before irradiation, the medium was removed and the cells were washed twice with D-Hank’s buffer. The flasks were enveloped with 4 μm mylar membrane. A part of cells were irradiated at the dose of 0.68 Gy, 6.8 Gy, 68 Gy, 680 Gy and 6800 Gy, respectively. The others were irradiated with tractionated dose of 68 Gy for 1, 2, 3 and 4 times, respectively, at an interval of 2 h. After irradiation, each flask was added 2 mL medium and kept in 37 °C incubator for 24 h.

After washed with D-Hank’s buffer, the cells were fixed for 4 h and then stained with acridine orange (0.01 mg/L, pH 6.8) for 10 min and differentiated with stilled water for about 5 min. Cells with micronuclei were counted under the fluorescence microscope to obtain frequency of micronuclei (FM). Afterwards, cells were washed once with PBS (pH 6.8) and stained with Giemsa (1:20, pH 6.8) for 8 min to gain number of cells per mm2 (NC).

Under the florescence microscope, the null were bright yellow while cytoplasm and nucleolus were red. After irradiation, many types of aberration were observed, such as micronuclei, small nuclei, free chromosomes, chromosome bridge, and so on (Figure 1). 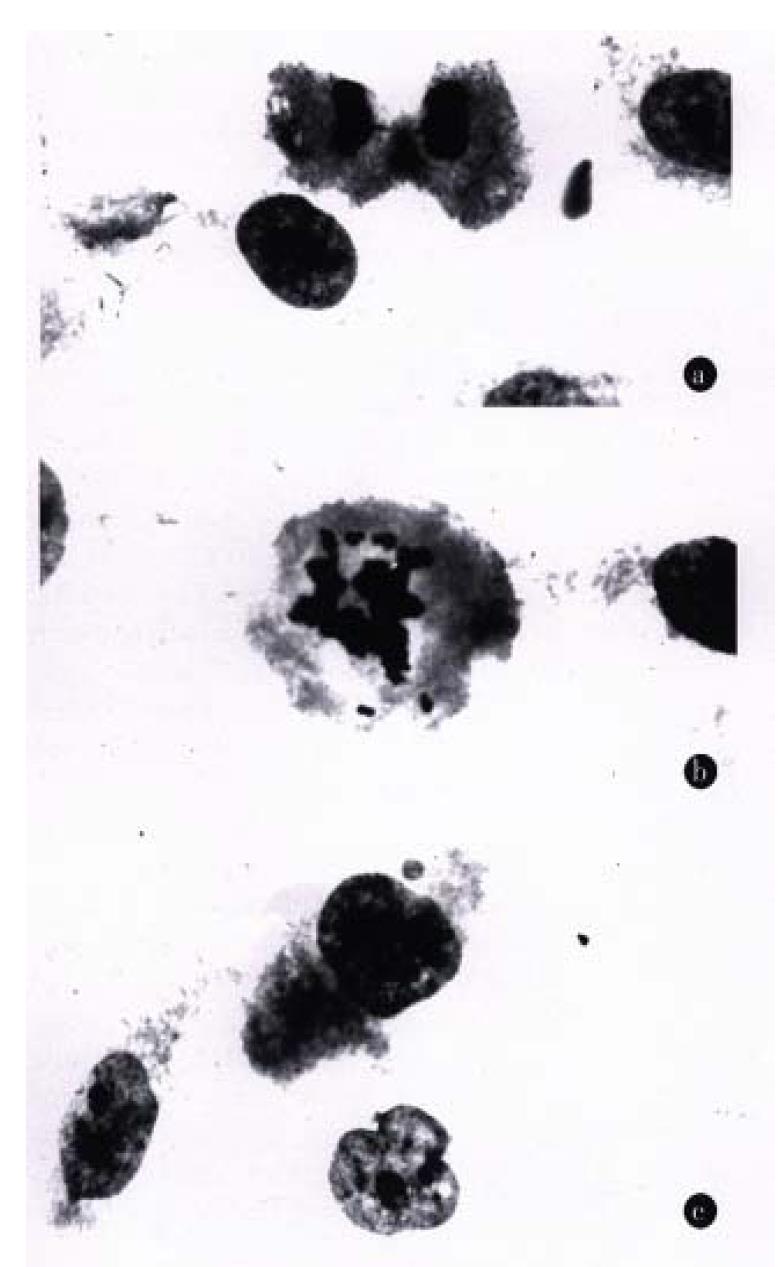 Cells treated with 680 Gy and 6800 Gy were dead, but the remnants appeared different. The remnants induce by 680 Gy were far smaller than controls and the nuclei were bright yellow and the cytoplasm was light yellow, while those induced by 6800 Gy change little in size, but the nucleus and the cytoplasm could not be distinguished. The death of the former may be caused b y the change of the permenace ability of cellular membrane caused by the high dose, and shrinking of the cells. When fixed, the nuclei were smaller than controls but not disperse. The dose for the latter one was even higher, and cells died quickly after irradiation. So, the nuclear membrane was broken, and the nuclei entered the cytoplasm when fixed.

As shown in Table 1, FM of the samples was higher than the control, which was correlated positively with the dosage (r = 0.9952) while NC was negatively correlated with dosage (r = -0.9279). This is consistent with other approaches[6].

As shown in Table 2, with the increase of irradiation times FM decreased and NC increased. The correlation coefficient was r = -0.9590 and r = 0. 9681, respectively.

The damages induced by heavy ions were intensified with the increasing dose, but NC induced by 0.68 Gy was higher than that of the control, possibly because very low dose can stimulate cell propagation.

When the times of irradiation were increased, the repair mechanism is activeted and the efficiency of repair was enhanced. FM induced with four divided doses was less than that of control. This may be due to the high repair efficiency.

NC was closely correlated with FM, but NC represented by the lethal effect more directly that FM. The correlation efficient was -0.8870 for single one. Both as the endpoints of radiosensitivity, they reflected the same results.

Project supported by the Top Project of National Fundamental Research, No. 01-3.