AIM: To study the effect of Helicobacter pylori (H. pylori) infection on gastric epithelial proliferation in the progression from normal mucosa to gastric carcinoma.

RESULTS: The gastric epithelial proliferation, expressed as PCNA labeling index (LI)%, was progressively increased in successive stages from normal mucosa to gastric carcinoma regardless of H. pylori status. There was significant difference in PCNA LI% among all groups (P < 0.01). The analysis pursuing the effect of H. pylori infection on gastric epithelial proliferation in the progression from normal mucosa to gastriccarcinoma showed that in superficial gastritis and mild atrophic gastritis groups, PCNA LI% in H. pylori positive patients were 13.14 ± 1.6 and 19.68 ± 2.22 respectively, significantly higher than 6.95 ± 0.78 and 11.34 ± 1. 89 in H. pylori negative patients (P < 0.01); but there was no such difference in other groups (P > 0.05).

Gastric carcinoma is one of the leading causes of malignancy-related death in China, and its etiology has not been fully elucidated. The epidemiological and histopathological studies have shown that Helicobacter pylori (H. pylori) infection is closely associated with gastric carcinogenesis[1-5]. However, the mechanism and the stages in which H. pylori participates in the process of gastric carcinogenesis are largely unknown. An increase in epithelial cell proliferation is one of the earliest mucosa changes in the development of gastric cancer, and may serve as a risk indicator for it[6,7]. The proliferation nuclear cell antigen (PCNA) expression is a reliable marker for evaluation of cell proliferation[8,9]. In this study, we used PCNA as a marker to investigate the effect of H. pylori infection on gastric epithelial proliferation in the progression from normal mucosa to gastric carcinoma.

Archival gastric biopsy specimens used in this study were randomly selected from those kept in the pathological department of Shanghai Institute of Digestive Diseases between January and December 1996. The specimens were taken from 161 subjects, and the diagnosis was made based on the endoscopic and histological findings. Subjects were assigned to one of the following five study groups according to the histological diagnosis: Group 1, normal gastric mucosa, H. pylori negative; group 2, chronic superficial gastritis; group 3, chronic atrophic gastrits with intestinal metaplasia; group 4, dysplasia; and group 5, gastric carcinoma (intestinal type). The atrophy and intestinal metaplasia in gastric mucosa were graded as mild, moderate and severe respectively according to the criteria proposed in Sydney system, and scored 1, 2 and 3. Atrophic gastritis was usually accompanied by intestinal metaplasia, so the scores of atrophy and intestinal metaplasia in each patient were added up, and then further classified as mild for total score equal or less than 2, moderate for scores 3-4, and severe for scores more than 4. The patients with chronic gastritis accompanied by dysplasia all belonged to group 4.

PCNA staining of antral biopsy specimens was performed using immunohistochemial ABC method. Briefly, PCNA staining was proceeded, after deparaffinizing in xylene, clearing in ethanol, rehydrating through graded ethanol and washing in PBS. Endogenous peroxidase was blocked by 0.3% H2O2, and then washed slightly in PBS. The sections were preincubated with diluted normal goat serum, and then incubated with anti-PCNA antibody (PC10, mouse anti-human, DAKO Company) diluted 1:80 at 4 °C overnight. After draining, the sections were incubated with a biotinylated anti-mouse IgG diluted 1:50 for 60 min, then incubated with ABC working solution for 30 min according to manufaturer’s instruction (Sino-American Biotechnology Company). After another washing, the sections were incubated with 3-3’diaminobenzidine tetrahydrochloride (DAB) solution under microscopic monitoring, and then counterstained with hematoxylin. The stained PCNA positive tissue (gastric polyp) sections served as positive controls. A negative control, where primary antibody was replaced by PBS, was also stained parallelly.

H. pylori was detected under microscopy on the histological sections stained with a modified Giemsa staining method.

LI% was compare among groups, and the significance was analysed using Student’t test for unpaired data, P values less than 0.05 were considered statistically significant. 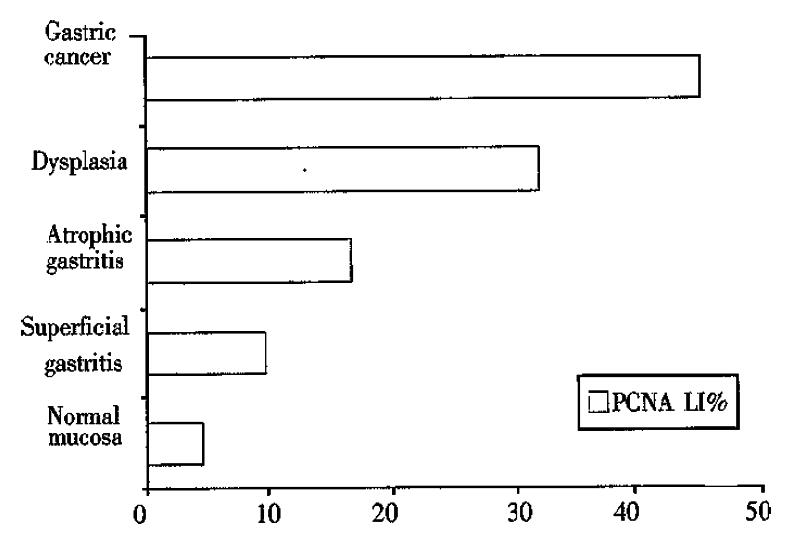 Figure 1 PCNA LI% in the study groups from normal gastric mucosa to gastric carcinoma regardless of H. pylori status.

Figure 2 shows the PCNA LI% in the groups associated with H.pylori status. Atrophic gastritis group was further classified into mild, moderate and severe subgroups based on the scores of atrophy and intestinal metaplasia. In superficial gastritis and mild atrophic gastritis groups, PCNA LI% in H. pylori positive patients was 13.14 ± 1.6 and 19.68 ± 2.22 respectively, significantly higher than 6.95 ± 0.78 and 11.34 ± 1.89 in H. pylori negative patients (P < 0.01); but there was no such difference in other groups (P > 0.05). 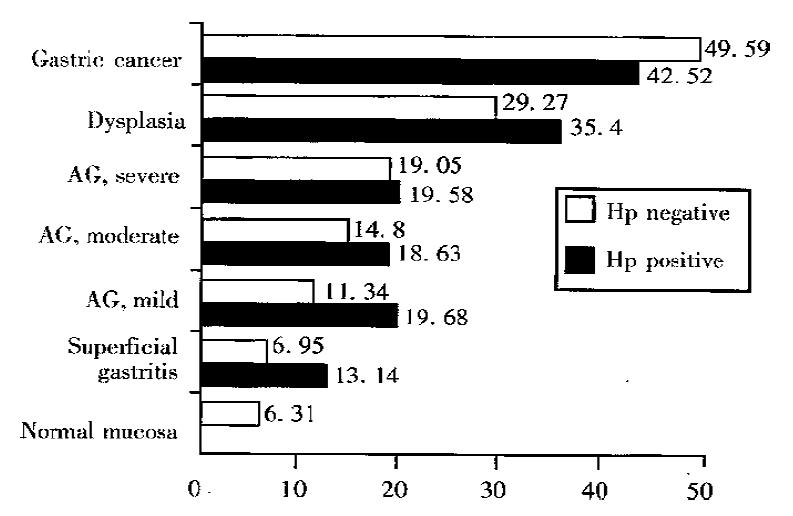 The etiology of gastric carcinoma has not been fully elucidated. In 1988, Correa[10] proposed a human model of gastric carcinogenesis based on the epidemiological, pathological and clinical findings. He postulated that gastric cancer develops through a complex sequence of events from normal to superficial gastritis, atrophic gastritis, intestinal metaplasia, dysplasia and finally to intestinal type gastric carcinoma, and that the chronic gastritis in the first step in the progression to malignancy. This postulation was proved correct later by several studies[11,12].

H. pylori is the primary etiological cause of chronic gastritis[13,14], and is associated with a sixfold increased risk of gastric carcinoma[2]. Long-term studies of H. pylori infection have provided evidence of a progression from H. pylori gastritis to atrophic gastritis, intestinal metaplasia, and dysplasia. H. pylori has been listed by the WHO as class 1 carcinogen for gastric cancer. But the exact mechanisms that H. pylori participates in gastric carcinogenesis are not clear.

Our results showed that gastric epithelial proliferative activity expressed as PCNA LI% increased progressively from normal mucosa to superficial gastritis, atrophic gastritis, dysplasia and gastric carcinoma, suggesting that increased gastric epithelial proliferation is associated with gastric precancerous changes and gastric cancer, and can be used as an indicator for evaluating the risk of gastric carcinogenesis.

Once H. pylori gastritis develops to the stage of gastric atrophy, the gastric acid secretion will decrease markedly, leading to changes in gastric bacterial flora, and subsequently promoted the endogenous formation of carcinogenic N-nitrosocompounds[19,20], and gastric epithelial proliferation. This may explain why H. pylori infection has less effect on gastric epithelial proliferation in late stages of gastric carcinogenesis.

Project supported by the Shanghai Municipal Commission of Science and Technolog, No. 954119023.