AIM: To investigate the potential role of intestinal microflora barrier in the pathogenesis of pancreatic infection.

METHODS: Fifteen dogs were colonized with a strain of E.coli JM109 bearing ampicillin resistance plasmid PUC18. The animals were divided into two groups. In experimental group (n = 8), acute necrotizing pancreatitis (ANP) was induced by injection of 0.5 mL/kg of sodium tarocholate with 3000 U/kg trypsin into the pancreatic duct. The control group (n = 7) underwent laparotomy only. All animals were sacrificed 7 d later. Mucosal and luminal microflora of intestine were analyzed quantitatively, and various organs were harvested for culturing, blood samples were obtained for determination of serum amylase activities and plasma lipopolysaccharide (LPS) concentrations.

CONCLUSION: Microecological disturbance could occur in ANP, and overgrowth of intestinal gram-negative bacteria may lead to translocation to the pancreas and other organs, becoming the source of pancreatic and peripancreatic infection.

Adult mongrel dogs weighing 13 kg to 18 kg were observed for at least 1 week, prior to the experiment, stools were cultured with eosin methylene blue agar containing ampicillin (100 ng/L). Animals without resistant bacteria in stool culture entered the experiment and received 20000 IU gentamicin orally for 2 d to suppress the indigenous enteric flora. E.coli JM109 bearing ampicillin-resistance plasmid PUC18 (approximately 109 colony-forming units) administered with food. For the rest of the experiment, drinking water was supplemented with 100 ng/L ampicillin. Stool samples were cultured with eosin methylene blue agar (supplemented with 100 ng/L ampicillin), Colonization was considered established when culture was positive for 3 successive days. Fifteen dogs were then randomly divided into two groups: ANP group (n = 8) and control group (n = 7), and laparotomy was performed under general anesthesia (i.v. thiopentalsodium). In ANP group, pancreatitis was induced by injection of 0.5 mL/kg sodium taurocholate with 3000 IU/kg trypsin into the pancreatic duct under pressure of 7.8 kPa. The dogs in the control group received laparotomy only.

Before the operation and on days 1, 2, 4 and 7 postoperatively, blood samples were obtained for determination of serum amylase activities (iodium-starch method) and plasma LPS concentrations (LAL test), and blood was cultured for aerobic and anaerobic bacteria on each postoperative day. All dogs were killed on the 7th day after operation. Under strict aseptic conditions, specimens of tissues from mesenteric lymph nodes (MLN), liver, pancreas, spleen, kidney and lung were harvested, weighed, and homogenized. Ten μL of each homogenate was cultured for aerobic and anaerobic bacteria. All bacteria isolated from organs were cultured in luria-bertani (LB) supplemented with 100 ng/L ampicillin for 24 h. Positive germs were initially identified as resistant bacteria. Final identification of those strains was accomplished by confirming the presence of plasmid PUC18. Plasmid DNA was purified by an alkaline lysis method and subjected to restriction digestion with endonuclease EcoR1 (Sigma Corp.) in 37 °C water for 1 h. Ten μL DNA fragments were separated by electrophoresis through horizontal 0.8% agarose gel, stained with ethidum bromide and photographed under ultraviolet lamp in 590 nm.

Jejunum, cecum, ileum and content of cecum were harvested, weighed and homogenized in 5 mL physiological saline. Homogenate (0.5 mL) was serially diluted (10 times), and 10 μL dilution was plated on selective media for E.coli, enterococci, bacteroids, bifidobacteria and lactobacilli, respectively, and incubated at 37 °C for 24-48 h, aerobically or anaerobically for 48 h, positive specimens were subcultured and the bacteria identified by standard procedures.

Sections of cecum and pancreas were stained with hematoxylin and eosin and examined under light microscopy.

Data were analyed by Student’s t test, and results were expressed as x-± s. Differences were considered significant when P < 0.05).

Laboratory tests showed significant hyperamylasemia on days 1, 2, 4 and 7 after operation in dogs with pancreatitis (Table 1). The pancreas in ANP group appeared enlarged and swollen with visible grey or black areas. Histologic examination revealed severe hemorrhagic necrotizing pancreatitis (Figure 1). In the control group, no abnormalities were found both macroscopically and histologically (Figure 2). 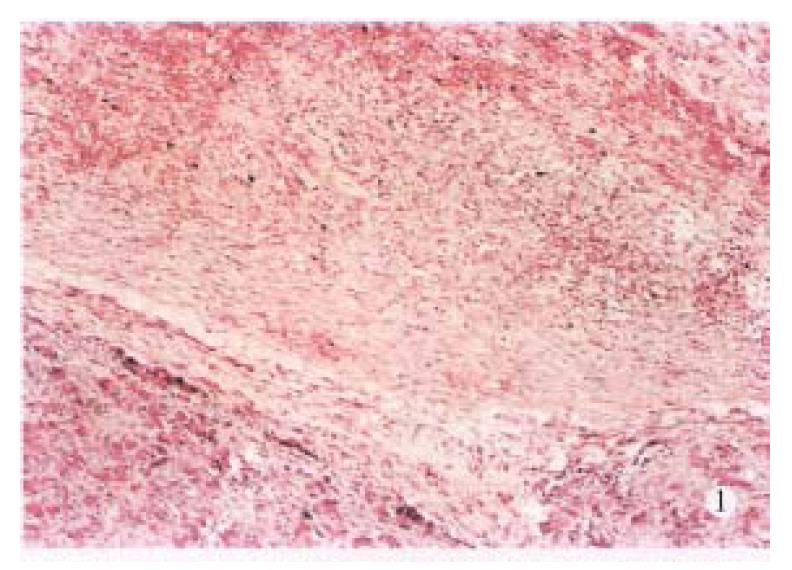 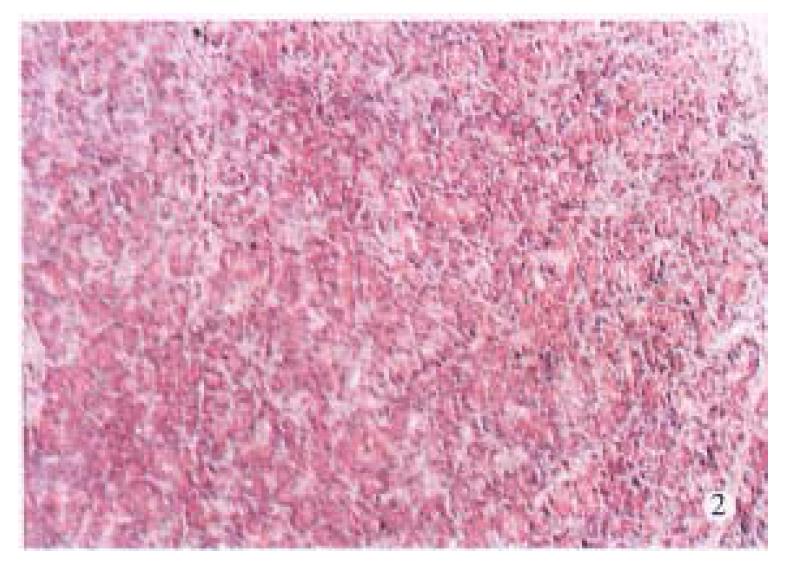 Figure 2 Light micrography of a normal pancreas. HE × 100
Intestinal morphology

Cecal mucosa were severely damaged in dogs with pancreatitis. The surface epithelium was denuded on the top of the villi, and there was an extensive neutrophilic granulocyte infiltration of the lamina propria. No pathologic changes were noticed in the controls.

The population levels of E.coli in the mucosa of jejunum, ileum, cecum and in the cecal content were increased significantly in ANP dogs on day 7 postoperatively (P < 0.05 or P < 0.01, Table 2), while bifidobacteria and lactobacilli were decreased obviously. The ratio of bifidobacterium/E.coli (B/E) was reversed (P < 0.05, Table 3).

The LPS concentrations in ANP group were elevated significantly as compared with those of the control group in each postoperative day (P < 0.05 or P < 0.01, Table 4).

Numerous studies have revealed that intestinal microecologic dystiosis may lead to decreased colonization resistance of the gut, which plays an important role in the pathogenesis of enterogenous infection. Runkel found that gram-negative germs overgrew in cecal mucosa 24-48 h after onset of pancreatitis, suggesting that microecological disturbance of intestine was an important factor for sepsis following pancreatitis[3]. Kazantsev used plasmid labeled E.coli (kanamycin-resistant) to confirm that intestinal bacteria could translocate to pancreas in pancreatitis, but he could not explain the relationship between bacterial translocation and enteric microecologic dysbiosis[4].

The present study showed that the enteric microecologic disturbance did take place following pancreatitis. The population levels of E.coli were increased significantly, while the bifidobacteria and lactobacilli were decreased obviously. So the main manifestation of the disturbance of enteric flora were overgrowth of opportunistic pathogens including aerobic bacteria and facultative anaerobes, and reduction of anaerobic bacteria such as bifidobacteria and lactobacilli, as reported earlier by Gianotti et al[5]. Blood and organ culture further showed that bacteria translocated to organs and blood in all animals with pancreatitis, and to pancreas in 87.5% of cases, 75% of them were E.coli JM109 colonized previously in the gut. These results provided substantial evidence that the gut was the primary source of pancreatic infection, and the translocation of the enteric overgrowing gramnegative germs in the gut, were the main pathogens of pancreatic infection.

The enteric microecologic dysbiosis following ANP might be explained by the overgrowth of gramnegative germs (mainly E.coli) and their inhibitory effect on the growth of dominant bacteria in gut such as bifidobacteria, resulting in the decreased colonization resistance and the immunity of host. This disturbance might lead to colonization of potential opportunistic pathogens and increase the chance of bacterial translocation. The intestinal epithelium was also injured by enteric ischemia and ischemia-reperfusion in ANP. In such circumstances, enteric bacteria which attached to and colonized on the surface of intestinal epithelium, could penetrate the mucosal barrier and translocate to MLN, other organs and blood, and caused infection in the pancreas which was seriously damaged by inflamation, hemorrhage and necrosis. The overgrowth of E.coli may also produce a large amount of LPS, becoming the source of endotoxemia following pancreatitis.

In conclusion, our data demonstrated that the enteric microecologic dysbiosis played an important role in the pathogenesis of infection complicating ANP. Taking effective measures to reduce the microecological disturbance and to protect the gut barrier function should be an important principle to prevent infection secondary to acute necrotizing pancreatitis.

Project supported by a grant from the foundation for specialized key scientific projects of the People’s Liberation Army.