AIM: To study the relationship between intercellular adhesive molecule-1 (ICAM-1) and liver cancer metastasis and to search for factors to predict metastasis of liver cancer.

RESULTS: All 6 cases of normal liver samples were negative in anti-ICAM-1 immunohistochemical staining, 80.0% (36/45) of HCC presented various ICAM-1 expression. The number of positive cells was a little higher in large tumors, tumors with intact capsule and metastasis, but there was no significant difference. Two cases with cancer embolus also had high ICAM-1 expression. ICAM-1 concentration in HCC (13.43 ± 0.09) was higher than that in tumor surrounding tissues (5.89 ± 0.17, P < 0.01) and normal livers (4.27 ± 0.21, P < 0.01). It was also higher in metastasis group (20.24 ± 0.30) than in nonmetastasis group (10.23 ± 0.12, P < 0.05). Northern blot analysis revealed that ICAM-1 expression at mRNA level was also higher in HCC and cancer embolus than that in tumor surrounding tissues and normal livers.

CONCLUSION: Tissue ICAM-1 could indicate the growth and metastasis of HCC, and may be an index that can predict liver cancer metastasis.

Tumor metastasis is one of the main causes of poor prognosis of hepatocellular carcinoma (HCC)[1]. The processe of metastasis includes dissociation of tumor cells from primary location; arrest, adhesion and extravasation of metastatic tumor cells. Adhesive molecules on endotheliocyte suchas selectin cause circulating tumor cells to roll along the surface. Other molecules on tumor cells including intercellular adhesive molecule-1 (ICAM-1), vascular cellular adhesive molecule-1 (VCAM-1) and so on, subsequently stop the cells completely, then extravasated through the blood vessels into selective target tissues. During the metastatic cascade, tumor cells interact with various host cells (endothelial cells, platelets or lymphocyte), and/or extracellular matrix and basement membrane components, the homotypic and heterotypic cell clumps form a multicellular embolus, which can enhance the survival, arrest and invasiveness of tumor cells[2]. The metastatic potential of cancer cells is related to the activity of their surface adhesive molecule[3]. Recently, it was noticed that ICAM-1 plays an important role in this processe. In this study, we investigated the relationship between ICAM-1 expression and the metastasis of HCC.

The tissues of HCC used for immunohistochemical study were collected from 45 patients (39 males and 6 females, aged 10-82 years with a median of 51.1) who had undergone hepatectomy for HCC. All the cases were diagnosed pathologically. Eighteen of the patients were in early stage (without symptoms and signs of HCC), and 27 in moderate stage (having symptoms and signs of HCC, but no ascites, jaundice and long distance metastasis). Thirty patients had positive AFP (≥ 30 μg/L) and 15 had negative AFP. The median diameter of the resected tumor was 6.7cm (1.5-18), 30 had large tumors (> 5 cm) and 15 were had small tumors (≤ 5 cm). Patients with embolus in portal vein and its main branch or with intrahepatic and ultrahepatic metastasis nodules belonged to the metastasis group, the other patients were to nonmetastasis group. Six normal livers were from the surrounding noncirrhotic liver tissues of pathologically proved benign tumors (4 hemangioma, 1 adenoma and 1 cyst).

The tissues used for detection of ICAM-1 were collected from 40 patients with HCC, 20 of them had large tumors and 22 encapsulated: 9 patients were in early stage and 31 in moderate stage. Positive AFP was found in 30 cases. There were 16 patients in the metastasis group, and 24 in nonmetastasis group. The 8 normal liver tissues were collected form thesurrounding noncirrhotic tissues of pathologically proved benign liver tumors (5 hemangioma, 1 adenoma and 2 cyst).

Indirect immunoperoxidase staining The fresh specimens embedded by O.C.T were frozen in liquid nitrogen, and then stored at -70 °C. Serial frozen sections (6 μm) of liver specimens were fixed with acetone. After preincubated with human serum to reduce background, the sides were incubated with the primary antibody (1:50) at 4 °C overnight, biotinylated rabbit anti mouse immunoglobulin (1:200) was used at 37 °C for 1 h, added with avidin biotin HRP mixture (1:100 v/v), and counterstained with hematoxylin.

Data analysis Significance was assessed by Student’s t test. The results were expressed as x-±s. 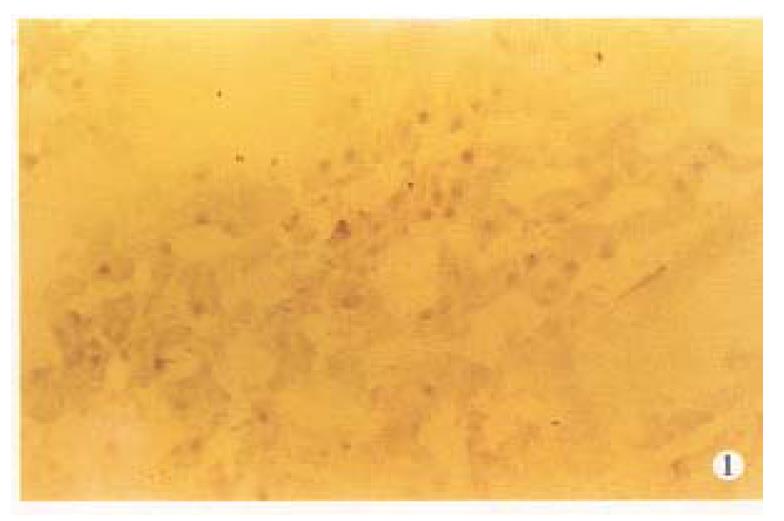 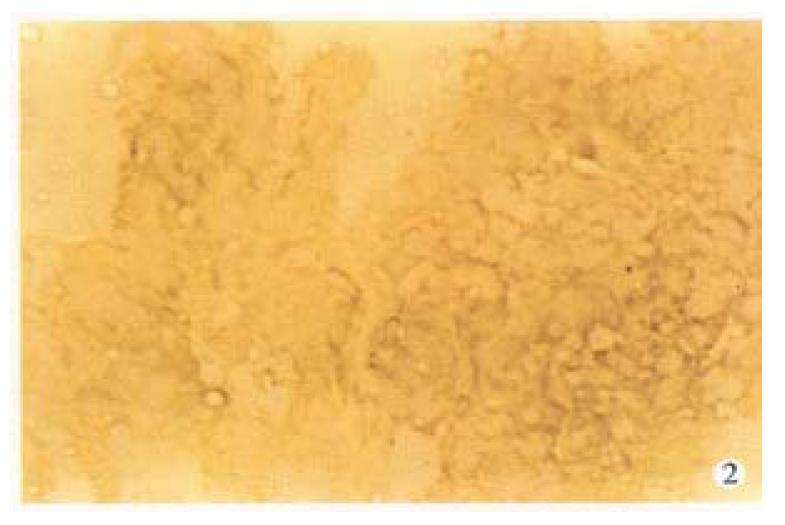 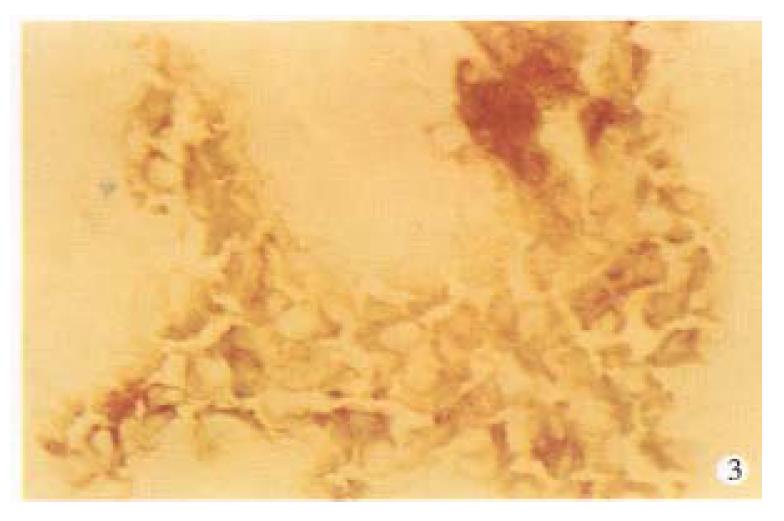 Dot immuno-blot was employed in semi-quantive analysis of tissue ICAM-1 (Figure 4). Table 1 demonstrats that ICAM-1 content in HCC was about two-fold higher than that in the tumor surrounding liver tissues and normal controls (P < 0.01), no significant difference was found between the latter two. 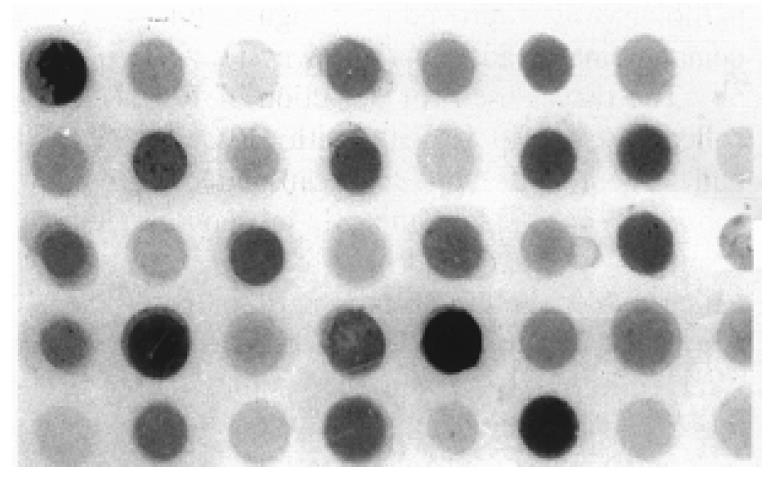 The expression of tissue ICAM 1 was also compared with tumor biological characters (Table 2), ICAM-1 in cancer tissues was only related to tumor metastasis, and there was no relationship with tumor size and capsule formation.

In this study, special DNA probe was used in Northern blot for detecting ICAM-1 mRNA, two transcripts with 3.3 kb and 2.4 kb in length was defined. β-actin was acted as internal standard. The data obtained from image analysis indicated that ICAM-1 mRNA expression in tumors was higher than that in tumor surrounding liver tissues and normal controls as well as cancer embolus (Figure 5). 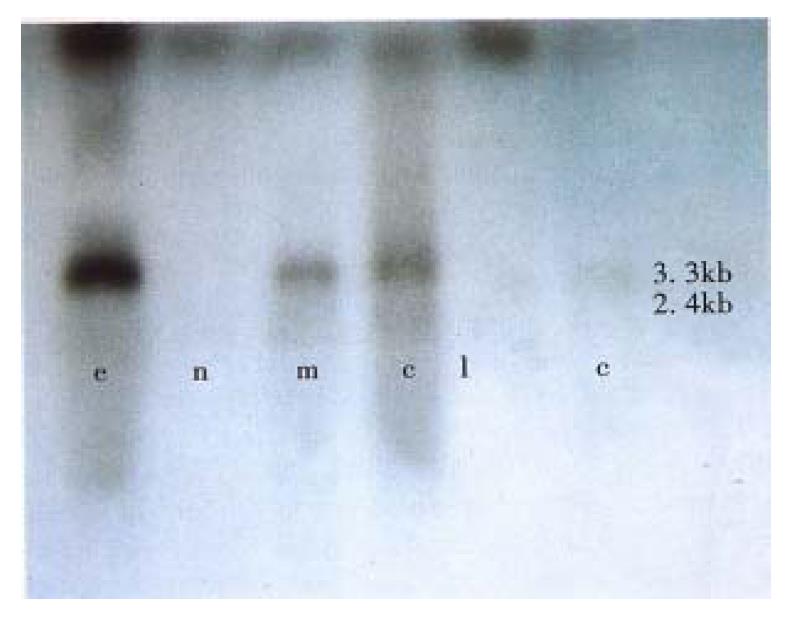 Intercellular adhesive molecule-1 (ICAM-1, CD54), a transmembrane glucoprotein, is a member of the immunoglobulin superfamily and functions as counterreceptor for leukocyte function associated antigen-1 (LFA-1, CD11a/CD18) and complement receptor type 3 (MAC-1, CD11b/CD18)[5]. It mediates homotypic and heterotypic cell interaction, not only plays an important role in the tumor genesis, but also can reflect tumor curative effect[6], and may be a critical factor in the process of bloodborne metastasis of cancer[7]. Recently it wasfound that ICAM-1 plays an important role in tumor recurrence and metastasis. Hung et al[8] found that anti-ICAM-1Ab can prevent the growth of APH-77 tumors in SCID mice by altering the homing and growth of tumor cells in certain anatomical sites. Most of normal tissues do not express ICAM-1, but ICAM-1 expression has been observed in many tumors, such as renal cancer, uterine cancer, lung cancer, gastric cancer, bladder cancer, etc. Santarosa et al[9] demontrated that renal cancer recurrence after operation was related to ICAM-1 expression in cancer tissues and patients with < 50% of ICAM-1 positive cells in cancer tissues had prolonged disease-free survival after a median follow-up of 60 months.

In this study, all 6 cases of normal liver sample were negative in anti ICAM-1 immunohistochemical staining, 36/45 HCC presented various ICAM-1 expression. The rate of positive cell was a little higher in large tumors, tumors with intact capsule and tumors with metastasis, but there was no significant difference. It has been noticed that 2 cases with enbolus also had high ICAM-1 expression. As indicated in semiquantitative analysis of tissue ICAM-1, ICAM-1 concentration in liver cancer was higher than in tumor surrounding liver tissues and normal livers. Tissue ICAM-1 was higher in metastasis group than that in nonmetastasis group. Northern blot analysis revealed that ICAM-1 expression at mRNA level was also higher in HCC and cancer embolus than in tumor surrounding liver tissues and normal controls. So it was suggested that ICAM-1 might be one of the characters of liver cancer, and could be a diagnostic indicator for metastatic status of liver cancer.

The deduced ICAM-1 amino acid sequence analysis revealed the presence of C3/C4 binding protein consensus sequence between residues 341 and 404, so ICAM-1 may be involved in C3b binding. Since C3b binding protein generally acts to accelerate the dissociation of active complement complexes, ICAM-1 may help the tumor escape immune destruction, providing an important property needed for successful metastasis. Functioning as a ligand of LFA-1, ICAM-1 can establish the heterotypic adhesion of tumor cells with migratory and invasive leukocytes present in the tumor cells, enabling individual cell to dissociate from primary tumor and go into circulation[10]. There is soluble ICAM-1 (sICAM-1) in serum, which comes from proteolytic cleavage of membrane associate ICAM-1. Since LFA-1 could also be blocked with soluble ICAM-1, sICAM-1 may also block the attachment of cytotoxic T cell and/or NK cells to cancer cells. This could be one of the mechanisms of cancer cells escaping from the immunosurveillance system of the host, and can inhibit lymphocyte mediated cytotoxicity, therefore a favorable environment for tumor cell proliferation would be created[11]. Spontaneous regression of human liver tumor was quite rare and the tumors were unusually resistant to various immumotherapy, probably due to the high content of sICAM-lin those patients.

In our experiment, we also found that there was no statistically significant difference in ICAM-1 expression between tumor surrounding liver tissues and normal livers, and between tumor metastasis group and nonmetastasis group. So we think that ICAM-1 reflects the metastatic ability of cancer cells but not the cancer environment.

In conclusion, tissue ICAM-1 could reflect the growth and metastatic status of HCC and may be a factor to predict liver cancer metastasis.

Supported with Grant for Leading Specialty by the Shanghai Health Bureau, National Natural Science Foundation No.396707 and China. Medical Board No.93-583