Gastrointestinal double constrast radiography (DC) is a major procedure for gastrointestinal (GI) diagnoses, even for small and early structural lesions. Based on experiences reported at home and abroad, GI radiologists in China have studied DC in many aspects in the past few decades: including mechanisms of imaging, physical factors influencing appearance of images, better preparation of images barium surfate (contrast media), substructure of area gastrica, measurement of image density, significance of some phenomena and signs, etc. Great efforts have been dedicated to its clinical application and popularization throughout the country and noticeable achievements have made.

Barium suspension (BS) and gas are contrast media for DC. Both are fluids. Being influenced by principles of fluid mechanics, most DC images often appeared pleomorphic andchangeable.

Wetting It is defined as a phenomenon occurring upon the contact of the liquid (e.g. BS) with solid (e.g. GI mucosa). Adoption of a kind of BS which has appropriate wetting as wellas high concentration andlow viscosity, is an important prerequiste for DC. Chinese radiologists have made significant improvement in the DC quality of home-made barium preparations[5-9].

Barium collection in recesses More BS is retained in the concave recesses of theangles formed by any protruding or depressing part of the mural surface. This is induced by the cohesive force of thefluid and the surface phenomenon and has considerable significance in differentiating protrusion (blurred in outer side) from depression (blurred in inner side) in nature of lesions. (Figure 1). 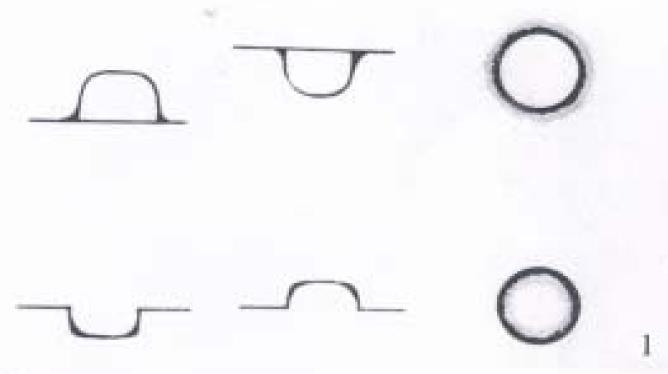 Ad-gravitational wall (Ad wall) and Ab-gravitational wall (Ab wall) The flow, spreading, distribution and stagnation of BS in the air filled sac (such as GI lumen) is much influenced by the effect of gravity. The wall of the enclosed sac may be divided into 3 catagories: Ad wall, Ab wall and lateral wall, just like the floor, ceiling and lateral wall of a room. These denominations of the walls are relative and interchangeable, which depends on the body position adopted at the time of examination. For example, the anterior wall of stomach is Ab wall in supine position, but will be changed to Ad wall in prone position. One notable point is that the lesion (e.g. polyp or ulcer) may give similar or entirely different manifestations when it is located on the Ad wall or Ab wall. Cretian phenomena (e.g. hanging droplet) can occur only on Ab wall whereas others (e.g. barium pool) are limited to the Ad wall These condotions and terms in DC imaging are very helpful in understanding and describing the shape and position of lesions (Figure 2). 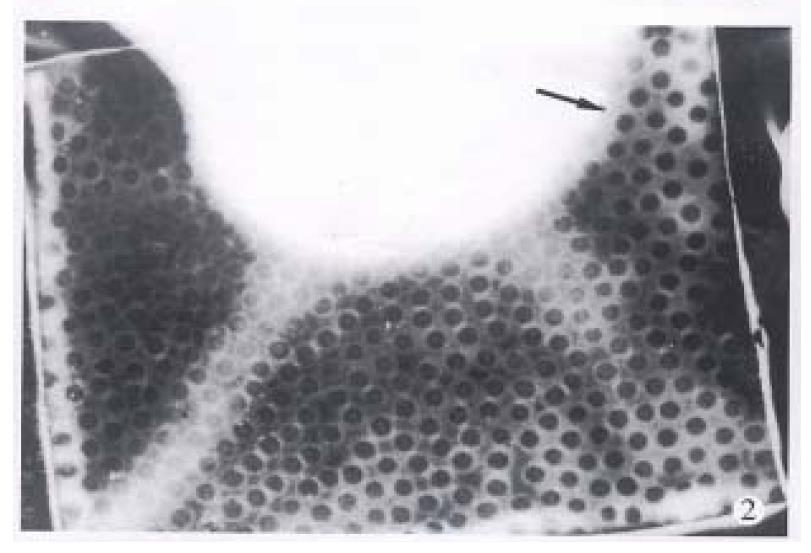 Figure 2 Model DC. The larger round images are protrusions and the smaller ones are depressions. They are all located on Ad wall in A and in Ab wall in B. Note the difference in protrusion (blurring in outer) and in depression (blurring in inner); and the difference of the same lesion in Ad wall (A) or in Ab wall in B.
SUB-STRUCTURE OF AREA GASTRICA[10-13]

Using a flexible specimen holder and magnifying technique, experimental DC was made on 10 human gastric specimens to investigate the differences in appearance of area gastric (AG, 2 mm-3 mm in size) by the authors. The following new finer distinctions were discovered: silkworm-like and petal-like AG occurring in 25%-74%; sub-groove and sub-area of AG; the “tep-over lines” are helpful in discrimination AG of the overlapping Ad wall or Ab wall. The diagnostic significance of such detailed AG study in early gastric carcinoma has been evaluated. (Figure 3, Figure 4, Figure 5, Figure 6, Figure 7, Figure 8).

Figure 3 Gastric specimen magnified (× 10) with a biomicroscopy shows the substructures of AG. 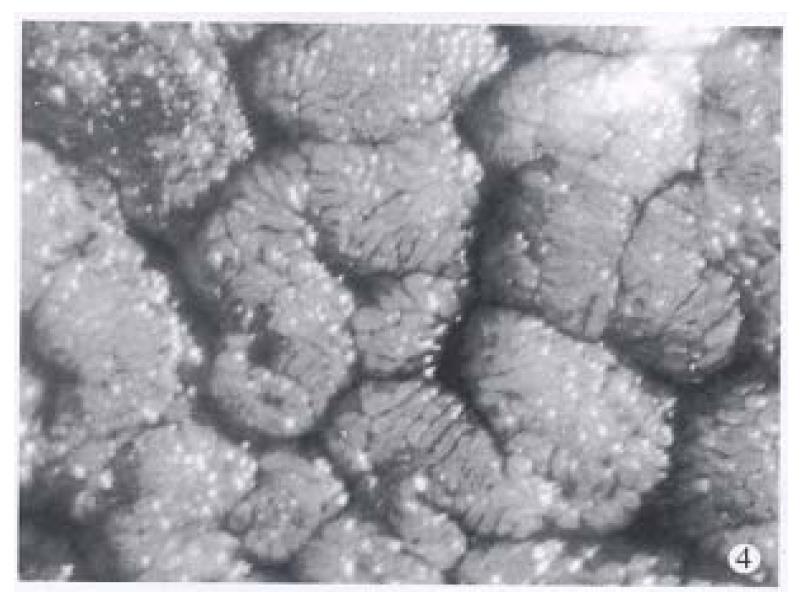 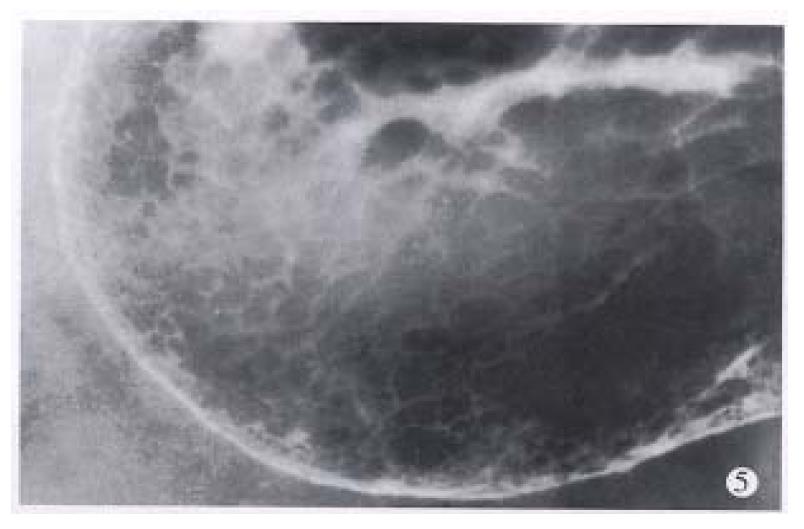 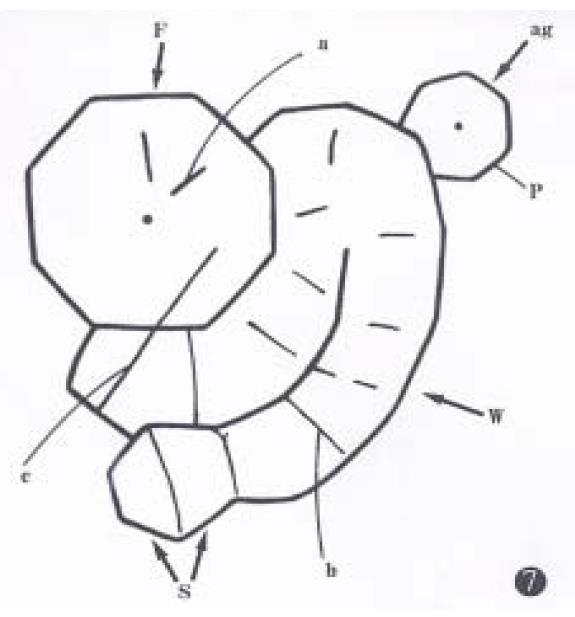 Figure 8 Gastric specimen with barium coated and radiographed by soft X-ray showing the ulcer crater and the grooves of AG surounding it.
NEASURMENT OF IMAGE DENSITY[1,3,4]

The image density (E) the figure obtained from a densitometer, i.e., the logarithm of the degree of light attenuation (“blackening”) of the part of the film, was examined by our group. E is an important quantification standard for more subtle differentiation between various parts of DC. We measured the E value of different phases in 97 DC cases. It is the first reported series of measurement of E value in DC.

Some DC phenomena and signs have been investigated. The results showed that several of them are extremely valuable for determining the shape, site and nature of lesions (Table 1).

Vertical plate phenomenon It is the appearance of BS coating surface which lies in a direction tangential to the X-ray beam. It is similar to the change in transparency of a glass plate when its position is turned from transverse to vertical. The depth of BS in the site of vertical plate is much thicker than other parts. They, therefore, occur as single or multiple dense white lines. The majority of anatomical and pathological structures can be better revealed by this phenomena.

Overlapping white line The term is used to denote partially visible white line seen through a relatively shallow barium pool of the ad-gravitational wall. The overlapping white line is produced by linear image of the vertical plate that projects within the field of the Ab wall. We can always trace the existence and nature of such lesions and to determine its Ab wall origin (Figure 6).

Tide and rock phenomenon A protrusion (rock) within the shadow of barium pool (water tide) is rather similar to the relation between the ebb and tide of water and a rock in it. A low and small protrusion could only be demonstrated at “shallow water tide” phase (Figure 9). 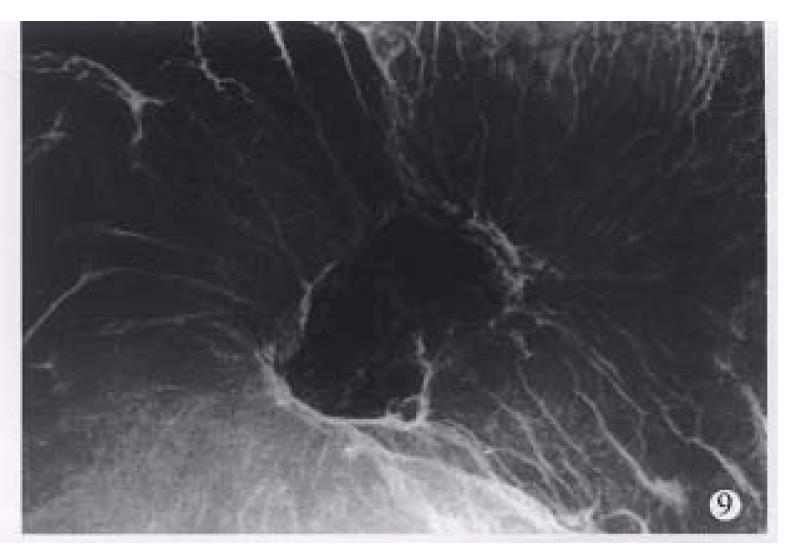 Figure 9 The same sized small round protruions located in Ads wall. Note the different appearance in various phase of “tide and rock”. Those are most distinctable in “low water tide” (arrow).

Eye-like sign It is a characteristic feature of polyp (Figure 10, Figure 11). 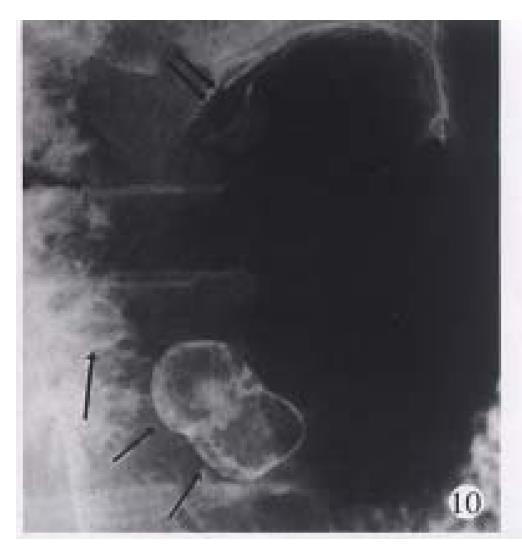 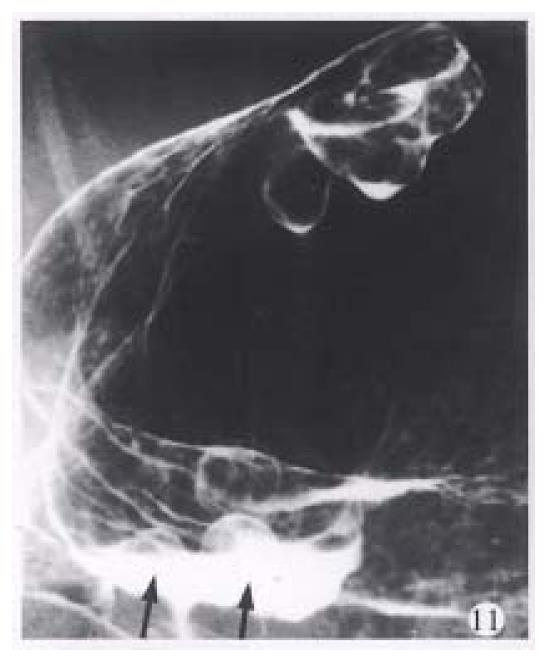 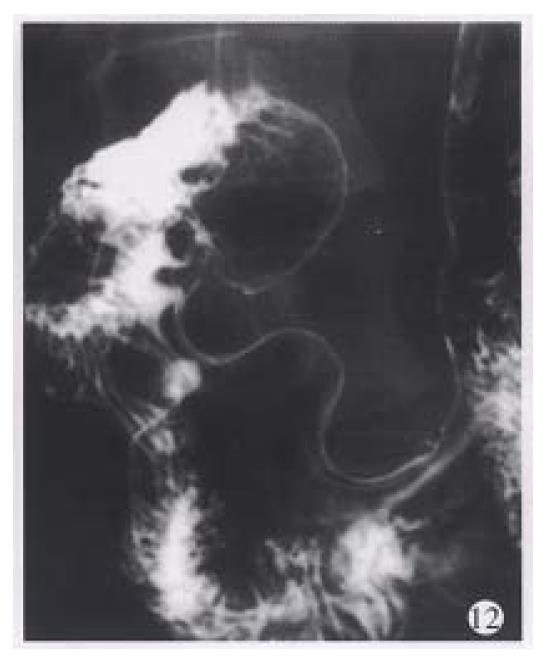 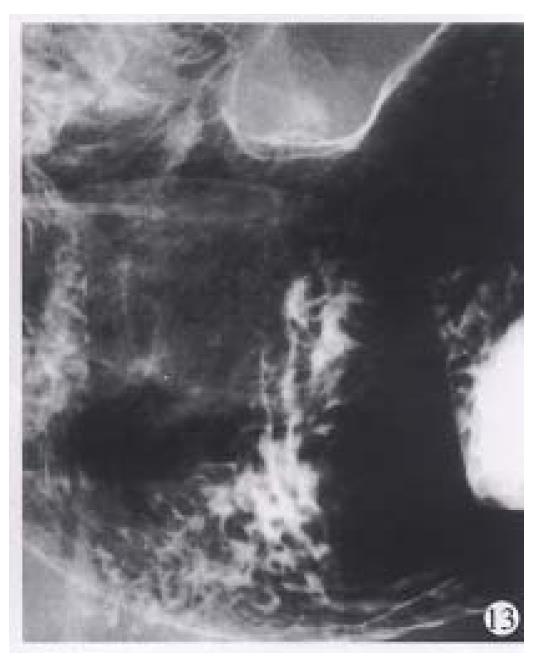 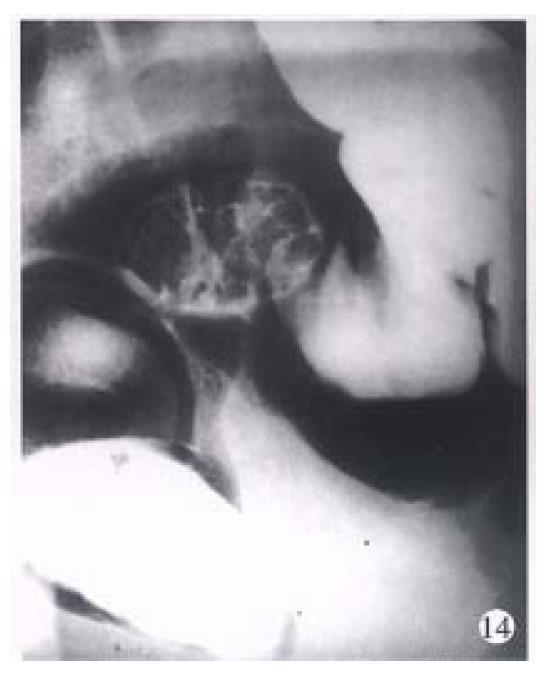 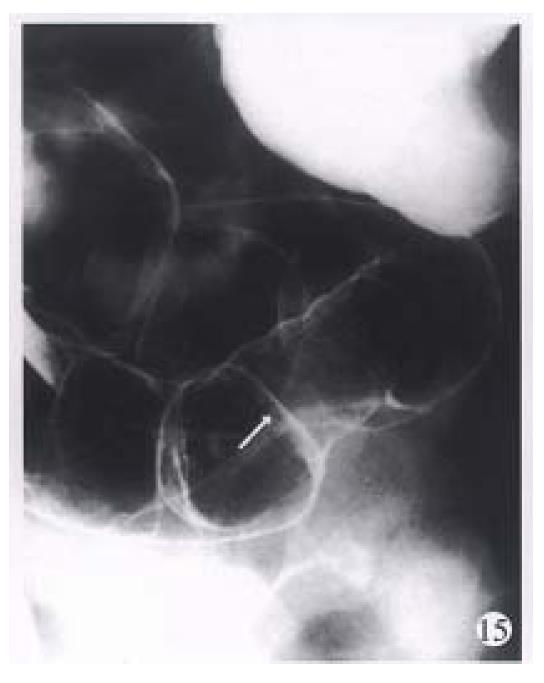 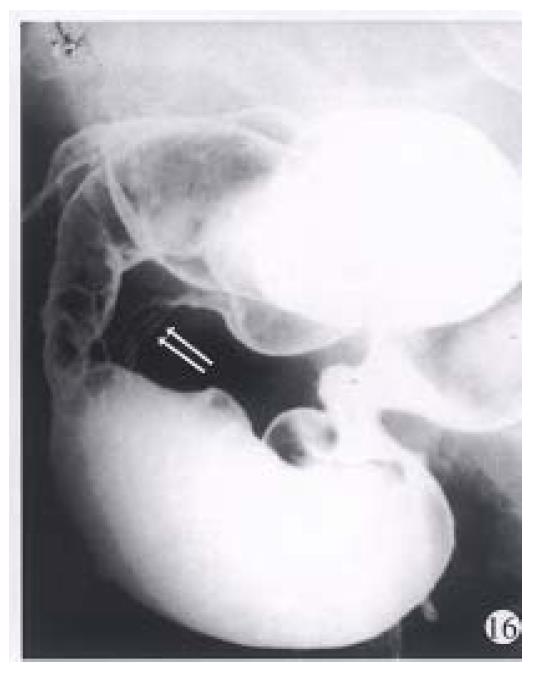 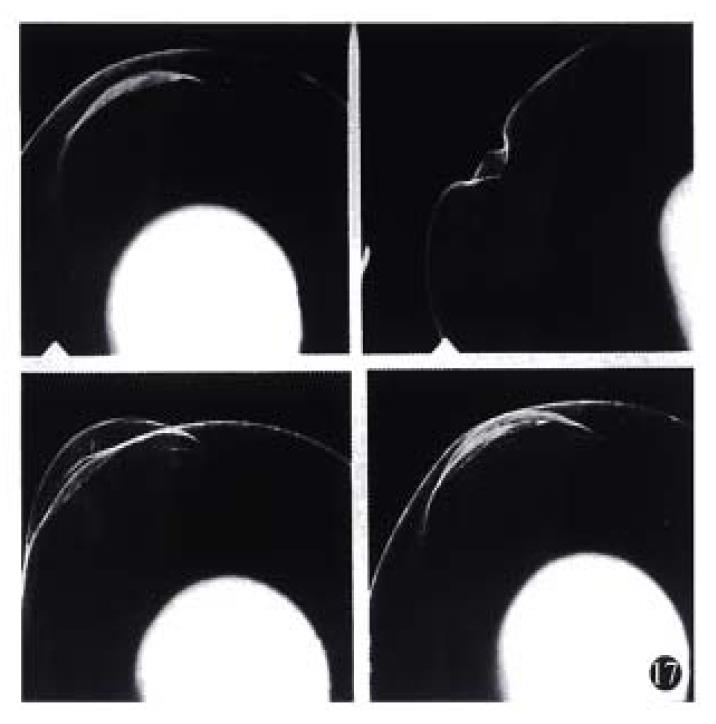 Figure 17 Model DC, demonstrating the mechanism of multiple mural lines sign. The “infiltration” of the lat-eral upper wall of the sac made the part of the wall less expansion (right upper picture, horizontal projection) and appeared as multiple lines of rigidifying, roughing and “whiter” in image density in other 3 pictures taken in perpendicular projection. 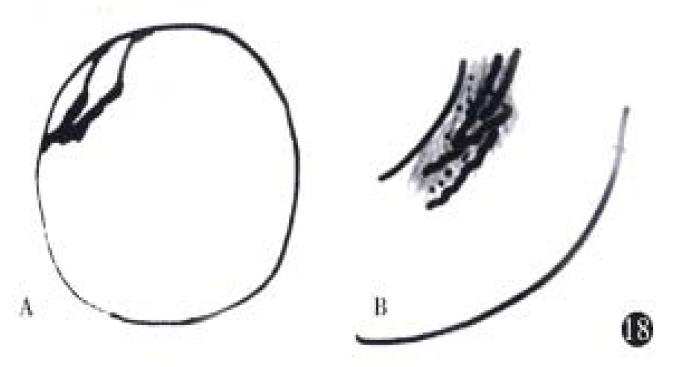 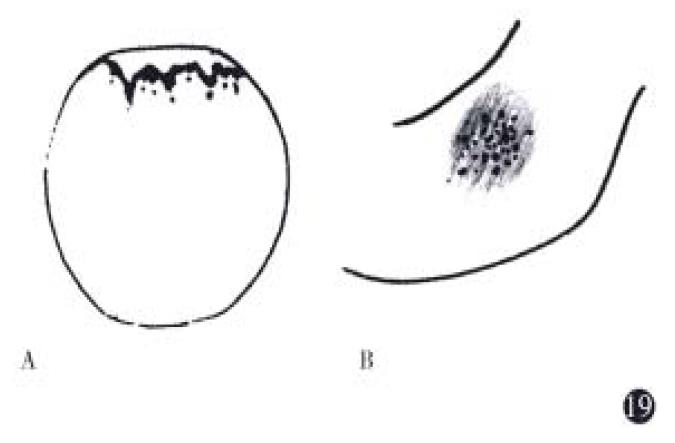 Figure 19 Diagram of foggy droplets sign. More BS have been stagnated on the irregular surface of Ab wall carcinoma (A) and “foggy doplets” appearance was formed (B). (A, Horizontal projection; B, perpendicular projection.)

GI radiologists in China have been giving increasing emphasis on the application and popularization of DC. Seminars have been held each year in Shanghai and other regions since the 80s. Among the radiological techniques to be popularized, DC may be a prominent one in terms of duration and scale of its nation-wide recommendation throughout these years.

In many regions of China, DC has been accepted as a routine technique for GI barium examination; and is one of the standard of assessment in testing the specialty level of radiological practice.

Preliminary data of inquiry from 315 radiology departments showed that among up to 90000 DC cases, the detectability of GI structural lesions in DE was about 8% higher than when traditional barium studies were employed. The number of early GI cancer found by DC has been increased markedly.

According to a general survey in China, up to 41% of radiological departments have not yet employed DC; and in more than 20%, DC technology has not attained to a qualified standard. Besides, up to 31% DC cases were misdiagnosed because of unfamiliarity with DC appearances, or were not properly interpreted. This status suggests that more strenuous education of DC should be continued.