Since the central nervous system was first demonstrated to be involved in regulation of gastric function by Pavlov[1], and Selye[2] established the stress theory that physicopsychiatric stress altered physiological functions[3], electrical stimulation or lesion of specific brain nuclei identified specific sites in the hypothalamus, limbic system, and medulla that influence gastrointestinal functions. A plethora of peptides have been characterized in the brain by immunohistochemical and molecular biological techniques[4]. The development of retrograde tracing techniques combined with immunohistochemistry reveals that these peptides are localized in the nerve fibers or cell bodies of the hypothalamus and medulla which are important sites for autonomic nervous outflow to the gastrointestinal tract[5,6]. Based on these studies, Taché first reported the effect of central neuropeptides in regulation of gastric functions[7,8]. Since then, more than 40 peptides have been examined and it is well established that many neuropeptides, such as thyrotropin releasing hormone (TRH), corticotropin releasing factor (CRF), neuropeptide Y (NPY), bombesin and somatostatin, mediate a central nervous system induced stimulation or inhibition of gastrointestinal function[9,10]. On the other hand, the liver is also richly innervated[11,12] and retrograde tracing technique has revealed hepatic innervation through the vagus originating in the medulla[13], where abundant neuropeptides exist. This review introduces the current knowledge of central nervous system regulation of hepatic functions by various neuropeptides.

TRH exists in the central nervous system and abundant TRH immunoreactive nerve terminals and TRH receptors are localized in the dorsal vagal complex including the vagal motor nucleus and the nucleus of the solitary truct[14,15]. Neuropharmachological studies demonstrated that TRH displayed a vast array of central nervous system-mediated actions unrelated to its physiological roel in the regulation of the pituitary thyroid axis[16]. TRH injected into the cerebrospinal fluid or into specific brain nuclei exerted a variety of behavioral effects. Accumulated evidence also demonstrated that TRH had potent central nervous system mediated stimulatory effects on gastrointestinal secretion, motility and transit, as well as on the development of gastric ulceration in rats and other animals[7,8,17,18] Mapping studies using microinjection of TRH or TRH analogs into selective nuclei have identified brain sites important for stimulation of gastric secretion and motility. The gastric secretory response has been elicited by microinjection of TRH into the lateral and the ventromedial hypothalamus[19]. More sensitive sites have been identified in the brainstem including the dorsal vagal complex, the nucleus ambiguus and the raphe pallidus[20-22].

We studied the effect of central TRH analog on hepatic microcirculation in anesthetized rats[29]. We used the stable TRH analog, RX 77368, which has the same receptor affinity and about the times the potency of natural TRH. In rats under urethan anesthesia, hepatic microcirculation was assessed by the hydrogengas clearance method. Intracisternal injection (the injection into the cisternal magna of the brain) of TRH analog induced stimulation of hepatic blood flow by 17%-74% in a dose dependent manner ranging from 5 ng to 100 ng. This stimulatory response of hepatic blood flow to central TRH analog occurred during the first 15-min observation period, reached a plateau at 30 min and returned to basal value at 60 min. On the other hand, intravenous injection of the TRH analog did not modify hepatic blood flow, confirming the central but not peripheral action of the TRH analog. Although this increased hepatic blood flow by central TRH analog was not modified by spinal cord transection, it was reversed by atropine, vagotomy, and N-G-nitro-L-arginine methyl ester, an inhibitor of nitric oxide and indomethacin, indicating that TRH acted in the brain to stimulate hepatic blood flow through vagal, muscarinic, prostaglandin and nitric oxide pathways. Mapping studies by microinjection of TRH analog into the medullary nuclei revealed that the left but not right dorsal vagal complex was a responsive site for TRH on modulation of hepatic blood flow[30]. This finding agreed well with anatomical evidence that hepatic vagal nerve is originated in the left, but not right, dorsal vagal complex[13].

Although in adult animals the liver is normally in a state of growth arrest, once the liver is damaged or impaired because of hepatic injury or liver resection, hepatic regeneration or proliferation is immediately started. Seventy percent partial hepatectomy[31] performed in rats initiated a very striking response in the liver remnant through hypertrophy and hyperplasia, and returned to its original size in 7-10 d[31]. Hepatocytes in the non stimulated liver were essentially arrested in the G0 state. After partial hepatectomy, growth related events started almost instantly as the cells underwent the transition from G0 to G1 state(prereplicative phase), which lasted about 12 h, at which point DNA synthesis (S state) began and peaked at about 24 h. Mitosis a similar course 6-8 h later[32]. Many factors, such as hormones, peptides and cytokines, were thought to be involved and may interact synergistically to initiate and maintain hepatic proliferation. The autonomic nervous system was also suggested to play a role in the liver regeneration and regulation of hormones and growth factors related to hepatic proliferation. Partial hepatectomy suppressed the sympathetic nerve activity[33] and plasma adrenaline and noradrenaline increased immediately after partial hepatectomy and α-blockade reversed DNA synthesis induced by hepatectomy[34,35], indicating the involvement of an adrenergic effect on hepatic regeneration. The parasympathetic nervous system was also suggested to play an important role in hepatic proliferation. Subdiaphragmatic vagotomy more strongly suppressed DNA synthesis after partial hepatectomyas compared with the splanchnicectomy[36], and selective hepatic branch vagotomy suppressed or delayed liver regeneration in partially hepatectomized rats[37]. Moreover, lesion of the ventromedial hypothalamus has recently induced hepatic DNA synthesis through the vagal nerve[38].

These findings led us to speculate that central TRH might also protect against experimental liver damage, so effect of central injection of TRH on CCl4 induced liver injury has been investigated[42]. Rats were coadministered CCl4 (2 mL/kg, ip) with TRH analog injected intracisternally and liver damage was assessed by serum alanine aminotransferase (ALT) levels. Intracisternal, bnt not intravenous, injection of TRH analog dose-dependently protected against CCl4 induced liver damage and this protective effect of central TRH was also block by hepatic vagotomy.

CRF is one of the brain neuropeptides, and effect of central CRF on physiological, pharmacological, and pathophysiological regulations of the gastrointestinal tract have been reported. Injection of CRF into the cerebrospinal fluid or the brain nuclei, such as paraventricular nucleus or loecus ceruleus inhibited gastric motility and secretion[43-46], and enhanced colonic motility through the autonomic nervous system[47,48]. Since CRF is known to act in the hypothalamus and stimulate the sympathetic nervous outflow, the opposite effect to TRH on hepatic function was expected when injected in the central nervous system.

We studied the effect of central CRF on hepatic microcirculation in anesthetized rats[49]. In rats under urethan anesthesia, hepatic microcirculation was assessed by the hydrogen gas clearance method and laser Doppler. Intracisternal injection of CRF induced inhibition of hepatic blood flow by 18%-36% in a dose dependent manner, ranging from 1 μg to 5 μg. This inhibitory response of hepatic blood flow to central CRF was noted during the first 15 min observation period, reached a plateau at 30-60 min and maintained for more than 120 min. On the other hand, intravenous injection of the CRF did not modify hepatic blood flow, confirming the central but not peripheral action of the TRH analog. Although this deceased hepatic blood flow by central CRF was not modified by atropine and vagotomy, it was reversed by hepatic sympathectomy and 6-hydroxydopamine, which depleted noradrenergic fibers, indicating that CRF acted in the brain to inhibit hepatic blood flow through sympathetic and noradrenergic pathways. The effect of central injection of CRF on CCl4 induced liver injury has also been investigated[50]. Rats were injected with CCl4 (2 mL/kg, sc) and CRF was injected just before and 6 h after CCl4 administration. Liver damage was assessed by serum ALT levels. Intracisternal, injection of CRF dose dependently aggravated CCl4 induced liver damage and this aggravating effect of central CRF was block by 6-hydroxydopamine and chemical sympathectomy.

NPY, a 36 amino acid peptide of the pancreatic polypeptide family, was first isolated from porcine brain[51,52]. NPY was localized mainly in the peripheral nervous system[53], where it contributed to the innervation of the digestive organs, including the biliary tree[54]. In the brain, NPY nerve fibers and terminals, and NPY receptors were localized in the paraventricular nucleus of the hypothalamus and the dorsal vagal complex[55-57] which are important sites for the autonomic nervous system[58]. Central administration of NPY affected feeding behavior and visceral function[57]. The bile duct was richly innervated by autonomic nerves[59] and electrical stimulation of sympathetic and parasympathetic nerves and stimulation or lesion of certain hypothalamic regions[60] altered bile secretion[61,62]. With respect to the gastrointestinal tract, injection of NPY into the cerebrospinal fluid stimulates gastric acid and pepsin secretion, and pancreatic exocrine and endocrine secretion in rats and dogs[63-65]. Farouk et al[66] and we[67] have found an effect of central NPY on bile secretion in dogs and rats. The effect of intracisternal injection of NPY on bile secretion in urethan anesthetized rats was investigated[67]. Rats were anesthetized with urethan (1.5 g/kg, ip) and the common bile duct was cannulated to collect bile samples. Sodium taurocholic acid (30 μmol·kg·h) was infused intravenously to compensate for bile acid loss due to biliary drainage. Intracisternal NPY (0.02 nmol-0.12 nmol) dose-dependently stimulated bile secretion by 9%-20%. The secretory response occurred within the first 20-40 min after injection and lasted 120 min. On the other hand, intravenous injection of NPY (0.12 nmol) did not modify bile secretion, confirming that NPY did not leak from the cerebrospinal fluid to the peripheral circulation. Thus, central NPY stimulated bile secretion in a bile acid independent and bicarbonate dependent bile flow because central NPY increased only biliary bicarbonate secretion but not biliary bile acid, phospholipid or cholesterol secretion. In other words, central NPY stimulated ductal bile secretion. Although cervical cord transection, bilateral adrenalectomy or pretreatment with N-G-nitro-L-arginine methyl ester did not alter intracisternal NPY induced stimulation of bile secretion, atropine and bilateral cervical vagotomy completely abolished the stimulatory effect of intracisternal NPY on bile secretion, indicating that NPY acted in the brain to stimulate bile acid independent bile secretion through vagal and muscarinic pathways. Mapping studies by microinjection of NPY into the medullary nuclei have shown that the left dorsal vagal complex is a responsive site, like TRH on hepatic circulation, for NPY on stimulation of bile secretion[68].

Several peptides have been established to act in the brain to influence hepatic function (Figure 1). Bile secretion is modified by central administration of bombesin, opioid peptide and NPY, hepatic blood flow is altered by central CRF and TRH, hepatic proliferation is regulated by central β-endorphin and TRH, and central CRF and TRH interfere experimental liver injury. Among these peptides central TRH is the strongest candidate for playing an important role in hepatic physiological function. Through their use, new knowledge on central and peripheral mechanisms underlying brain regulation of hepatic function will be revealed. Further studies in regard to the physiological relevance of the central action of neuropeptides on specific brain sites should be performed for unraveling the underlying pathways mediating brain liver interaction. 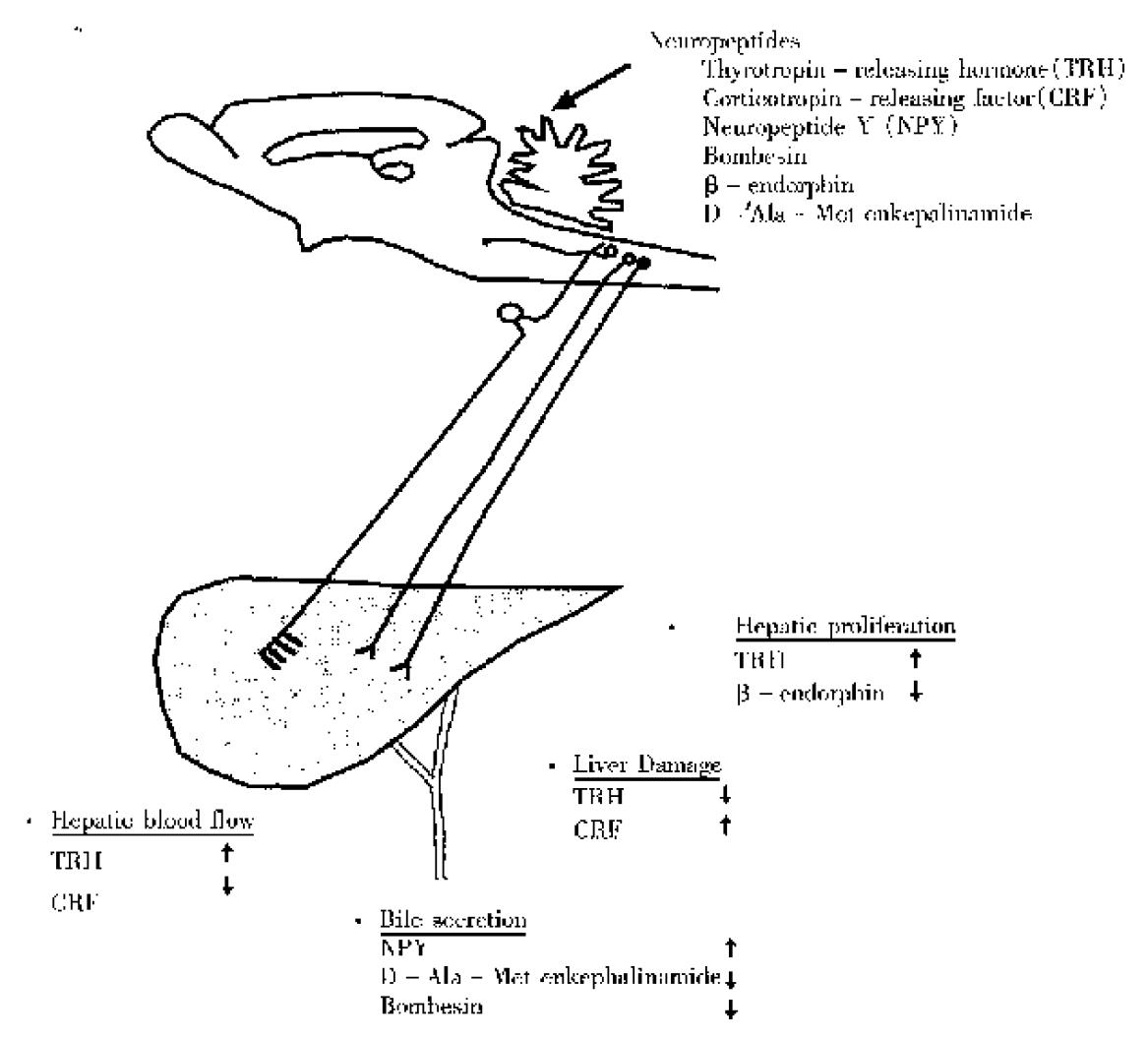 This work was supported by Japan Research Foundation for Clinical Pharmacology, the Akiyama Foundation, Kanae Memorial Foundation and the Ministry of Education, Culture and Science of Japan (No. 0767554, No. 09670503).