RESULTS: Sequence analysis indicated that the HCV isolate of this study belongs to HCV-II; SDS-PAGE demonstrated an Mr 23800 and an Mr 22000 recombinant protein band which amount to 14% and 11% of the total bacterial proteins separately. Western blotting and ELISA showed NS3 protein possessed greater antigenicity.

Since HCV (hepatitis C virus) was identified as the major cause of post-trans fusional non-A, non-B hepatitis by Choo et al[1] in 1989, the harm of this infectious disease to the human health has been gradually realized. Up to 50%-60% of the HCV hepatitis cases turn chronic, developed into cirrhosis and hepatocellular carcinoma. Due to lack of effective therapeutic methods, it is exceptionally important to prevent the transmission of HCV. As HCV is mainly transmitted through blood sources, the key to preventing the transmission of HCV is to screen the blood donors using specific and sensitive HCV diagnostic reagents. HCV NS3 antigen is necessary in anti-HCV diagnostic reagents because of the lower divergence in NS3 region of HCV genome and the strong antigenicity of NS3 protein. In addition, because of the early appearance and high incidence of the antibody against NS3 antigen. In this report, the HCV NS3 gene fragment was cloned and expressed in E. coli. The obtained NS3 antigen showed strong antigenicity, which provided the basis for developing HCV ELISA reagents.

MATERIALS AND METHODS
Sera and extraction of HCV RNA

Serum for cDNA synthesis was derived from a patient who comes from Hebei Province, which is po-sitive for anti-HCV and HCV RNA. HCV RNA was extracted by single step of guanidinium-phenol-chloroform method[2]. Ninety-four serum specimens for ELISA were screened from 460 sera derived from patients with different types of hepatitis, which are anti-HCV positive tested by Abbott second generation HCV ELISA, provided by the Institute of Hepatitis, Youan Hospital.

To facilitate subcloning, EcoR I and Cla I restriction endonuclease sites were added at the 5’-termini of the inner primer. The outer reverse primer was used in both cDNA synthesis and cDNA amplification.

Construction of recombinant plasmids and expression of proteins

Identification of the expressed proteins

Twelve percent SDS-PAGE and Western blotting were used to identify the expressed proteins. The sample was prepared as follows: removing 1 mL of induced culture, centrifuging to collect the pellet, resuspending the pellet and boiling for 5 min to lyse the bacteria with 2 × SDS loading buffer. After the electrophoresis, the polyacrylamide gel was split into two pieces. One piece of gel was stained with Coomassie Brilliant Blue R-250, and scanned to analyze the expression level of the recombinant protein. The other piece was blotted to nitrocellulose membrane. Blotting condition was 0.8 m·cm2·1.5 h. The blotted membrane was incubated with blocking solution containing 10 ml/L fatal bovine serum for one hour, then incubated with anti-HCV positive serum (diluted 1: 100) at 4 °C overnight. The following day, the membrane was incubated with sheep anti-human IgG-HRP (diluted 1:500) at room temperature for 30 min, finally stained with substrate 3, 3’-diaminobenzidine.

The recombinant protein expressed by pMYNS3 was purified by ion-exchange chromatography, and the purified protein was used as antigen to test 94 control positive sera by ELISA.

The PCR products were analyzed on 15 g/L agrose gel electrophrosis, and the expected 634 bp cDNA fragment was clearly seen. Sequencing results revealed that the cDNA fragment is 634 bp, and proved to be HCV NS3 fragment in comparison of the sequence of cDNA fragment and the corresponding region of HCV-BK. Its nucleotide and amino acid homology with genotype II isolate HCV-BK, genotype I isolate HCV1, genotype III isolate HCV-J6 and genotype IV isolate HCV-J8 were 90.8% and 95%, 80% and 94.9%, 73.2% and 88.2%, 73.5% and 86.7%, respectively[8-10]. These results indicated that the isolate in this study belongs to HCV-II. In addition, we also compared its homology with the sequence of corresponding region of HCV isolates derived from the patients who came from Hebei and Taiwan separately, the nucleotide and amino acid sequence homology were 90.4% and 95.4%, 90.8% and 93.8%, respectively[11,12]. SDS-PAGE analysis demonstrated that pRXNS3 plasmid expressed a protein with a molecular weight of about Mr 23800 which amounts to 14% of the total bacterial proteins (Figure 1). pMYNS3 plasmid expressed a molecular weight of about Mr 22000 protein, which covers 11% of the total bacterial proteins (Figure 1). Two forms proteins strongly reacted with anti-HCV anti-bodies in the sera in western blotting test (Figure 2). Using the purified pMYNS3 expressed recombinant protein as an antigen to test 94 control anti-HCV positive sera, 85 (90.4%) of 94 were detected. Among the 94 sera samples, 28 (96.6%) of 29 derived from patients with known transfusion history were detectable. Other sera derived from patients diagnosed clinically as having acute, chronic hepatitis and cirrohosis, the detection rates were 83.3% (10/12) for acute hepatitis, 86.8% (33/38) for chronic hepatitis and 93.3% (14/15) for cirrhosis, respectively. 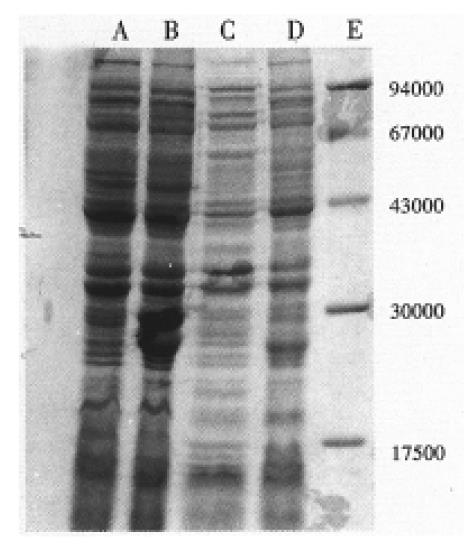 In this report, the NS3 fragment of HCV genome was reversed transcribed and amplified successfully from the serum of a patient who comes from Hebei Province, and the cDNA fragment was sequenced and expressed with high level in E. coli. The results of western blotting and ELISA showed greater antigenicity of the recombinant protein, which demonstrated good prospects of using the protein as an antigen to detect anti-HCV antibodies. The nucleotide and amino acid homology analysis indicated that the HCV isolate in this study should belong to HCV-II. Another HCV isolate derived from the same area is also HCV-II[11], which suggested in some extent that the endemic HCV isolates in this region might be HCV-II. The sequence comparison of NS3 region of HCV between different isolates showed that NS3 region is the relative conservative region in HCV genome, in addition, the amino acid homology is higher than nucleotide homology, so using NS3 protein as antigen to detect anti-HCV antibodies will be characterized by a wide coverage of HCV infection. The prokaryotic expression vector pRX and pMY were used to express HCV NS3 protein. pRX vector with trpE promotor is induced by 3-indolyl acrylic acid and expresses a fusion-protein with 18 amino acid at N-termini of the protein. pMY vector with pRpL promoter is induced by heating at 42 °C and expresses non-fusion protein. We found that the expression level of fusion protein is higher than that of non-fusion protein. The possible explanation is that the proteinase of host bacteria will not recognize the recombinant fusion protein as non-self protein to lyse it. The fusion of bacterial protein to recombinant protein increases the stability of protein and raises the expression level. The comparison between the fusion and non-fusion protein in antigenicity showed no obvious difference. Because pMYNS3 is induced easily by heat, we used the protein expressed by pMYNS3 as coating antigen in ELISA. This study estimated the diagnostic value of NS3 recombinant antigen using 94 control anti-HCV positive sera which are detectable with Abbott second generation ELISA. The results showed that NS3 antigen can detect 85 (90.4%) of 94 of control sera, among these, 28 (96.6%) of 29 sera derived from hepatitis patients with known transfusion history were detected. These results consistent with the results of Abbott’s ELISA test. The successful expression of HCV NS3 protein has provided an ideal basis for developing anti-HCV diagnostic reagents.