AIM: To assess the relationship between gastric acid output (GAO) and both pattern of gastroesophageal reflux (GER) and esophageal lesions, and to evaluate the role of GAO and other potential pathogenetic factors in the development of esophagitis.

RESULTS: The GAO in patients with E + DU was significantly higher than in patients with E (P < 0.05). There was no significant difference between the two groups of patients as to endoscopicl findings and parameters of GER (P > 0.05). A multiple regression analysis with stepwise deletion showed that the presence of hiatal hernia (HH), GER in upright position and age appeared to correlate significantly with the presence of esophagitis.

CONCLUSIONS: No parallel relationship between GAO and severity of GER or esophageal lesions exists in patients with E + DU, and that GAO is not a major pathogenetic factor in GER disease.

It is generally agreed that gastroesophageal reflux (GER) may be multifactorial in its pathogenesis. Over the past decade, many investigators have focused their attention on the role of lower esophageal sphincter (LES), hiatal hernia (HH), esophageal mucosal sensitivity, and esophageal or gastric emptying in the development of GER disease. Some studies have shown that LES, hiatal hernia, esophageal emptying and esophageal mucosal sensitivity are, to a certain extent, involved in the pathogenesis of GER[1-10]. However, although gastric acid is believed to be an important factor in the development of GER disease, it is still unclear whether the severity of GER and esophageal lesions is necessarily related to increased gastric acid output. Moreover, little is known which factors are crucial in the pathogenesis of GER disease. Therefore, the aims of this study are: to assess the relationship between gastric acid output (GAO) and both pattern of GER and severity of esophageal lesions in patients with esophagitis and concomitant duodenal ulcer (E + DU), in comparison with patients with esophagitis only (E); and to evaluate the role of GAO and other potential pathogenetic factors in the development of reflux esophagitis by multiple regression analysis with stepwise deletion.

Two groups of patients were enrolled in this study. Of these patients, 31 (27 men, 4 women; mean age of 44 years) had E + DU and 72 (53 men, 19 women; mean age of 42 years) had esophagitis only. All patients had symptoms of GER disease, i.e., chronic heartburn and regurgitation, and/or up-per abdominal pain, for a median duration of 55.4 months (range from 3 to 120 months). None of the patients had taken H2-receptor blockers or H+/K+-ATPase inhibitors for 2 weeks before 24-h pH-monitoring and gastric acid secretory testing.

All patients underwent upper GI endoscopy, followed by 24 h intraesophageal pH monitoring and acid secretory testing over a 2-week period. Endoscopy was performed by the same gastroenterologist in all patients. The degree of esophagitis was assessed endoscopically by using the criteria of Savary and Miller[11] (grades I to IV). Of these patients, only few presented grades II and III esophagitis, and therefore grades I and II, and III and IV, respectively, were grouped together.

The 24-h intraesophageal pH monitoring was carried out by a routine method used in our laboratory[12,13]. A glass pH-electrode with an incorporated potassium chloride reference (Ingold electrode, No. 440) was introduced via the nasoesophageal route and positioned with the tip 5 cm above the gastroesophageal junction, identified with the pHª²meter. Esophageal pH values were recorded with a solid-state recorder (Autronicord CM 18).

Analysis of pH recording was made on a computer with a dedicated program. The parameters recorded included the frequency and duration of GER in upright position (day-time) and supine position (night-time), and GER frequency exceeding 5 min. GER was defined as abnormal if total reflux duration amounted to 7% during the 24-h monitoring[14].

Basal acid secretory analysis was performed in the absence of any antisecretory medication for 2 weeks before the study, in accordance with Raufman et al[15]. In brief, after a nasogastric tube was introduced into and positioned in the gastric antrum, the gastric contents were emptied by aspiration. Four consecutive 15-min samples of gastric secretion were obtained by continuous aspiration, and the samples were titrated with 0.01 N NaOH to pH7.0. Fasting basal acid output (BAO) was expressed as milliequivalents of acid per hour (mEq/h). After a BAO was obtained, the patients underwent stimulated acid secretory testing. Six μg/kg of pentagastrin were injected intramuscularly. Sum of the four highest consecutive 15-min samples was represented as a maximal acid output (MAO), and that of the two highest consecutive 15-min period within 2 h of receiving the stimulant was represented as a peak acid output (PAO). At the same time, basal gastrin level in the serum was measured. Normal values for BAO, MAO, PAO and basal gastrin in our laboratory are as follows: BAO, 0.37 mEq/h ± 0.27 mEq/h; MAO, 2.05 mEq/h ± 1.07 mEq/h; PAO, 3.36 mEq/h ± 1.19 mEq/h; and basal gastrin, 37.8 ng/L ± 2.84ng/L.

Chisquare test and Student’s t test were used to evaluate the data of GI endoscopy and gastric acid secretion, respectively. Statistical evaluation was made using the Mann-Whitney U test for the parameters of 24 h intraesophageal pH monitoring. Multiple regression analysis with stepwise deletion was used to evaluate role of some potential pathogenetic factors in the development of reflux esophagitis, which were rated in order of importance. The methods and steps are as follows: 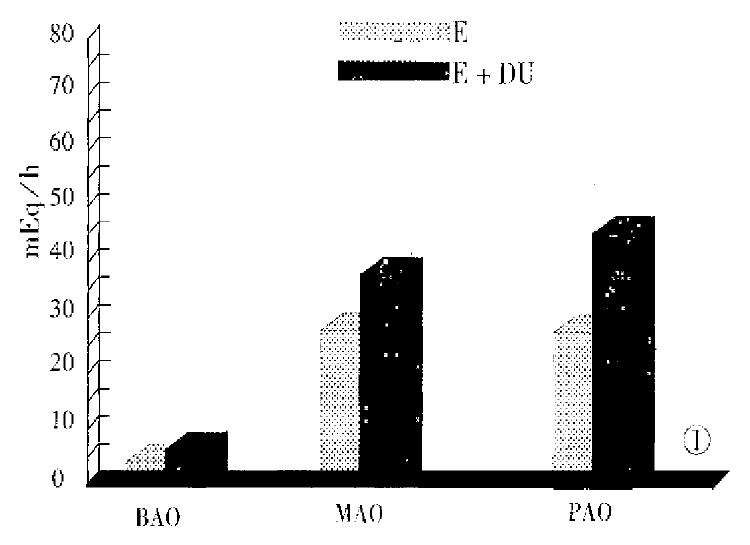 Gastric acid secretion is considered to be an important pathogenetic factor in the development of GER disease. In several studies, a basal acid output higher than normal has been found in patients with reflux esophagitis[17-19]. Collen et al[20] have demonstrated that GER patients who did not respond to standard ulce rhealing doses of H2-blocker showed gastric acid hypersecretion. These results stress the point that gastric acid hypersecretion is a crucial factor for GER disease and for the resistance of GER patients to H2-blockers. However, our results showed that although the gastric acid output in patients with E + DU was significantly higher than in patients with E, there was no significant difference between two groups of patients as to severity of esophageal lesions and patterns of GER. These results suggest that no parallel relationship between GAO and severity of GER or esophageal lesions exists in patients with E + DU.

One approach to investigate the reason why the increased gastric acid output is not accompanied by aggravation of both GER patterns and severity of esophageal lesions is to assess quantitatively the role of the various potential pathogenetic factor involved, which may not only influence esophagitis but also interact. Therefore, multiple regression analysis with stepwise deletion is needed. According to this method, the value of any regression coefficient depends on all the other variables included in the regression. With stepwise deletion, the standard partial regression coefficient can be used as a measure of relative importance, the X being ranked in order of the size of their coefficients.

In our study, ten independent variables in each patient group were evaluated by multiple regression analysis with stepwise deletion. In patients with E + DU, smoking, GER in supine position, BAO, PAO, alcohol consumption, gastrin, and MAO were deleted in a stepwise fashion because they failed to significantly affect esophagitis. Similarly, in patients with esophagitis without DU, seven variables such as smoking, alcohol consumption, gastrin, etc. were deleted by two rounds of regression. These results indicate that GER in upright position and HH are important determinants of esophagitis. Our results also demonstrate, on the contrary, that the gastric acid output is not an important pathogenetic factor responsible for GER disease.

The relationship between the development of esophagitis and the pattern of GER is also a debatable issue. Some authors have found that the development of esophagitis is related to an increased GER in supine position[21-24]. Others have argued that GER in upright position is the most important pathogenetic factor[25-28]. In our study, the result of multiple regression indicates that the GER in supine position appears to be a weak factor affecting esophagitis, whereas GER in upright position plays an important role in the pathogenesis of esophagitis in both groups of patients.

In conclusion, an increased gastric acid output in patients with E + DU does not aggravate both the pattern of GER and esophageal lesions because the gastric acid output fail to appear as a significant pathogenetic factor responsible for GER disease, whereas GER in upright position and presence of HH are significantly related to GER disease in both groups of patients.