Citation of this article
Lu WF. ERCP and CT diagnosis of pancreas divisum and its relation to etiology of chronic pancreatitis. World J Gastroenterol 1998; 4(2): 150-152

AIM: To inquire into the ERCP and CT features of pancreas divisum (PD) and its role in the etiology of chronic pancreatitis.

METHODS: Fourteen patients with PD were analyzed in regard to the findings in ERCP and CT, the activities of serum amylase and the incidence of pancreatitis. Dorsal ductography via minor papilla cannulation was performed in six of them.

RESULTS: The length of dorsal and ventral pancre-atic duct was 16.56 cm ± 2.52 cm and 5.55 cm ± 1.46 cm. Most of the patients had dilatation of dorsal (10/14) and ventral (8/14) duct and the stenosis of dorsal duct terminal (10/14). Delayed clearance of contrast in dorsal duct was found in 8 patients. The size and contour of the pancreas were normal in all the patients at conventional CT. Pan-creatitis was identified in 13 patients.

Pancreas divisum (PD) is a congenital pancreatic ductal anomaly in which the dorsal and ventral pancreatic ducts fail to fuse (complete PD, CPD) or the rudimentary ducts communicate through a fine secondary or tertiary branch (incomplete PD, IPD) during the organogenesis[1-4]. It is rare in Asia[1]. There has been a heated contraversy between those whose epidemicologic studies showed increased prevalence of pancreas divisum among patients with idiopathic pancreatitis and those who found no significant difference in their control population[1]. We analysed the ERCP and CT manifestations of PD in 14 patients and inquired into its possible role in the etiology of chronic pancreatitis.

Between 1983 and 1994, endoscopic retrograde cholangiopancreatography (ERCP) was performed in 3554 patients suspected to have pancreaticobiliary diseases. Among them, the diagnosis of IPD was made in 8 patients when a typical ventral pancreatic duct was first observed, with further filling, a dominant dorsal ductal system was filled via a fine secondary or tertiary branch (Figure 1). On the other hand, dorsal ductography via minor papilla cannulation was attempted in 10 cases when the “main pancreatic duct” was short and tapered, without communicating with pancreatic body and tail (Figure 2). An ideal dorsal ductogram was obtained in 6 patients, and the body and tail segmental duct was filled only via the minor papilla (Figure 3). CPD was confirmed in these patients. 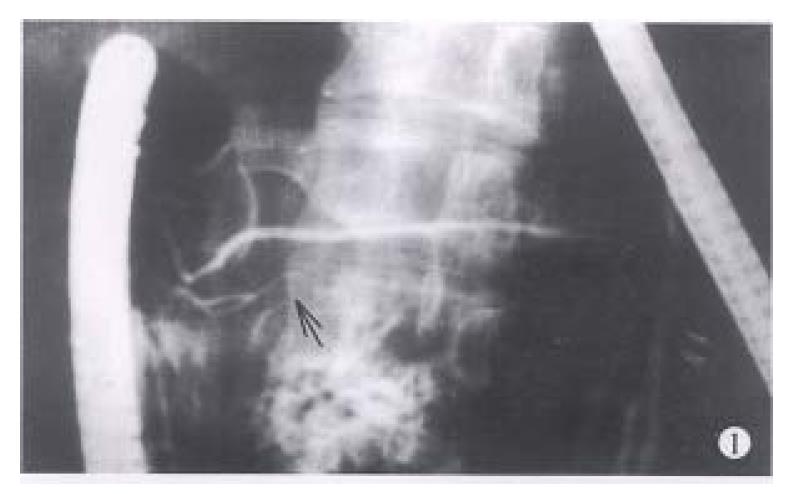 Figure 2 The ventral ductograms of CPD at conventional ERCP. The duct was short, tapered and arborized into a fine side branches without communicating with the body and tail of the pancreas. 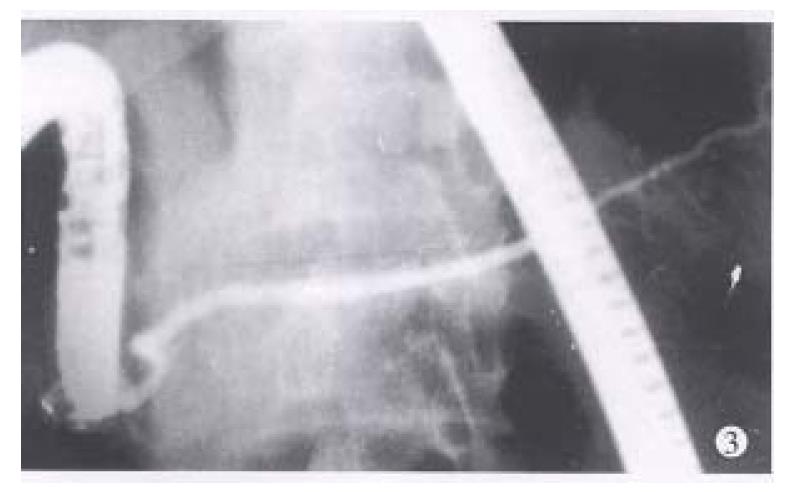 Figure 3 The dorsal ductograms of the above case via the minor papilla cannulation. The duct was dominant and trended from the pancreatic head to tail.

The clearance time of the contrast in the dorsal and ventral duct was recorded in all patients. If the contrast was present at 12 min after the duct had been filled in the prone position, the patient was considered to have a prolonged drainage.

This series consisted of 4 men and 10 women. The mean age was 46.1 years ± 12.2 years (24-69). Six with IPD and five with CPD complained of chronic upper abdominal pain, the others had jaundice, which was caused by biliary stones or biliary duct carcinoma confirmed by CT or pathologic examinations.

CT examination was made in all the patients, with a Shimadzu 3000TX or Somatom DR3 scanner. Collimation of 5 mm and 5 mm or 10 mm scan spacing were used.

Serum amylase activity was assayed using blue starch method in all patients before ERCP was performed.

We studied the ERCP and CT features of pancreas and the activity of serum amylase and analysed the relationship among the sphincter motility, the dilated degree and drainage time of the ducts and the incidence of pancreatitis.

Dorsal duct. The mean length was 16.56 cm ± 2.52 cm. The moderate dilatation and irregular contour were seen in 10 cases (associated with protein emboli in 2) and the others had a normal shape.

Ventral duct. The length was 5.55 cm ± 1.46 cm and dilatation existed in 8 patients (associated with protein emboli in 2 patients). No anomalous changes were found in the remaining 6 cases.

Communicating duct. Its shape was similar to that of pancreatic ductal secondary or tertiary branch and the contour was regular (Figure 1). The united point of the branch with the dorsal duct was situated in the pancreatic neck segment and the angle was 42.7°± 19.2°.

The trend and drainage time. The results are shown in Table 1.

The rigidity and contriction of the ductal sphincter segment were present in nine of ten patients with dorsal ductal dilatation and one of four with normal shape (Figure 4). 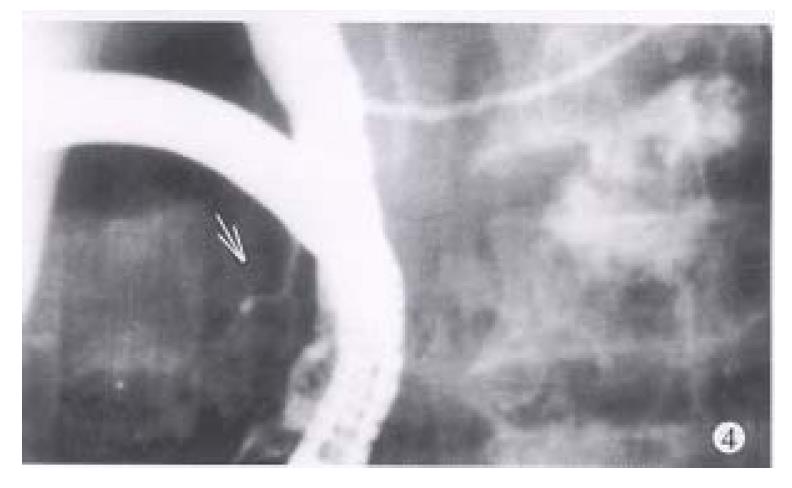 Figure 4 A permanent stenosis of the dorsal ductal terminal was present at the ductograms via the minor papilla cannulation (↑).
CT manifestations

All patients had a normal pancreatic size and contour. Among them, the dorsal ductal dilatation was found in one patient with IPD and two with CPD who also had apparent dilatation at ERCP.

Pancreatitis was found in seven of IPDs and six of CPDs according to the diagnostic standards of Guilin Symposium in 1987. The bile duct stones were found in 1 of IPDs and 3 of CPDs. Two patients had carcinoma of the biliary duct.

Because the conventional ERCP fails to show the whole pancreatic ductal system. Dorsal pancreatic ductography should be applied to those patients who are suspected to have PD. Minor papilla cannulation can be achieved using the catheters with tapered or 25-gauge needle tips. If the minor papilla or its orifice is not distinctly seen, secretin can be administered at a dose of 1 IU/kg body weight to stimulate the pancreatic juice to flow out.

At conventional ERCP, when a characteristic ventral duct was seen, and with further filling, it was communicated with a dominant dorsal duct system through a fine secondary or tertiary branch, IPD could be diagnosed. If no communicating branch was found and the dorsal duct was not filled or clear secretions flowed briskly from the minor papilla instead of the major papilla in response to secretin administered, IPD or CPD could be suspected and dorsal ductography via the minor papilla cannulation should be performed. Under this condition, if the dorsal duct was dominant and trended from pancreatic head to tail, the diagnosis of CPD could be made.

The dorsal and ventral ducts might have some other abnormal changes, including dilatation, distortion, contour irregularities and protein emboli. Anomalous pancreaticobiliary ductal union was found in 2 patients in this study. It implied that the two kinds of pancreatic duct adnormalities were likely to have a common origin in the embryogenesis.

No characteristic manifestations were found in conventional CT. It suggested the limitation of conventional CT to the diagnosis of PD. Lindstrom et al[2] investigated the pancreatic size and contour in 60 patients undergoing the thin-section CT and confirmed that the cranio-caudal length of the pancreatic head in CPD was longer by about 40% than that in normal subjects. He thought that this might indicate the presence of PD, but a local mass must be ruled out. Zeman et al[3] claimed that a characteristic oblique fat cleft in the pancreas head separating the ventral from dorsal pancreas could be seen in 25% of patients at thin section CT.

In the patients with PD, most of the pancreatic juices excreted via the relatively strictured minor papilla. Though the juices could fully drain in the basal stage of secretion, it could be hindered in the peak stage or when the minor papilla was injured by the mechanical, chemical and biological factors. As a result, the attack of pancreatitis was not surprised. In this study, the incidence of pancreatitis in the patients with IPD (87.5%) and CPD (100%) was significantly higher than that in the reference patients with other pancreaticobiliary diseases (15.3%) which was previously reported by us[4]. It indicated that PD was likely to have an etiologic effect on pancreatitis. Besides, a permanent stenosis of the dorsal ductal terminal and the prolongation of the ductal drainage time were present in most of the patients, especially in the patients associated with pancreatic duct dilatation. Therefore there might be a relationship between the attack of pancreatitis and the limitation of the pancreatic juices drainage.

Project supported by the National Natural Science Foundation of China, No. 39370225.