AIM: To elucidate the effect of various solutions for small bowel graft preservation in pigs under hypothermic storage.

CONCLUSIONS: EC and WMO-1 solutions can preserve the swine small bowel up to 18 h, which are superior to LR and HC-A solutions.

Outbred pigs weighing 18.5 kg-22.5 kg were used. The pigs were fasted for 24 h before operation, and general anesthesia was achieved with intravenous sodium pentobarbital.

Heterotopic segmental small bowel autotransplantation was performed as described previously[1]. The small bowel was sectioned before the ileocecal valve and mid-small intestine. The superior mesenteric artery of the graft was perfused with 400 mL-500 mL LR, EC, HC-A or WMO-1 solutions, and stored in the same solution at 4 °C for 10, 18 and 24 h, respectively. The perfusion pressure was 10.8 kPa-11.8 kPa, and perfusion time was 20 min. The lumen was perfused with metronidz-zole solution at 4¡æ after perservation, and the small bowel graft was autotransplanted. Both ends of the grafts were brought out as stomas (Thiry-Vella loops). Intestinal continuity was restored with two end-to-end anastomoses. The experimental groups and preservation time are shown in Table 1.

Biopsy specimens obtained from the graft stomas, fixed in 10% neutral formation and embedded in paraffin, and sections were cut at 4 μm thickness, and stained with haemotoxylin and eosin. All specimens were observed under light microscopy.

Absorptive function of the graft was estimated with D-xylose absorption test. Five g D-xylose (dissolved in 100 mL normal salt solution) was irrigated into the graft from the proximal stoma, and serum D-xylose level was determined by Eberts’ method[4].

All results were expressed as x-± s, statistical variances were made by Student’s t test or χ2 analysis, differences were considered significant if P < 0.05.

Six animals died because of failure in vascular anastomosis. Five animals were observed in each group. The survival rate on the 21st POD was similar in the graft preserved with each of the four solutions either for 10 or 18 h. When the graft was preserved for 24 h, the 21st POD survival rate was lower in LR group than in EC and WMO-1 groups (P < 0.05, Table 2).

After 10 and 18 h of cold storage, serum level of D-xylose was similar in all groups while after 24 h it was higher in EC and WMO-1 groups than in LR and HC-A groups (Figure 3). 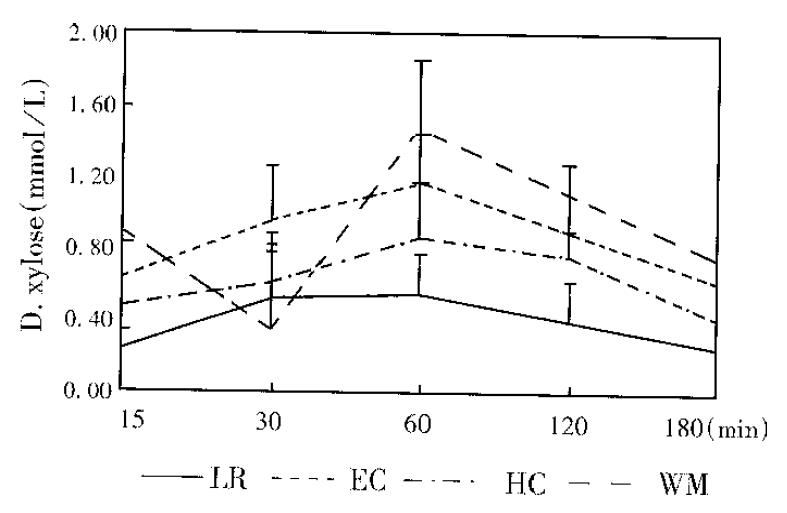 LR solution, an extracellular fluid, is widely used in experimental small bowel preservation. Luther et al[6] and Zhang et al[7] reported that LR solution is superior to UW and EC solutions for small bowel storage in the rat model. In our studies, no animal receiving the graft preserved for 24 h survived more than 21 d. The recipient survival rate in EC and WMO-1 groups was 60%, respectively. Mucosal contents of ATP and TAN, and Na+-K+ ATPase activity in EC and WMO-1 groups were higher than in LR and HC-A groups after 24 h of cold storage. Our results indicated that EC and WMO-1 solutions are superior to LR solution for small bowel preservation in the pig model.

HC-A solution, a modified Ross solution, contains adenine, precursor for ATP production, and its osmolarity was reduced from 400 to 380 mOsm/L. The solution has provided 48 h or longer preservation for the cadaveric kidneys. In our study, mucosal contents of ATP and TAN and Na+-K+ ATPase activity in HC-A preserved small bowel was not higher than in EC and WMO-1 preserved one, so adenine added into the HC-A solution could neither improve the ATP production nor inhibit the tissue ATP degradation.

WMO-1 solution, containing ATP and Ca2+ could provide 48 h preservation for the liver in the rat model. It is believed that ATP in WMO-1 solution could increase the energy state of tissue and prevent ATP degradation and the calcium could stabilize the membranes. Our study indicated that mucosal contents of ATP and TAN were not higher in WMO-1 preserved small bowel than in EC- preserved one. Mucosal Na+-K+ ATPase activity was similar in the two groups, therefore, ATP added into WMO-1 solution could not prevent ATP degradation in tissues. It was not introduced in latest-developed organ preservation solution, such as UW. In the healthy cells, cytosolic calcium is at very low level (10-7 mmol/L), and hypothermic preservation may disrupt the cell membrane, resulting in influx of calcium into the cell. Elevated intracellular calcium was also shown to potentiate cell damage[8], therefore the effects of ATP and Ca2+ in the WMO-1 solution should be studied.

As shown previously, the EC solution is a standard organ preservation solution and has been widely used in liver, kidney, pancreas and small bowel transplantations[5]. In this study, EC solution is superior to HC-A and LR solutions, and mucosal contents of ATP and TAN and Na+-K+ ATPase activity were higher in EC group than in LR and HC-A groups and were similar to that of WMO-1 group.

Recently, a direct correlation between ATP content during cold preservation and outcome in animal and clinical organ transplantation has been reported[9]. Na+-K+ ATPase is an important membrane-bound enzyme that acts by active extrusion of Na+ from the intracellular compartment to counter-balance the osmotic effect of impermeable intracellular macromolecules. We investigated the effect of four solutions in recipient survival rate, mucosal energy substances, Na+-K+ ATPase activity and absorption of the graft. The results showed that Na+-K+ ATPase activity maintained unchanged during cold storage and reduced significantly after reperfusion but the contents of ATP and TAN decreased during cold storage. There was a direct correlationship between contents of ATP and TAN after cold storage and Na+-K+ ATPase activity after reperfusion and recipient outcome after transplantation. EC and WMO-1 solutions were superior to LR and HC-A solutions for small bowel graft.

Project supported by the National Natural Science Foundation of China, No. 39070828.