AIM: To evaluate hepatic energy charge levels of the patients with hepatoma after hepatic artery embolization and its relation to postoperative complications.

RESULTS: AKBR in high radiation dose or jaundice group drastically decreased at 1-3 d and recovered slowly. Patients were classified into three groups according to the value of AKBR: group A (35 cases), AKBR remained higher than 0.7; group B (31 cases), AKBR had transiently dropped to 0.4-0.7 and then increased to preoperative value; and group C (3 cases), AKBR decreased steadily to below 0.4. The occurrence rate of various complications were 5.7%, 32.3% and 100% in the three groups, respectively (P < 0.005).

CONCLUSION: The AKBR which reflects hepatic mitochondria redox state is morereliable as a direct indicator to assess hepatic tolerance for embolization than routine liver function test.

Hepatic artery embolization has been the first choice for advanced hepatomas in recent years, the therapeutic effect depends upon not only thoroughness of chemoembolization or radioembolization, but also closely correlated with liver function reserve[1]. It has been shown that conventional liver function tests could not give a direct and accurate evaluation of postoperative metabolic abnormality, while the arterial blood ketone body ratio (AKBR) which reflects hepatic mitochondria redox state could serve as a relatively more reliable parameter to assess the extent of hepatic injury and vitality[2]. This study investigates the effects of various embolization methods on hepatic energy charge level and its relation to postoperative complication.

Sixty-three patients with unresectable primary hepatocellular carcinoma, 3 metastatic liver carcinoma and 3 haemangioma confirmed by B-type ultrasonography, hepatic angiography, computed tomography and operation were included in this study. There were 66 males and 3 females, aged from 21 to 64 years with a mean age of 44.3 years. Liver cirrhosis was found in 62 patients (89%). Preoperative child classification of liver function was A stage, 53 cases; B stage, 15 cases; and C stage, 1 case and increased total bilirubin was detected in 20 patients.

For the assay of ketone bodies, 4mL arterial blood samples were obtained with a heparinised syringe via the femoral artery 1 d preopratively, and 1, 3, 5 and 7 d postoperatively. When blood samples were taken, all patients were receiving intravenous infusion with 10% glucoses to maintain their blood glucose levels at 6.7 mmol/L-11.2 mmol/L. The blood samples were immediately mixed with the same volume of ice-cold 10% w/v perchloric acid. The suspension was centrifuged at 10000 × g for 15 min at 0 °C. The supernatant was adjusted to a pH of 7.0 with cold 65% w/v potassium carbonate and recentrifuged at 10000 × g for 5 min at 0 °C. The final supernatant was used to measure the AKBR (AKBR = acetoacetate/β-hydroxybutyrate), spectrophotometrically by the standard methods of Mellanby and Williamson[3].

The AKBR of intergroups was compared by analysis of variance and the positive rates by Chi-square test. P value < 0.05 was considered to be statistically significant. 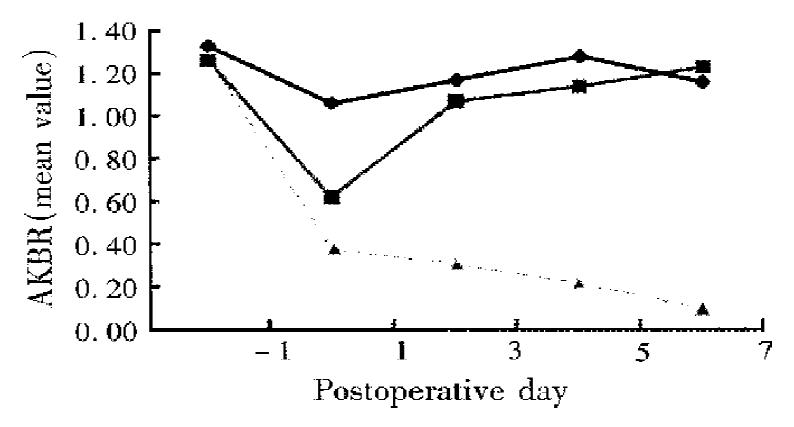 The major postoperative complications in each group are summarized in Table 1, the occurrence rate was 5.7% (2/35), 32.3% (10/31) and 100% (3/3) respectively (P£¼0.005), with no significant statistical difference among the groups (P < 0.005). However, no difference was found in postoperative changes in serum enzyme activities, albumin and total bilirubin concentrations among the three groups.

As shown in Table 2, the radioembolization at large doses had marked effect on the AKBR levels, which declined rapidly after operation and recovered slowly along with repeated occurrence of complications. The preoperative AKBR in the group with elevated bilirubin was lower than that of normal bilirubin (P < 0.02), and most of the cases fell to below 0.7 within 1-3 postoperative days and were accompanied by a higher morbidity of complications. Liver dysfunction and hemorrhage occurred in six patients with low preoperative AK-BR level (0.69-0.85), and two of them eventually died of multiple organ failure, whereas only two of other fourteen patients with AKBR of 0.97-1.43 preoperatively suffered from cholecystitis and wound dehiscence.

AKBR can reflect the oxidoreduction state of free nicotinamide adenine dinucleo tides (NADH) in liver mitochondria, i.e., AKBR = K × free NAD+/free NADH, which is closely linked to energy charge level (ATP + 1/2ADP/ATP + ADP + AMP)[4]. The AKBR, when it is greater than 1, 1-0.7, 0.7-0.4, 0.4-0.25 and less than 0.25, may indicate respectively normal mitochondria function (takes mainly sufficient glucose oxidation with an increased NAD+), slight mitochondria dysfunction (takes preferentially oxidized fatty acids as an efficient energy source rather than glucose such as group A), mitochondria membrane impairment (leads to inhibited pyruvate oxidation and enhanced β-oxidation of long-chain fatty acid, various complications may occur under the condition of constant ketogenesis, such as group B), serious mitochondria injury and death (results in an irreversible damage of the energy-generating system such as group C).

It has been found that acute ischemia, chemical toxic agent and nuclide internal radiation precipitate direct injury to mitochondria. Our results indicate that the reduced AKBR was related to radiation doses, and the radiomicrosphere affected obviously the hepatic energy charge level among the three therapeutic patterns (embolization, chemoembolization, radioembolization) and the two targets (selective or inselective). Hepatocellular hypoxia could inhibit the electron transport system in mitochondria chain and produced excessive accumulation of NADH. The range of AKBR decline has proved to be paralleled to the blocked extent and time of hepatic blood flow[5], and the hepatic cell can be compromised by β-ray radiation and terminal embolic material. Therefore, internal radiation therapy at large doses might not be an advisable procedure for patients with liver carcinomas.

Preoperative AKBR might serve as an approximate index for evaluation of energy reserve status. When patients were associated with severe cirrhosis and obstructive jaundice, chronic mitochondria dysfunction potentially preexisted because of their deprived portal flow, reduced endogenous insulin level acting on oxidative phosphorylation process, altered ATP transport rate and prohibited directly by bilirubin[2]. Therefore, the higher AKBR may indicate some acute compensatory capacity for injury, and their tolerance to embolization can be quantitatively assessed by combination of redox tolerance test (RTT)[6], while the lower AKBR demonstrates that preoperative compensatory activity for synthesizing liver ATP is up to an extreme limit, e.g. various complications were observed in six patients with hyperbilirubinemia and preoperative AKBR of 0.69-0.85. Hence, the indication for TAE must be care-fully considered in patients with those risk factors.

Funded by the China Medical Board, NY, USA