METHODS: Internal SV40 promoter was deleted by SalI from retroviral vector pMNSM to construct pMNM. HSV-tk gene driven by pgk promoter was released by BamH I from an eukaryotic expression vector pBPGK-tk, and inserted into polylinker site of pMNM to construct pMNP-tk retroviral vector. Human α-fetoprotein gene enhancer core sequence was released by EcoR I from pGEM. 7Z-AFPe plasmid was inserted into the immediate upstream of pgk promoter of pMNP-tk vector. Construction of hepatoma specific retroviral vector pMNAP-tk was completed.

RESULTS: The structure of pMNP-tk and pMNAP-tk vector was confirmed by restriction analysis.

Gene therapy for tumor is a modern biotherapy which is rapidly developing at present. The key point of gene therapy is to introduce the gene of interest into the tumor cells, and make the genes specifically express in tumor cells. Tumor targeted expression of genes was fully emphasized, especially to employ the cell type specific expression regulatory elements to direct the expression of the genes in certain target cells. American Recombinant DNA Advisory Committee (RAC) of NIH had passed a protocol which was suggested by K.W. Culver. That was to transfer HSV/tk gene into the murine packaging cells and introduce these cells into the human brain tumor bed, and followed by ganciclovir (GCV) treatment. GCV, by convertion into GCV triphosphate, can inhibit DNA polymerase, resulting in inability of the cells to proliferate. Now it has been brought into clinical experiments. Gao et al in this study improved this method, by constructing retroviral vector PMNAP-tk to the upstream of HSV-tk gene human pgk promoter using human AFP enhancer core sequence. This vector has the function of hepatoma specific prodrug transformation. This study on hepatoma gene therapy should be of great significance. Professor Zu-Yu LUO, Institute of Life Science, Fudan University, Shanghai, China.

Herpes simplex virus thymidine kinase (HSV-tk) can catalyze deoxythymide to both deoxythymidylic acid and some nucleoside analogues (NAS) phosphorylation. These phosphorylated NAS is more toxic to mammalian cells, blocking cell DNA duplication[1]. Recently, numerous experiments in vivo or in vitro showed that HSV-tk gene transferred into tumor cells by some shuttle vectors produces efficiently anti-tumor effect using NAS as prodrug[2,3]. Furthermore, the clinical trials have been approved in some countries for the treatment of brain tumor with HSV-tk gene/prodrug system[4].

Morbidity of hepatic cancer is very high in China. No effective treatment is available for the tumors in late stage. In order to establish an effective gene therapy against hepatic cancer and study the effect of household gene enchancer in the retroviral shuttle vector to regulate the gene of interest for hepatoma specific expression, we have constructed the general and the hepatoma specific HSV-tk retroviral expression vector.

All restriction enzyme, T4 DNA ligase and Klenow fragment were purchased from Promega Corporation. E. coli host strain HB101 and E. coli JM109 were obtained from our department. The general and the hepatoma specific HSV-tk retroviral expression vectors were constructed[5]. After plasmid pMNSM and pBPGK-tk were introduced into E.coli HB101, respectively, ten ampicillin resistant colonies were selected and the plasmid DNAs were extracted. The correct plasmids identified by the restriction analysis were amplified through E. coli and purified by PEG 8000 (Sigma Corporation) method, respectively. After plasmid pMNSM was digested by endonuclease Sal I, the small SV40 promoter fragments were discarded and the big fragments were recovered from the low melting point agarose gel. The big fragments were self-circularized with T4 DNA ligase, and named pMNM. Plasmid pMNM DNAs amplified and purified were linearized by BamH I digestion. A 2.8 kb BamHI fragment of plasmid pBPGK-tk containing the pgk gene promoter and HSV-tk gene was isolated and inserted at the BamH I site of pMNM. The ligated molecules were used to transform E.coli HB101. Ampicillin resistant colonies were selected and the plasmid DNA was extracted. Through the combinative digestion of the Hind III site at the inserted fragment and the EcoR I site at the plasmid pMNM, the colon that appeared as a 28 kb and 61 kb fragment was correct, and named pMNP-tk (Figure 1). 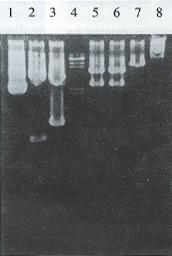 Plasmid pGEM 7Z-AFPe DNA was transformed into E.coli JM109. By α complementation method, the white color colones were selected and the correct plasmids were identified by the restriction analysis (Figure 1). The credible plasmid pGEM-7Z-AFPe was amplified. The AFP gene enhancer core sequence 727 bp EcoR I fragments, after being filled in by Klenow fragment and dNTP, were harvested from the low melting point agarose gel, and inserted into the Sal I linearized plasmid pMNP-tk. The recombinant DNA was introduced into the E.coli HB101 and combinative digestion of Hind III and BamH I were used to identify the correct colonies. One colony exhibiting 406 bp, 2.8 kb and 6.4 kb frgments was in right junction, named pMNPA-tk α. Another colony exhibiting 321 bp, 2.8 kb and 6.5 kb fragments was reverse, named pMNPA-tk α (Figure 2). 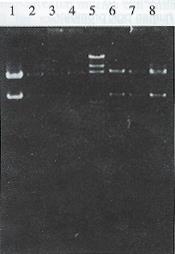 In order to make the chimeric HSV-tk gene express in eukaryotic cells, we isolated the DNA fragments containing both the pgk gene promoter and HSV-tk gene from the eukaryotic expression vector pBGK-tk and removed the SV40 promoter from the retroviral vector pMNSM. The recombinant plasmid gene structure is shown in Figure 3. 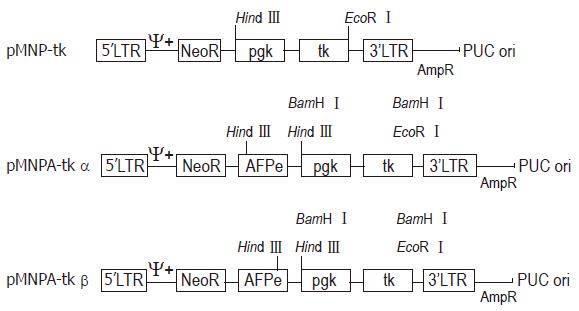 On the basis of structure of plasmid pMNP-tk, the AFP gene core sequence was inserted at the Sal I of pMNP-tk so that it can regulate the pgk gene promotor function and direct the HSV-tk gene hepatoma specific expression.

The gene therapy for cancer is developing rapidly. Its mechanisms may be as follows: Increasing the anti-tumor immunity, and introducing tumor inhibitor gene, the antisense of oncogenes, the prodrug coverting gene, MDR-1 gene for the protection of chemotherapy, and the anti-metastasis gene[6]. The prodrug genes, such as HSV-tk, VZV-tk and cytosine deaminase (CD), and encode proteins, can convert the nontoxic prodrug into intracellular toxins as non-mammalian metabolic enzymes[7]. Such enzymes can block the cell DNA duplication as a competitive inhibitor of DNA polymerase.

The gene expression in tumor cells is the first step for gene therapy. Eukaryotic expression plasmid vector and viral vector are commonly used for the expression of genes in tumor cells. In viral vectors, the recombined retroviral vector, which is constructed with Mo Mulv as the main skeleton, is more often used[8]. It is feasible that a gene will be expressed if it is regulated by two promoters. In our construction, we deleted the SV40 promoter of the retroviral vector, and made the tk gene under the control of the pgk gene promoter, which is a kind of eukaryotic promoters. These may decrease the presence of wild retrovirus[9] caused by recombined homologous product.

In in vivo gene therapy, it is important to make the gene specifically express in tumor tissues. Two approaches may be used. One is to modify the shuttle vector by gene engineering, the other is to direct the gene expression in target cells by means of the tissue specific transcriptional regulatory sequence (TRS). Scharfmann et al[9] considered that the transcriptional regulatory sequence of “household gene” will cause the chimeric gene to express at a high level in a specific tissue. Hubber et al[7] reported that VZV-tk gene regulated by AFP TRS and mediated by retroviral vector, made the AFP-positive hepatoma cells, HepG2, H3B and HuH7 sensitive to the prodrug 6 methoxypurine arabinonucleoside (araM). The aim of our work was to regulate the pgk + tk gene by AFP enhancer core sequence 727 bp. The usage of the TRS for regulation of HSV tk gene can not only increase its transcription but also make its expression tissue specific. In our future experiments, we will assess their anti-tumor effects in nude mice.

We thank SUN Ru-Mei for his technical assistance.

Project supported by the National Natural Science Foundation of China (No.39500147)