METHODS: A modified chloramine-T method to produce nuclide 125I labeled horse anti-human AFP polyclonal antibodies was used to treat 22 cases of HCC. Drugs were administered by intravenous drip. The median dose of 125I in the whole group was 289.3 (100.3-708.9) MBq. In this series of 22 cases, 19 were evaluated. HCC cases of the same period treated by 131I anti AFP (A group), anti-cancer drugs and anti AFP conjugates (B group) and chemotherapy alone (C group) were used as controls.

CONCLUSION: The therapeutic effect in the treatment group was significantly better than that of the control groups. This may be due to the effect of the continuous radiation of the long half life 125I within the tumor cells.

There have been many experimental and clinical reports about targeted treatment of hepatocellular carcinoma (HCC)[1-5]. In 1980 the authors in 1980 started to use 131I anti alpha fetoprotein (AFP) for the treatment of HCC, reported preliminary results in 1983[5] and published the results of 72 cases in 1994, which showed rather good curative effects[6]. However, 131I has several short comings, such as requiring highly protective measures, a short half-life, apparent time limits, etc. Hence, the authors selected nuclide 125I as the warhead. Although its energy is low, it has a long half-life, is easy to operate and only requires comparatively simple protective measures. In this paper, the authors reported the use of 125I anti AFP antibodies to treat 22 cases of unresectable HCC (treatment group) from March 1991 to November 1993. HCC cases of the same period treated by intravenous 131I anti AFP targeted therapy (A group), intravenous anticancer drugs, anti AFP conjugates (B group) and chemotherapy alone (C group) were used for control studies.

MATERIALS AND METHODS
Preparation of 125I anti AFP antibodies

Horse anti-human AFP polyclonal antibody serum was extracted by the ammonium sulfate precipitating method and purified by affinity chromatography. The purified antibodies were labeled with 125I (supplied by the China Atomic Energy Research Institute) by the chloramine-T method. The product 125I anti AFP was isolated by a Sephadex G column and filtered to remove bacteria. After cultivation and limulus testing to ascertain the lack of bacteria and pyrogens, the product was prepared for clinical use. Altogether 22 batches were prepared, with a 125I recovery rate of 60%-80%, labeled rate of 65%-83%, and comparative radioactivity of 56.74 GBq/g IgG.

All cases were diagnosed as primary HCC on the basis of CT or hepatic arteriography, B ultrasonic examination or AFP test. Except for 2 cases which were AFP negative (confirmed by pathological examination), all cases were AFP positive (> 400 μg/L). The heart, liver and kidney functions of these 22 patients on admission were basically normal. Their pretreatment clinical characteristics are illustrated in Table 1.

Treatment group: 3-6 d before and 7 d after treatment the patients were given compound iodine solution to block the thyroid gland. Skin tests were performed prior to 125I anti AFP intravenous drip and prednisone 30 mg was taken fractionally to prevent allergic reactions. The labeled drug was given once per month. The 125I median dose of the whole group was 289.2 (100.3-708.9) MBq. The IgG amount of anti AFP antibodies was 5.2 (1.8-12.8) mg. Ten of the treatment group were treated only by 125I anti AFP, while the remaining 12, after receiving 1.2 targeted treatments, were given intravenous chemotherapy, transarterial infusion (TAI) or transarterial chemoembolization (TAE).

Therapeutic observations and criteria of curative and toxic side effects

The blood pictures were examined every week. Each patient had heart, liver and kidney function tests and AFP tested pretreatment. B ultrasound or CT examinations were carried out monthly or bimonthly. Determination of the blood thyroid function T3 and T4 before treatment and during the monitoring of the blood, 125I turned to zero. Detection of the biological bodily distribution of 125I by FT-3120 isotope activity was performed in some cases to determine the blood 125I concentration (% dose/mL) at different times after treatment and the urinary excretion rate (the percentage of 24 h urine 125I administered dose amount). The organ surface cpm·min-1 of the liver and some other organs were also determined. The evaluation of the short term therapeutic effects was carried out according to CR, PR, MR, SD and PD standards. The toxic side effects and reactions were evaluated according to the WHO toxic reaction graduated standard.

All patients in the treatment group were followed up for 10.33 mo. In 2 cases, the duration of treatment was less than one year. Nineteen cases in the treatment group were evaluated and 3 cases in which the tumor mass was either too big, numerous or complicated with tumor thrombus of the portal vein were not evaluated. Of these 3 cases, 2 were discharged from hospital on the 14th and 19th day after one targeted treatment because of the appearance of jaundice and worsening illness. One patient who left the hospital due to liver rupture was not reexamined after treatment. In the control groups, A, B and C, all the patients died except one in control group A. The effective rate and one year survival rate in the treatment group were higher than those in the control groups (Table 3). In the treatment group, the tumor shrinkage rate was 63.2% (12/19), median shrinkage rate was 45.0% (18%-100%) and 6 cases had a shrinkage rate of more than 50%. Of the 7 cases of the treatment group who survived, 5 cases had already survived for 14, 14, 22, 30 and 33 mo. One patient, a 29 year old male, received 3 targeted therapies with the following results: The tumor shrank in size from 8.9 cm × 8.1 cm to 4.9 cm × 3.8 cm; AFP of more than 1600 μg/L became negative; the tumor gouged out surgically was 4.5 cm × 4.5 cm × 4 cm in size and found to have nodular liver cirrhotic changes; cross section of the tumor showed a necrotic substance; and pathological examination showed that the tumor was a highly differentiated hepatocellular carcinoma. Electron microscopy (Figure 1 , Figure 2, Figure 3 and Figure 4) revealed the vacuolation of cellular organelles, nuclear dissolution or pyknosis of the nuclei, cellular degeneration, necrosis and the disappearance of normal structures. 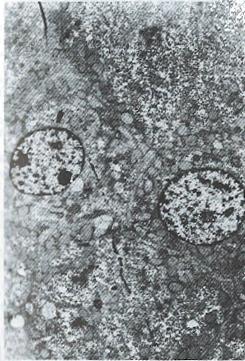 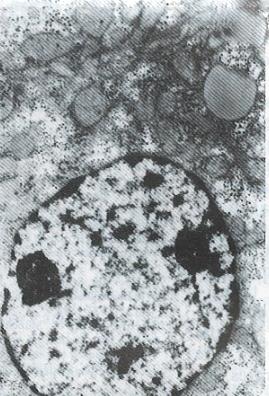 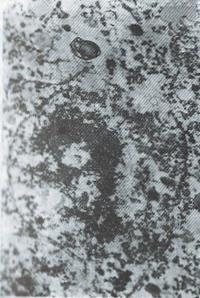 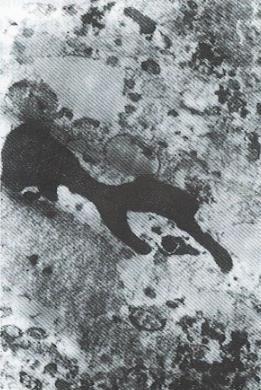 There were no allergic reactions in the treatment group. Two cases (receiving the same batch of labeled material) had fever (38.8 °C and 39.5 °C) one hour after the intravenous drip. The fever was related to the pyrogens. There were 5 cases whose SGPT was increased slightly. Leukopenia grade I, II and III occurred in 4, 3, 2 cases, respectively, which was significantly lower than that in the chemotherapy only group and in chemotherapy group it occurred in 19, 4 and 3 cases, respectively. In the treatment group, T3 and T4 were determined in 27 cases and there was a decrease in 8 and 6 cases, respectively. One case was medicated with thyroid tablets because he had clinical manifestations of mild “hypothyroideism”. The patient had returned to normal when he was reexamined 2 mo after treatment.

People use lipiodol as a carrier for antitumor drugs, nuclide 131I or 125I as warheads in targeted therapy for HCC. This therapeutic method was indicated for the treatment of unresectable HCC. Bretagne[7], Baoul et al[8], Lu et al[4] and Wang et al[2] used 131I (or 125I) labeled lipiodol infusion via the hepatic artery or combined with antitumor drugs for the treatment of HCC. The AFP descending rate was 37%-86.7%, the objective effective rate was 40%-75%, and the post treatment 1 year survival rate was 31%. However, it was necessary to deliver the drugs via the hepatic artery. Regarding using antibodies as a carrier, many scientists have reported the usage of anti-ferritin antibody. Order[9] used 131I anti-ferritin antibodies in treating 105 cases of HCC, applying targeted therapy after radiotherapy combined with chemotherapy. The effective rate was 48% (CR 7%, PR 41%). Tang[1], using 131I anti-human HCC isoferritin antibodies as the main tool, integrated this tool with radiotherapy, chemotherapy and immunotherapy in the treatment of 47 cases of HCC. The results were that in 13 cases the tumors shrank and were resected and 7 cases survived for more than 3 years. We used 131I anti AFP ≥ 2 times for 47 cases of HCC, achieving a one year survival rate of 45.7%. However, in that group of patients, 14 cases received drugs via the hepatic artery. The effective rate was higher in treatment via the hepatic artery than via the intravenous route (64.3% vs 15.2%). Also, the 1 year survival rate was higher in the former than the latter (64.3% vs 37.5%). In our group of 22 cases, most were in the advanced stage (Table 1) and the drugs were all administered by the intravenous route. In cases treated ≥ 2 times, the 1 year survival rate (57.1%) was significantly higher than those of the control groups (P < 0.05). Besides, 7 were still alive. Electron microscopy of the surgical specimen obtained from one post treated patient showed cellular degeneration and necrosis, indicating that such morphological changes were related to the selective action of the targeted drugs. Koji et al[10] reported that on the 7th day after the infusion of 125I labeled anti AFP and F (ab’) into the rat liver cancer model, within the tumor, 30%-60% of the radioactive materials localized on the cell membrane and nuclear membrane of the cancer cells. Such localization within the tumor was 4 times higher than that in the control group IgG. He further observed that the AFP of advanced stage HCC patients dropped to normal level and was maintained at that level for more than 4 mo after receiving 125I anti AFP treatment. He believed that this might be due to the attack and inhibition of the cancer cells by the antibodies. Judging from the observation of the blood 125I levels and the urinary excretion rates determined at different times in some of our treated patients, and as time passes, such blood 125I levels and urinary excretion rates declined but rather slowly, showing that the radiation action of 125I within the cancer cells might persist for quite a long time, thereby producing comparatively good therapeutic results. This paper and the Koji experimental investigation suggest that 125I anti AFP possesses a certain degree of specificity in the treatment of HCC. Of course, this awaits further clinical verification. Although 131I possesses certain merits, such as a strong tumoricidal effect, it has short comings such as a short half-life, time limits, needing rather expensive preventive measures and patients having to be isolated. On the other hand, 125I has several advantages, e.g. long half-life, low energy, short X-ray penetration distance (about the diameter of a cell), little adverse effect on normal cells, easy to operate, simple protective measures and having significant practical value. It can be prepared as HCC targeted treatment medical kits to be used extensively in the clinical field.