AIM: To explore whether the presence of a sliding hiatus hernia influences gastroesophageal reflux.

The relationship between hiatus hernia (HH) and gastroesophageal reflux (GER) disease remains controversial[1-4]. One opinion was that the demonstration of HH would frequently imply the presence of reflux esophagitis. Some investigators, for example, have claimed that HH can be found in almost all cases of esophagitis[5-6]. As a result, some authors believed that it was necessary to excise HH to cure GER disease. Another opinion was that the existence of HH did not affect esophageal sphincter competence[7-10]. The third opinion was that HH might play only a partial role in the development of esophagitis, that is, the absence of HH could exclude more severe forms of reflux esophagitis[11-14]. This study was, therefore, designed to evaluate the influence of the existence of HH on GER.

One hundred and ninety-seven consecutive outpatients (female, 75; male, 122) who had experienced the symptoms of heartburn, regurgitation and chest pain for at least 6 mon were included in this study. None had a past history of surgery or had taken H2 receptor blockers or proton pump inhibitors during the 4 wk prior to endoscopy and 24 h esophageal pH monitoring.

Endoscopy was performed a week before 24 h esophageal pH monitoring. Esophagitis was graded from I to IV according to the Savary-Miller classification[15]. Only a few patients presented with grades II and III and therefore grades I and II, III and IV were grouped together, respectively. Twenty-four hour intraesophageal pH monitoring was carried out in accordance with a method described elsewhere[16,17]. Patients were advised to take a standard meal with approximately 2200 kilocalories during 24 h intraesophageal pH monitoring. A glass pH electrode with an incorporated potassium chloride reference electrode (Ingold Electrode, No.440) was passed by the nasoesophageal route and positioned with the tip 5 cm above the gastroesophageal junction identified by a pH meter. The results from the pH probe were recorded on a solid state recorder (Autronicord CM18), which was carried by the patients on a belt. A computer based analysis was used for the interpretation of the 24 h pH monitoring data. The parameters recorded included the number and percentage time of GER episodes and the number of GER episodes lasting over 5 min. A pathological reflux (PR) was diagnosed if 1) the pH value in the regurgitated contents was less than 4.0 and 2) the complete reflux duration was more than 7% in 24 h[16,17]; physiological reflux (PhR) was defined if a reflux event did not fulfill the above criteria; reflux esophagitis (RE) means a pathological reflux event associated with esophageal inflammatory lesions; and physiological reflux esophagitis concomitant with esophagitis (PhRE) means an esophageal inflammatory lesion without pathological GER.

The Wilcoxon test was used for the analysis of GER parameters in the patients with and without HH. Student’s t test was applied to analyze the age and the duration of GER symptoms. The remaining data were analyzed using the Chi square test. 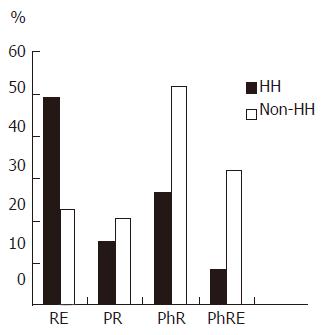