BCLC-B HCC patients undergoing hepatectomy with N + S ≤ 10 had mild recurrence patterns and excellent OS similar to those in BCLC-A MNHCC patients, and LR should be considered in these patients.

Core Tip: Subgroups of Barcelona Clinic Liver Cancer (BCLC) intermediate-stage hepatocellular carcinoma (HCC) patients who would truly benefit from liver resection (LR) remain undefined. We demonstrated that the sum of tumor size and number (N + S) can predict not only prognosis in BCLC-B patients undergoing LR, but also the recurrence patterns and recurrence-to-death survival (RTDS) in these patients. In addition, we indicated that BCLC-B patients undergoing hepatectomy with N + S ≤ 10 had mild recurrence patterns, good RTDS and excellent overall survival similar to those in BCLC-A multinodular HCC patients. The results of this study are helpful in selecting BCLC-B patients more suitable for LR.

As the sixth most common cancer globally, primary liver cancer accounted for 906,000 newly confirmed cancer cases and 830,000 cancer-related deaths worldwide in 2020, of which 75%-85% were hepatocellular carcinoma (HCC)[1].

Barcelona Clinic Liver Cancer (BCLC) staging system, which was proposed in 1999, has been widely used to guide treatment decisions in patients with HCC[2,3]. The 2022 version of the BCLC strategy recommends liver transplantation (LT), transarterial chemoembolization (TACE), and systemic therapy, respectively, for BCLC intermediate-stage HCC patients based on their expected survival time[4].

In addition, emerging studies have suggested that liver resection (LR) may also be a good treatment option for BCLC-B HCC patients[5,6]. Nevertheless, the subgroups of BCLC-B HCC patients who would truly benefit from LR have yet to be defined. Several previous studies found that some BCLC-B HCC patients undergoing LR had favorable long-term overall survival (OS) rates (5-year OS rates: 50%-75%); however, these selected patients still had high postoperative recurrence rates (2-year recurrence rate: ≥ 50%), which means that many of these patients had good recurrence-to-death survival (RTDS)[7,8]. Both recurrence patterns and treatments after recurrence can affect the RTDS of HCC patients who develop recurrence after LR[9-11]. However, previous studies did not analyze the main reasons why these selected patients had good RTDS, which may affect the judgment of the role of LR in these patients[7,8].

In this study, we retrospectively included patients undergoing curative LR for BCLC stage A or B multinodular HCC (MNHCC) and stratified the BCLC-B patients by the sum of tumor size and number (N + S), which combines the two main prognostic factors of BCLC-B patients into a continuous variable[7,8]. BCLC-B patients more suitable for LR were identified by comparing the outcomes, recurrence patterns, and treatments after recurrence in BCLC-B patients in each subgroup with those in BCLC-A patients.

We enrolled BCLC stage A or B MNHCC patients who underwent curative LR in Tongji Hospital from January 2010 to May 2018. The inclusion criteria were: (1) MNHCC pathologically diagnosed with two or more nodules, in which lesions less than 1 cm in diameter and less than 2 cm away from the main nodule were defined as satellite nodules[12]; (2) Curative resection, defined as complete macroscopic removal of all tumors with negative histologic resection margins for the tumors (R0 resection)[13,14]; and (3) No preoperative anticancer treatment other than TACE. The exclusion criteria were: (1) Re-current HCC or combined HCC and cholangiocarcinoma; and (2) Complicated with other malignancies.

Patient data at the time of initial hepatectomy including sex, age, body mass index, hepatitis B antigen status, liver function, tumor characteristics, surgical procedure, and preoperative treatment were recorded. Liver function in this study was classified by the albumin-bilirubin score[15]. Maximum tumor size was defined as the maximum diameter of the largest tumor. Microvascular invasion was defined as tumor within a vascular space lined by endothelium that was visible only on microscopy[16].

In our center, we routinely estimated the residual liver volume in MNHCC patients before hepatectomy, and only patients with residual liver volume of more than 40% of the standard liver volume (for patients with liver cirrhosis) or more than 30% (for patients without liver cirrhosis) would receive LR[17,18]. The decision to perform anatomical or non-anatomical hepatectomy depended largely on the tumor distribution, and major resection was defined as the resection of three or more Couinaud liver segments[19]. Intraoperative ultrasound was routinely used to locate the tumor and screen the nodules. All nodules were completely resected intraoperatively and negative margin was determined according to postoperative pathology.

Patients were followed every month with measurement of serum alpha-fetoprotein (AFP), chest radiography and ultrasound or computed tomography (CT) or magnetic resonance imaging (MRI) in the first 6 mo after discharge from hospital, and every 3-6 mo thereafter. When HCC recurrence was confirmed by CT or MRI, patients were treated with repeated hepatectomy, ablation, TACE or systemic therapy. Follow-up was terminated on May 15, 2022.

Continuous variables were presented as mean ± SD or median (interquartile range; IQR). Categorical variables were described by frequency and percentage. In the comparison of different subgroups, continuous variables were compared using the Student’s t or Mann-Whitney U test, and categorical variables using the χ2 or Fisher’s exact test, as appropriate. Survival was analyzed by the Kaplan-Meier method, and survival curves were compared by the log-rank test. Univariate and multivariate analyses were based on the Cox proportional analysis. Variables with P values less than 0.1 identified by the univariate analysis were included in multivariate analysis. The cutoff value of N + S was determined by X-tile, a bioinformatics tool produced by Camp and colleagues[20]. The area under receiver operating characteristic (ROC) curve (AUC) was compared using DeLong test[21]. P < 0.05 was considered to indicate statistical significance. Both SPSS (version 23.0, SPSS, Inc., Chicago, IL, United States) and MedCalc software (version 20.115, MedCalc Software, Ostend, Belgium) were used for the analysis.

RESULTS
Variables and outcomes of the entire cohort

Stratification of BCLC-B patients based on N + S 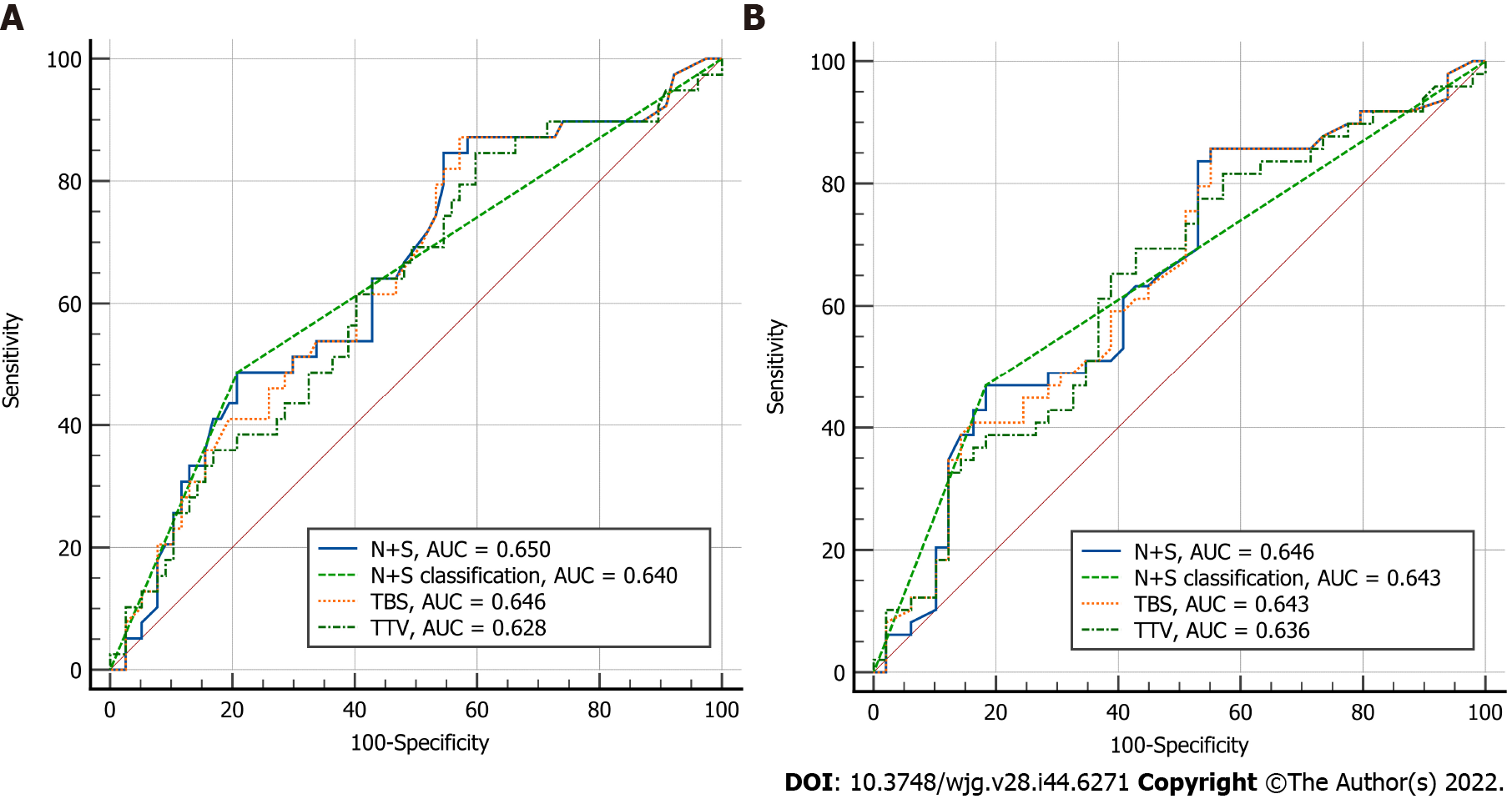 Clinical characteristics, OS and RFS of patients with BCLC-B1, BCLC-B2, and BCLC-A were compared (Figure 2, Supplementary Table 1). The results showed that BCLC-B2 patients had a higher serum AFP level and a larger proportion of bilateral tumor distribution, compared to patients with BCLC-A and BCLC-B1. With an increase in N + S, the maximum tumor size gradually increased, and a larger proportion of patients underwent major resection (Supplementary Table 1).

Comparison of recurrence patterns, treatments after recurrence, and RTDS in BCLC-A, BCLC-B1 and BCLC-B2 patients 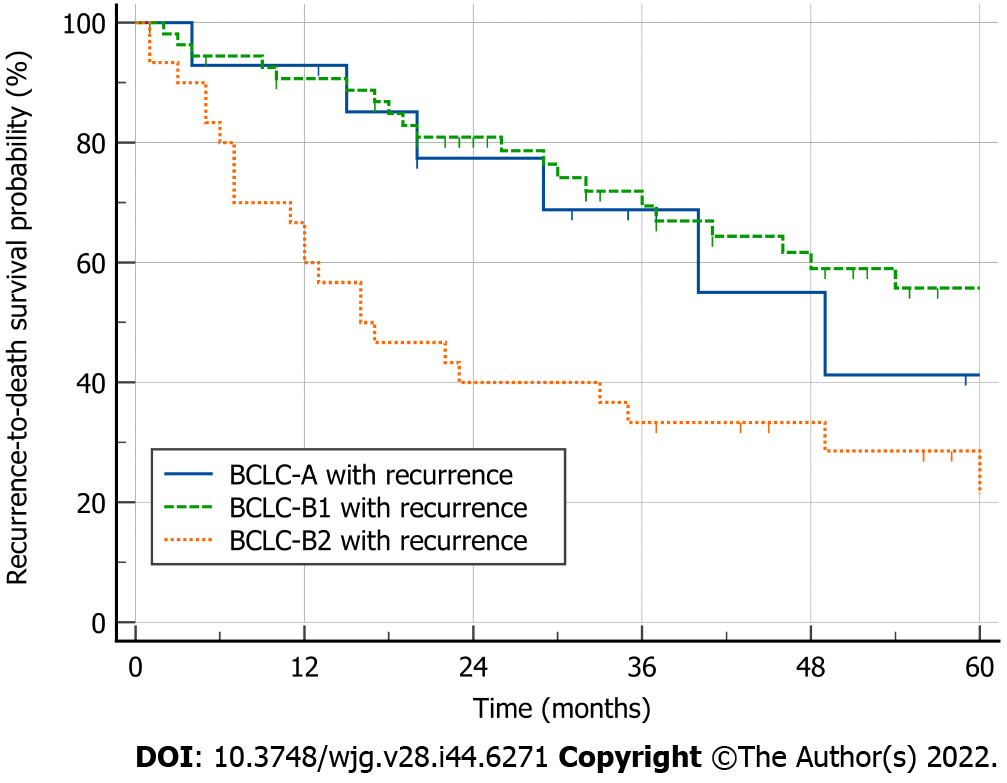 To select BCLC-B patients more suitable for LR, we stratified these patients according to N + S, which has been used to select HCC patients who are more suitable for LT and for TACE[24,25]. In fact, Matsukuma et al[26] suggested that N + S was a good prognostic factor for BCLC-B HCC patients undergoing hepatectomy. The present study increased the cutoff point of N + S from 8 to 10, which may be related to different study cohorts and different calculation methods used for the cutoff value[26]. Nevertheless, the results of this study and in the study by Matsukuma et al[26] demonstrated that N + S could predict the recurrence and OS of BCLC-B HCC patients undergoing hepatectomy. In addition, the present study showed that N + S had a predictive accuracy similar to TBS and TTV in predicting OS in BCLC-B patients. However, compared with the complicated calculation of TBS and TTV, the calculation of N + S is simpler and more suitable for clinical application.

To the best of our knowledge, this study is the first to demonstrate that N + S could predict not only prognosis in BCLC-B HCC patients, but also the recurrence patterns and RTDS in these patients.

In addition, it is interesting to note that patients with BCLC-B1 HCC had worse RFS but comparable OS than patients with BCLC-A MNHCC in this study. In fact, previous studies comparing LT vs LR in HCC patients found a similar phenomenon. These studies showed that although patients receiving LR had a higher rate of postoperative recurrence, the 5-year OS between LR and LT was comparable[27,28]. Previous studies have suggested that the reasons for this phenomenon may be related to noncancerous death in the LT group and treatment after recurrence in the LR group, and our results suggest that it may also be related to the recurrence patterns after LR.

As a single-center retrospective study, the present study has some limitations. Firstly, the sample size was small, which may have affected the accuracy of the results. Secondly, there was a lack of comparison of treatment options other than LR. Some patients with BCLC-B HCC and N + S ≤ 10 would meet the ‘Extended Liver Transplant criteria’, and the best treatment option for these patients remains to be explored[29]. Finally, the results of this study need to be verified by an external cohort.

N + S is a good measure that could predict the OS, RFS, RTDS and recurrence patterns in BCLC-B HCC patients undergoing LR. In particular, BCLC-B patients with N + S ≤ 10 had survivals similar to those of BCLC-A MNHCC patients. Given the computational simplicity of N + S, it is worth exploring the application of N + S to guide decision-making in the treatment of BCLC-B patients.

Emerging studies have shown that Barcelona Clinic Liver Cancer (BCLC) intermediate-stage hepatocellular carcinoma (HCC) patients had a good prognosis after liver resection (LR), but the subgroups of BCLC-B patients more suitable for LR have yet to be defined.

There is a lack of studies on whether the sum of tumor size and number (N + S) can be used to select BCLC-B patients who are more suitable for LR. The effect of recurrence patterns on long-term survival in BCLC-B patients undergoing LR is also poorly explored.

The present study aimed to identify BCLC-B patients more suitable for LR and to further analyze the reasons why these patients could benefit from LR.

BCLC stage A or B multinodular HCC (MNHCC) patients undergoing curative hepatectomy were enrolled. Overall survival (OS), recurrence-free survival (RFS), recurrence-to-death survival (RTDS), recurrence patterns, and treatments after recurrence in BCLC-B patients in each subgroup according to N + S were compared with those in BCLC-A patients.

N + S can be used to select BCLC-B HCC patients who are more suitable for LR, and LR should be considered in BCLC-B patients with N + S ≤ 10.

As a measure that can be easily obtained and calculated in clinical practice, N + S can help with the clinical decision-making in the treatment of BCLC-B HCC patients.