Intrahepatic cholangiocarcinoma (ICC) is one of the most aggressive malignancies. However, because of its scarcity there are limited population-based data available for investigations into its epidemiologic characteristics. In Taiwan, we have a national cancer registry database that can be used to evaluate the secular trends of ICC.

To evaluate secular trends of ICC according to age, sex, and risk factors in Taiwan.

Core Tip: It is important to evaluate the secular trends of intrahepatic cholangiocarcinoma (ICC) incidence and to determine insightful etiological clues in a population with a high incidence of liver cancer. Using the national Taiwan Cancer Registry, we observed an increased incidence of ICC for both males and females. Our observations should be taken in the context of other studies conducted on secular trends of ICC.

Moreover, this population-based data facilitates an unbiased estimate of the burden of ICC into the near future. We aimed to evaluate the current trends of ICC in Taiwan. We investigated secular trends in the incidence of ICC to provide insightful etiological analyses, particularly for the variations by age and sex.

Incidence data from 1993–2017 were obtained from the Taiwan Cancer Registry (TCR). We extracted incidence data on ICC [topography code of International Classification of Diseases for Oncology (ICD-O-FT: T-155.1 before 2002 and ICD-O-3: C22.1, M code 9590-9993 was excluded)]. TCR is organized and funded by the Health Promotion Administration, Ministry of Health and Welfare, Taiwan. In 1979, TCR began to register all cancers nationwide[6,7]. 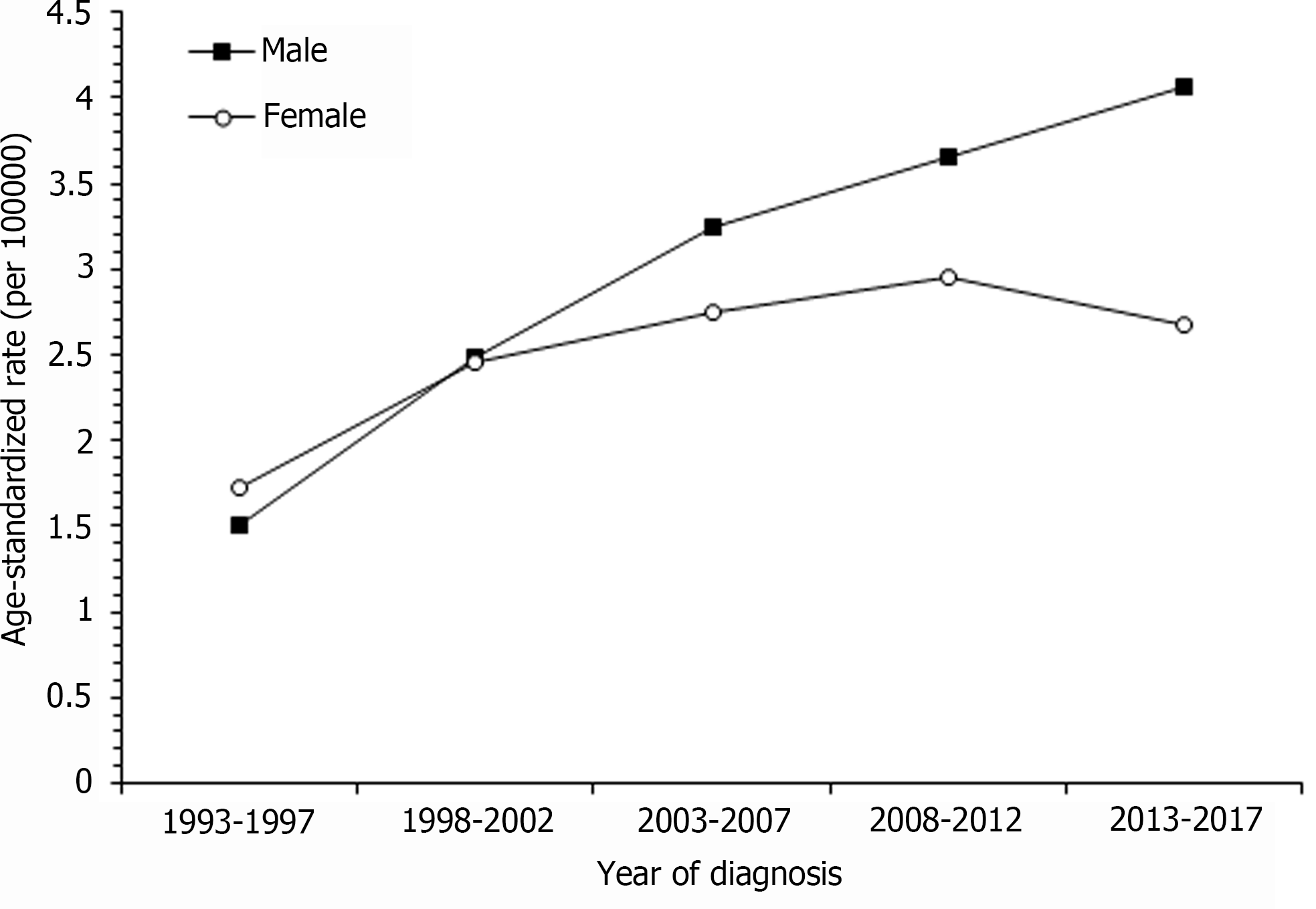 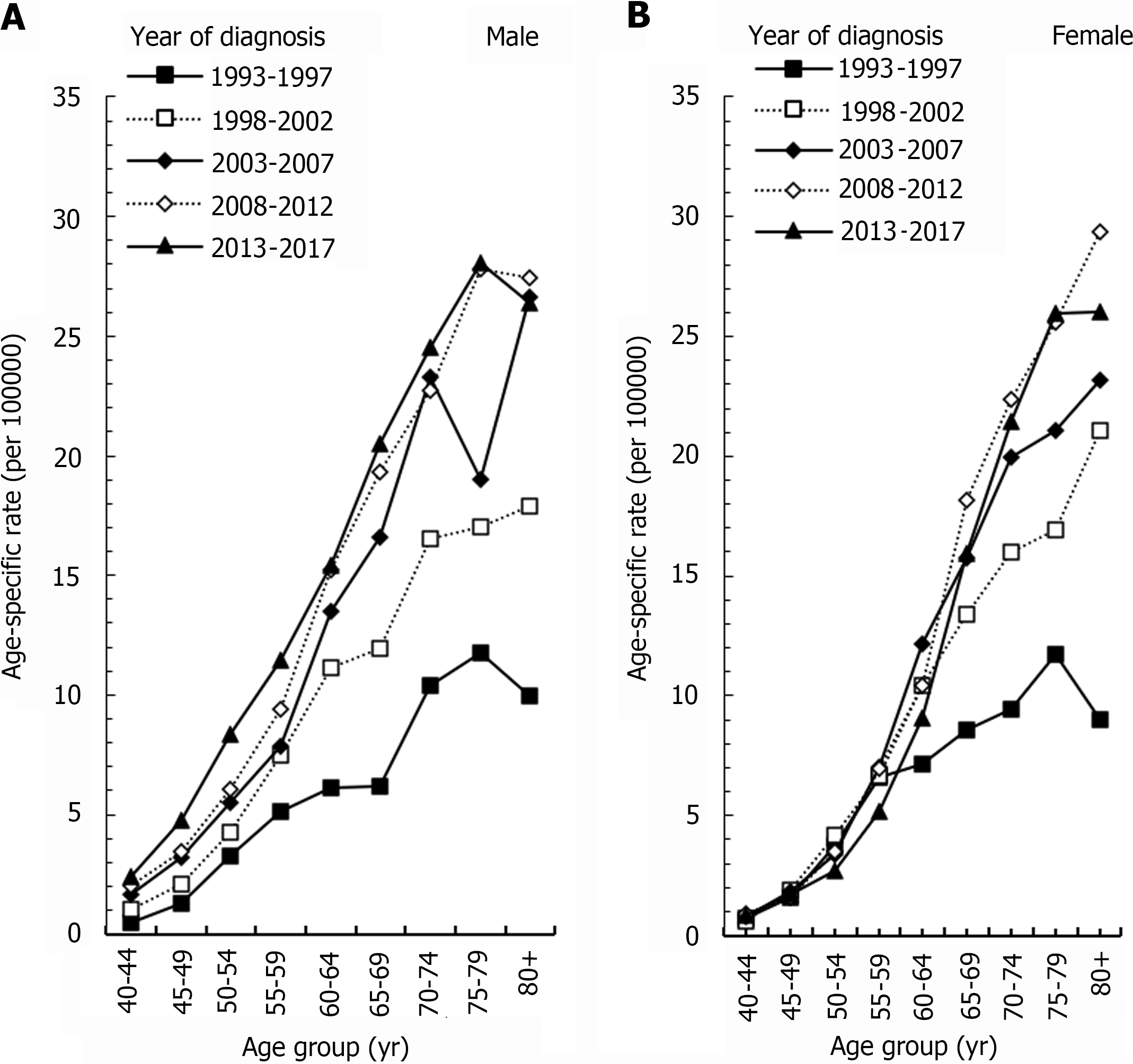 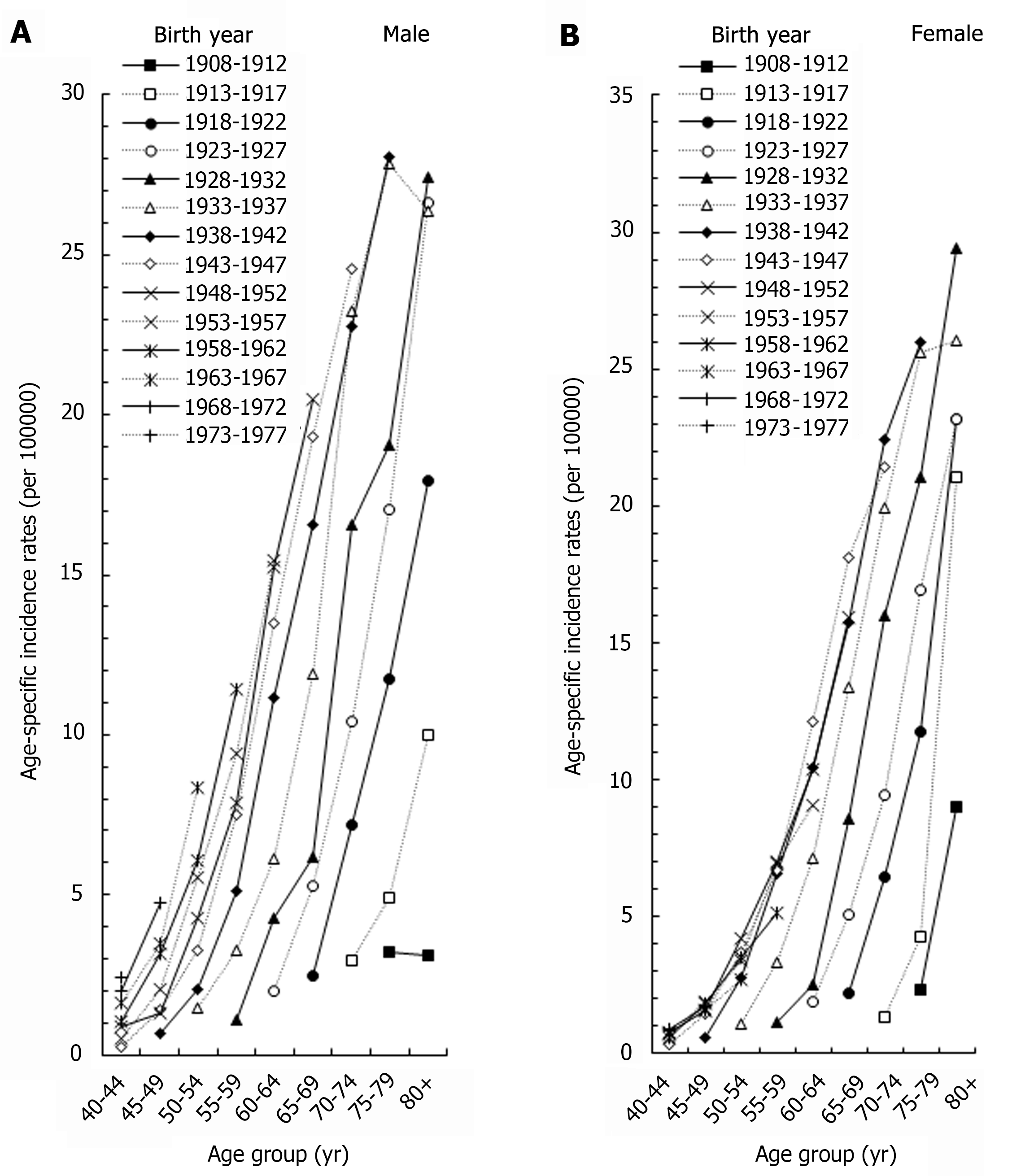 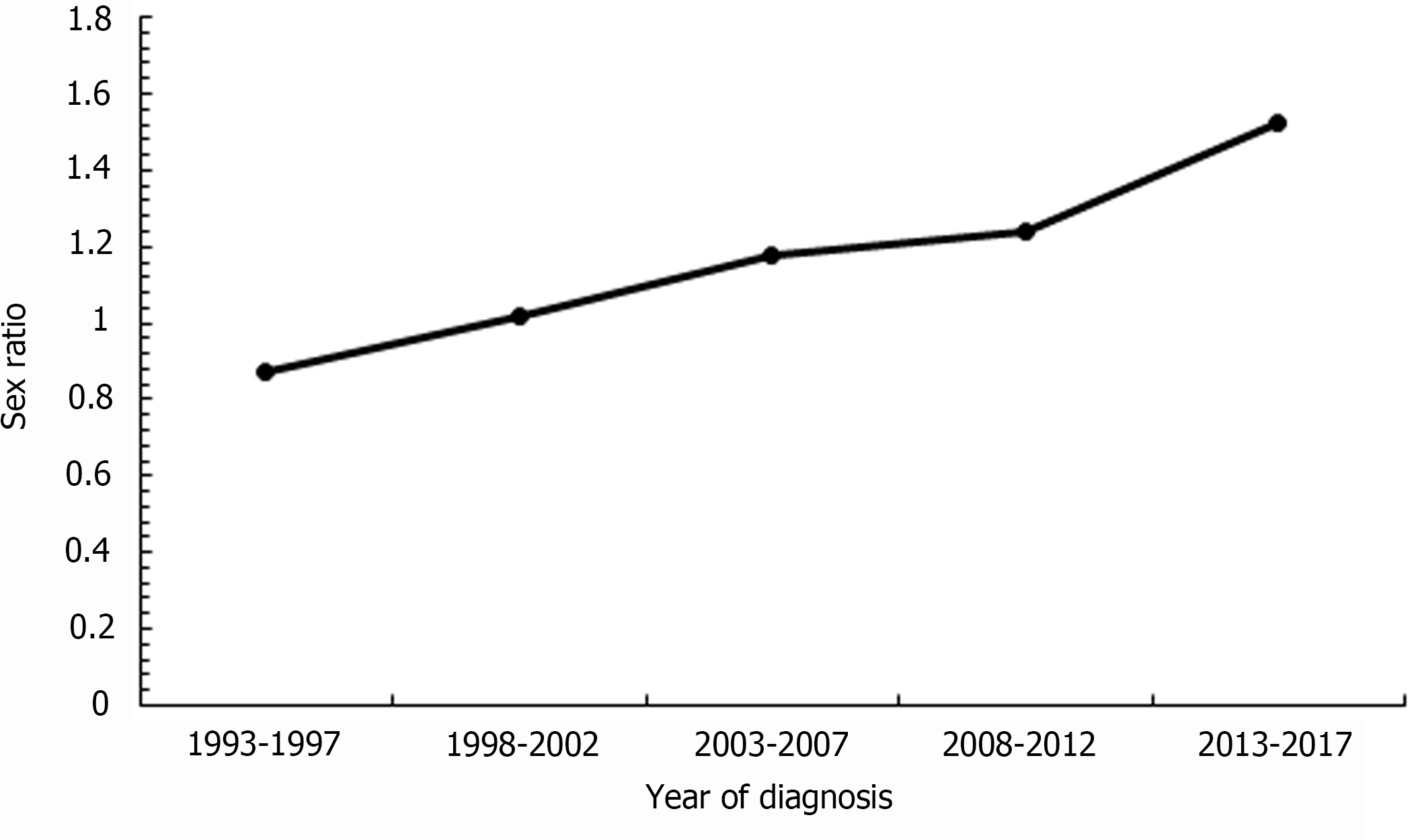 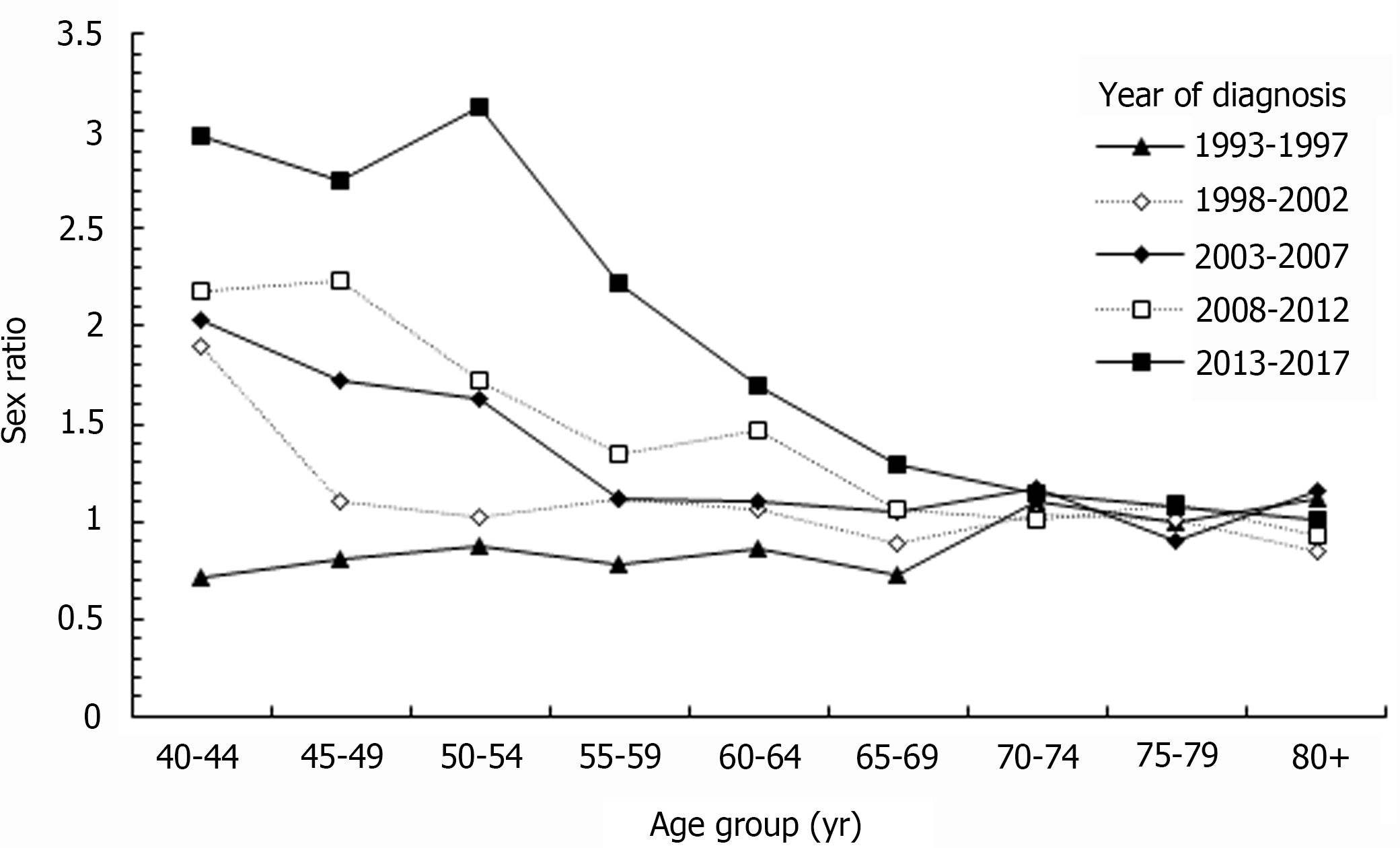 This population-based study showed that the incidence of ICC has rapidly increased in Taiwan. This increase remained after stratification by age, sex, diagnosis period, and birth cohort. These results, which highlight the current and projected incidence of ICC, suggest that there is a need for more research to prevent the burden of this cancer in Asian countries.

An expert consensus document reported that ICC has several risk factors, such as aging of the population, smoking, obesity, diabetes mellitus (DM), hepatitis B virus (HBV) infection, and hepatitis C virus (HCV) infection[4], which may account for this projected increasing incidence. However, due to the number of risk factors of ICC, the phenomenon of the increasing trend of the ICC incidence in Taiwan cannot be explained by a single risk factor.

Aging is an established risk factor for ICC[4]. A study published in 2016 found that the median age at diagnosis among patients in the United States diagnosed with ICC was 67 years between 2008 and 2012[3]. More than 73% of those patients with ICC were older than 60 years[15], which was similar to our results. We found that the incidence rate was low before age 60 and increased dramatically thereafter. The proportion of people in the population aged 60 and above increased from 13.6% in 2007 to 23.2% in 2020 in Taiwan[9]. A previous study found that the aging of populations in developed countries contributes to the increasing incidence of ICC[15]. Nevertheless, we found the age-adjusted incidence increased gradually over time, and the trend remained consistently elevated, even after stratification by age. This implies that population aging has contributed to the increasing ICC incidence in Taiwan.

Smoking is the most comprehensive environmental factor responsible for ICC. A study based on the National Cancer Institute’s SEER 18 database reported that smoking increases the risk of ICC by 46% (95%CI: 1.28-1.66)[20]. A cohort study that included 1518741 individuals showed that current smokers have a 47% greater risk of ICC compared to non-smokers (95%CI: 1.07-2.02)[21]. Taiwan has a high prevalence of smoking. The smoking rate among adult men increased from 59% in 1986 to 63% in 1990, which resulted from the cigarette market opening[22]. A study based on the National Health Interview Survey of Taiwan was conducted in 2001. The prevalence of smokers was 46.8% and the prevalence of ex-smokers was 6.8% in Taiwanese adult males in 2001. The prevalence of smoking was 4.3% and the prevalence of ex-smokers was 0.5% in Taiwanese adult females in 2001[23]. In 2009, a new anti-smoking law was established in Taiwan. Despite the efforts of the Taiwan government, a cross-sectional study that included 961 adults found that up to 42% of sampled Taiwanese adults had smoked cigarettes after that new law had been implemented[24]. The high prevalence of smoking among the early birth cohort in Taiwan may partly explain its high incidence of ICC and seemed to have a cohort effect on ICC.

A previous study reported that ICC incidence rates were higher in males than in females in most countries in the world[5]. The sex ratio of the incidence of ICC was 2.9 in Malta, 1.9 in South Korea, 1.9 in Thailand, 1.9 in Japan, 1.9 in Spain, 1.6 in Slovakia, and 1.6 in France[5]. A study based on the SEER database reported that the incidence of ICC was higher in males than in females, and the sex ratio of the age-specific rates of ICC decreased in the aging group[27]. Our results also showed similar outcomes, and this phenomenon may be due to the different hormone profiles of males and females[28]. A study reported that estrogen may modulate cholangiocyte proliferation in nude mice[29]. A previous study used chromatography-tandem mass spectrometry and competitive electrochemiluminescence immunoassay to analyze the relationship between sex steroid hormones and ICC. In that study, a high level of estradiol was found to increase the risk of ICC (OR: 1.40, 95%CI: 1.05-1.89)[30]. A previous study in Taiwan reported that women born in younger cohorts had a later age at natural menopause (hazard ratio: 0.87 per 10-year difference, 95%CI: 0.81-0.95)[31]. The lower ICC incidence of females in our study may be attributed to decreasing estrogen levels in elderly and postmenopausal women. The lower prevalence of smoking among women (4%-8%) than men (47% in 2001)[22] may also contribute to their lower incidence of ICC.

A retrospective multicenter study in Taiwan reported that the HBsAg prevalence in hepatocellular carcinoma from 1981 to 2001 decreased from 81.5% to 61.2% in males and decreased from 66.7% to 41.4% in females[36]. The sex ratio of HBsAg prevalence of hepatocellular carcinoma increased from 1.22 to 1.61[36], which was consistent with the increasing trend of the sex ratio of the ICC incidence in our study. A previous review hypothesized that HCV could induce the transformation of hepatocytes into cholangiocyte precursors[37]. The HCV antibody prevalence in hepatocellular carcinoma was 31.5% (95%CI: 30.4%-32.6%) in Taiwanese males and 56.7% (95%CI: 54.4%-59.0%) in Taiwanese females[36]. A retrospective cross-sectional study in Taiwan reported that in patients with HCV infection, visceral obesity was significantly associated with waist-to-height ratio, body fat percentage, fat-free mass/body weight, and muscle mass/body weight[38]. Thus, we assumed that HBV and/or HCV infection may be at least partially explain why the incidence of ICC in Taiwan was high.

Surgery is the only curative treatment for ICC[4]. A previous study found the incidence of sarcopenia among ICC patients following receipt of liver resection to be 50%. Preoperative nutritional evaluation is important for ICC[41]. In addition, nutritional factors may affect the disease incidence. Indeed, a population-based cohort study found that regular use of oil supplement lowered the risk of total liver cancer to 44% (95%CI: 25%-59%) and risk of ICC to 40% (95%CI: 7%-61%)[42]. A meta-analysis suggested that vegetable and fruit consumption may reduce the risk of ICC; specifically, the reported ORs of mixed vegetables, mixed fruits, and combined fruits and vegetables were 0.61 (95%CI: 0.50-0.75), 0.79 (95%CI: 0.65-0.96), and 0.68 (95%CI: 0.57-0.80), respectively[43]. A multi-center study determined that high dietary fiber intake could be associated with a lower risk of intrahepatic bile duct cancer[44]. Finally, an animal model-based study in Taiwan provided further evidence of a relationship between ICC and nutrition; vitamin D supplementation lead to significant suppression of ICC initiation and progression in the rat model via regulation of gene expression (e.g., of lipocalin 2)[45].

This study has several limitations. As seen in other studies based on cancer registry databases[46], a substantial portion of cases did not receive histological verification. Old age and advanced tumor stage at presentation likely prohibited this verification. Nevertheless, integrity of the TCR database was 98.4%[47]. The morphological veriﬁcation percentage of the TCR database is 93.0%[47], which minimizes the misdiagnosis of cancer incidence. In addition, quality and accuracy of clinical diagnosis in our databases has been validated, and the percentage of death certiﬁcate-only data is 1%[47]. In addition, we extracted the ICD-O-FT: T-155.1 before 2002 and ICD-O-3: C22.1 from 2003–2017, which may misclassify some diagnostic cases. However, due to the rarity of ICC cases in Taiwan, this deviation did not affect the statistical trend outcomes in our study. In addition, restriction to cases with histological proof would have introduced selection bias. Ultimately, although our study found that there are various risks associated with ICC, including sex, age, DM, HBV and/or HCV infection, obesity, nutritional factors, and smoking, the results need to be validated in larger cohorts, exploring the risk of ICC development in a high incidence area in particular.

The incidence of ICC continues to rise in Asia. The etiological role of ICC is still unclear. However, future prospective evaluations are warranted to explore potential risk factors of ICC. The assessment of their independent and/or interactive effects are suggested, which could lead to prevention of ICC, development of early detection methods for early curative surgery, and identification of potential prognostic factors related to improved therapy and outcomes.

Intrahepatic cholangiocarcinoma (ICC) is one of the most aggressive malignancies. However, because of its scarcity few population-based studies have explored its epidemiology. In Taiwan, we have a national cancer registry database, which can be used to evaluate the epidemiology of ICC.

To discover the secular incidence trends and associated risk factors of ICC in Taiwan.

To observe secular trends in ICC incidence according to age, sex, and risk factors in Taiwan.

An increased incidence of ICC has occurred in Taiwan over the past two decades. The increased sex ratios has progressively shifted toward younger people.

Further long-term cohort studies are needed to investigate the relationship between ICC and its risk factors.

The authors would like to express their gratitude to the Fu Jen University Foundation.