APRI and BARD scores do not perform well in MAFLD. The FIB-4 and NFS could be more useful, but a new threshold is needed. Novel non-invasive scoring systems for fibrosis are required for MAFLD.

Nonalcoholic fatty liver disease (NAFLD), defined as excessive fat accumulation in liver cells in the absence of other liver diseases, has become a new epidemic due to its growing prevalence[1,2]. To date, NAFLD is believed to affect more than a quarter of the global population[2,3]. The natural history of NAFLD is highly variable; however, it is believed to progress through various fibrosis stages to end up in liver cirrhosis in a significant number of patients. The development and grade of liver fibrosis are strongly related with the adverse outcomes of NAFLD[4-6]. Thus, it is critical to identify patients with advanced fibrosis to optimize the management of NAFLD.

Liver biopsy is currently regarded as the “gold standard” for the diagnosis of liver fibrosis. However, due to the high prevalence of NAFLD, it is impossible to perform a biopsy for each patient. Moreover, the inherent issues including safety, sampling errors, and the inter- and intraobserver variation limit its application[7,8]. These limitations warrant the need for non-invasive scores for assessing liver fibrosis.

Metabolic associated fatty liver disease (MAFLD) is a recently proposed concept to replace NAFLD[14]. Significantly different from NAFLD, the MAFLD definition does not require the exclusion of any chronic liver diseases; however, the presence of metabolic associated disease or dysfunction is required[15,16]. It is known that metabolic profiles are associated with a risk for severe fibrosis in patients with NAFLD[17]. The MAFLD population has been found to have higher non-fibrosis scores than NAFLD individuals[18]. Thus, in the light of the new concept of MAFLD, which incorporates metabolic disorder, the performance of these non-invasive models requires re-evaluation and further validation. This study aimed to evaluate the utility of conventional non-invasive scoring systems in MAFLD.

The study protocol was approved by the Institutional Review Board of the First Affiliated Hospital of Fujian Medical University and was in accordance with the Declaration of Helsinki. Written consent forms were obtained from all patients. The data was anonymized prior to the analysis.

Consecutive patients with histologically confirmed MAFLD admitted to the First Affiliated Hospital of Fujian Medical University from 2005 to 2015 were retrospectively analyzed in this study.

All patients enrolled in this study underwent percutaneous liver biopsy under ultrasonic guidance. The liver specimens were fixed in formalin, embedded in paraffin, and stained with hematoxylin and eosin and Masson’s trichrome. The minimum biopsy length was 15 mm, and at least six portal areas were required[19]. Histopathological slides were reviewed independently by two pathologists experienced in reading liver histopathology slides and were blinded to the patient’s clinical data.

The diagnosis of MAFLD was based on the following criteria[15]: A histological evidence of hepatic steatosis and the presence of one of the following three conditions: BMI ≥ 23 kg/m2, presence of type 2 diabetes mellitus, or evidence of metabolic dysregulation. The metabolic dysregulation was defined by the presence of at least two of the following conditions: (1) Waist circumference ≥ 90 cm in men and 80 cm in women; (2) Blood pressure ≥ 130/85 mmHg or specific drug treatment; (3) Plasma triglycerides ≥ 1.70 mmol/L or specific drug treatment; (4) Plasma high-density lipoprotein cholesterol < 1.0 mmol/L for men and < 1.3 mmol/L for women or specific drug treatment; (5) Prediabetes (i.e. fasting glucose levels 5.6-6.9 mmol/L or 2 h post-load glucose levels 7.8-11.0 mmol/L or glycated hemoglobin 5.7%-6.4%; (6) Homeostasis model assessment-insulin resistance score ≥ 2.5; and (7) Plasma high-sensitivity C-reactive protein level > 2 mg/L.

All biochemical assessments were performed by standard laboratory methods. Non-invasive liver fibrosis assessment scores included APRI, FIB-4, BARD, and NFS, which were calculated based on previously published formulas as shown in Table 1[10,12,21,22].

RESULTS
Baseline characteristics of the patients

A total of 417 patients with biopsy-proven MAFLD were included in this study (Figure 1). All patients were treatment-naïve and did not receive nucleosides analogue treatment before biopsy. The mean age was 40.54 ± 10.95 years, and the BMI was 25.48 ± 2.66 kg/m2. Of them, 354 (84.9%) were male, 82 (19.7%) had type 2 diabetes mellitus, 42 (10.1%) had hypertension, and 156 (37.4%) had advanced fibrosis (Table 2). Liver histological examination showed that 272 (76.0%) HBV-MAFLD patients had significant inflammation (grade ≥ 2). Antiviral therapy was initiated when chronic hepatitis B was diagnosed with the presence of significant inflammation (grade ≥ 2) or significant liver fibrosis (stage ≥ 2). Patients with advanced fibrosis were significantly older and had higher AST and lower albumin, triglyceride, and platelet counts. In addition, the FIB-4 (P < 0.001), NFS (P < 0.001), APRI (P = 0.003) and BARD (P < 0.001) scores were all significantly higher in patients with advanced fibrosis compared with patients with no/mild fibrosis. 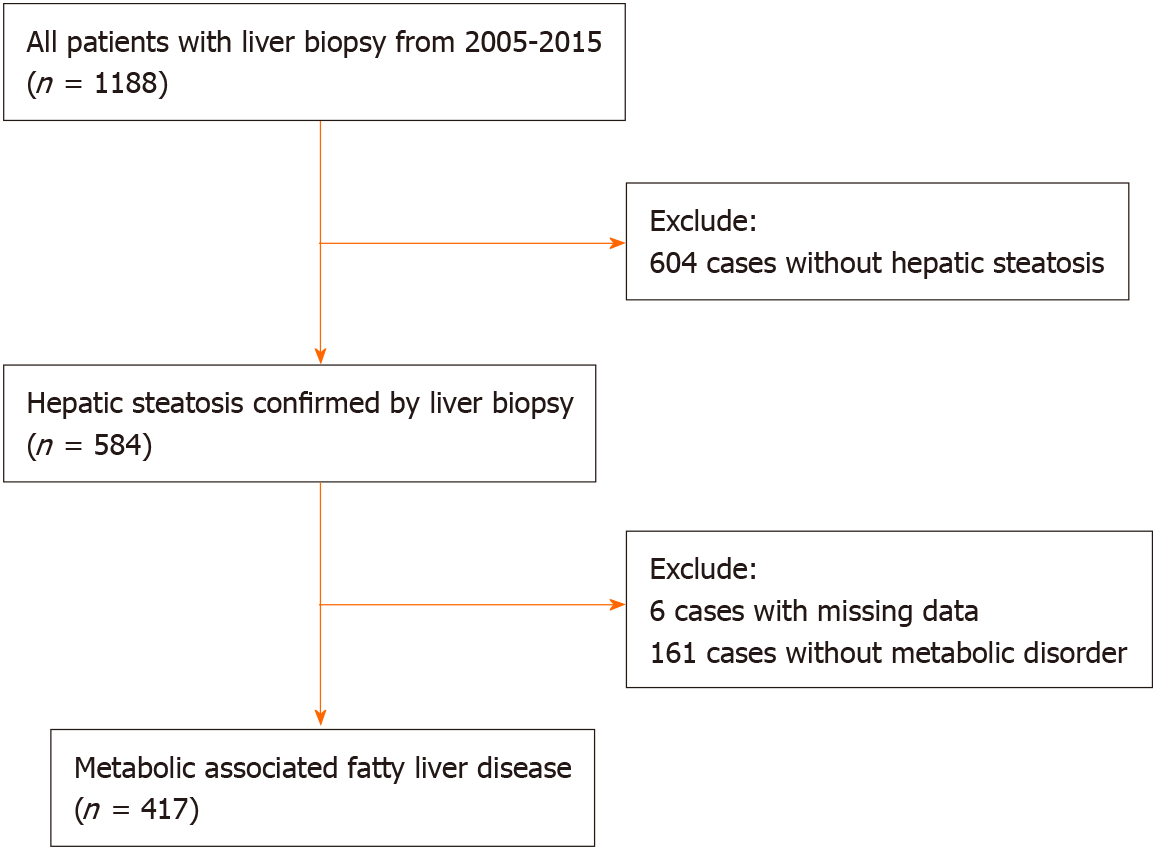 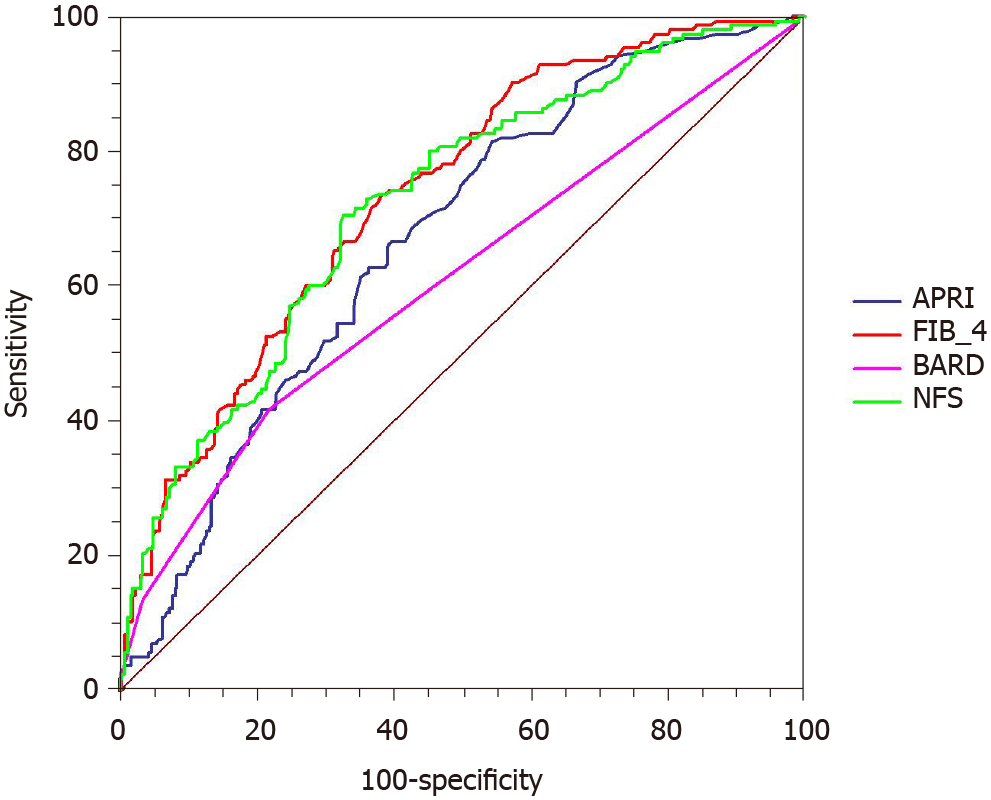 Table 3 summarizes the best cutoff values developed for prediction of advanced fibrosis by the four non-invasive models and the validation of previously reported cutoffs (for NAFLD) in this MAFLD cohort[10-12,21,22]. The best cutoff scores of FIB-4, APRI, NFS, and BARD for the diagnosis of advanced fibrosis in MAFLD were 1.05, 0.42, -2.1, and 2, respectively. Most cutoff scores were lower than the prior reported thresholds for each model. Using the newly developed thresholds, the sensitivity, specificity, PPV, and NPV of the above four models ranged from 41.7%-81.4%, 44.4%-78.2%, 46.7%-55.8%, and 69.2%-80.0%, respectively (Table 3).

The accuracy of the FIB-4 and NFS scores, irrespective of the numerical value of cutoff used, was only 63.8%-68.8%. The accuracy was even lower for APRI and BARD (58.3%-64.5%). On the other hand, 20%-35% patients with biopsy-proven advanced fibrosis were misdiagnosed as no advanced fibrosis by these four scores (Table 3).

Non-invasive scoring systems are widely used to identify or exclude advanced fibrosis in patients with chronic liver disease. The main finding of our study is that FIB-4 and NFS performed better than APRI and BARD in MAFLD patients. These scores are more useful in HBV-MAFLD than in pure MAFLD population. However, the performance of all above models was not as good as previously reported in NAFLD.

The non-invasive fibrosis scoring systems are derived from widely available clinical, laboratory, and anthropometric parameters. Although the APRI and BARD scores are more user-friendly, their discrimination ability in prediction of advanced fibrosis is not satisfactory in this group of MAFLD patients. The AUROC of BARD was 0.609, and the accuracy was less than 65%. It is not a surprising result as the two variables for calculating BARD score (BMI and diabetes) were also variables for the diagnosis of MAFLD. This led to lower sensitivity and higher false positivity for detecting advanced fibrosis in MAFLD patients, thus the BARD score should not be recommended for MAFLD patients in clinical practice. Although APRI score was easy to calculate, it did not perform well in MAFLD as well. The NPV did not exceed 80%, and the PPV was only around 50% at any cutoff value tested. Thus, APRI should not be used for assessment of advanced fibrosis in the MAFLD population either.

The calculations of FIB-4 and NFS require the use of more complex formulas and may not be easy to use. Even though the results of our study indicate that both FIB-4 and NFS significantly outperform APRI and BARD for the prediction of advanced fibrosis in MAFLD, the NPV and PPV of these two models did not reach the similar values reported by previous studies using the cohort of NAFLD patients[10,11,24]. According to the previously reported studies on patients with NAFLD[10,11,24], when the cutoff of the FIB-4 and NFS was set at 1.3 and -1.455, respectively, the NPV increased from 90% to 93%. When the cutoff of the FIB-4 was set at 2.67, the PPV could reach 80%. However, in our cohort of MAFLD patients, by using the aforementioned cutoffs, or the new threshold found in the present study, the NPV did not exceed 75%, and PPV did not exceed 70%. This finding is of utmost clinical importance and indicates that in the light of the new concept of MAFLD, newer non-invasive fibrosis scores need to be developed and validated to assess the presence of advanced fibrosis in patients with MAFLD. Another worrying yet important finding of our study is that the use of these non-invasive fibrosis scores, even with the new cutoffs, led to a misdiagnosis of no advanced fibrosis in 20%-35% of the patients in this cohort (Table 3) when the histology actually showed the presence of advanced fibrosis.

The occurrence of HBV infection and fatty liver disease is frequently seen in Asian countries[25]. As our cohort consisted of 359 (86.1%) patients with chronic HBV infection, we performed a subgroup analysis to test the performance of the non-invasive scores in a pure MAFLD group, which is very close to previous NAFLD and HBV-MAFLD group. Three of the four non-invasive models (FIB-4, NFS, and APRI) performed even worse in the pure MAFLD group than in the HBV-MAFLD group. We speculate that the higher levels of ALT and AST and lower platelets in HBV-MAFLD might result in higher scores of the non-invasive models and make them easier to discriminate the advanced fibrosis. As MAFLD is a new entity, this result further reinforces the need to develop and validate novel scoring systems for fibrosis in the MAFLD population.

The strength of our study is that, to our knowledge, this is the first validation of conventional non-invasive fibrosis scoring systems in a large sample of histology-proven MAFLD. However, this study has some limitations. Firstly, a large proportion of included patients (86%) had concomitant chronic HBV infection, which could be a potential limitation as the western MAFLD population differs substantially from Asia’s population in the HBsAg seropositivity rates, the results may only be applicable to a subset of the entire MAFLD pool namely HBV-MAFLD, which is the most important subtype of MAFLD in clinical practice in Asia. Secondly, as our study is a single-center study with only an Asian population, the findings will need further validation in other Asian and western cohorts.

APRI and BARD scores do not perform well and are not suitable for the diagnosis of advanced fibrosis in MAFLD. The FIB-4 and NFS could be more useful, and we propose a new threshold of 1.05 and -2.1, respectively, which had the best diagnostic performance for advanced fibrosis. There is an urgent need of a novel non-invasive scoring system for predicting advanced fibrosis in patients with MAFLD including its subtypes.

Consecutive patients with histologically-confirmed MAFLD admitted to a single medical center were included. The discrimination ability of different non-invasive scores was compared.

APRI and BARD scores do not perform well in MAFLD. The FIB-4 and NFS could be more useful, but a new threshold is needed.

MAFLD is a new entity. The results of this study indicate the conventional scores may lead to misdiagnosis, and the development of novel scoring systems to assess fibrosis in the MAFLD population is urgently needed.