Enteropathy-associated T cell lymphoma (EATL) is an aggressive intestinal T cell lymphoma derived from intraepithelial lymphocytes, which occurs in individuals with celiac disease (CD). Cerebral involvement is an extremely rare condition and as described so far, lymphoma lesions may present as parenchymal predo-minantly supratentorial or leptomeningeal involvement. We describe a case of EATL with multifocal supra- and infratentorial brain involvement in a patient with refractory celiac disease (RCD).

EATL with cerebral involvement must be considered as a possible differential diagnosis in patients with known RCD presenting with neurological symptoms.

Enteropathy-associated T cell lymphoma (EATL) is a rare and aggressive type of peripheral T cell lymphoma (PTCL), accounting for approximately 5% of PTCL[1]. It is a primary intestinal lymphoma, typically affecting the jejunum and ileum, and is often associated with celiac disease (CD)[2]. Extraintestinal involvement is a rare complication with poor prognosis. Concerning cerebral involvement, predominantly supratentorial parenchymal lesions or leptomeningeal involvement have been described in few case reports, either as primary cerebral lymphoma or secondary to intestinal EATL, whereas infratentorial lesions are extremely rare and were only reported once[3-8]. We herein present an extraordinary case of EATL with simultaneous multifocal supra- and infratentorial brain involvement in a patient with refractory celiac disease (RCD).

A 58-years old man with the known history CD consulted his gastroenterologist due to upper stomachache, postprandial bloating and involuntary weight loss (15 kg within one month).

Apart from CD, the patient had no relevant previous illnesses.

At the actual consultation the patient presented in normal nutritional, but slightly reduced general condition. Physical examination revealed diffuse tenderness of the abdomen, but otherwise no abnormal findings. Clinical neurological examination was unsuspicious.

As initial gastroscopic evaluation was inconspicuous, contrast MRI of the abdomen was performed exposing prominent mesenterial lymphadenopathy in the left upper abdominal quadrant. Capsule endoscopy revealed ulcerative lesions in the proximal jejunum and ileum, which were consequently biopsied via push-endoscopy.

Histological examination of the jejunal biopsies revealed ulcerative jejunitis type II (Figure 1) with an increased population of immunophenotypically abnormal intraepithelial lymphocytes (IEL) (Figure 2). Diagnosis of RCD type II was made and an immunosuppressive therapy with methylprednisolone and azathioprine initiated. The patient´s condition slightly improved within weeks. 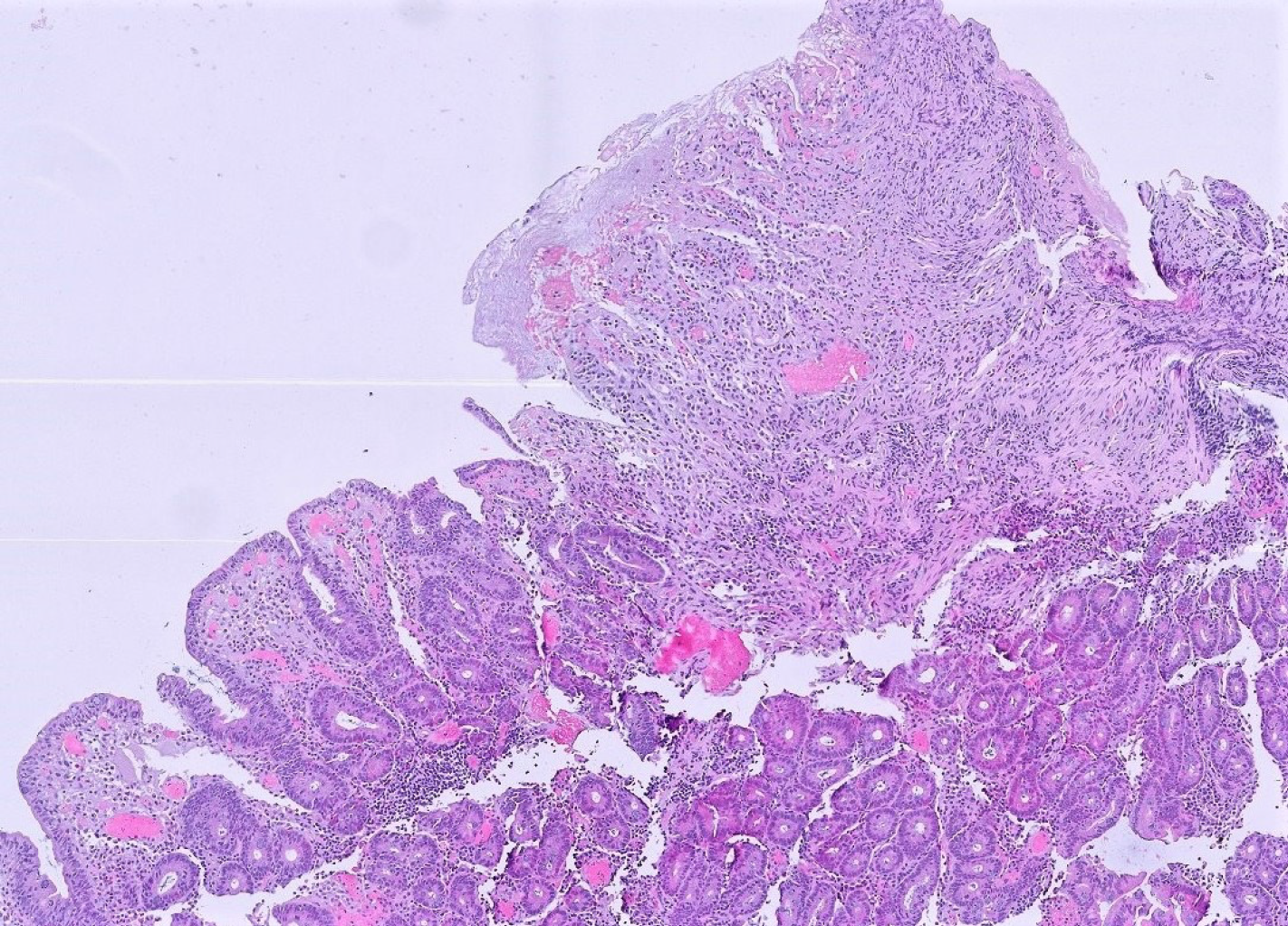 Figure 1 Biopsies from an area with ulcerative jejunitis. On the right there is an erosion without lymphomatous involvement. Adjacent mucosa shows villous flattening. Magnification 200 ×. 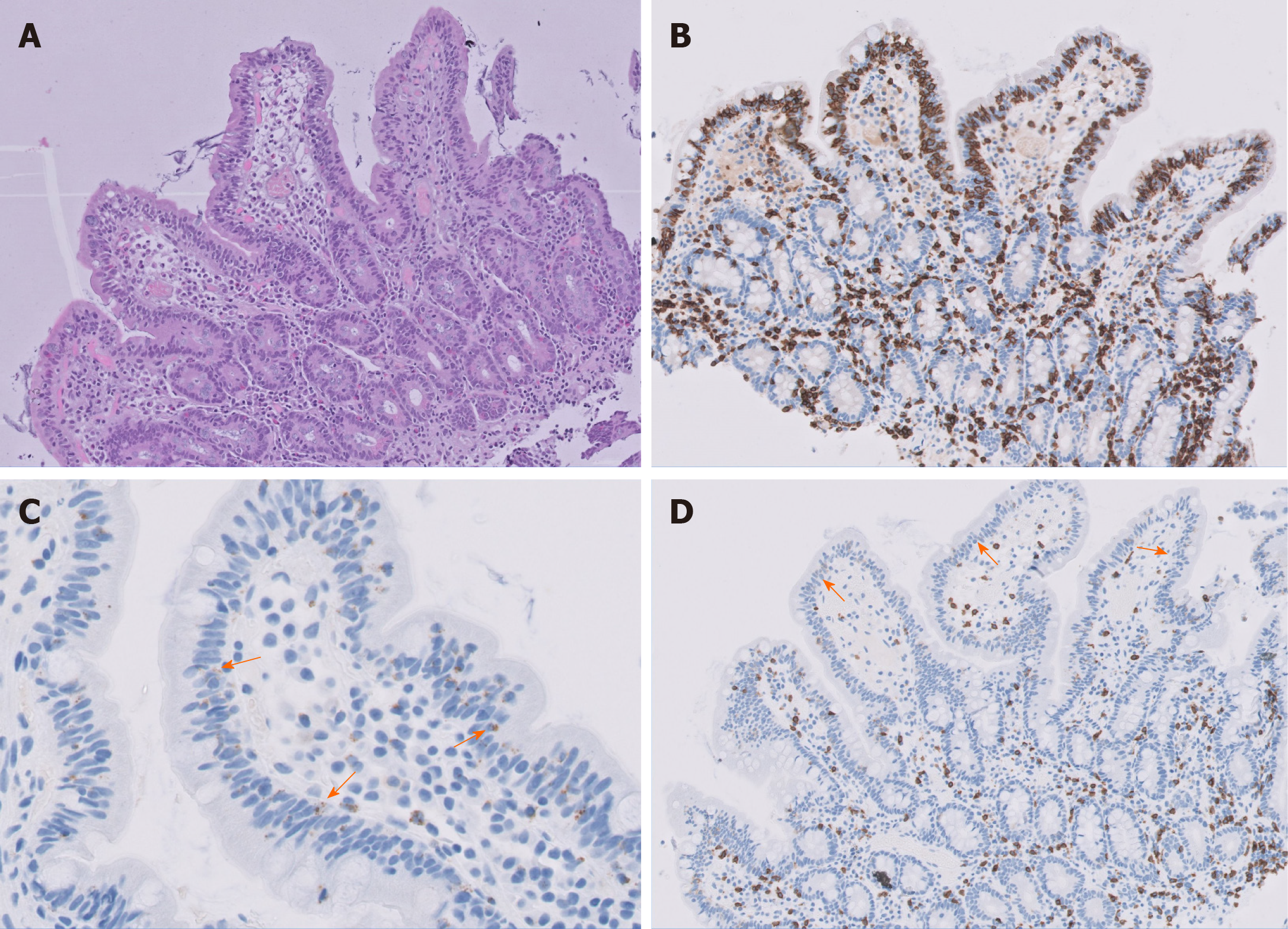 Due to rapid worsening of the patient’s neurological condition, particularly progression of the cerebellar syndrome, an empiric therapy with intravenous high-dose methylprednisolone (1 g daily for five days) was initiated and clinical improvement followed promptly. Yet, repeated cranial MRIs showed the intracranial lesions stable in size and location.

For further evaluation, an 18FDG-PET/CT scan was performed revealing a hypermetabolic lesion in the left upper abdomen. Recurrent endoscopic biopsies of the respective jejunal ulcerations indicated the known diagnosis of RCD type II. Due to high clinical suspicion of lymphoma, the patient consequently underwent surgical resection of the affected jejunal part. 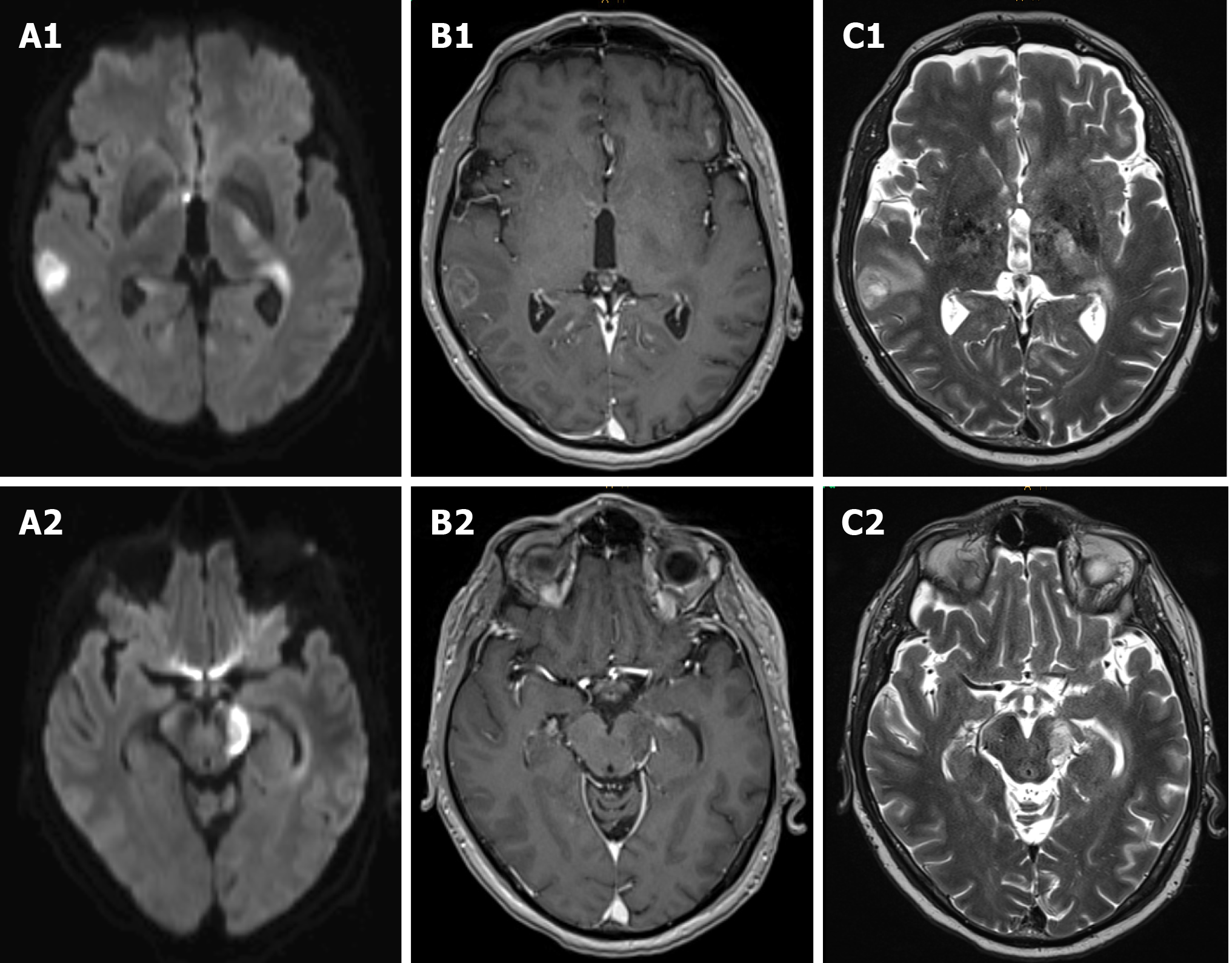 Histological workup of the jejunal specimen confirmed the diagnosis of EATL with infiltration of the subserosa and covered perforation (Figure 4A and B). Resection lines were free of tumor. Consequently, the cerebral lesions were interpreted as CNS involvement of the EATL. 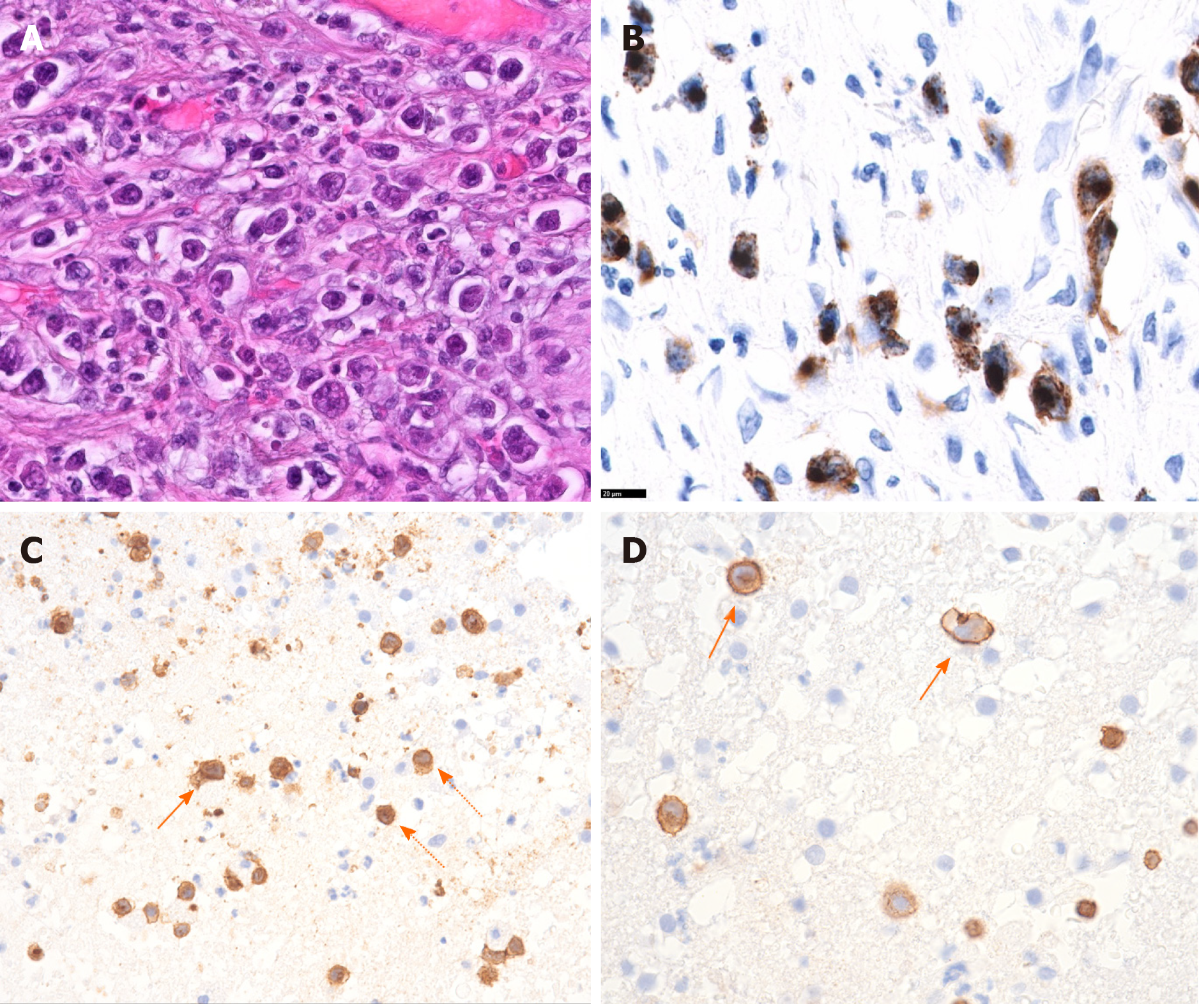 Unfortunately, the patient showed only transient and little clinical improvement in response to methotrexate. Given this discrepancy and the hope to re-define diagnosis, a brain biopsy was performed. Histopathological examination by Prof. Hainfellner J (Medical University Vienna, Division of Neuropathology) could lastly confirm the suspicion of cerebral involvement of primary intestinal EATL (Figure 4C and D).

Due to poor prognosis and lack of therapeutic options, the patient was transferred to a hospice facility. He passed away three weeks after the definitive diagnosis had been made.

EATL is a rare and aggressive primary intestinal lymphoma, accounting for approximately 5% of PTCL cases, with an incidence of 0.05-0.14/100000 in Europe[1]. It may evolve de novo or progress from RCD (particularly RCD type II) via a multi-step process. RCD is defined as lack of clinical and histological response to at least twelve months of rigid gluten free diet (i.e., normalization of antibody titers) and after exclusion of other possible causes of villous atrophy. RCD may present in form of chronic ulcerative jejunitis[1]. While patients with de novo EATL show a 5-year overall survival (OS) of 59%, those cases evolving from RCD type II show a poor prognosis with 5-year OS of 0%-8%[1]. In these patients extraintestinal manifestations are seen more frequently.

EATL most frequently occurs in the 5th to 6th decade and is usually diagnosed in advanced disease stages, as it was seen in our case. Typical symptoms include abdominal pain, vomiting/nausea, B symptoms as well as signs of intra-abdominal sepsis or intestinal perforation. Time span between diagnosis of CD and EATL varies between a few months to several decades[2]. In our patient, it was eight years.

The small intestine is the most commonly affected site (jejunum, ileum, duodenum in descending order) with frequent involvement of mesenteric, para-aortic or iliac lymph nodes[2], as also observed in our case. Bone marrow involvement is uncommon[9] and was not seen in our patient. Furthermore, EATL may be observed in the stomach[2], colon[10,11], liver, lung and skin[12]. Cerebral manifestation is extremely rare[13] and up to now, six case reports, either as primary cerebral lymphoma or secondary to intestinal EATL, have been published[3-8]. When EATL involves the CNS, it may present as lymphomatous dissemination in the form of parenchymal lesions predominantly supratentorial or as leptomeningeal involvement[3,6,14]. The MRI scans of our patient showed not only multifocal supratentorial lesions, but also brainstem and cerebellar involvement, which has been described only once so far[5].

EATL is usually diagnosed by histopathological examination of small bowel biopsies or resection specimens and is based upon characteristic histological and immunophenotypic findings as well as T cell clonality analysis. In our patient, EATL only scarcely affected the intestinal mucosa but showed predominant destruction of muscularis and subserosa, therefore endoscopic biopsies were repeatedly inconclusive. In the jejunal resection specimen diagnosis could lastly be made. In case of brain involvement, radiological diagnosis is best accomplished by contrast-enhanced T1-and T2 weighted MRI, demonstrating either a diffuse high intensity signal along the CSF space in case of leptomeningeal seeding, or a localized irregular, ill-defined enhancing lesion exemplifying parenchymatous penetration[3,5,6]. As demonstrated in our patient, biopsies or resection of extraintestinal manifestations including cerebral lesions can be considered to confirm diagnosis in cases of inconclusive histological results or poor treatment response.

Histologically, the jejunal resection specimen showed an infiltration of medium- to large-sized lymphoid cells with anaplastic features (Figure 4A and B). Immunophenotypically, the neoplastic cells were CD30+, CD103+, CD8+, CD7+, granzyme B+ (Figure 4 B) as well as TCRδ+, but negative for βF1, CD4, CD2, CD5, and CD56. The cerebral biopsy showed a loosely scattered infiltration of very similar large anaplastic CD3+ tumor cells (Figure 4C and D).

In EATL, the primary treatment involves surgical local debulking followed by systemic chemotherapy, preferably two to five weeks after surgery[15-17], as also performed in our patient. Up to now, there is no standard chemotherapy protocol for EATL. In PTCL, anthracycline-based chemotherapy is widely used such as cyclophosphamide, doxorubicin, vincristine and prednisolone (CHOP) or CHOP-like chemotherapy[18,19]. The aggressive combination of ifosfamide, epirubicin, and etoposide (IVE) with intermediate-dose methotrexate (MTX) followed by autologous stem cell transplantation (ASCT) has shown potent anti-tumor effect and improved response rate in patients with EATL[20]. Unfortunately, a great number of patients are unable to complete chemotherapy due to poor performance status and severe malnutrition[17,20]. As for targeted therapy approaches, the CD30-directed antibody drug conjugate brentuximab-vedotin (BV) is of particular interest, having shown to improve outcomes in patients with CD30+ PTCL in combination with chemotherapy. Currently, data on the effect of BV in patients with EATL is limited, however few encouraging results of BV either in combination with intensive chemotherapy/ ASCT[21] or as monotherapy[22] have been reported. Further studies are ongoing (e.g., NCT03217643). Other targeted drugs, such as histone deacetylase (HDAC) inhibitors or immune-checkpoint inhibitors are under clinical investigation in PTCL including EATL, however most studies exclude cerebral involvement.

Neurosurgical indication for resection of symptomatic cerebral lesions is similar to that of other types of intracranial metastasis and may be followed by focal or whole brain radiotherapy. In case of leptomeningeal involvement, the best treatment options are chemotherapy, followed by craniospinal irradiation[3-6]. In our patient, after surgical resection of the affected jejunal part, a systemic chemotherapy with methotrexate was started. Unfortunately, the patient´s status deteriorated quickly after a short transient clinical improvement after the chemotherapy, therefore treatment was switched to best supportive care. Considering our case and previously reported findings, the prognosis and outcome of EATL with CNS involvement is poor and is not significantly improved by aggressive surgical and systemic treatments.

In summary, EATL may present with primary or secondary extraintestinal manifestations, with brain involvement being an extremely rare complication with poor prognosis despite aggressive surgical and medical treatment. To our knowledge, this is the first reported EATL case with simultaneous multifocal supra- and infratentorial brain involvement. As demonstrated in our patient, a biopsy of extraintestinal manifestations including biopsy or resection of cerebral lesions could be considered to confirm diagnosis in case of inconclusive histological results or poor treatment response.

EATL with cerebral involvement is a rare but severe complication and must be considered as a diagnostic possibility when a patient with known RCD presents with neurological deterioration. A multidisciplinary approach to the disease is required for both an early diagnosis and prompt treatment, increasing the likelihood of a positive outcome.