Radical resection is an important treatment method for hepatic echinococcosis. The posterosuperior segments of the liver remain the most challenging region for laparoscopic or robotic hepatectomy.

To demonstrate the safety and preliminary experience of robotic radical resection of cystic and alveolar echinococcosis in posterosuperior liver segments.

A retrospective analysis was conducted on the clinical data of 5 patients with a median age of 37 years (21-56 years) with cystic and alveolar echinococcosis in difficult liver lesions admitted to two centers from September to December 2019. The surgical methods included total pericystectomy, segmental hepatectomy, or hemihepatectomy.

Among the 5 patients, 4 presented with cystic echinococcosis and 1 presented with alveolar echinococcosis, all of whom underwent robotic radical operation successfully without conversion to laparotomy. Total caudate lobectomy was performed in 2 cases, hepatectomy of segment VII in 1 case, total pericystectomy of segment VIII in 1 case, and right hemihepatectomy in 1 case. Operation time was 225 min (175-300 min); blood loss was 100 mL (50-600 mL); and postoperative hospital stay duration was 10 d (5-19 d). The Clavien-Dindo complication grade was I in 4 cases and II in 1 case. No recurrence of echinococcosis was found in any patient at the 3 mo of follow-up.

Core tip: This study aimed to elucidate the safety and preliminary experience of robotic radical resection of cystic and alveolar echinococcosis in posterosuperior liver segments. Our results demonstrated that robotic transabdominal approach can be an option of treatment and feasible for resection of cystic and selected alveolar echinococcosis located in the posterosuperior hepatic segments.

According to the classification by the WHO Informal Working Group on Echinococcosis[3,4], the treatment methods for hepatic echinococcosis include surgery, medication, and puncture and drainage. Radical resection remains the primary treatment for CE2, CE3, and AE[5]. Since the first laparoscopic pericystectomy for hepatic echinococcosis carried out in France in 1991 by Katkhouda et al[6], there have been increasing reports on the laparoscopic treatment of CE[7-10]. The posterosuperior region of the liver – such as the caudate lobe (segment I), segment VII, and segment VIII – is considered to be the site where difficult lesions reside and remains the most challenging region for complex laparoscopic hepatectomy. Thus, extensive experience in open laparoscopic hepatectomy is imperative[11,12].

The da Vinci Surgical System (Intuitive Surgical Inc., United States) is an advanced and minimally invasive surgery tool, which has been shown to have advantages in complex hepatectomy[13,14]. Since Giulianotti et al[15] reported two cases of robotic hepatic hydatid surgery in 2011, the literature on robotic hepatic hydatid surgery in difficult lesions has mostly been presented in case reports[16]. The aim of this study was to retrospectively analyze the data on robotic surgery for hepatic echinococcosis in difficult lesions from two centers in China and to explore the experience of performing robotic surgery for CE and AE.

A retrospective analysis was conducted of the clinical data of patients with hepatic echinococcosis who underwent robotic surgery at the Second Department of Hepatopancreatobiliary Surgery, The First Medical Center, Chinese People’s Liberation Army General Hospital as well as the Department of Hepatobiliary Surgery, The People’s Hospital of Xinjiang Uygur Autonomous Region, from September to December 2019. The inclusion criteria were: (1) Patients who had pathologically confirmed CE or AE; (2) Patients who had lesions located in the caudate lobe of the liver (segment I), segment VII, and segment VIII; and (3) Patients who underwent total pericystectomy, segmental hepatectomy, or hemihepatectomy. The exclusion criteria were: (1) Patients who had multiple organ echinococcoses; and (2) Patients who could not tolerate anesthesia or surgery.

All patients completed abdominal ultrasound, computed tomography and magnetic resonance imaging examinations (Figure 1) before operation, and multidisciplinary discussion and WHO Informal Working Group on Echinococcosis classification were performed. All patients provided written informed consent. The research was approved by the hospital ethics committee, which complies with medical ethics regulations. All operations were performed by surgeons with vast experience in laparotomy and robotic hepatectomy. 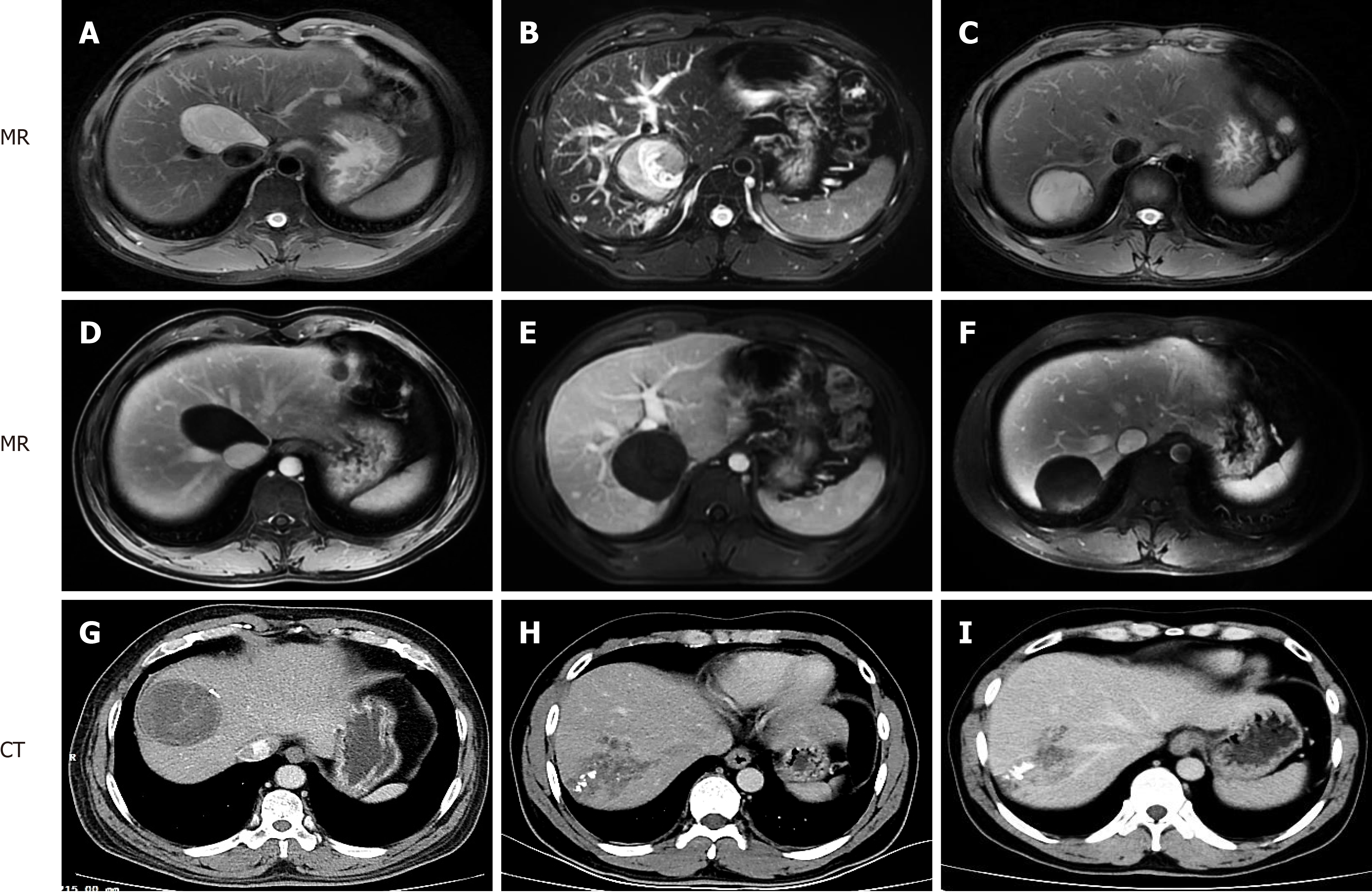 Position and trocar hole layout: Tracheal intubation integrated with intravenous general anesthesia was performed in a 25° reverse Trendelenburg position and a lithotomy position. When resection of segment of VII or VIII was required, the patient was turned 45° to his left side. The CO2 pneumoperitoneum pressure was controlled at 14 mmHg, and the central venous pressure was maintained at 0-5 cm H2O[17]. Robotic procedures were performed using the da Vinci Si or Xi Surgical Systems (Intuitive Surgical Inc., United States).

The drainage tube was routinely placed on the cross section of the liver or through the Winslow hole, which was led out from robotic arm 2. The specimens were taken using the extended assistant port in the midline of the upper abdomen.

All 5 patients successfully underwent robotic radical hepatectomy for hepatic echinococcosis, including total caudate lobectomy (n = 2), hepatectomy of segment VII (n = 1), total pericystectomy of segment VIII (n = 1), and right hemihepatectomy (n = 1), without conversion to laparotomy or perioperative deaths. The median operation time was 225 min (175-300 min); the median blood loss was 100 mL (50-600 mL), with 4 U of red blood cell suspension transfused in 1 patient because of an intraoperative blood loss of 600 mL; the median postoperative hospital stay was 10 d (5-19 d); and the median drainage tube removal time was 10 d (4-16 d). No bile leakage was found in any of the patients. According to the Clavien-Dindo complication grading, there were 4 cases of grade I and 1 case of grade II complications. The case of grade II complications with CE of the caudate lobe had postoperative right hepatic subcapsular hematoma; however, the patient recovered after bed rest and symptomatic treatment (Table 2). No recurrence of echinococcosis was found in any of the patients at 3 mo of follow-up.

Surgery is an important treatment method for hepatic echinococcosis, and the postoperative recurrence rate of hepatic echinococcosis has been reported to be 2%-25%[20]. The surgery for CE includes radical surgery and palliative surgery. In accordance with the report of Georgiou et al[21], the complication rate and 3-year postoperative recurrence rate of radical surgery are 10.95% and 6.9%, respectively, whereas the complication rate of palliative surgery is 24.13%. At present, the preferred radical resection approach for CE includes pericystectomy and segmental or partial hepatectomy[2]. The imaging findings of AE are similar to those of liver malignancies, and AE is associated with a 90% mortality rate in untreated patients. Hepatectomy is the main surgical method for AE, and liver transplantation can be considered as the last resort for end-stage AE[22].

In 2016, Di Benedetto et al[23] reported a case of caudate lobectomy (Spiegel’s lobe) for CE for the first time. The focus diameter was 5.6 cm; the operation time was 280 min; the blood loss was 200 mL; and the postoperative hospital stay was 3 d. To date, robotic total caudate lobectomy alone has not been reported in the literature. During traditional laparoscopic anatomical caudate lobectomy, due to the defects in two-dimensional visual field and endoscopic instruments, the dorsal part of the middle hepatic vein is often poorly exposed, and tearing of the small branches of the paracaval portion and the middle hepatic vein often results in catastrophic hemorrhage, which is difficult to treat under endoscopy[24]. In the present study, lesions in the caudate lobe in 2 cases of CE involved the Spiegel’s lobes, caudate processes, and paracaval portion; the focus diameter was 8 cm; and the hydatid cyst was adjacent to the hepatic vein, inferior vena cava, and hepatic pedicle. We adopted the left approach, completely removed the hydatid cyst from the surface of the hepatic vein, and successfully performed robotic total caudate lobectomy.

In 2011, Casciola et al[25] reported robotic partial hepatectomy of segments I-VIII, including pericystectomy of segment IVa in 1 case and segment VII in 1 case. The study showed that robots had certain advantages in partial hepatectomy in the posterosuperior region of the liver or in cases with the focus adjacent to the hepatic vein. In 2013, Troisi et al[26] also found that compared with laparoscopic hepatectomy, robotic surgery is safe and feasible in hepatectomy for difficult lesions of the posterosuperior region of the liver, and thus, has certain advantages in hepatectomy with the preservation of the liver parenchyma. In the current study, the focus of CE at segment VII was adjacent to the right hepatic vein in 1 case. After the focus was located by ultrasound during the operation, the hydatid cyst and the right hepatic vein were finely detached via the cephalic approach of the right hepatic vein, and segment VII was resected completely. In addition, pericystectomy was successfully performed in 1 case of CE at segment VIII. The operation time in 2 patients were 175 min and 300 min, respectively; the intraoperative blood loss was 100 mL; the postoperative hospital stay was 11 d and 5 d, respectively; and the Clavien-Dindo complication grades were grade I in both.

In 2019, Magistri et al[16] reported the results of robotic surgery in 15 cases of CE from 3 centers in Italy, including resection of the Spiegel’s lobe (as reported by Di Benedetto et al[23]), and other difficult segments. Consequently, we believe that the robot’s video imaging system, which provides a magnified high-definition three-dimensional visual field, can ensure full exposure of the deep space of the caudate lobe, segment VII, and segment VIII. With the advantages of simulating the flexibility of the human wrist, eliminating hand tremor, and providing continuous and stable traction, the robotic arm can assist in the fine separation of hydatid cyst from the hepatic vein and suturing of the hepatic vein hiatus, and reduce uncontrollable hemorrhage.

Radical hepatectomy for AE requires that the normal liver tissues should be more than 1 cm above the edge of the focus, so as to eliminate the active hyperplasia region of the focus. Laparoscopic and robotic hepatectomy for AE, however, has not been reported in the literature. In the present study, robotic right hepatectomy was successfully performed in 1 case of AE involving segment VII and segment VIII. The operation time was 225 min; the blood loss was 200 mL; the postoperative hospital stay was 9 d; and the Clavien-Dindo complication grade was grade I. As such, we believe that robotic hepatectomy is safe and feasible for AE partially confined to the hemiliver or hepatic segment.

In summary, robotic radical surgery for cystic and selected alveolar echinococcosis in difficult liver lesions is safe and feasible.

Radical resection is an important treatment method for hepatic echinococcosis. The posterosuperior segments of the liver remain the most challenging region for laparoscopic or robotic hepatectomy.

The aim of this study was to demonstrate the safety and preliminary experience of robotic radical resection of cystic and alveolar echinococcosis in posterosuperior liver segments.

A retrospective analysis was conducted on the clinical data of patients with hepatic echinococcosis who underwent robotic surgery from September to December 2019.

All 5 patients successfully underwent robotic radical hepatectomy for hepatic echinococcosis, including total caudate lobectomy, hepatectomy of segment VII, total pericystectomy of segment VIII, and right hemihepatectomy, without conversion to laparotomy or perioperative deaths. The operation time was 225 min; the blood loss was 100 mL; and the postoperative hospital stay duration was 10 d. The Clavien-Dindo complication grade was grade I in 4 cases and grade II in 1 case. No recurrence of echinococcosis was found in any of the patients after 3 mo of follow-up.

This study suggested that robotic radical surgery for cystic and selected alveolar echinococcosis in difficult liver lesions is safe and feasible.

Robotic transabdominal approach can be an option for resection of cystic and selected alveolar echinococcosis located in the posterosuperior hepatic segments.