Different types of periampullary diverticulum (PAD) may differentially affect the success of endoscopic retrograde cholangiopancreatography (ERCP) cannulation, but the clinical significance of the two current PAD classifications for cannulation is limited.

To verify the clinical value of our newly proposed PAD classification.

A new PAD classification (Li-Tanaka classification) was proposed at our center. All PAD patients with native papillae who underwent ERCP from January 2012 to December 2017 were classified according to three classification systems, and the effects of various types of PAD on ERCP cannulation were compared.

Among the three PAD classifications, the Li-Tanaka classification has an obvious clinical advantage for ERCP cannulation, and it is helpful for evaluating potentially difficult and successful cannulation cases among different types of PAD patients.

Diverticulum is a common intestinal anatomical variation. A periampullary diverticulum (PAD) is defined as a duodenal depressed lesion of more than 5 mm with an intact mucosa within a radius of 2.5 cm of the major papilla. The clinical discovery rates of PAD vary from 6% to 31.7%[1-3,23], and the prevalence of PAD increases with age. Our previous study[4] found that PAD may increase the incidence of choledocholithiasis and could be a potential risk factor for recurrent choledocholithiasis, especially after cholecystectomy. Previous studies have mainly proposed that PAD may increase the difficulty of endoscopic retrograde cholangiopancreatography (ERCP) cannulation[5]. However, many current studies no longer suggest that PAD significantly increases the difficulty of cannulation[2,6,7]. In clinical practice, we found that the effect of PAD on ERCP cannulation was related to the characteristics of the diverticulum.

Previously, two classifications of PAD based on the characteristics of the diverticulum were used. In 1998, Lobo et al[5] first divided PAD into two types: Intradiverticular papilla (IDP) and juxtapapillary diverticulum (JPD). In 2006, Boix et al[2] identified three types of PAD, and types I and II were further divided into four subtypes. However, the clinical significance of the two current PAD classifications for cannulation is limited. 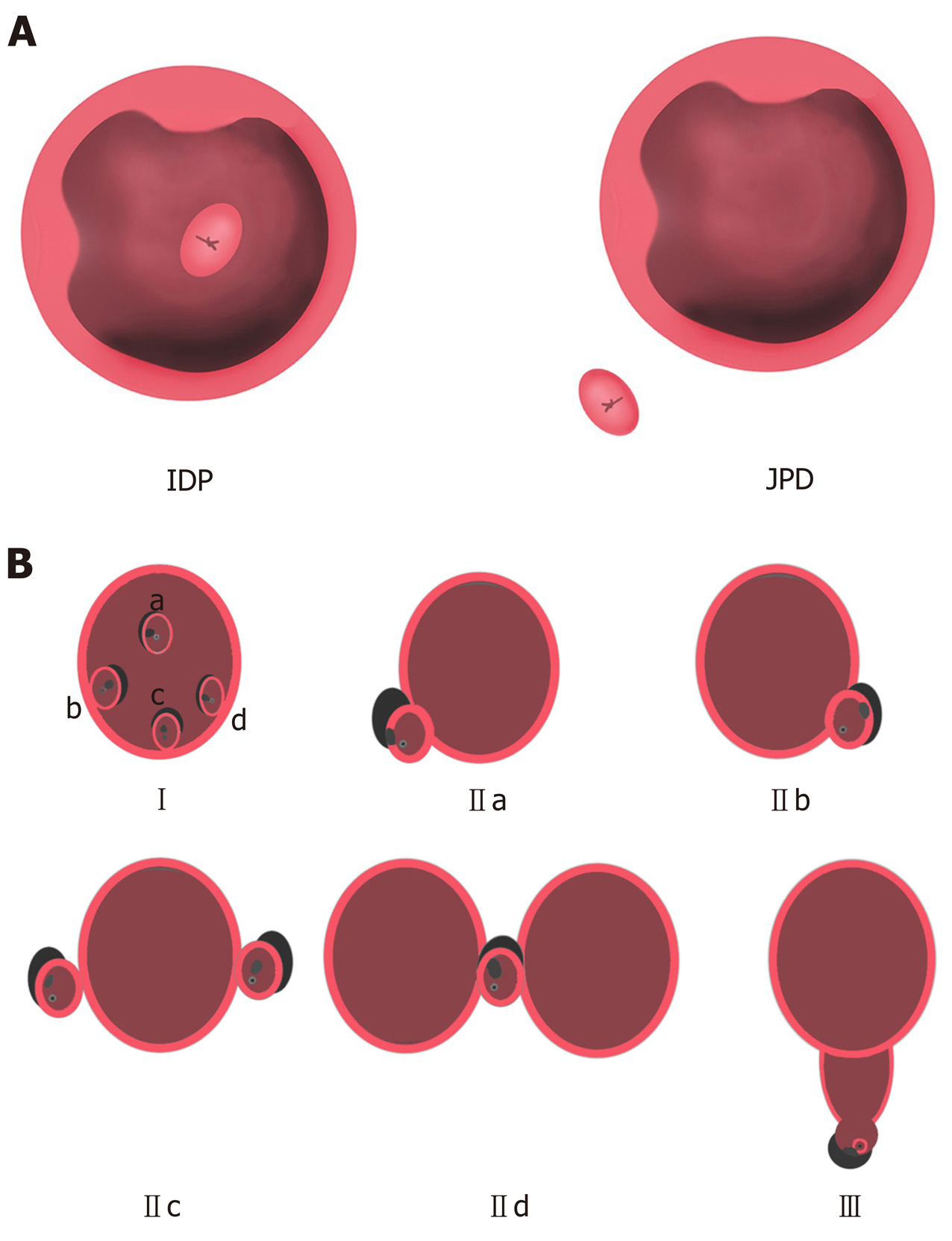 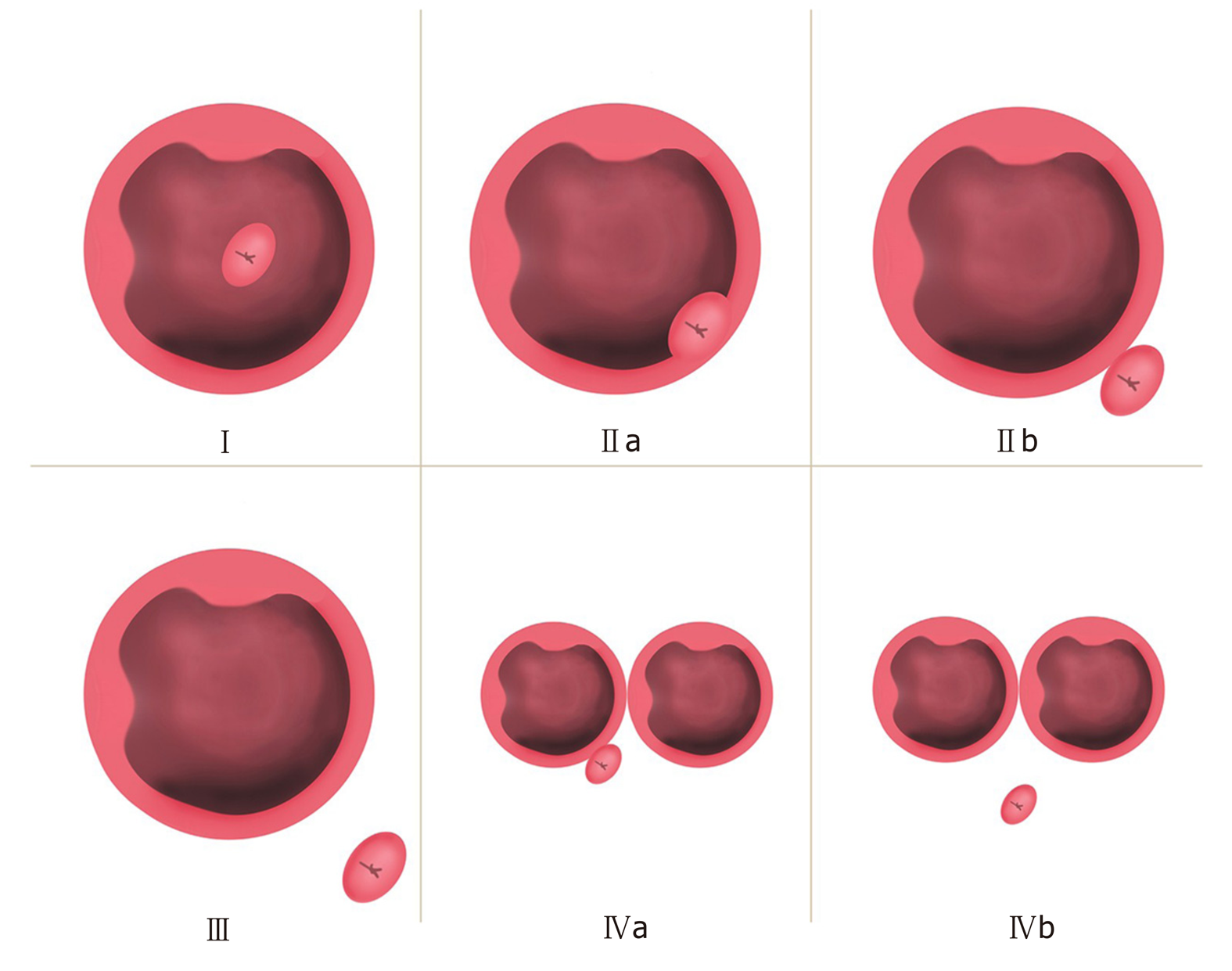 According to the most current international consensus recommendations of the American Society for Gastrointestinal Endoscopy on difficult biliary access in 2017[8], procedures that satisfy one or more of the following conditions are regarded as difficult cannulation: (1) Failure of selective bile duct cannulation by the standard ERCP technique within 10 min; (2) More than 5 cannulation attempts; or (3) Failure to gain access to the major papilla.

A total of 4994 consecutive patients who underwent ERCP from January 2012 to December 2017 at the First Hospital of Lanzhou University were retrospectively analyzed. Written informed consent was obtained from the patients before the procedure, and this study was approved by the institutional ethics committee at our hospital. A total of 1430 cases were excluded based on the following exclusion criteria: Patients with a history of ERCP or Billroth II anastomosis and patients under 18 years of age. These patients were excluded because these factors may directly affect the observation of diverticula and make ERCP cannulation extremely easy or difficult. Ultimately, 3564 patients aged 18 years or above with native papillae were included (Figure 3). 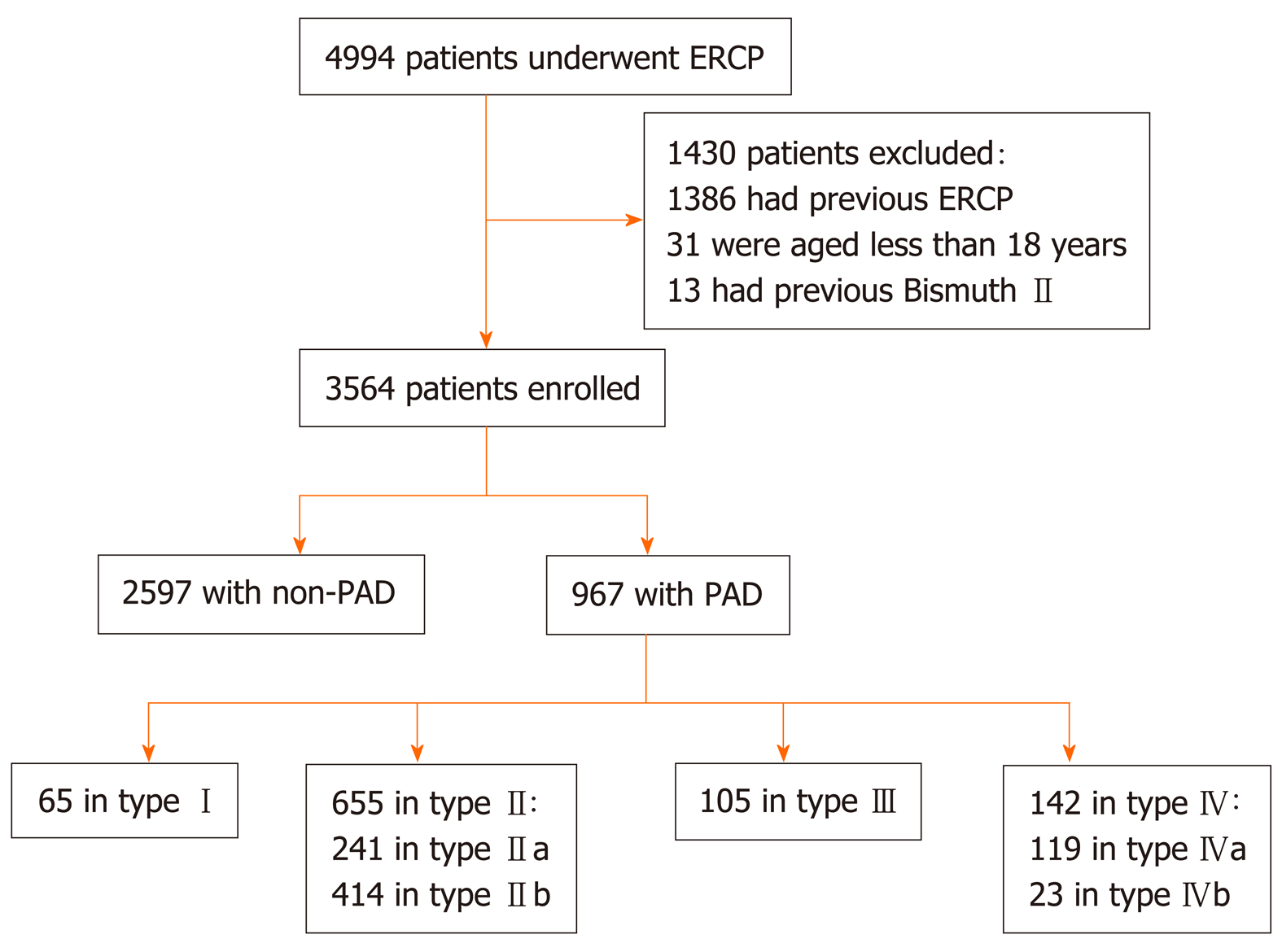 Hepatopancreatobiliary diseases and indications for ERCP were confirmed by laboratory and imaging examinations, including abdominal ultrasound, computed tomography, and magnetic resonance cholangiopancreatography. Patients were placed in the left lateral position before nontracheal intubation and general anesthesia, and a duodenoscope (JF-240, TJF-240, TJF-260 or CV-290, Olympus, Japan) was used to complete the ERCP procedure. The size, number, shape, and specific type of PAD for each classification method were noted before cannulation.

All clinical values are presented as the mean and standard deviation for continuous variables and counts and percentages for dichotomous variables. Global tests for quality were evaluated using analysis of variance (ANOVA), the Kruskal-Wallis test, the Pearson chi-square test, and Fisher’s exact test, as appropriate. For variables in which a significant effect of global test (P < 0.05) was identified, multiple comparisons were performed among the different types of PAD by Bonferroni correction, in which an α of 0.05 was adjusted to 0.017 and 0.008 for three and four groups, respectively. Multivariable-adjusted logistic models were used to estimate the odds ratio (OR) of PAD for difficult and successful cannulation. All models were adjusted for age and sex, and the results are presented as ORs with 95% confidence intervals (CIs). P values less than 0.05 were considered to indicate significance. All analyses were conducted using STATA 14 (Stata Corp, College Station, TX, United States).

In 1998, Lobo et al[5] investigated 100 (8.26%) PAD cases among a total of 1211 cases and found that the cannulation failure rate in the IDP group was higher than that in the JPD group. Similar results were observed for the Lobo classification in our study. IDP in the Lobo classification is equivalent to type I PAD in the Li-Tanaka classification. The difference is that after further subdividing JPD into types II, III, and IV, we found that the success rate was significantly increased only in type II PAD rather than types III and IV PAD compared to non-PAD. In 2006, Boix et al[2] analyzed 131 (32.75%) of 400 PAD patients and found that diverticula did not increase the difficulty of ERCP cannulation. Boix et al[2] proposed a new PAD classification system, but only the proportion of each type was listed, and the influence of the PAD type on cannulation was not examined. Katsinelos et al[13] analyzed 107 PAD cases using this classification method and found no significant difference in the success rates among the three PAD types. Using the Boix classification, in our study, the cannulation success rate in the type II PAD group was higher than that in the non-PAD group. However, it cannot reflect the low success rate of cannulation in IDP. The potential reason is that type I PAD of the Boix classification includes the IDP type and part of the JPD type. As a result, the low successful cannulation rates of IDP were masked.

For the Li-Tanaka classification, the EST rate (75.38%) of type I PAD was lowest, and the EPBD and EST with large balloon dilation (ESLBD) rates were approximately 43.1% and 41.5%, respectively. Some studies[25-27] showed that a small EST followed by EPBD and EPBD alone are both safe and effective methods for PAD patients with cholelithiasis. These techniques do not increase the incidence of adverse events regardless of the PAD subtype. Kim et al[28] found no significant difference between EPBD and EST. Vaira et al[29] found that EST was a safe method in both the PAD and non-PAD groups but that the success rate of EST in the PAD group was lower than that in the non-PAD group. In our study, no significant difference in complications was found among the different PAD types for the 967 PAD cases. Perforation was noted at 72 h after ERCP in one patient with type I PAD, and fully covered self-expandable metal stents were placed. However, the condition could not be improved until surgery was performed. Another case of ERCP-related perforation was found in a type II PAD patient after 24 h; the patient was cured after double biliary stents and one pancreatic duct stent were placed. Because the diameter of type I PAD is larger than that of the other three types and the incision ranges of types I, II, and IV are relatively small, the length and direction of the incision should be strictly controlled to avoid serious adverse events such as perforation[30]. While types III and IVb PADs involve a larger distance between the papilla and diverticulum, the ERCP procedures are similar to those used for non-PAD cases. Some studies have suggested that needle-knife precut fistulotomy is an effective and safe method for difficult cannulation in PAD cases[19]. In addition, most papillae are tilted outwards, which does not increase the risk of EST-related complications[31-33]. Some studies[34,35] have reported that difficult cannulation is a risk factor for PEP. Although type I PAD exhibited the highest rate of difficult cannulation, the incidence of PEP was not significantly different for this group, and PAD is likely a protective factor against PEP. At present, there is no clear theory to explain this phenomenon, which may be due to the existence of PAD resulting in asymmetric relaxation of the sphincter of Oddi. Therefore, cannulation, EPBD, mechanical lithotripsy, and other ERCP procedures have little impact on the pancreatic sphincter.

The proportion of patients with indications for ERCP including acute cholangitis (11.2% vs 17.7%) and common bile duct stones (71.1% vs 85.1%) in the non-PAD group was lower than that of the patients in PAD group. This finding may be related to PAD leading to partial loss of sphincter of Oddi muscle function and an increase in bile duct reflux. The sphincter of Oddi in type I PAD patients may be completely absent after repeated ERCP. In addition, the papilla is located in the diverticulum, which is more likely to cause Lemmel syndrome. Therefore, if acute cholangitis or choledocholithiasis recurs frequently after ERCP is performed more than twice in type I PAD patients, choledochojejunostomy should be considered to reduce the related complications caused by regurgitation. Of course, these findings and recom-mendations require further clinical validation.

Although our study had a much larger sample size than other published studies, some limitations should be noted. First, some PAD patients with biliary and pancreatic diseases could not be included in the study because they chose to undergo surgery rather than receive endoscopic treatment. Second, this study was a retrospective study, and some patients were followed for a short period of time; therefore, comparisons of long-term follow-up data for various types of PAD were not performed.

In conclusion, the Li-Tanaka PAD classification method has obvious clinical significance for ERCP cannulation and is helpful for evaluating difficult and successful cannulation for different types of PAD.

Currently, periampullary diverticulum (PAD) is no longer considered an obstacle to the success of ERCP cannulation in many studies. Different types of PAD may differentially affect the difficulty and success of endoscopic retrograde cholangiopancreatography (ERCP) cannulation; however, the clinical significance of the two existing PAD classifications for cannulation is limited.

The objective of this study was to verify the clinical value of our newly proposed PAD classification.

A novel PAD classification (Li-Tanaka classification) was proposed at our center. All PAD patients with native papillae who underwent ERCP from January 2012 to December 2017 were classified according to three classification systems, and the effects of various types of PAD on ERCP cannulation were compared.

Among the three PAD classifications, the Li-Tanaka classification has an obvious clinical advantage for ERCP cannulation, and it is helpful for evaluating potentially difficult and successful cannulation cases among different types of PAD patients.

Long-term effects of different types of PAD on biliary diseases after ERCP are worthy studying at the subsequent follow-up. What’s more, further prospective studies are needed to determine the clinical guidance value of PAD classification in ERCP cannulation and complications, and what appropriate techniques can be used for different types of PAD with difficult cannulation.

The authors express their gratitude to Ula Nur (Department of Public Health, College of Health Sciences, Qatar University) and Elisabete Weiderpass (International Agency for Research on Cancer) for their scientific analysis and reviewing the statistical analyses performed in this study.