Intraductal papillary neoplasm of the bile duct (IPNB) is a type of tumor that presents in the intra- or extrahepatic bile ducts. Cystic-type intrahepatic IPNB often mimics simple liver cysts, making the diagnosis difficult. Because the growth of IPNB is slow, careful follow-up and timely therapeutic intervention is recommended. There are few reports with a follow-up period longer than a decade; thus, we report the case of a patient with an IPNB that grew for over 13 years.

A 65-year-old man was diagnosed, 13 years prior with a cystic hepatic tumor with abnormal imaging findings. The targeted tumor biopsy results showed no malignancy. Biannual follow-up examinations were performed because of the potential for malignancy. The cystic lesions showed gradual enlargement over 11 years and a 4 mm papillary proliferation appeared on the cyst wall, which is compatible with IPNB. The tumor was observed for another 2 years because of the patient’s wishes. The imaging findings showed enlargement to 8 mm and a new 9 mm papillary proliferation of the cystic tumor. Contrast-enhanced ultrasonography showed hyperenhancement during the arterial phase in both cyst walls, indicating intraductal tumor progression in both tumors. Thus, liver segment 8 subsegmentectomy was performed. The pathological findings indicated that the tumors contained mucin, and high-grade atypia was observed in the papillary lesions, showing IPNB.

The development of IPNB should be monitored in patients with cystic lesions and ultrasonography are useful tool for the evaluation.

Core tip: Cystic lesions in the liver, such as intraductal papillary neoplasms of the bile duct, rarely yield malignant tumors; additionally, the development of a tumor over a decade is hardly ever observed. Here, we present the case of a patient with an intrahepatic intraductal papillary neoplasm of the bile duct that developed over 13 years from a cystic tumor of the liver. The tumor was diagnosed by contrast-enhanced ultrasonography with perfluorobutane and was completely surgically resected. Notably, the intracystic spread of the tumor was well represented by contrast-enhanced ultrasonography.

Intraductal papillary neoplasm of the bile duct (IPNB) is a type of tumor that presents in the common or intrahepatic bile duct and occasionally accompanies mucus production[1]. IPNB shares common characteristics in common with intrapancreatic mucinous neoplasms (IPMNs), which are sometimes malignant[2]. Although the development of IPMNs from pancreatic cysts is well documented because of the high prevalence rate of these neoplasms, there are only a few reports about IPNB development from hepatic cysts. Careful follow-up for IPNB is recommended because complete and timely surgical resection is required if malignancy is suspected[3]. However, little is known about the natural course of IPNB over a long-term period.

The clinical diagnosis of the IPNB is often made by computed tomography (CT) or magnetic resonance imaging (MRI), however, few studies have reported that contrast-enhanced ultrasonography (CEUS) is useful for diagnosing the tumor. Here, we report a case of IPNB that developed in a normal liver over 13 years with follow-up imaging of hepatic cystic hepatic tumors. We could clearly detect papillary lesions and tumor progressions by CEUS and performed successful resection.

A 65-year-old Japanese man was admitted for growing cystic tumors in his liver. Liver cysts were originally found 13 years prior.

Two cystic lesions, located in the right hepatic lobe with diameters of 6 (anterior tumor: Tumor-Ant) and 18 (posterior tumor: Tumor-Post) mm, were detected by primary imaging performed in 2004. Magnetic resonance imaging (MRI) demonstrated simple liver cysts; however, tumor-Post partially contained abnormal lesions (Figure 1). Because ultrasonography of tumor-Post demonstrated hyperechoic lesions, leading to the suspicion of solid tumors, ultrasound-guided histological puncture of tumor-Post was performed, and the result showed normal liver tissue with no malignancy (Supplementary Figure 1). Biannual follow-up examinations were performed, because there is a possibility that the biopsy missed the target and the complex morphology of the cystic tumor had the potential for malignancy.

Figure 1 Magnetic resonance imaging and ultrasonography were performed during the initial visit. A and B: Magnetic resonance imaging shows 2 tumors in the right lobe. Anterior tumor is 6 mm, with low intensity on the T1-weighted image (A) and high intensity on the T2-weighted image (B; white arrow), which is consistent with simple liver cysts. Posterior tumor is 18 mm with mostly T1 low- and T2 high-intensity areas but has partial T1 high- and T2 low-intensity areas (black arrow). C: B-mode ultrasonography of the posterior tumor shows low-echoic cystic lesions with high-echoic areas inside.

In 2015, eleven years after the initial clinical visit, MRI demonstrated a 4 mm papillary lesion on the anterior surface of tumor-Ant for the first time. Tumor-Ant and tumor-Post had enlarged to 14 and 30 mm, respectively. From these findings, we diagnosed the tumor as IPNB and recommended surgical resection to the patient. Although the tumor had a potential for malignancy, the patient hoped to wait and see if the papillary tumor grew. Two years later, in 2017, tumor-Ant had enlarged to 33 mm, and new papillary lesions were present, so the patient underwent a detailed examination. The timeline of tumor proliferation is shown in Figure 2. 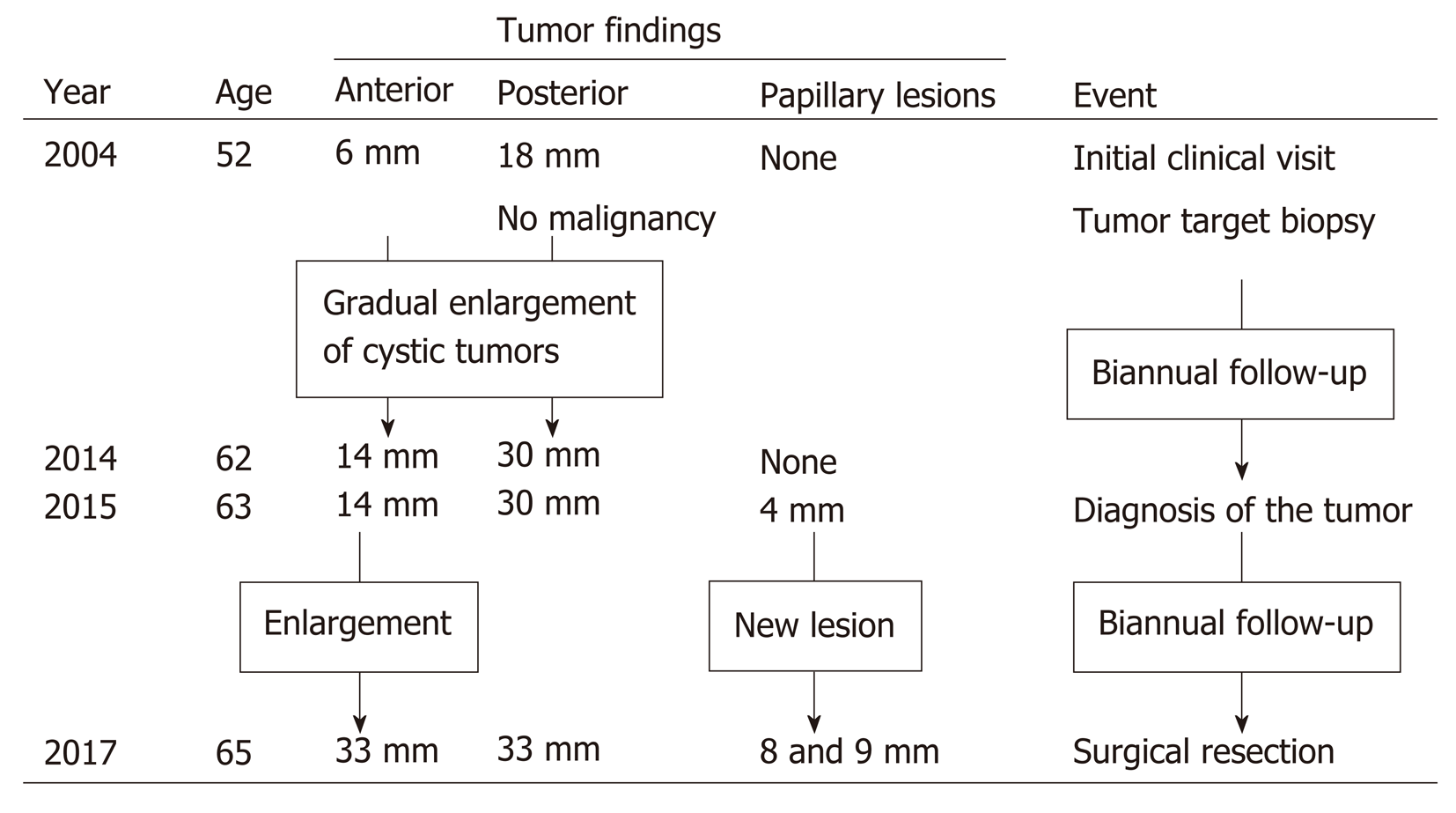 Figure 2 Timeline of tumor proliferation.
History of past illness

The patient had no previous noteworthy medical history.

The patient did not smoke tobacco or consume alcohol. There was no noteworthy family medical history, such as cancer or liver diseases.

The patient’s height and weight were 162 cm and 59 kg, respectively. The patient exhibited a clear sensorium, with a body temperature of 37.0 °C, blood pressure of 120/52 mmHg, and pulse rate of 58 beats/min. The abdomen was soft and flat, with no spontaneous pain or tenderness.

There were no abnormal laboratory data findings, including tumor marker results.

The papillary lesion had grown to 8 mm with another new 9 mm papillary lesion on the posterior surface of tumor-Ant (Figure 3). No significant papillary hyper-enhancement was detected through dynamic CT or MRI studies. 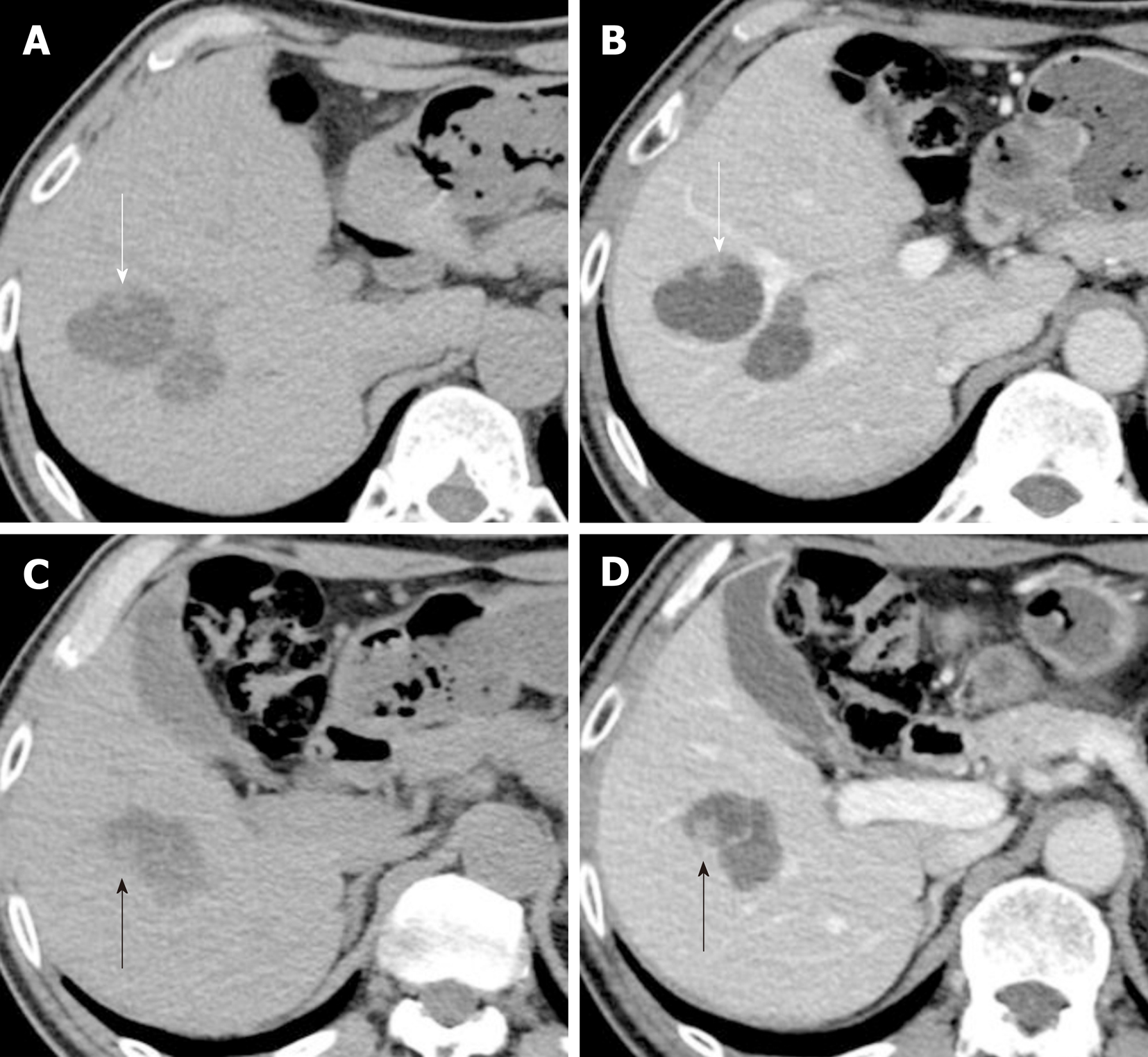 CEUS using perfluorobutane (Sonazoid™; Daiichi-Sankyo, Japan) demonstrated papillary hyperenhancement and marginal hyperenhancement of tumor-Ant during the arterial phase. Moreover, marginal hyperenhancement of tumor-Post was demonstrated on CEUS, which indicated IPNB extension to tumor-Post (Figure 4). Although cystic-type IPNB usually has a connection between bile ducts, we could not detect a connection by magnetic resonance cholangiopancreatography or drip infusion cholecystocholangiography CT. Endoscopic retrograde cholan-giopancreatography was not performed because we could not obtain patient agreement for the procedure. 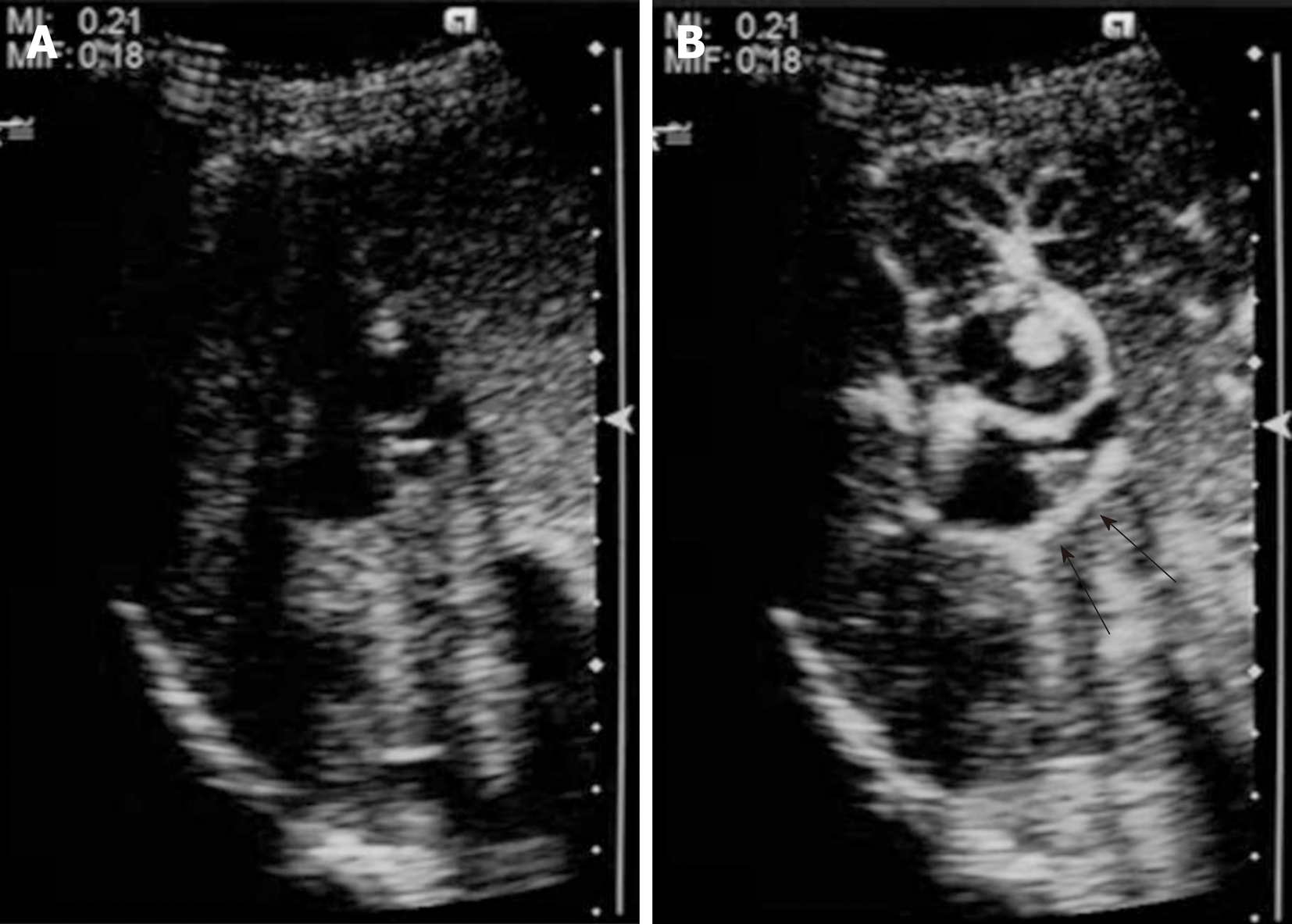 Because the papillary proliferation had grown, which indicated tumor malignancy, liver segment 8 subsegmentectomy was performed after the patient provided informed consent. The surgery procedure resulted in complete tumor resection. Cholangiography during the surgical procedure showed cystic pooling of the contrast media, demonstrating the connection between the bile ducts and cystic tumors (Figure 5) and suggesting that the cystic lesions should be considered IPNB but not mucinous cystic neoplasms. 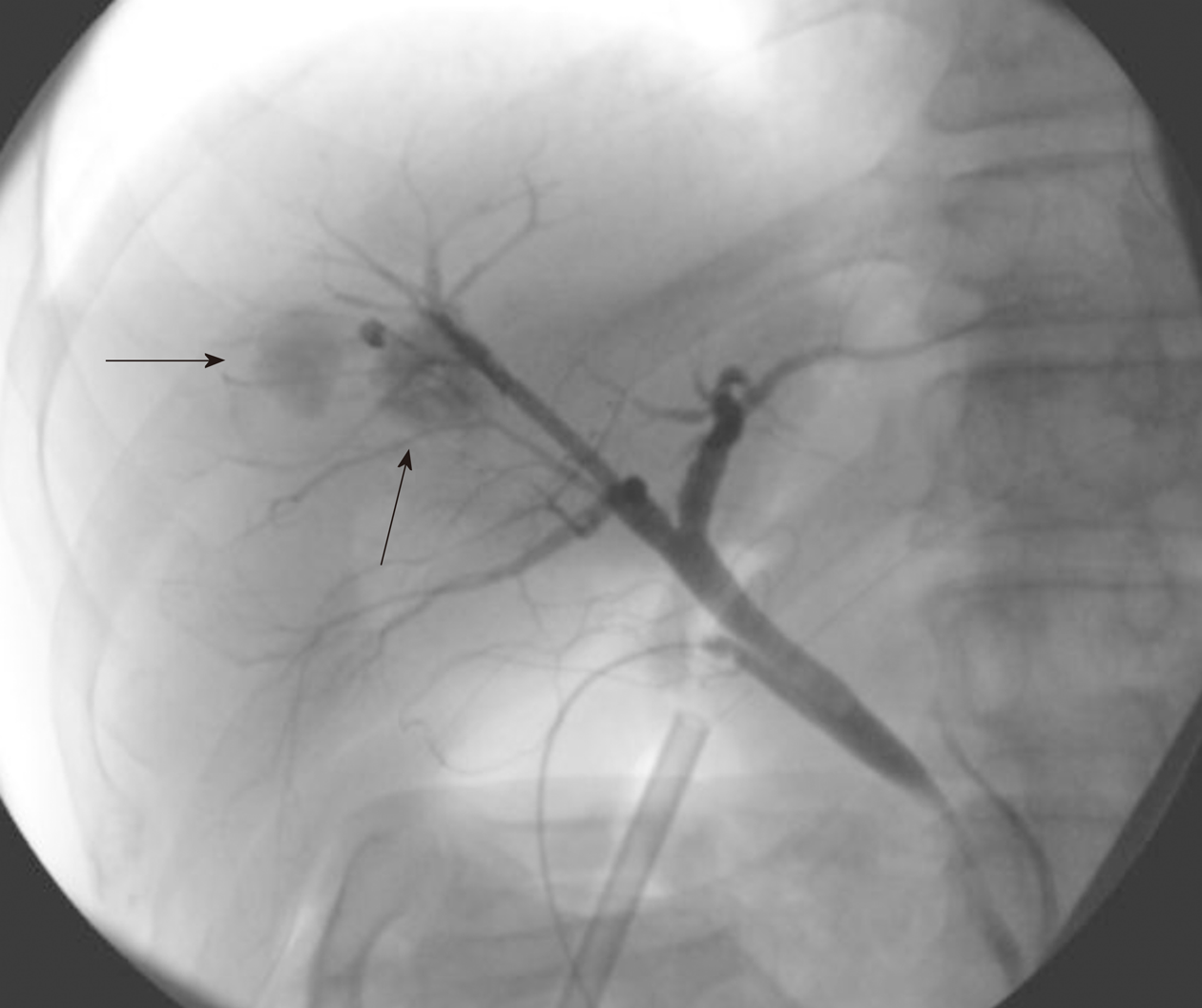 Macroscopically, tumor-Ant contained a mixture of mucin and bile, and tumor-Post contained solidified bile (Figure 6A). Microscopically, papillary proliferation of the gastric epithelium with high-grade nuclear atypia was observed at the posterior surface of tumor-Ant. Both tumor-Ant and tumor-Post showed proliferation of the tumor cells with high-grade dysplasia, which represented an IPNB extension on tumor-Post (Figure 6B). Thick band-like proliferation of the glandular epithelium of the papillary structure was observed on the posterior surface of tumor-Post, which corresponded to the hyperenhancement observed on CEUS (Figure 6C). No stromal invasion was detected. Immunohistochemical analysis demonstrated mucin core protein 5AC (MUC5AC) and MUC6 positivity in most cells. MUC2 was positive in less than 5% of the tumor cells, whereas MUC1 was negative (Figure 6D-G), suggesting that the tumor is gastric type neoplasm. 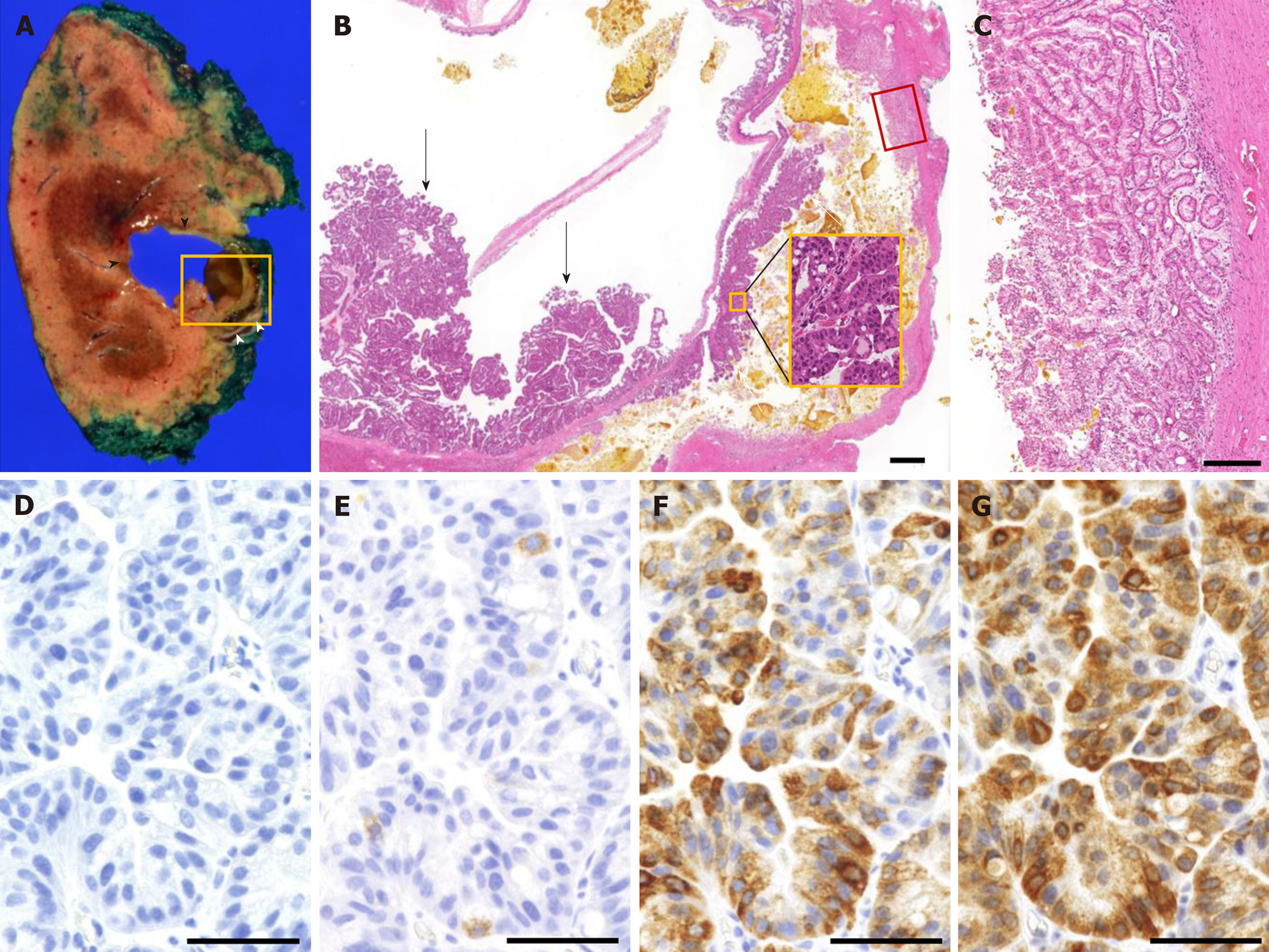 The final diagnosis of the presented neoplasm was cystic type IPNB with no invasion.

The patient was followed up for 25 mo after surgical resection, and there was no recurrence. Biannual follow-up examinations with several imaging modalities, including CT, MRI, and CEUS, are scheduled to be performed.

The diagnosis of a cystic hepatic tumor requires a comprehensive assessment by multiple imaging modalities. Kim et al[12] reported the CT criteria differentiating IPNB from simple hepatic cysts. The criteria included 4 CT findings: coexistence of fewer than 3 other cysts; transient hepatic attenuation differences; upstream bile duct dilatation; and lesion located in the left lobe. In the present case, only the number of cysts met the criteria, indicating that the present IPNB is atypical.

Pathological findings, especially regarding mucus secretion and the im-munohistochemistry of mucin core proteins, have been well-studied in the previous literature. Although most IPMNs have mucus hypersecretion, only 35% of IPNBs have a mucus hypersecretion phenotype[18]. The immunohistochemical results of mucin in IPNB are described as follows: MUC2 expression is common in the intestinal type, MUC6 is common in the gastric type, and MUC5AC is expressed in both of the phenotypes. As the presented case shows gastric epithelium, the MUC staining results are consistent with the phenotype. MUC1 is positive only in malignant IPNBs, such as pancreato-biliary and oncocytic type neoplasms[7,11]. The lack of mucus secretion corresponds with MUC1 positivity and the malignant potential[19]. Downregulation of MUC1 protein expression decreases the metastatic potential of adenocarcinoma[20]. These previous findings support the clinical course of the present case, which progressed slowly and was not highly malignant.

Distinguishing cystic-type IPNB that develops on the small bile ducts from simple hepatic cysts is often difficult because the imaging features of these two neoplasms are similar[21]. We searched the English-language literature published after 2010 for IPNBs developed from cystic hepatic tumors that were followed up for more than one year before treatment. Five cases, including the present case, were treated by surgical resection (Table 1)[9,22-24]. The follow-up period ranged from 2.5 to 13 years, and 4 patients showed gradual enlargement of the cystic tumor, initially without any clinical symptoms. Two patients developed clinical symptoms, but the other 3 did not, which indicates that most IPNBs show slow, asymptomatic progression. All patients were from East Asia: 4 were from Japan, and 1 was from South Korea. Tan et al[11] reviewed previous studies of 354 IPNB patients, among whom, 52.8% were from Japan, and 19.5% were from Eastern countries, including China, South Korea and Taiwan, which indicates that IPNBs occur more commonly in the East Asian population than in other populations. There was no previous literature which could detect the tumor progression from the main lesion to other cysts or bile ducts using CEUS. The present case shows that even if the tumor is followed for over a decade, periodic imaging surveillance is necessary. CEUS is an effective imaging method which can detect the detailed features of IPNB.

We encountered a patient with an IPNB that developed over 13 years, who had no recurrence for 25 mo after the complete surgical resection. The present case suggests that IPNB slowly and asymptomatically develops for a long time. Thus, periodical imaging surveillance is needed for cystic hepatic tumors even if the tumor seems benign. CEUS is a useful inspection tool for evaluating the tumor progression of cystic lesions.