Non-alcoholic fatty liver disease (NAFLD) is a common chronic liver disease worldwide. However, to date, there is no ideal therapy for this disease.

To study the effects of Si-Ni-San freeze-dried powder on high fat diet-induced NAFLD in mice.

The beneficial effects of Si-Ni-San freeze-dried powder on high fat diet-induced NAFLD in mice may be associated with its anti-inflammatory and changing intestinal microbiota effects.

Nonalcoholic fatty liver disease (NAFLD) is a condition of excess fat accumulation in the liver without significant alcohol consumption, and it consists of liver damage, ranging from steatosis to steatohepatitis, advanced fibrosis and cirrhosis. Obesity, hypertriglyceridemia, hyperglycemia, and type 2 diabetes are the best-known risk factors for NAFLD[1,2]. Besides these risk factors, plus-size clothing and sleep shortage may also be associated with NAFLD[3].

Over recent decades, we have witnessed a markedly increasing incidence of NAFLD, and it has become one of the most common chronic liver diseases worldwide[4,5]. In the United States, the proportion of patients with this chronic liver diseases rose from 47%-75%[6]. With the prevalent use of hepatitis vaccine and unchanged lifestyle, we can foresee that this proportion will continue to rise in the future. Nonalcoholic steatohepatitis (NASH), a more severe form of NAFLD, can lead to cirrhosis, liver failure, hepatocellular carcinoma and liver-related death[7-9]. In addition, NAFLD is a risk factor for cardiovascular diseases, diabetes and chronic kidney disease, and it also causes a high level of non-liver-related mortality[10,11]. Although NAFLD poses a threat to human health, the exact pathogenesis of this disease remains unclear. Moreover, until now, there are no approved medications for NAFLD treatment. Despite guidelines[12,13] recommending lifestyle modification as the first line treatment for NAFLD, compliance is a challenge. Therefore, it is important to look for new drug therapies.

Si-Ni-San, first recorded by Zhong-Jing Zhang during the Eastern Han Dynasty, is a famous prescription of traditional Chinese medicine to coordinate the functions of liver and spleen, and it has been used in China for thousands of years. This prescription consists of four herbal medicines: Bupleuri Radix, Paeoniae Alba Radix, Aurantii Immaturus Fructus, and Honey-fried Licorice Root in equal proportions. Si-Ni-San can alleviate liver injury through protecting hepatocyte membranes, increasing NO release and facilitating apoptosis of liver-infiltrating cells[14], and modified Si-Ni-San also has hepatoprotective effects[15]. Moreover, glycyrrhizin[16] and paeoniflorin[17], two components of Si-Ni-San, have shown beneficial effects on NAFLD. Therefore, we hypothesize that Si-Ni-San may have some beneficial effects against NAFLD.

The purpose of the present study was to preliminarily investigate the therapeutic effect of Si-Ni-San freeze-dried powder on high fat diet-induced NAFLD in a mouse model, and its effect on the composition and function of the intestinal microbiota, which will provide us with a deeper understanding of the therapeutic mechanism of Si-Ni-San freeze-dried powder.

Bupleuri Radix, Paeoniae Alba Radix, Aurantii Immaturus Fructus, and Honey-fried Licorice Root were purchased from Beijing Tongrentang (Beijing, China) and were authenticated by our team. The herbs were mixed at a mass ratio of 1:1:1:1, and the mixture (2000 g) was decocted with distilled water and then filtered. The filtrate was prepared by freeze-drying, and five major constituents in the freeze-dried powder were quantified by HPLC (Table 1).

Twenty-four male 5-wk-old C57BL/6 mice (Beijing Vital River Laboratory Animal Technology Co. Ltd., Beijing, China) were acclimated for 1 wk at a temperature of 20-22 °C and humidity of 40%-45% in controlled rooms with an alternating 12-h light and dark cycle. After acclimation, mice were randomized into three groups of eight. The control group (CON) was allowed ad libitum access to a normal chow diet for 12 wk. The high fat diet group (FAT) and Si-Ni-San group (SNS) were allowed ad libitum access to a high fat diet for 12 wk. The composition of normal chow diet and high fat diet are shown in Table 2. SNS group mice were intragastrically administered Si-Ni-San freeze-dried powder (5.0 g/kg) once daily. The CON and FAT groups were intragastrically administered distilled water once daily. The study was approved by the Animal Ethics Committee of Hebei North University (No. 2016-1-0-06).

When the mice were killed, blood samples were collected via cardiac puncture and centrifuged. Serum alanine aminotransferase (ALT) was measured by standard procedures. One milliliter of portal blood was collected for analysis by lipopolysaccharide (LPS) assay. The level of portal LPS was measured using a chromogenic limulus amoebocyte lysate test kit (Bokang, Zhanjiang, China) according to the manufacturer’s instructions.

QIIME pipeline (1.9.1) was used to process and analyze the raw data[31]. The main scripts used in our study were as follows: join_paired_ends.py, split_lib-raries_fastq.py, pick_open_reference_otus.py and core_diversity_analyses.py. Operational taxonomic units (OTUs) were clustered at 97% similarity, and sequences were taxonomically assigned against the Greengenes database (gg_13_8). The results of α diversity, β diversity and bacterial taxonomy were generated by core_diver-sity_analyses.py script. We used the linear discriminant analysis (LDA) effect size (LEfSe) method to identify bacterial biomarkers in different groups[32]. We predicted the bacterial functions of different groups. For functional prediction, we reclustered sequences into OTUs (97% similarity) against the Greengenes database (gg_13_5) using pick_closed_reference_otus.py script, and then the PICRUSt pipeline[33] was used to predict bacterial functions. After using the norma-lize_by_copy_number.py script, the predict_metagenomes.py script was used to generate Kyoto Encyclopedia of Genes and Genomes (KEGG) ortholog predictions. We also applied the LEfSe method to find functional biomarkers in different groups.

Data are presented as mean ± SD. The differences in data were statistically analyzed by one-way analysis of variance with Bonferroni’s multiple-comparison test as post hoc analysis. SPSS version 20.0 was used for statistical analysis, and P < 0.05 was considered statistically significant. 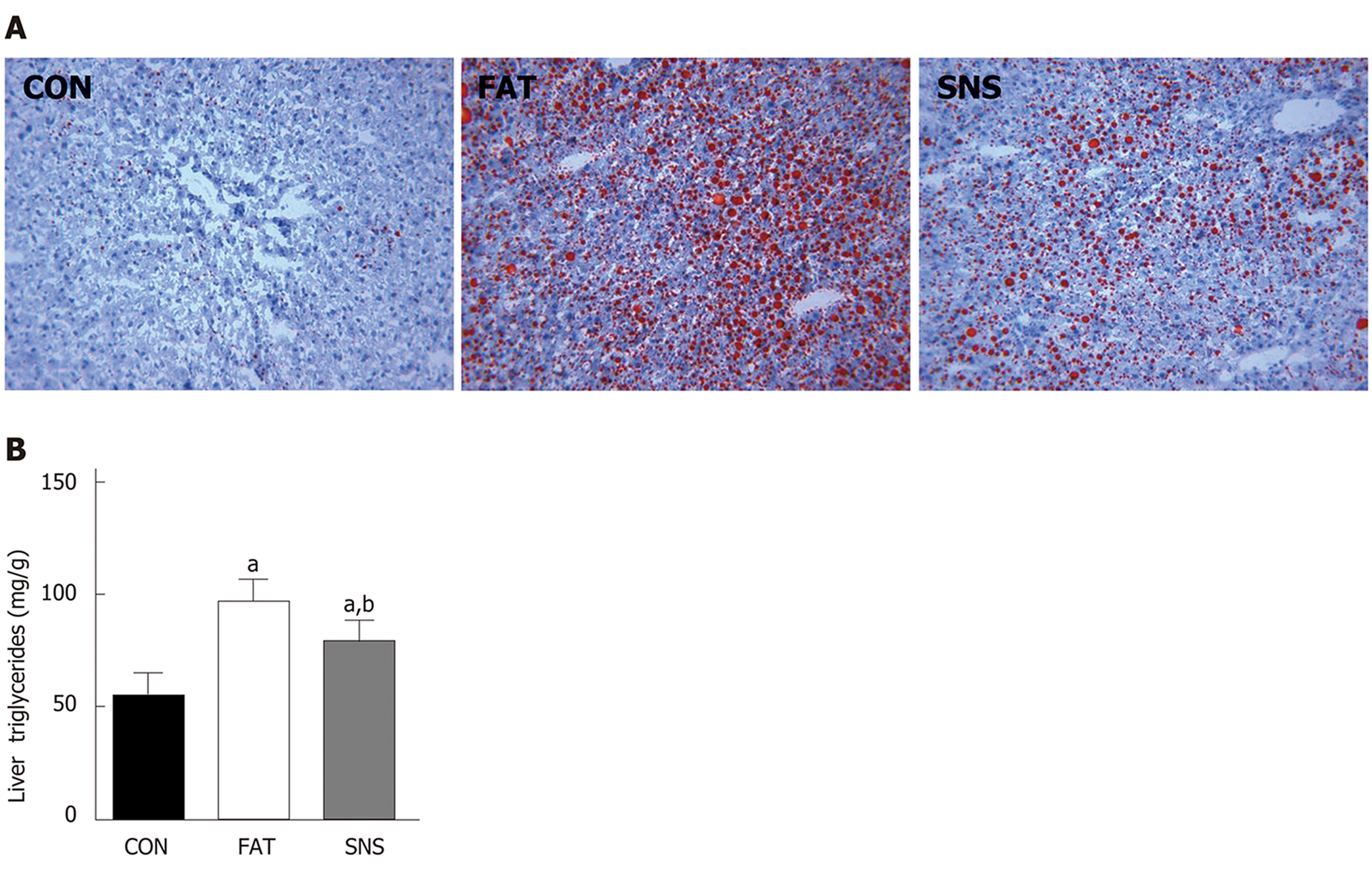 A total of 1,380,651 high-quality reads (average of 57,527 ± 14,266 sequences per sample) were used for biological information analysis, and 15,253 OTUs were clustered at 97% similarity (Figure 4A). Good coverage, which was > 0.96, and the rarefaction curves of all samples indicated that we obtained sufficient OTUs to reflect the bacterial composition of different samples accurately (Figure 4B). Although we calculated the values of Shannon Index and Chao 1, the three groups of mice showed no significant differences (date not shown). To observe the β diversity of different groups of mice, we used Unweighted UniFrac PCoA, and the result of this evolutionary distance-based method showed that the intestinal microbiota of the CON group was obviously separated from that of the FAT and SNS groups (Figure 4C). Despite partially overlapping, the intestinal microbiota of the FAT and SNS groups were roughly separated (Figure 4C). Analysis of molecular variance was used to further assess the spatial separation, and revealed that samples from the three groups differed significantly (CON vs FAT group, P < 0.001; FAT vs SNS group, P < 0.001; CON vs SNS group, P < 0.001). 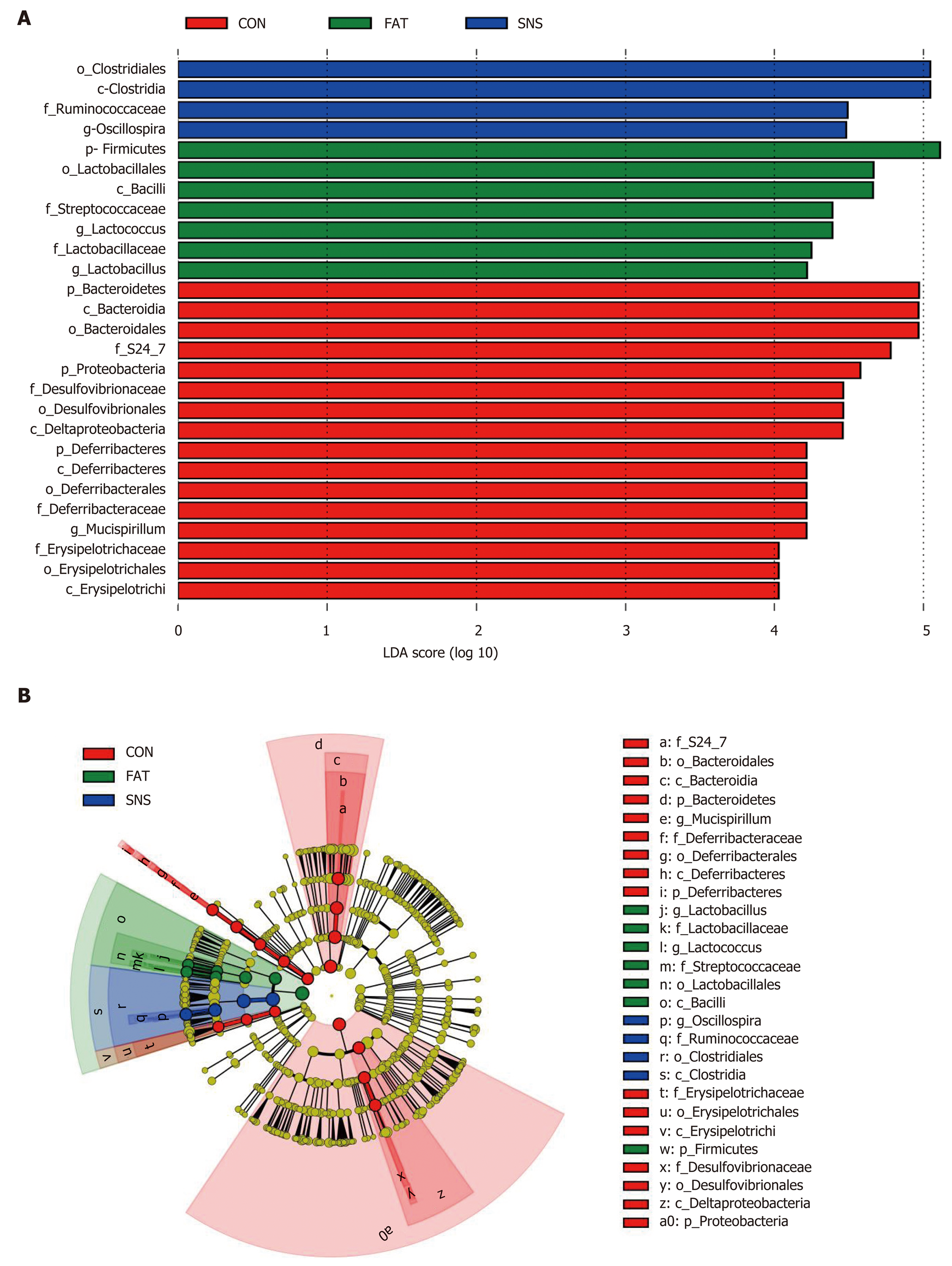 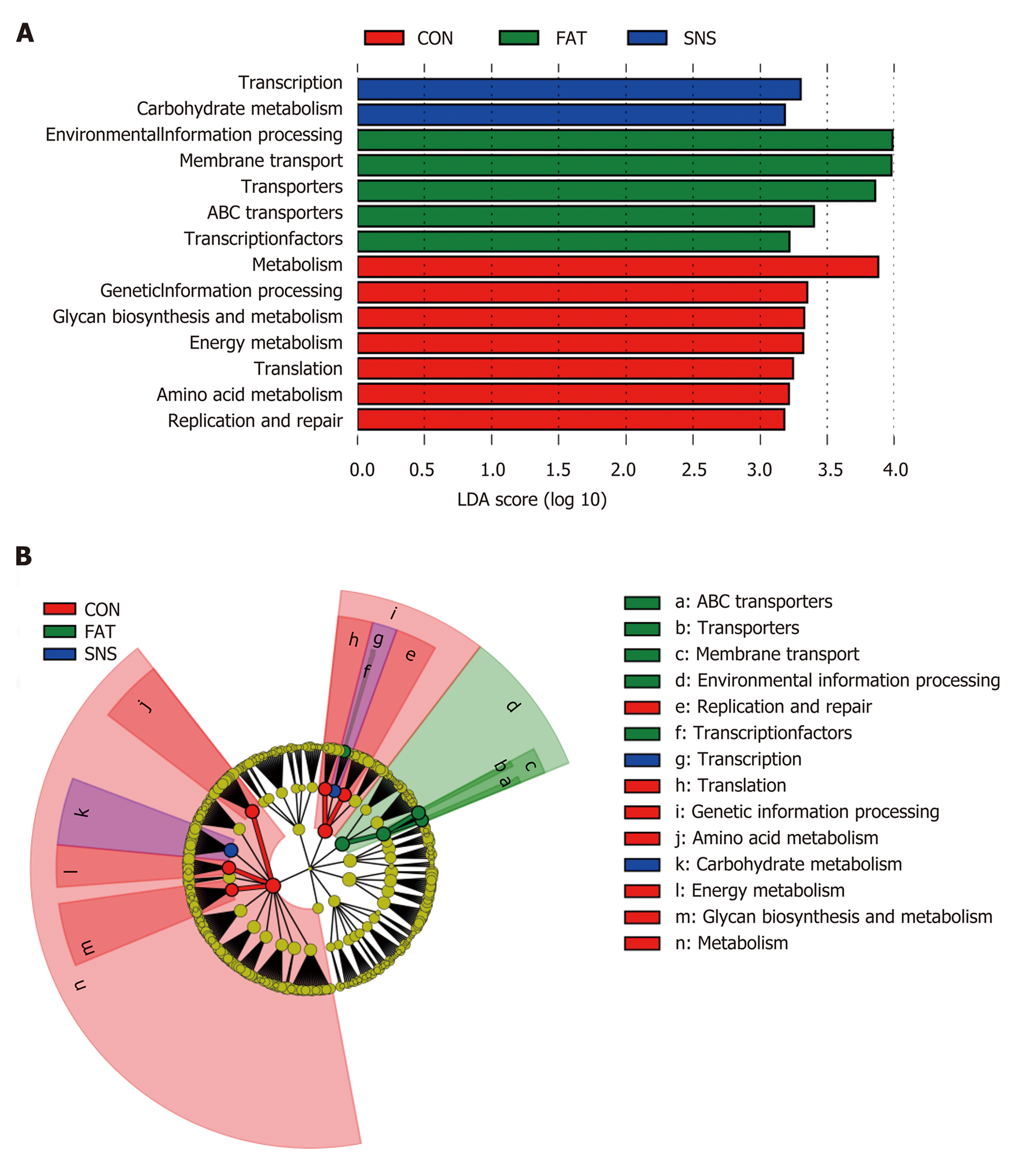 Previous research has studied the effects of Si-Ni-San on NAFLD, and found that Si-Ni-San can reduce the liver concentration of total cholesterol, triglyceride, free fatty acid and interleukin (IL)-6 in rats with NAFLD[34]. However, animal models of NAFLD, in this research, were induced using a long-term chronic stress method that is not widely used in NAFLD studies. In addition, this method caused a decrease in body weight compared with control rats, which does not match the real-life situation. In the present study, we adopted a high fat diet to induce animal models of NAFLD, which is a stable and widely used method in NAFLD studies. This method always induces obesity, insulin resistance, dyslipidemia and liver triglyceride accumulation, which more accurately reflect real-life situations. Thus, our present study has a wider practical significance.

Previous studies have revealed the key role of LPS, a constituent of Gram-negative bacteria and main constituent of endotoxemia, in the development of metabolic diseases, and elevated LPS has been observed in patients with NAFLD[25,38]. LPS is an inflammatory trigger, and it can promote the secretion of proinflammatory cytokines, such as tumor necrosis factor (TNF)-α, IL-1 and IL-6. In the present study, we found that high fat diet increased the levels of portal LPS and liver TNF-α compared with normal chow diet; however, Si-Ni-San freeze-dried powder reduced these increases, suggesting that the anti-inflammatory effect of Si-Ni-San freeze-dried powder may be a mechanism underlying its beneficial effect. Although the portal LPS of the CON and SNS groups did not differ significantly, the SNS group only exhibited higher levels of liver TNF-α and ALT, suggesting that in addition to LPS, there may be other proinflammatory factors.

An interesting finding in our study was that Lactobacillus genus was a bacterial biomarker of the FAT group. Some strains of Lactobacillus are frequently used as probiotics[52]. Thus, our finding needs confirmation by further studies.

The incidence of nonalcoholic fatty liver disease (NAFLD) dramatically increased in the last few decades. Unfortunately, until now, the clinical treatment of this common chronic liver disease is difficult, and some new effective therapies are needed.

Some herbal medicines have hepatoprotective effects, so we want to know if some famous prescriptions of traditional Chinese medicine can provide beneficial effects on NAFLD.

To explore the effects of Si-Ni-San, a famous prescription of traditional Chinese medicine, on NAFLD and intestinal microbiota.

We intragastrically administered Si-Ni-San freeze-dried powder (5.0 g/kg) to mice, which were allowed ad libitum access to a high fat diet. After 12 wk of treatment, we measured body weight, liver index, visceral fat index, serum alanine aminotransferase (ALT), portal lipopolysaccharide (LPS), liver tumor necrosis factor (TNF)-α, liver triglycerides and intestinal microbiota, and we compared the results of these parameters with mice in another group to find whether Si-Ni-San freeze-dried powder have some beneficial effects on NAFLD.