To detect the expression of type I inositol 1,4,5-trisphosphate receptor (IP3RI) in the kidney of rats with hepatorenal syndrome (HRS).

IP3RI protein expression is increased in the kidney of HRS rats, and may be regulated at the transcriptional level.

Core tip: Type I inositol 1,4,5-trisphosphate receptor (IP3RI) protein expression is increased in the kidney of hepatorenal syndrome (HRS) rats, and IP3RI protein expression may be regulated at the transcriptional level. Increased expression of IP3RI may be closely associated with HRS development and progression through excessive renal vascular contraction resulting in insufficient renal blood perfusion.

Hepatorenal syndrome (HRS), one of the most severe complications of liver failure (LF) and the leading cause of death in LF[1], is functional renal failure secondary to LF[2-10]. At present, the exact pathogenesis of HRS is still unclear, and the reduction in renal blood flow induced by renal vasoconstriction is considered to play a central role in the development of HRS[11,12]. Renal blood flow is regulated by the contraction and relaxation of vascular smooth muscle cells (VSMCs) of glomerular afferent arteries and glomerular mesangial cells (GMCs), while the contraction and relaxation of VSMCs and GMCs are regulated by intracellular Ca2+ concentrations[13,14]. GMCs are in direct contact with glomerular endothelial cells. When GMCs contract, glomerular mesangial volume decreases by 20%-25%, glomerular capillary plexuses are reduced, and the area for glomerular filtration is reduced. Inositol 1,4,5-trisphosphate (IP3) receptor (IP3RS) is the main Ca2+ release channel in cells. IP3 is an intercellular second messenger mediating transmembrane signal transmission. When binding to IP3RS, IP3 mediates intracellular calcium release and extracellular calcium influx[15,16]. VSMCs and GMCs transmit extracellular signals into the cell via the IP3-IP3R pathway, increasing intracellular Ca2+ concentrations[17,18]. Is high expression of renal IP3RS associated with HRS? To answer this question, in the present study we detected the expression of IP3RI protein and mRNA in the kidney of HRS rats to determine the relationship between IP3RI expression and HRS.

Specific pathogen-free (SPF) Sprague-Dawley (SD) rats, weighing 220 g ± 20 g, were purchased from the Laboratory Animal Center of the Academy of Military Medical Sciences (Animal Certificate No. SCXK-2017-004; Beijing, China). Prior to experimentation, the rats were reared in separate cages at 23 °C ± 3 °C under a 12 h/12 h light/dark cycle, with free access to ordinary chow (purchased from the Laboratory Animal Center of China Medical University, Shenyang, China) and water. After one week of adaptation, the rats were used in the experiments.

One hundred and twenty-five SD rats of SPF grade, weighing 220 ± 20 g, were randomly divided into four groups to receive an intravenous injection of D-GalN plus LPS (group G/L), D-GalN alone (group G), LPS alone (group L), and normal saline (group NS), respectively. Each group was further divided into five subgroups for testing at different time points (3, 6, 9, 12, and 24 h). Group G/L contained ten rats at each time point, and the other groups contained five rats at each time point. The rats were weighed and then injected with D-GalN (400 mg/kg body weight) and/or LPS (32 μg/kg) or NS (2 mL/kg) via the tail vein. Rats that died during the modeling process were excluded from the study. At 3, 6, 9, 12, and 24 h after modeling, the rats in groups G/L, G, and L were anesthetized with 0.8% pentobarbital sodium at 40 mg/kg via intraperitoneal injection and sacrificed to obtain liver and kidney tissues. A section of each tissue was fixed in formalin, and the remainder was preserved at -80 °C for Western blot and real-time PCR analysis of IP3RI protein and mRNA expression, respectively.

After total protein concentration was determined using the bicinchoninic acid (BCA) method, the protein samples were mixed with 5 × loading buffer at a ratio of 4:1 (v/v), boiled for 5 min, resolved by 8% SDS-polyacrylamide gel electrophoresis, and transferred to polyvinylidene difluoride membranes. The membranes were then blocked with 5% skimmed milk, Tris-buffered saline and Tween-20, and incubated with primary antibody against IP3RI (dilution, 1:1000) at 4 °C overnight. This was followed by incubation with horseradish peroxidase (HRP)-conjugated goat anti-rabbit secondary antibody (dilution, 1:3000) for 2 h at room temperature. The immunoblots were visualized using an enhanced chemiluminescence system. The molecular weight of the target band was 230 kDa. β-actin (45 kDa) was used as an internal control. Digital imaging software was used for densitometry analyses, and the relative IP3RI level was calculated as IP3RI grey value divided by β-actin grey value.

RESULTS
Successful induction of HRS in rats with D-GalN/LPS 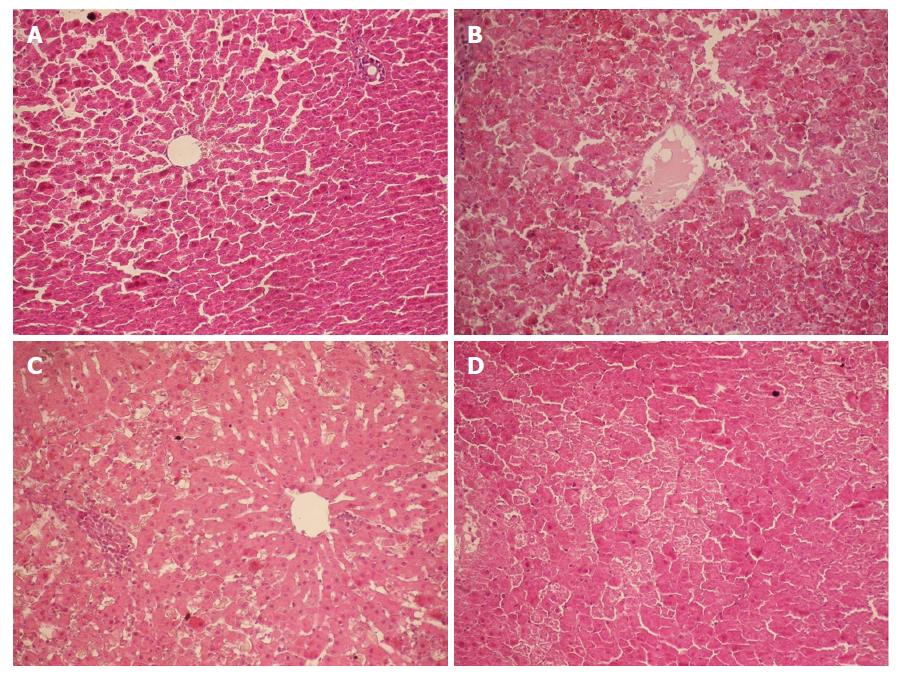 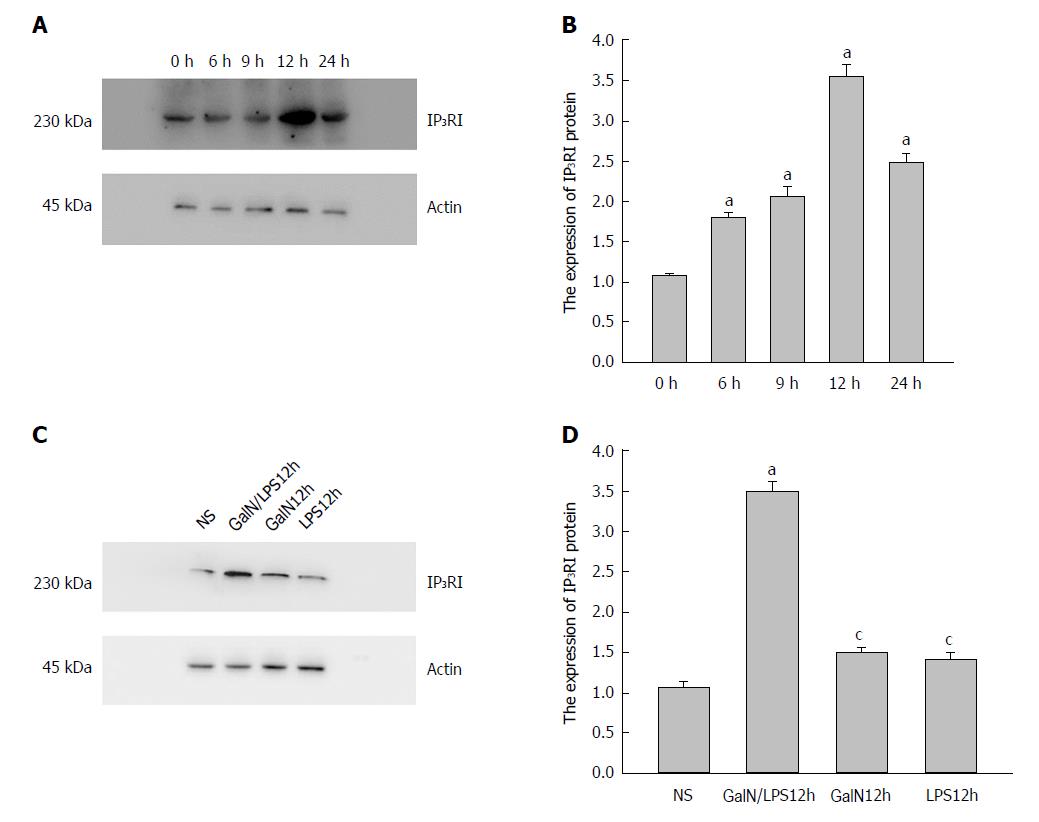 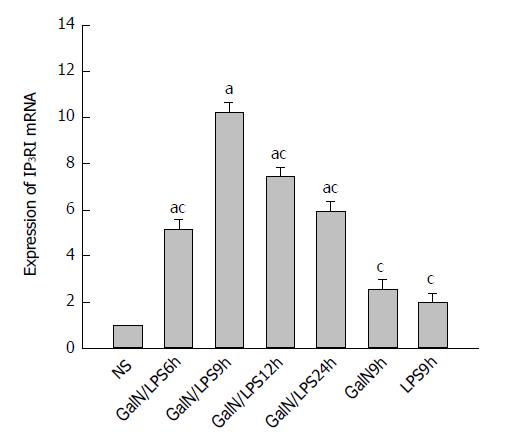 HRS is one of the most common and severe complications of fulminant liver failure (FHF) and an advanced liver disease, with approximately 55% of FHF patients developing HRS[19,20]. The pathogenesis of HRS is still not completely clear, although it is believed to be associated with excessive renal vascular contraction, insufficient renal blood perfusion, sympathetic nervous system activation, and increased synthesis of vasoactive substances, all of which make the kidneys more sensitive to low perfusion[21,22]. Renal blood flow and GFR decrease significantly in HRS due to renal vasoconstriction, and many factors are involved in this process. A significant increase in vasocontracting factors [e.g., endothelin (ET) and angiotensin II] in the blood not only leads to renal vascular contraction, but also decreases the glomerular filtration coefficient (Kf) and GFR[23,24]. The contraction of VSMCs results in reduced renal blood flow, while GMC contraction reduces the glomerular filtration fraction and coefficient. As both VSMCs and GMCs are extremely sensitive to vasoactive substances, GFR is significantly decreased in HRS. ET and angiotensin II are important renal vasocontracting factors, and they activate Ca2+ channels via the IP3-IP3Rs pathway. IP3Rs is the intracellular calcium reservoir, which is present mainly in the endoplasmic reticulum and on the membrane, directly or indirectly mediating the calcium influx[25-27]. In addition, IP3Rs is also present in the nucleus, participating in nuclear calcium release and regulating gene expression[28,29]. When IP3 binds to IP3Rs, a conformational change in IP3Rs occurs, the calcium channel is open, and the calcium reserve in the endoplasmic reticulum is released into the cytoplasm. As a result, cytoplasmic free Ca2+ concentration ([Ca2+]i) increases, thus causing cell contraction[30-32]. Therefore, IP3Rs mediates an important Ca2+ signaling pathway in the cell, and the expression of IP3Rs is closely related to the sensitivity of the kidney to vasoconstrictors[33-35]. IP3Rs has four types of ligand binding sites associated with calcium channels[36-39], and renal IP3RI is mainly found in GMCs and VSMCs, and there is almost no IP3RI on the surface of other renal cells[40,41]. Therefore, the expression levels of IP3RI in renal GMCs and VSMCs may be related to renal vasoconstriction. As the opening of IP3-IP3Rs channels can increase intracellular [Ca2+]i, theoretically the expression level of IP3RI is closely related to the intracellular [Ca2+]i level. Wang et al observed increased expression of IP3RI in the glomerular capillary loops and anterior artery of rats with liver cirrhosis by immunohistochemistry. However, it is unknown whether the expression of IP3RI increases in FHF. To answer this question, we detected IP3RI expression in the renal tissue of a rat model of FHF at different time points at both the protein and mRNA levels using Western blot and real-time quantitative PCR, respectively.

In order to understand whether IP3RI protein expression in the kidney is regulated at the transcriptional level, real-time quantitative PCR was performed. The fluorescent dye SYBR Green I[44,45] added to the PCR reaction system can be incorporated into double-stranded DNA with PCR amplification and markedly enhance fluorescence[46-48]. The relative expression levels of these two parameters were calculated by the housekeeping gene GAPDH. It was found that the relative expression of IP3RI mRNA to GAPDH mRNA began to rise 3 h after D-GalN and LPS administration, but the protein level did not rise at this time point. At 9 h, the expression level of IP3RI mRNA reached the highest level. Although the protein level was also high at this time point, it was lower than that at 12 h. The expression of IP3RI mRNA began to decrease, but it was still significantly higher than that in the control group. These changes can be explained from two aspects. On the one hand, IP3RI mRNA expression may be prior to protein expression, which is associated not only with the translation efficiency and the speed of mRNA degradation, but also with the rate of protein degradation. On the other hand, the protein synthesis process also includes the assembly and translocation of proteins in ribosomes, which may affect the final expression of IP3RI protein.

Hepatorenal syndrome (HRS) is one of the common and severe complications of liver failure and advanced liver disease, with approximately 55% of these patients developing this severe complication. At present, HRS has unclear pathogenesis, limited treatment options, and poor therapeutic efficacy. Once renal dysfunction aggravates rapidly, 60%-80% of patients with HRS will die. Therefore, elucidating the mechanism underlying the development and progression of HRS and taking effective preventive and therapeutic measures may improve the success rate of rescue, the incidence rate, and the mortality rate of HRS.

To detect the protein and mRNA expression of type I inositol 1,4,5-trisphosphate receptor (IP3RI) in the kidney of rats with HRS by Western blot and real-time PCR.

To explore whether high expression of renal IP3RI is associated with Ca2+ influx in vascular smooth muscle cells of glomerular afferent arteries and glomerular mesangial cells in rats with HRS.

D-galactosamine (D-GalN) and/or lipopolysaccharide (LPS) were used to treat male Sprague-Dawley (SD) rats via the tail vein. Twelve hours after injection, massive hepatocyte necrosis with severe hemorrhage occurred in the liver, while renal tissue had a normal morphology. In addition, liver and kidney function was impaired severely, and serum biochemical indexes exhibited significant changes. These changes were consistent with the clinical features of HRS. Western blot and real-time PCR were then used to detect the protein and mRNA expression of renal IP3RI, respectively.

Joint D-GalN/LPS administration can induce HRS in SD rats at 12 h, which is concomitant with peaked IP3RI protein and mRNA expression in the kidney. Increased expression of IP3RI may be closely associated with HRS development and progression.

Our results suggest that IP3RI may be a signal molecule involved in the reduction of renal blood flow induced by renal vasoconstriction in HRS, thus providing a theoretical basis for further research of the pathogenesis of HRS. Gene silencing technology may be adopted to further elucidate the role of IP3RI in the pathogenesis of HRS.