To date, various signal transducers, cytokines, growth factors, and hormones have been reported to play an important role in homeostasis of various organs. Various cells and organs are involved in the hepatic regeneration process, which proceeds as a result of the coordination of many factors. While these factors are well known to be involved in the liver regeneration after the liver injury, however, as the details of such mechanisms have not been sufficiently elucidated, the practical applicability of hepatic regeneration based on the action of these and cytokines growth factors is still unclear. In terms of the involvement of the autonomic nervous system in hepatic regeneration, cell proliferation resulting from direct signal transduction to the liver has also been reported and recent studies focusing on the inter-organ communication via neural network opened a novel aspect of this field for therapeutic applicability. Therefore, the appropriate understanding of the relationship between autonomic neural network and liver regeneration through various organs including brain, afferent nerve, efferent nerve, etc. is essential. This mini-review explains the principle of neural system involved in the inter-organ communication and its contribution on the liver regeneration upon the liver injury reviewing recent progress in this field.

Many studies on the mechanisms of hepatic regeneration have led to the identification of cytokines, growth factors, and signal transducers that are produced by Kupffer cells and other cell types[1-17] which may play an important role in homeostasis of the liver (Table 1). These cytokines and growth factors are thought to cause cells enlargement and proliferation, resulting in functional recovery. However, as the details of such mechanisms have not been sufficiently elucidated, the practical applicability of hepatic regeneration based on the action of cytokines and growth factors is still unclear. Various cells and organs are involved in the hepatic regeneration process, which proceeds as a result of the coordination of many factors.

Moreover, in terms of the involvement of the autonomic nervous system in hepatic regeneration, cell proliferation resulting from direct signal transduction to the liver has also been reported[18-20].

More specifically, this refers to actions accompanying the activation of the parasympathetic nervous system, which mediates the hepatic branch of the vagus nerve. The autonomic nervous system was first described by John N Langley in 1916[21] as an important mechanism that maintains homeostasis in organisms. These nerves are distributed internally within the blood vessels, heart, lungs, gastrointestinal tract, liver[22,23], and reproductive organs and are controlled by a feedback system that is mainly situated in the brain. While the functions of the sympathetic and parasympathetic nerves comprising the autonomic nervous system have been considered as antagonistic, they are now believed to play an important organ-related role as part of a network that maintains homeostasis in organisms. This inter-organ communication is very important in various pathologies. For example, intestinal bacterial flora have been found to be strongly involved in Parkinson’s disease[24] and autism[25], and a system to control blood sugar has been discovered in which pancreatic beta cells proliferate via autonomic nervous system signaling following a hepatectomy[26,27-29].

These results suggest that an inter-organ network functions in a coordinated manner through the autonomic nervous system as a biological mechanism for hepatic regeneration and functional maintenance when the liver is damaged[30]. This mini-review describes how autonomic nerve fibers affect hepatic regeneration based on our recent research results.

Reportedly, in addition to humoral factors, the autonomic nervous system is also involved in the hepatic regeneration process. Most studies have examined direct feedback relationship between the liver and brain. Signals starting in the liver are transmitted via the afferent sympathetic nervous system to the ventromedial region of the hypothalamus and then to the lateral region of the hypothalamus; they then pass through the dorsal nucleus of the vagus nerve of the medulla oblongata after which they return to the liver[18,19]. Kiba et al[20]. reported that in rats that had undergone partial hepatectomy, hepatic regeneration was slow when the hepatic branch of the vagus nerve was resected. In addition, they demonstrated that when the ventromedial region of the hypothalamus, which is the center of the sympathetic nervous system, was destroyed, vagus nerve signal transduction became excessive, thereby promoting post-hepatectomy hepatic regeneration[31,32]. This phenomenon occurred even if hepatectomy was not performed, and chronological evaluation showed that cell proliferation in the hepatic regeneration process peaked on day 3[33].

Thus, autonomic nervous system feedback throughout the liver is involved in hepatocyte proliferation. Kiba et al[34] also demonstrated that when the ventromedial hypothalamus, the center of the efferent sympathetic nervous system, was destroyed, pancreatic beta cells and extrapancreatic secretory cells proliferated, activating the growth of epithelial cells in the gastrointestinal tract[35]. These results demonstrated the importance of the efferent vagus nerve in the activation of cell proliferation in various organs and suggested that when the liver is injured, neural signals relayed from the liver to various organs through the brain and efferent vagus nerve might contribute to homeostasis maintenance in the body.

Based on the suspected contribution of the neural network on hepatic regeneration after liver injury, we focused on the effect of various organs on liver regeneration after liver injury with respect to this network. While no reports on liver regeneration have focused on this neural network, several studies so far have focused on the pancreas as an organ controlled by the autonomic nervous system[26,27-29,36]. Briefly, marked proliferation of beta cells was noted in the pancreas following partial hepatectomy in response to signal transduction through the afferent sympathetic nervous system, brain, and efferent vagus nerve[27]. Additionally, similar results were obtained when gene transfer promoted the afferent signal transduction by ERK activation[26]. These results provide evidence that the autonomic nervous system is important in maintaining for blood sugar homeostasis after severe liver damage.

It appears that this autonomic nervous system first activates the afferent sympathetic nerve in the damaged liver, which transduces the signal to the center of the autonomic nervous system in the brain and then to the efferent vagus nerve; this results in the activation of cell proliferation in various organs inside the abdominal cavity, such as the liver, gastrointestinal tract organs, and pancreas. However, no study has focused on the effect of this system on liver regeneration. Therefore, here, we focus on this system as an effector of liver regeneration. While various factors might be involved, GI hormones are known to play an important role in hepatic regeneration.

Fujita et al[37] administered various gastrointestinal and pancreatic hormones, including glucagon, secretin, and cholecystokinin, to mice that had undergone partial hepatectomy and investigated their effects on hepatic regeneration based on weight changes and histological findings. They found that the mice exhibited liver weight increases of approximately 50% following glucagon and insulin administration and suggested that this effect was mainly due to hypertrophy of the remaining cells. Lai et al[38] also reported that the combined administration of glucagon and insulin was effective for hepatic regeneration in rats that had undergone partial hepatectomy. These results demonstrated that gastrointestinal hormones may play an important role in hepatic regeneration.

Many gastrointestinal hormones assist in the maintenance of homeostasis in living organisms. Among these, serotonin, which is emitted by chromaffin cells in the intestines, has been known to encourage proliferation of liver cells[39,40]. Serotonin is a monoamine neurotransmitter that is synthesized by the enzyme tryptophan hydroxylase 1 in chromaffin cells[41] and is released in the intestine[26,27] when the parasympathetic nervous system is activated[42]. Platelet granules also contain serotonin, which is released when platelets come into contact with liver cells, after which it functions as a growth factor for liver cells[40,41,43] through the 5-HT2 receptors. Moreover, it has been reported that mice deficient in tryptophan hydroxylase 1 exhibit poor liver regeneration after hepatectomy[41].

In addition, Matondo et al[44] reported that although serotonin transporter depletion disturbed biological homeostasis, a small amount of serotonin in the liver was sufficient for liver regeneration. Mechanistically, DNA synthesis in primary rat hepatocytes cultures was induced by serotonin[33], but it was arrested by 5-HT2 receptor blockade at G1/S transition[15,45]. In the pathophysiological state, reduction of serotonin reuptake transporter function caused insulin resistance and hepatic steatosis independent of the food intake[46]; serotonin protected mouse liver from cholestatic injury by stabilizing the bile salt pool after bile duct ligation through adaptation of renal transporters in cholestasis[47].

Thus, while serotonin has been reported to act as a growth factor, no analyses of an intra-organ network, focusing on increased serotonin production in the small intestine through the afferent sympathetic nervous system and the efferent vagus nerve branch, or the promotion of hepatic regeneration have been reported.

These reports provide evidence that gastrointestinal hormones may function as growth factors upon hepatic injury. Therefore, recent studies are focusing on inter-organ communication between the liver and GI tract upon liver injury. We have reported that the effect of serotonin on liver regeneration following liver injury is mediated through this neural relay, which begins in the liver and passes through the brain and GI tract and then returns to the liver[48,49]. Our results demonstrated that the partial hepatectomy increases the serotonin release from the GI tract contributing to the liver regeneration which were evidenced by the proliferating cell nuclear antigen, BrdU incorporation and liver weight-to-body weight ratio[48,49] (see details in reference 48). In addition, this activation was blocked by neuronal blockade of the afferent visceral nerve by capsaicin suggesting that the activation of the afferent visceral nerve from the liver to the efferent vagal nerve through the brain is important[48]. Therefore, the neural relay significantly contributes in the liver regeneration upon the liver injury by activating the release of GI tract hormones as a part of maintenance of homeostasis. A summary of our studies and the reported effects of the autonomic nervous system are shown in Figure 1. This figure illustrate that while the traditionally studies have shown the direct feedback between the liver and brain have been reported, neural relay signal communicating various organs is also important, which starts from the damaged liver to the GI tract through the afferent visceral nervous system, brain, and the efferent vagal nervous system contributes to activate and release the serotonin from enterochromaffin cells to promote liver regeneration. As various factors are related to the liver regeneration (Table 1), it is obvious however, further studies are necessary to clarify the relationship between the factors. 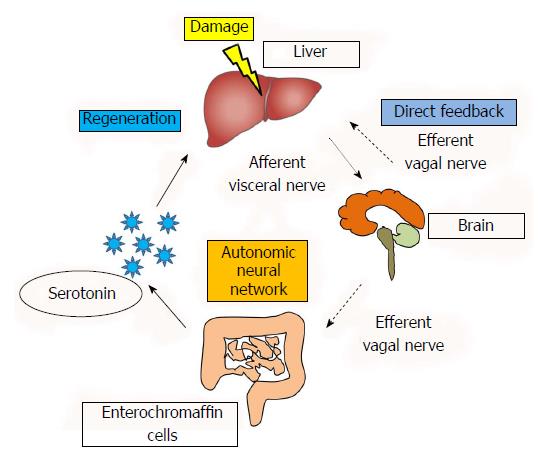 Figure 1 Involvement of neural signals in liver regeneration. This figure is partly reused and modified with updated information from Figure 1 in reference 49 with their permission.
CONCLUSION

The review of the relationship between autonomic neural network and liver regeneration shows that an inter-organ network is functioning in a coordinated manner through the autonomic nervous system as a biological mechanism for hepatic regeneration and functional maintenance when the liver is damaged. We believe that this study may represent a step toward the development of essential therapeutics to promote liver regeneration.

The authors would like to thank Takao Tsuchida, Division of Gastroenterology and Hepatology, Niigata University for his excellent assistance in preparing the figure.