Bone metastasis is a rare event in patients with gastric cancer, but pathologic fracture, paralysis, pain and hematological disorders associated with the bone metastasis may influence the quality of life. We report herein the case of a 53-year-old man who presented with primary remnant gastric cancer with bone metastasis. The patient requested further investigations after detection of a metastatic lesion in the 2nd lumbar vertebra during evaluation for back pain that had persisted for 3 mo. No other metastatic lesions were detected. He underwent total gastrectomy and palliative metastasectomy to aid in reduction of symptoms, and he received combination chemotherapy with tegafur (S-1) and cisplatin. The patient survived for about 60 mo after surgery. Currently, there is no treatment guideline for gastric cancer with bone metastasis, and we believe that gastrectomy plus metastasectomy may be an effective therapeutic option for improving quality of life and survival in patients with resectable primary gastric cancer and bone metastasis.

Core tip: Gastrectomy and metastasectomy may be an effective therapeutic option for improving quality of life and survival in selected gastric cancer patients with bone metastasis. Favorable factors, such as resectable solitary bone lesions, good performance status and normal serum carcinoembryonic antigen levels, should be utilized to stratify and select patients who will be good candidates for surgery.

The survival rate associated with gastric cancers has improved due to improvements in diagnostic technology, surgery, adjuvant therapy and increased detection at early stages. Although the incidence of gastric cancer has gradually declined, it remains the second most common cancer in South Korea, after thyroid cancer, according to the Korea Cancer Registry statistics for the year 2010. It is also the third leading cause of cancer-related death[1].

A substantial proportion of patients are diagnosed at an advanced stage with synchronous distant metastases. Treating such patients is a therapeutic challenge for physicians, since it is generally accepted that such patients have incurable disease and that treatment is administered with a noncurative intent. Distant metastasis in gastric cancer patients is known to be one of the most important prognostic risk factors, with associated parameters like depth of invasion and lymph node metastasis[2]. Bone metastasis is more commonly observed in other cancer types, like cancers of the breast, lung and prostate, but is rather rare in gastric cancer[3].

Gastric cancer with bone metastasis is associated with poor prognosis[4,5]. Moreover, it is related to pathologic fracture, paralysis, pain and hematological disorders, which may influence quality of life and need for further treatment. Disease management in such cases is a challenge for physicians, since no guidelines exist for treatment of patients with gastric cancer and associated bone metastasis. We present here a case of long-term survival after completion of total gastrectomy and metastasectomy for primary remnant gastric cancer (RGC) with bone metastasis. We also include a review of the relevant literature.

A 53-year-old male patient, who had complained of back pain, was found to have a mass in the 2nd lumbar vertebra by magnetic resonance imaging (MRI), and was transferred to our institution for further evaluation. He had no significant medical history, except for having undergone gastrectomy due to a gastric ulcer 15 years prior. At the onset, blood biochemical parameters were within normal range (alkaline phosphatase: 141 IU/L, normal range: 40-145 IU/L; calcium: 9.5 mg/dL, normal range: 8.2-10.8 mg/dL), as were the levels of carcinoembryonic antigen (CEA; 2.26 ng/mL, normal range: < 5.0 ng/mL), cancer antigen (CA) 19-9 (12.25 U/mL, normal range: < 37 U/mL) and lactate dehydrogenase (LDH; 152 IU/L, normal range: 70-178 IU/L). The MRI showed a suspicious metastatic lesion in the 2nd lumbar vertebra with enhancing signal intensity on a T2-weighted image, and bone scans showed a focal hot uptake at the 2nd lumbar vertebra (Figure 1A-C). A bone biopsy taken at the 2nd lumbar vertebra was diagnosed as metastatic adenocarcinoma. Gastroduodenoscopic findings showed a Borrmann type III lesion at the remnant stomach lesser curvature (Figure 1D), which was diagnosed as poorly differentiated adenocarcinoma by biopsy. Serum fasting gastrin level was within normal range, and Giemsa staining did not demonstrate Helicobacter pylori (H. pylori) infection in the gastric biopsy specimen. No other metastatic lesions were detected on chest computed tomography (CT) and abdominal pelvic CT scans. 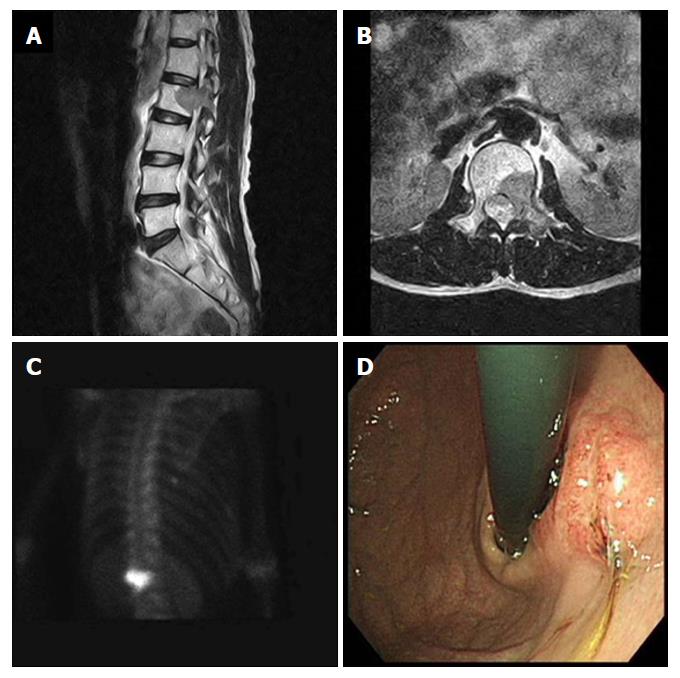 The patient underwent total gastrectomy with Roux-en-Y esophagojejunostomy and lumbar vertebrae metastasectomy (Figure 2A and B). Pathologic findings after the surgery described poorly differentiated adenocarcinoma, with invasion of serosa and massive lymphovascular invasion. Five metastatic lymph nodes were observed among the nine regional lymph nodes examined. Microscopically, the tumor consisted of solid nests of poorly differentiated tumor cells having ovoid nuclei and indistinct cytoplasm. Immunohistochemistry showed that the tumor cells exhibited diffuse immunoreactivity for cytokeratin AE1/AE3, but were negative for synaptophysin and vimentin, a test for neurofilament immunoreactivity that has been identified in most neuroendocrine tumors. These findings support the diagnosis of poorly differentiated adenocarcinoma (Figure 3A-D).

Figure 3 Histopathological and immunohistochemical findings of stomach cancer (A-D) and metastatic bone lesion (E and F). A: The stomach tumor consisted of solid nests of poorly differentiated tumor cells, with ovoid nuclei and indistinct cytoplasm (hematoxylin-eosin, × 400); B-D: Immunohistochemistry showed that the tumor cells exhibited diffuse immunoreactivity for cytokeratin AE1/AE3 (B: × 400), but were negative for vimentin (C: × 400) and synaptophysin (D: × 400), which supported the diagnosis of poorly differentiated adenocarcinoma; E: The bone tumors were identified as poorly differentiated tumors (hematoxylin-eosin, × 400), with histologic and immunohistochemical features identical to those of the carcinoma of the stomach that were positive for cytokeratin AE1/AE3 (F: × 400) and negative for vimentin (G: × 400) and synaptophysin (H: × 400).

Microscopically, the tumors of lumbar vertebrae were identified as poorly differentiated, with histologic and immunohistochemical features identical to those of the carcinoma of the stomach (Figure 3E-H). Bone marrow was also obtained from the patient’s lumbar spine during surgery, and no cancer cells were detected in the bone marrow aspirate. The results of postoperative pathologic findings led to a tumor-node-metastasis classification of T4aN2M1, according to the American Joint Committee on Cancer 7th edition staging manual.

The patient received palliative first-line combination chemotherapy with tegafur (S-1) and cisplatin for a year. Duration of relapse-free survival was 25 mo, when multiple metastases were found in follow-up to have developed on the right ileum and liver (Figure 4). Right ileum radiotherapy and second-line palliative combination of folinic acid, fluorouracil and oxaliplatin (known as FOLFOX chemotherapy) was administered. Third-line combination chemotherapy of folinic acid, fluorouracil and irinotecan (known as FOLFIRI) and fourth-line docetaxel chemotherapy proceeded, and the patient died 60 mo after surgery. 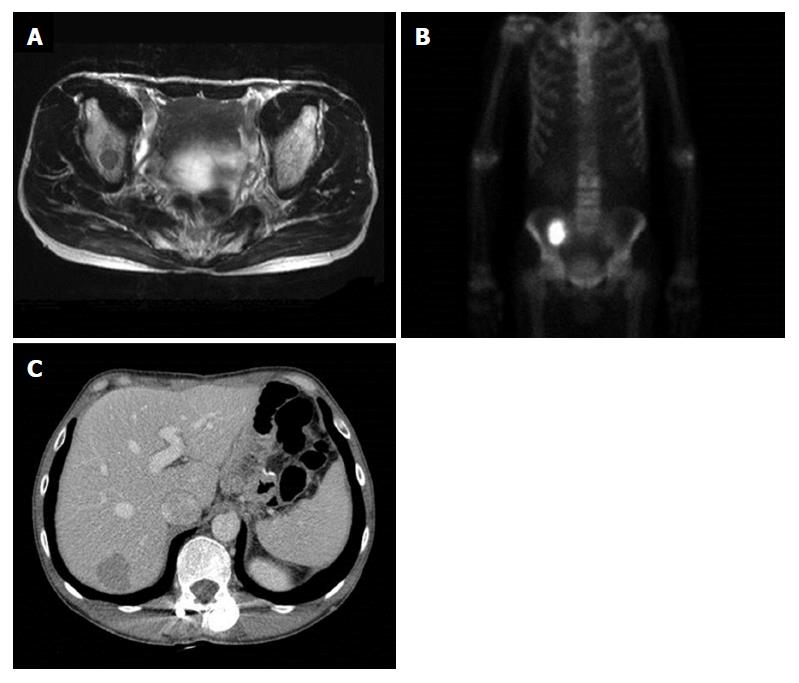 In this study, we report a case of RGC with synchronous isolated bone metastasis. The average interval between initial distal gastrectomy and the second surgery for RGC is reported to be 22.0-34.6 years for benign disease and 6.8-18.8 years for gastric cancer[6]. As possible important factors for the pathogenesis for RGC, H. pylori infection, duodenogastric reflux and denervation of gastric mucosa have been considered. Also, Billroth-II (B-II) reconstruction is known to be more prevalent in developing RGC than Billroth-I (B-I) reconstruction; the possible reason is continuous bathing by duodenogastric reflux, as well as mucosal inflammation and regeneration[6,7]. In the case described herein, H. pylori infection was not identified. But, the previous B-II reconstruction and persistent duodenogastric reflux could have been the possible cause of RGC in this patient.

While the number of patients diagnosed with gastric cancer has increased with the development of endoscopy and mass screening tests, the survival rate of gastric cancer patients has also improved due to the advancement of diagnostic technology for early detection, surgery and postoperative adjuvant therapy. However, there is a substantial portion of the patient population with unresectable gastric cancer due to synchronous distant metastasis. It is now accepted that the presence of bone metastasis is an independent prognostic risk factor for advanced gastric cancer[8].

However, the above studies were retrospective and selection bias cannot be ruled out. Evidence to support surgical intervention in these patients is not conclusive. There is a need for prospective randomized controlled studies to evaluate the value of resectable surgery on patients with gastric cancer with distant metastasis. Furthermore, in these studies, there was no case of metastasectomy in patients with synchronous bone metastasis. In addition, in the study conducted by Park et al[4] there was no evidence for curative resection of synchronous bone metastasis.

Clinicopathologic features associated with bone metastasis have not been fully established in the literature thus far. Sudo et al[18] reported that bone metastasis after surgery is observed mainly in cases of cancers involving the upper third or middle third of the stomach, which are associated with massive lymphatic invasion and poorly differentiated adenocarcinoma. In the present case, gastric cancer occurred in the remnant stomach of a patient who had undergone gastric ulcer surgery. Pathologic findings showed poorly differentiated adenocarcinoma with massive lymphovascular invasion. The mechanism by which bone metastasis develops in patients with gastric cancer is not known exactly, but York et al[19] observed that bone metastasis is most frequently seen in the vertebral body. Based on the location, they suggested the possibility of hematogenous spread through Batson’s vertebral plexus, bypassing portal circulation.

In the majority of cases, gastric cancer with synchronous bone metastasis is unresectable, and prognosis is usually very poor. In the present case, however, performance status was good, and the metastasis was a solitary, resectable bone lesion. These factors and aggressive palliative chemotherapy probably supported long-term survival of the patient after surgery. Therefore, we hypothesize that gastrectomy plus metastasectomy may be an effective therapeutic option for improving quality of life and survival in selected patients with bone metastasis. Favorable factors, such as resectable solitary bone lesions, good performance status and normal serum CEA levels, should be utilized to stratify and select patients who will be good candidates for surgery.

In conclusion, aggressive local therapy, including gastrectomy with metastasectomy and palliative chemotherapy, may be an effective therapeutic option for improving survival in patients with resectable primary gastric cancer and bone metastasis.

A 53-year-old man, referred after detection of a tumorous bony lesion in the 2nd lumbar vertebra during evaluation for back pain.

The patient had no significant medical history, except for having undergone gastrectomy due to gastric ulcer 15 years prior.

A bone biopsy taken at the 2nd lumbar vertebra led to diagnosis of metastatic adenocarcinoma. Gastric lesion was diagnosed as poorly differentiated adenocarcinoma by biopsy.

Aggressive local therapy, including gastrectomy with metastasectomy and palliative chemotherapy, may be an effective therapeutic option for improving survival in patients with resectable primary gastric cancer and bone metastasis.