Inflammatory fibroid polyp (IFP) is a rare non-neoplastic cellular proliferation, composed of fibrous tissue, blood vessels, and an inflammatory cell infiltrate dominated by eosinophils within an edematous and collagenous stroma[1]. The estimated incidence of IFP is 0.1% of all stomach polyps[2]. IFPs are most frequently found in the gastric antrum and are commonly ulcerated[1].

Several studies about gastric IFPs have reported its computed tomography (CT) findings and included only enhancement images of the single portal phase[3-8]. However, to the best of our knowledge, no previous report has been described about the CT findings of a gastric IFP showing delayed enhancement. Here, we report the dynamic enhanced CT imaging findings of a case of gastric IFP with massive fibrosis.

A 43-year-old female presented to the hospital with a 1-mo history of dyspepsia and epigastric pain. Physical examination was unremarkable. Blood chemistry findings were within normal range except for anemia with a hemoglobin level of 9.0 g/dL. Endoscopy showed an approximately 4 cm mass-like lesion with mucosal edema and superficial ulcer in the gastric antrum (Figure 1A). On endoscopic ultrasound (EUS), there was a heterogeneous hypoechoic submucosal mass-like lesion (Figure 1B). Only chronic inflammatory tissue without malignant cells was found on histological examination of biopsy specimens obtained through endoscopy. The patient had undergone an additional core biopsy of the submucosal lesion using EUS. However, fibrosis of submucosal lesion was extremely severe so failed biopsy using EUS. Also, the slight large size, non-pedunculated, intramural mass with fibrosis made it difficult for endoscopic resection. The patient underwent dynamic enhanced CT scan (LightSpeed16, GE Healthcare, Milwaukee, WI, United States) to evaluate the mass-like lesion in the gastric antrum. Portal phase contrast-enhanced CT showed marked wall thickening (about 2.9 cm in wall thickness, 7 cm in length) with overlying mucosal hyperenhancement in the gastric antrum (Figure 1C). The predominantly thickened wall was the submucosal layer, which showed hypoattenuation (about 85 HU) relative to the back muscles on portal phase imaging (Figure 1C) and hyperattenuation (about 115 HU) on 3-min delayed phase imaging (Figure 1D). The lesion did not show extension to adjacent organs such as the liver or pancreas and there was no lymph node enlargement (Figure 1E). These CT imaging findings were suggestive of a submucosal tumor or muscular hypertrophy of the stomach. However, a malignant tumor such as a signet ring cell carcinoma (SRC) could not be ruled out because of markedly thickened submucosal layer with delayed enhancement. Thus, an antrectomy with gastroduodenostomy was performed. Macroscopic inspection revealed the submucosal mass-like lesion measuring 4.5 cm × 4 cm × 3 cm (Figure 1F). Microscopic examination (original magnification × 12.5) demonstrated that the borders of the lesion were poorly demarcated and difficult to discern from the adjacent submucosal connective tissue (Figure 1G). Microscopic examination (original magnification × 100, × 400) showed fibroblastic cells with well-vascularized fibrotic stroma and infiltrate of chronic inflammatory cells, including many eosinophils (Figure 1H and I). No mitotic activity was identified. The final diagnosis was an IFP with prominent fibrotic and hyalinized stroma. 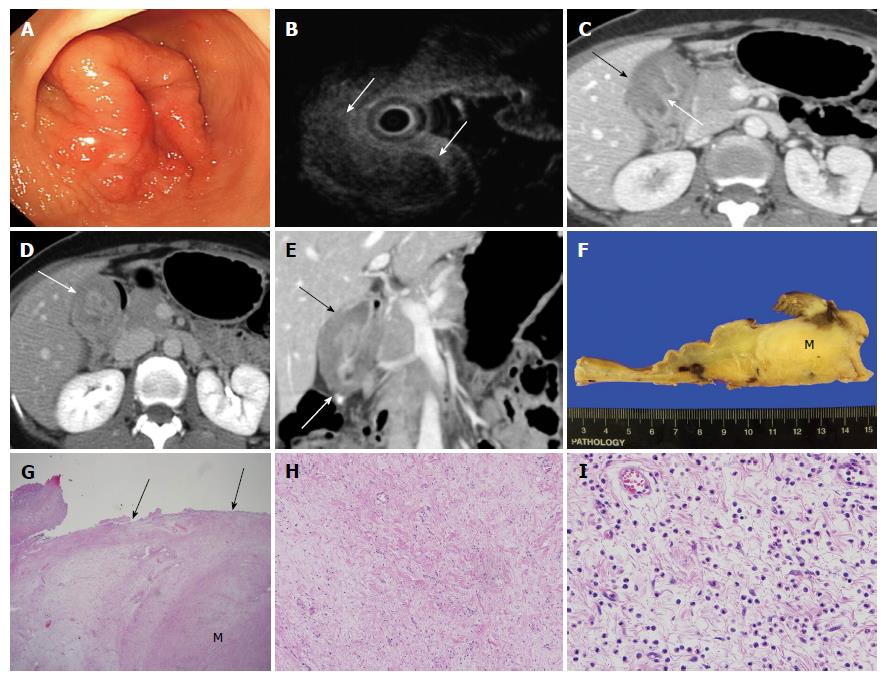 IFP is a rare benign lesion of the gastrointestinal (GI) tract that arises from the deep mucosa and submucosa[1,3]. IFPs can occur anywhere in the GI tract, but the gastric antrum is the most common site, followed by gastric body and fundus[4,5]. The size of gastric IFP is range from 1.2-6.5 cm and mean diameter about 2 cm. However, maximum diameter is up to 11cm and unexpected growth of IFP has been reported[1,3,4,7]. The size of our case is measuring 4.5 cm × 4 cm × 3 cm on histopathology and 7 cm length on CT that is slightly larger than usual case. The morphology features of gastric IFPs are commonly pedunculated, semi-pedunculated or sessile with covered normal mucosa. It can appear intramural mass with smooth, well-defined margins forming obtuse angles with the surrounding bowel wall[1,6,9]. The latter is consistent with our case. Clinical manifestations of gastric IFPs are mainly determined by their size and anatomical location. Patients may have symptoms such as abdominal pain, nausea, vomiting and frequent dyspepsia. If the lesions are located in the distal antrum or pylorus, they can cause gastric outlet obstruction. Massive GI bleeding with anemia can also result from IFPs with mucosal ulceration[6-8]. Our patient had history of dyspepsia, epigastric pain and mild anemia and these may be related to superficial ulcer of mucosa underlying intramural mass located in gastric antrum.

Although the exact etiology remains unknown, there are many postulate supposed to be related to IFPs including inflammation, trauma, previous surgery, infection or allergy. Some authors suggest that the IFP could be a result of inflammatory response of submucosa due to the localized damage to mucosa. Furthermore, inflammatory reactive process can be stimulated by bacterial, chemical, metabolic factors. Lately, several study have postulated that Helicobacter pylori infection is related with IFPs[1,3,7,9].

Endoscopy reveals only the presence of a submucosal lesion. Biopsy specimens using standard biopsy forceps may not offer useful histologic information because the lesion is in the submucosal layer. The EUS manifestations of IFP are an indistinct margin, hypoechoic subepithelial tumor, and located within the second and third layer (the deep mucosal and the submucosal layers) with an intact fourth layer (muscle layer)[6].

Typical CT findings of gastric IFP are smooth or lobulated contoured endoluminal mass. Most of the reviewed cases showed overlying mucosal hyperenhancement. An ulcer at the lesion surface and adjacent gastric wall thickening can be present. Lesion homogeneity and enhancement degree are varied[4]. The IFP enhancement patterns seem closely related to differences in the pathologic characteristics of the IFPs, such as the presence of inflammatory cells, particularly eosinophils, edematous and myxoid stroma, prominent blood vessels with perivascular fibroblastic proliferation, and hyalinization[4]. Some reports suggested that low attenuated areas in the IFP were histologically correlated with myxoid changes with edema[4,10]. In our case, the markedly thickened submucosal layer showed increase enhancement on the 3 min-delayed phase. There have been no previous reports on dynamic enhanced CT imaging finding of gastric IFP showing delayed enhancement. When compared with pathologic findings, the cause of delayed enhancement of thickened submucosal layer is thought to be prominent fibrotic and well vascularized, hyalinized stroma.

The evolution of IFP is divided into four stages based on size and histology. First, nodular stage shows diameter range from 0.2-0.5 cm and major component is immature fibroblasts. Second, fibrovascular stage is most common, shows diameter range from 0.7-3.4 cm. This stage describes the characteristic onion-skin appearance of mature fibroblasts surrounding blood vessels or irregular, coarse arrangement. These typical findings are more frequently seen at younger stage and seen only peripheral areas of the senescent stage or even in mucosal layer in cases without superficial ulcer. Other components of second stage include eosinophil infiltration and numerous inflammatory cells. When the size of IFP became larger, the histopathological components become changes. Third, organized stage is sclerotic or edematous type and range from 2.5-12.0 cm. Major components of sclerotic stage are thick collagen bundle and prominent hyalinization. Edematous stage shows vascular proliferation, edema due to intracellular fluid. Although classic histopathologic findings of perivascular onion skinning and prominent eosinophils infiltration are well known, but IFPs evolve, they may manifest short fascicular growth pattern, a sparse eosinophils and remarkable hyalinization. Interestingly, as the size of the IFPs increased to find mixed histopathologic features more commonly, suggesting change of the original histologic characteristics[11,12]. Our case showed fibroblastic cells with well-vascularized fibrotic stroma and infiltrate of chronic inflammatory cells, including many eosinophils. This may be explained by mixed histologic pattern of fibrovascular and organized stages. Also superficial ulcer in mucosal layer, which may be contributed to the absence of characteristic onion-skin appearance of spindle cells.

Previous study, Advanced gastric cancer (AGC) showed delayed enhancement on CT (after 180 s for the start of infusion of contrast material) without regard to Borrmann’s type. Correlation of the histopathologic findings with radiologic enhancement pattern, signet ring cell type showed good and delayed enhancement but mucinous type was poorly enhanced due to high mucin content[13]. Another previous study, when gastric wall thickening in AGC on CT, high-degree contrast enhancement was more usual in SRC than that with non-signet ring cell carcinoma. When histopathological findings are considered, malignant cells and immature fibrosis are causes of enhancement in SRC[14]. Since in our case, the lesion had marked wall thickening with delayed enhancement, malignant tumor could not be ruled out, particularly SRC. The operation was performed because the cancer was not excluded in the radiological findings. However, several CT features such as a preserved mucosal layer and lesions without perigastric fat infiltration or lymphadenopathy help the diagnosis IFP rather than malignant tumor.

The differential diagnosis of gastric IFPs include other submucosal lesions, such as leiomyoma, gastrointestinal stromal tumors (GIST), and heterotopic pancreas[4,9]. Leiomyomas typically present as homogenous masses with an endoluminal growth pattern and lower attenuation than back muscles; however, leiomyomas of the stomach are rare and if they develop, they are almost located in the gastric cardia[4,5,15]. GISTs are most commonly located in the gastric body. GISTs arise from the deep muscularis propria and have an exophytic, intramural, or mixed growth pattern. GISTs manifest with various enhancement patterns, and the degree of enhancement may be higher in hypervascular characteristic GISTs than in IFPs. Invasion into adjacent organs such as the pancreas and colon is only seen in enlarged, exophytic GISTs. Areas of hemorrhage, necrosis or cystic degeneration are frequently observed in focal low attenuated lesions of GISTs[4,5,15]. A heterotopic pancreas is typically located in the prepyloric antrum and duodenum. It presents as an ovoid or flat mass with an endoluminal growth pattern and higher attenuation than the back muscle with a prominent enhancement of the overlying mucosa[4,15].

In conclusion, dynamic CT in addition to endoscopy may be useful in the diagnosis of gastric IFP. Gastric IFP should be considered in the differential diagnosis if the submucosal layer of the gastric wall is markedly thickened with delayed enhancement and the mucosal layer is preserved without perigastric fat infiltration.

A 43-year-old female had a 1-mo history of dyspepsia and epigastric pain.

Gastric submucosal tumor was suspected on endoscopy but it was difficult to excluded malignant tumor on computed tomography (CT).

The pathology showed a submucosal mass-like lesion with fibroblastic cells with well vasculized fibrotic stroma, infiltration of chronic inflammatory cells including many eosinophils.

Several studies about gastric inflammatory polyp (IFP) have reported its CT findings of enhancement images on portal phase. To the best of our knowledge, no previous report has been described about the dynamic enhanced CT findings of a gastric IFP with delayed enhancement which mimicking malignant tumor such as signet ring carcinoma.

In this case report, the uncommon difficult terms have not been used.

Gastric IFP should be considered in the differential diagnosis if the submucosal layer of the gastric wall is markedly thickened with delayed enhancement and the mucosal layer is preserved without perigastric fat infiltration.

It is a very good case report, with many images that allow an easy reading of the manuscript. It is well written, and the explanation and conclusion is clear.

Author contributions: All authors contributed to the acquisition of data, writing, and revision of this manuscript.