Research Domain of This Article
Integrative and Complementary Medicine

AIM: To investigate the hepatoprotective effect of improved prescription of Taohechengqi-tang (IPTT) against acute liver failure (ALF) in rats.

CONCLUSION: IPTT attenuates inflammation in ALF via inhibition of HMGB1 production, which may contribute to limited liver regeneration.

Core tip: Acute liver failure (ALF) is a life-threatening condition. Our prospective cohort study demonstrated that high doses of herbs for clearing heat and resolving stasis have a protective effect on LF. However, the curative mechanism is unclear. Our evidence showed that improved prescription of Taohechengqi-tang attenuated the inflammatory reaction of ALF in rats via inhibition of high mobility group box 1 production, which may contribute to recovery of limited liver regeneration. We provide evidence for the clinical application of Chinese herbs for clearing heat and resolving stasis.

Acute liver failure (ALF) is a life-threatening condition. It is accompanied by an intense inflammatory response, resulting in massive hepatocyte necrosis and fatal multiorgan failure[1]. Hospital mortality from ALF was as high as 83% in 1973-1978, dropping to 38% in 2004-2008[2]. The only treatment option shown to improve radically the outcome of LF is emergency liver transplantation (LT)[3]. Nevertheless, due to a lack of donated livers, nontransplanted mortality in ALF was > 20% with a waiting time of up to 6 wk[4]. In addition, the complex pathophysiological mechanisms of LT need further study.

According to traditional Chinese medicine (TCR), the syndrome of heat toxin stagnation is a major pattern of LF[5]. The incidence of the pattern was reported to be 58.6% in an epidemiological investigation from China[6]. Taohechengqi-tang (TT) is a well-known traditional Chinese herbal formulation, documented in Shang Han Za Bing Lun (a book of TCR on febrile and miscellaneous diseases in the Han Dynasty, AD 200-210). Based on TCR theory, TT is a classic formulation for clearing heat and resolving stasis and is used for treating not only diabetes mellitus[7] but also liver diseases. A recent study indicated that TT protected against chemically induced liver injury, at least partially through an antioxidant-like mechanism[8].

In our prospective cohort study, high doses of herbs for clearing heat and resolving stasis had a significant protective effect against LF[9]. However, the curative mechanism is still unclear. The present study was performed to investigate the effect of improved prescription of Taohechengqi-tang (IPTT) in ALF rats and its underlying mechanisms.

IPTT consists of seven types of TCM ingredients (herbal plants and animal-based materials) (Table 1). All TCMs were purchased from Sichuan Chinese Herbs Co. Ltd. (Chengdu, China) and validated by Prof. Zhu-Yun Yan (Chengdu University of Traditional Chinese Medicine, China). All indicators of the above-mentioned TCMs were in line with the standards of the Chinese Pharmacopoeia (2010). Voucher specimens were deposited at the Affiliated Hospital of Chengdu University of Traditional Chinese Medicine (Chengdu, China).

For the preparation of rats with D-GalN-induced ALF, rats were administered an intraperitoneal injection of D-GalN (1.4 g/kg). The control group was given intraperitoneally the same dose of saline. Thirty-six hours later, all rats were sacrificed. Blood samples (6 mL) were collected via the femoral artery, centrifuged at 3000 rpm for 10 min, and the sera were kept at -70 °C for detection of biochemical parameters. The livers were rapidly removed, and tissues were removed from the left lobes, fixed in 10% neutral formalin, and retained for further analyses, including hematoxylin and eosin (HE) staining, fluorescence quantitative reverse transcriptase polymerase chain reaction (qRT-PCR), and proliferating cell nuclear antigen (PCNA) immunohistochemistry assay.

Liver tissues obtained from each rat were fixed, embedded in paraffin, and cut into 3-5 mm sections. HE staining was used to evaluate the degree of hepatocyte necrosis. Microscopic injuries were graded according to a semiquantitative scoring system on a scale of 0 to 4 (0 = no discernable necrosis, 1 = bridging necrosis, 2 = confluent necrosis, 3 = sub-massive necrosis, and 4 = massive necrosis)[1]. In order to minimize bias, each slide was read by three pathologists in a blinded manner and observed three times.

PCNA staining of the formalin-fixed and paraffin-embedded liver tissues was performed with an immunohistochemistry kit purchased from Boster Bioengineering Co. Ltd. (Wuhan, China). The number of PCNA-positive cells was counted in five random fields at 40 × magnification for each section. An average of the percentage of PCNA-positive cells was taken over these fields[12]. Sections were examined microscopically, and photographs were collected using a digital image-capture system (CX40; Olympus, Tokyo, Japan).

Continuous variables were summarized as mean ± SD. The histopathological scores, biochemical parameters, mRNA, and PCNA expression were analyzed by one-way analysis of variance (ANOVA), followed by the Student’s t test. All analyses were performed with SPSS version 17.0 (Chicago, IL, United States). All P values were two-sided, and P < 0.05 was considered statistically significant.

The histopathological results are shown in Table 2 and Figure 1. Light microscopy revealed no liver necrosis in the control group, but massive hepatocyte necrosis was observed in rats treated with D-GalN. Compared to the model group, necrosis was markedly reduced in the IPTT and SNMC groups, and IPTT had a more significant impact. 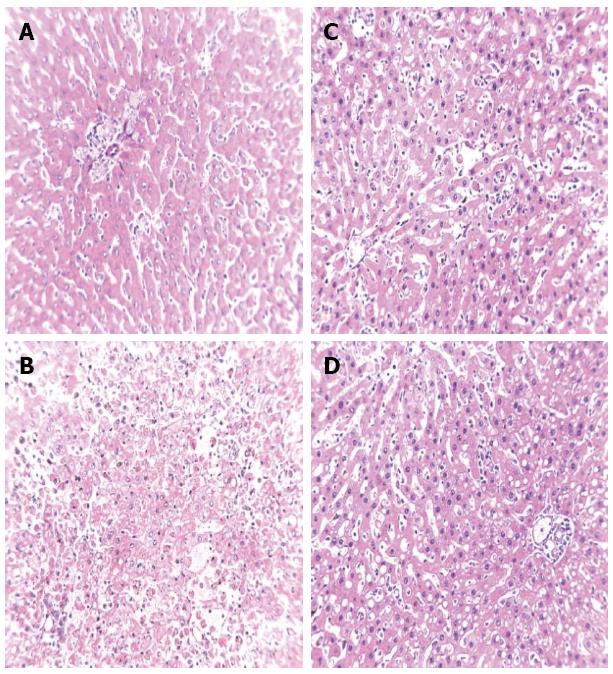 mRNA expression was observed as shown in Table 3. Compared to the model group, mRNA expression of HMGB1, TLR4, NF-κB, and caspase-3 were markedly reduced in the control, IPTT, and SNMC groups. Moreover, IPTT was found to have a more significant impact than SNMC.

Table 3 and Figure 2 show that the mean PCNA-positive rates were significantly higher in the model, IPTT, and SNMC groups than in the control group. The PCNA-positive rate in the IPTT group was highest among the three groups. 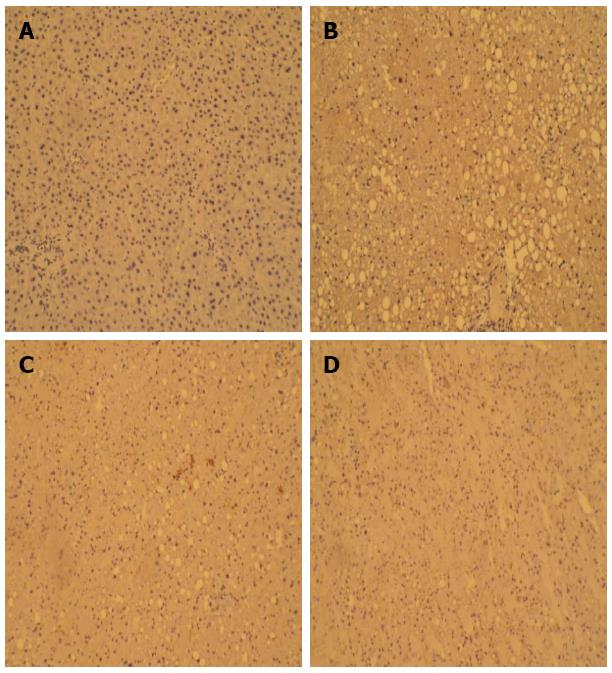 In our study, IPTT not only remarkably improved the biochemical and coagulation profiles in serum, but it also reduced histopathological scores in ALF induced by D-GalN.

Inflammation plays a centrals role in the development of ALF. The net loss of hepatocytes mainly contributes to overwhelming injury with subsequent cell death rather than a lack of regeneration[13,14]. Similar to severe acute pancreatitis and sepsis, ALF initially starts with a systemic inflammatory response syndrome (SIRS phase) and is followed by a compensatory anti-inflammatory response syndrome[15,16]. There is an imbalance in both the pro- and anti-inflammatory systems, leading to immune-inflammatory dysregulation[17]. The SIRS in ALF, whether or not precipitated by infection, is characterized by prolonged hypercytokinemia, which is associated with the systemic complications (e.g., encephalopathy, infection, and renal failure) and poor outcome[18-20].

Overactivation of the TLR4/NF-κB pathway is correlated with these pathological events in ALF. TLR4 is a member of the TLR family recognizing pathogen-associated molecular patterns[21]. One of its ligands is bacterial lipopolysaccharide (LPS)[22]. Once TLR4 recognizes LPS or LPS-CD14 complex, macrophages and dendritic cells are activated to present antigen to helper T cells. Furthermore, upregulated TLR4 signaling activates NF-κB via a MyD88-dependent pathway and/or MyD88-independent pathway. NF-κB is a downstream intracellular molecule of different receptors and induces the release of proinflammatory cytokines, such as tumor necrosis factor (TNF)-α, interleukin (IL)-1, and IL-6[23-25]. TNF-α, the core of the cytokine network, still plays an important role in the development of hepatocyte apoptosis. The binding of TNF-α to the TNF receptor 1 triggers the apoptotic cascade mediated by proapoptotic Bcl-2 family proteins[26,27].

HMGB1 is a nuclear protein with cytokine-type functions that is passively released during necrosis or actively secreted during immune cell activation[28]. There are many receptors, including the receptor for advanced glycation endproducts, TLR2, TLR4, and TLR9[29], to which HMGB1 can bind. TLR4 is the critical receptor mediating the inflammatory activity of HMGB1[30,31]. Once the HMGB1/TLR4/NF-κB pathway is activated, overexpression of TNF-α induces hepatocyte necrosis and activates the TNF-α-mediated extrinsic apoptotic pathway[32]. Our results support the anti-inflammatory and antiapoptotic effects of IPTT, as the liver expression of HMGB1, TLR4, NF-κB, and caspase-3 was significantly reduced in ALF rats. Moreover, IPTT improved hepatocyte regeneration.

Acute liver injury may recover via the process of hepatocyte regeneration once the injury is discontinued. After massive liver injury, the capacity of hepatocyte proliferation was not lost, only severely suppressed[33]. In a recent study, HMGB1 was reported to impair hepatocyte regeneration after acetaminophen overdose, and blockade of HMGB1 enhanced liver recovery[34,35]. Our results showed that severe liver damage limited hepatocyte regression. However, the hepatoprotective effect of IPTT might contribute to liver regeneration. Furthermore, IPTT may be sensitive to the stimulation of growth factors, such as HGF and transforming growth factor (TGF) α, and progress into the cell cycle for replication[36].

IPTT has been used for a long time in the Affiliated Hospital of Chengdu University of Traditional Chinese Medicine[9] and is composed of seven different types of TCM. Among them, Radix paeoniae rubra was effective in attenuating hepatocyte apoptosis, and this effect was partly mediated through the activation of the mitochondrial pathway and subsequent regulation of expression of particular proapoptotic genes[37]. Semen persicae protected against cisplatin-induced hepatotoxicity by reducing cisplatin-induced oxidative stress[38]. Flos carthami protected the liver from long-term alcohol injury, which was related to enhanced antioxidant capacity and inhibition of TGF-β1 expression[39]. Radix et rhizoma rhei palmate promoted bioavailability and liver protective effects and prevented and treated hepatic encephalopathy in rats with thioacetamide-induced ALF[40,41]. IPTT combined these Chinese herbal medicines following the principle of clearing heat and resolving stasis. Our data suggested that IPTT protected against ALF through its anti-inflammatory, antiapoptotic, and regeneration promoting effects. It provided evidence for clinical application of Chinese herbs for clearing heat and resolving stasis.

In conclusion, IPTT attenuates inflammatory reaction of ALF in rats via inhibition of HMGB1 production, which may contribute to recovery of limited liver regeneration.

Acute liver failure (ALF) is a severe clinical syndrome with high mortality. In previous studies, Chinese herbal medicine has been shown to improve the outcome of LF. Nevertheless, pharmacological research of Chinese medicine is still lacking.

A systemic inflammatory response syndrome in ALF is characterized by prolonged hypercytokinemia, which is associated with the systemic complications and poor outcome. The high mobility group box (HMGB)1/Toll-like receptor 4/nuclear factor-κB pathway has been the recent research focus in inflammation.

The present study demonstrates that improved prescription of Taohechengqi-tang (IPTT) attenuated the inflammatory reaction of ALF. One of the mechanisms is likely related to inhibition of HMGB1 production, which contributes to recovery of liver regeneration.

The data from this study provide a rational basis for IPTT for treatment of LF in clinical practice. It also provides evidence for clinical application of Chinese herbs for clearing heat and resolving stasis.

ALF is a clinical syndrome in which abrupt onset, manifesting as jaundice and coagulopathy, is complicated within 2 wk by grade II + encephalopathy in a patient with undiagnosed chronic liver disease.

The experiments appear to be well conducted and the conclusions drawn are justified. The manuscript has novelty and significance.