FGFR1 amplification and MYC expression have prognostic implications in resected ESCCs with respect to adjuvant therapy. The role of FGFR1-targeted therapy in ESCC remains to be explored.

Esophageal cancer is the eighth most common and the sixth leading cause of cancer-related mortality worldwide[1]. Esophageal squamous cell carcinoma (ESCC) accounts for the majority of esophageal cancers. Recently, genomic and molecular alterations have been discovered in ESCC, including activation of the receptor tyrosine kinase (RTK) pathway, cell cycle dysregulation, activation of Wnt and Notch signaling pathways and epigenetic modifications[2,3]. However, molecular targeted therapy for ESCC remains to be established[4].

Fibroblast growth factor receptors (FGFRs) are RTKs expressed in many different cell types and regulate cell proliferation, differentiation and survival. FGFRs also have oncogenic roles in many cancers[5,6]. In contrast, the FGFR signaling pathway can act as a tumor suppressor by promoting cell differentiation, regulating other oncogenic pathways, protecting cells from injury, or mediating immune surveillance[5,7]. FGFR1 is one of the most frequently amplified genes in ESCC[2,8,9]. Additionally, new drugs targeting FGFR and its related pathways, including multi-kinase inhibitors and selected FGFR inhibitors, have been introduced for cancer treatment[5,10]. However, the prognostic significance of FGFR1 amplification in patients with ESCC remains controversial[11,12].

Pulmonary squamous cell carcinoma (SCC) is another cancer frequently showing FGFR1 amplification. Reportedly, MYC expression together with FGFR1 amplification regulates oncogenic transformation of FGFR1 and modulates responses to FGFR inhibitors in pulmonary SCC[13,14]. Those studies showed that FGFR1, located at 8p12, and MYC, located at 8q24, were frequently co-amplified in pulmonary SCC[13]. MYC plays an important role in cell proliferation and carcinogenesis in many types of cancer[15,16]. Additionally, a potential role of MYC as a predictor of the sensitivity to FGFR inhibitors in pulmonary SCC requires further investigation. However, the prevalence of FGFR1 and MYC alterations and their relationship have not been addressed in patients with ESCC. Thus, we investigated FGFR1 amplification and MYC amplification and expression in patients with resected ESCC and analyzed their clinicopathological features and prognostic significance.

Patients who underwent surgical resection for ESCC at Seoul National University Hospital (SNUH) from 2000 to 2013 were reviewed. Patients who received neoadjuvant chemo- and/or radiotherapy and those who had distant metastasis at the time of surgery were excluded. Finally, 180 total patients participated in this study. Clinical data including demographic features, treatment modalities and outcomes were obtained from medical records by an oncologist (B.K.). Overall survival (OS) was calculated from the date of diagnosis to the date of death from any cause or the last follow-up, and disease-free survival (DFS) was calculated from the date of diagnosis to the date of disease recurrence. Pathological tumor-node-metastasis (TNM) stage was based on the 7th American Joint Committee on Cancer. A tissue microarray was constructed from 2-mm diameter cores obtained from representative tumor areas of formalin-fixed paraffin-embedded tissue blocks and submitted for fluorescence in situ hybridization (FISH) and immunohistochemistry (IHC). This study followed the World Medical Association Declaration of Helsinki recommendations and was approved by the Institutional Review Board of SNUH (H-1405-055-579).

To evaluate FGFR1 and MYC gene copies, FISH was performed using Vysis LSI FGFR1 SpectrumRed probe, Vysis LSI c-MYC (8q24.12-q24.13) SpectrumOrange probe and Vysis CEP8 (D8Z2) SpectrumGreen probe as a chromosome enumeration probe (Abbott Molecular, Abbott Park, IL, United States), according to the manufacturer’s protocol and as reported previously[17]. The entire tumor area was scanned for hot spots representing increased FGFR1 copy numbers. Random areas were selected for evaluation if the signals were distributed homogeneously. A minimum of 60 non-overlapping tumor nuclei were counted for the number of FGFR1 and CEP8 signals. FGFR1 gene copy status was classified according to the criteria proposed by Schildhaus et al[18]. In brief, high-level FGFR1 amplification was defined as follows: (1) an FGFR1/CEP8 ratio ≥ 2; (2) ≥ 15 FGFR1 signals in ≥10% of tumor cells; or (3) average number of FGFR1 signals/cell ≥ 6. Low-level FGFR1 amplification was defined as ≥ 5 FGFR1 signals/cell in ≥ 50% of tumor cells. The same methods and criteria were applied to evaluate MYC gene status.

To evaluate MYC expression, IHC was performed using a rabbit monoclonal anti-c-MYC antibody (EP121, Cell Marque, Rocklin, CA, United States) and the Benchmark XT autostainer (Ventana Medical Systems, Tucson, AZ, United States). MYC expression was evaluated using a four-tier scoring system as follows: 0, none or any staining in < 10% of cells; 1, weak; 2, moderate; and 3, strong staining in ≥ 10% of tumor cells. Cases with a score of 1-3 were considered to express MYC.

FGFR1 and MYC alterations in ESCC and the associated clinicopathological features 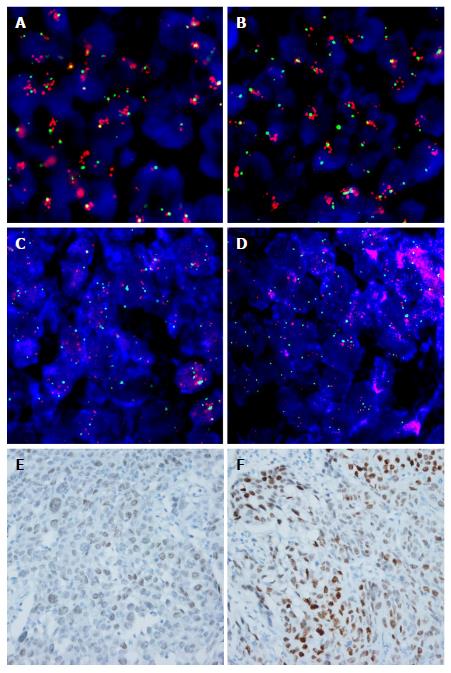 Prognostic significance of FGFR1 and MYC status in patients with ESCC

In this study, we comprehensively investigated FGFR1 amplification and MYC amplification and expression in ESCC to elucidate the associated clinicopathological characteristics and explore the potential of FGFR1 and MYC as targets for cancer therapy.

To the best of our knowledge, this is the largest study to evaluate MYC status using IHC and FISH in ESCC. Kaplan-Meier analysis demonstrated that MYC expression, but not amplification, was associated with prolonged survival. This result might be contradictory to the role of MYC as an oncogene. In this study, MYC expression was more common in ESCC patients of younger age and in the early TNM stage, and it was not an independent prognostic factor. Thus, the favorable prognosis of patients with ESCC who showed combined FGFR1 amplification and MYC expression in the group without adjuvant therapy might be due to the association of FGFR1 amplification with prognosis. Based on this study, MYC status might have little, if any, prognostic implication in patients with ESCC. However, more studies using a large cohort of patients are needed to validate the prognostic significance of MYC in ESCC.

However, this study had some limitations. First, it was a retrospective study and, as such, the specific regimen of adjuvant therapy may not have been well-controlled. Second, we used a TMA of 2 mm diameter, which may not reflect the intratumoral heterogeneity of FGFR1 and MYC status. However, comparative analysis showed that FGFR1 amplification status was not significantly different between primary and nodal metastatic tumors. In contrast, MYC amplification status was significantly different between these two groups. Third, small groups were compared as a result of subgroup analysis according to the different treatment modalities. Thus, another study using large prospective cohorts is required to validate the prognostic role of FGFR1 amplification in ESCC according to adjuvant therapy status.

Although ESCC is an aggressive cancer with poor clinical outcomes, treatment approaches remain limited, requiring the development of novel strategies including targeted molecular therapy. This study demonstrated that FGFR1 was amplified in approximately 20% of ESCCs, and moreover, FGFR1 amplification status was maintained during lymph node metastasis; hence, this group may benefit from therapeutic inhibition of FGFR1. FGFR1 amplification is considered an adequate factor to predict sensitivity to FGFR inhibitors[24]. However, FGFR inhibitors resulted in insufficient clinical responses in patients with FGFR1-amplified lung cancer[25,26]. A recent study showed that MYC expression might modulate the sensitivity of FGFR1-amplified pulmonary SCC to FGFR1 inhibitors[13]. In that study, 40% of FGFR1-amplified pulmonary SCCs expressed high levels of MYC[13], which was similar to our results in that 54.1% (20/37) of FGFR1-amplified ESCCs expressed MYC. Among the all patients with resected ESCC, 12.3% (20/163) exhibited both FGFR1 amplification and MYC expression. Based on the pulmonary SCC study, this population could be a potential candidate for FGFR inhibitor therapy in ESCC patients. The role of therapy targeting FGFR1 or MYC in ESCC remains to be explored by further in vitro and clinical studies.

It has been demonstrated that fibroblast growth factor receptor 1 (FGFR1) and MYC are frequently co-amplified and play a role in neoplastic transformation in pulmonary squamous cell carcinoma (SCC). Moreover, a potential role of MYC as a predictor of the sensitivity to FGFR inhibitors in pulmonary SCC has been reported. Although FGFR1 and MYC alterations have been reported by genomic studies for esophageal squamous cell carcinoma (ESCC), the prevalence of FGFR1 and MYC alterations and their relationship remains to be clarified in patients with ESCC. Thus, we investigated FGFR1 amplification and MYC amplification and expression in patients with ESCC and analyzed their clinicopathological features and prognostic significance.

ESCC is one of the leading causes of cancer-related mortality worldwide and novel treatment strategies other than surgery and conventional chemo- and radio-therapy are required to improve clinical outcome. However, molecular targeted therapy for ESCC remains to be established. The results of this study contribute to clarifying the biological role of FGFR1 and MYC, and therapeutic potential of FGFR targeted therapy in patients with ESCC.

This study suggests that patients with ESCC harboring combined FGFR1 amplification and MYC expression might benefit from therapies targeting FGFR1 and/or MYC, especially those with advanced disease requiring adjuvant therapies.

FGFR1 is a receptor tyrosine kinase playing an oncogenic role in many cancers and can be targeted for molecular therapy. MYC is an oncogene and contributes to sensitivity to FGFR inhibitor in pulmonary squamous cell carcinoma (SCC). Fluorescence in situ hybridization (FISH) is a tool useful to evaluate the gene amplification using tumor tissues from patients with solid tumor.

It is a very interesting article presenting novel data on role of FGFR1 and MYC status in ESCC. All parts of the manuscript were composed correctly and they contain suitable information. Tables and figures were constructed appropriately. Statistical analysis of data was performed correctly with using the appropriate tests. All references are actual and relevant to the text of article.