To evaluate the cytological diagnostic capacity and sample quality of the slow-pull technique and compare them with different suction techniques.

From July 2010 to December 2015, 102 patients with pancreatic solid lesions who underwent endoscopic ultrasound-guided fine-needle aspiration (EUS-FNA) with 22-gauge needles were retrospectively evaluated. EUS-FNA diagnosis was based on a cytological examination, and final diagnosis was based on a comprehensive standard of cytological diagnosis, surgical pathology and clinical or imaging follow-up. Cytological specimens were characterized for cellularity and blood contamination. The cytological diagnostic capacity and sample quality of the slow-pull technique and suction techniques with 5-mL/10-mL/20-mL syringes were analyzed.

The slow-pull technique may increase the cytological diagnostic accuracy and sensitivity with slight blood contamination during EUS-FNA when using 22-gauge needles for solid pancreatic masses.

Core tip: Endoscopic ultrasound-guided fine-needle aspiration (EUS-FNA) is an essential technique for obtaining tissue diagnoses for pancreatic masses, and application of suction is one of the potential influencing factors of EUS-FNA. The slow-pull technique has recently emerged as a new sampling technique in EUS-FNA of pancreatic masses. We found that the slow-pull technique using 22-gauge needles may increase the cytological diagnostic accuracy and sensitivity and result in only slight blood contamination in EUS-FNA of pancreatic solid lesions.

Endoscopic ultrasound-guided fine-needle aspiration (EUS-FNA) was first reported in 1992 and currently is applied as an essential technique to obtain tissue diagnoses for pancreatic masses[1-3]. A recent meta-analysis study concluded that the pooled sensibility and specificity of pancreatic EUS-FNA were 86.8% and 95.8%, respectively[4]. Although the diagnostic accuracy is generally high, the optimal method for EUS-FNA has not been established. Various factors are potential influencing factors, such as the experience of the endosonographer, the size and location of the target lesion, the size and type of needle, the presence of a stylet, the application of suction, and the availability of onsite cytopathology[5-7].

Application of suction during EUS-FNA has been controversial because it may result in damage to the cell structure and contamination of the blood while increasing cell quantity[8-10]. Different levels of negative pressure were applied to seek a balanced point between specimen quantity and quality. Some studies suggested that low or no suction reduced the contamination from blood and improved specimen quality[11-15]. Some suggested that high negative pressure obtained more tissue specimens for histological examination and improved diagnostic accuracy[16,17]. However, there is no consensus on the optimal suction technique. The slow-pull technique has been recently introduced as a new sampling technique in EUS-FNA of pancreatic solid lesions[18,19]. Different from conventional suction techniques using a syringe, the slow-pull technique provides minimum negative pressure by removing the stylet from the needle slowly and continuously[20]. Several studies have found that the slow-pull technique could obtain high-quality specimens with unsubstantial blood contamination when combined with a novel core biopsy needle (EchoTip ProCore, Cook Medical, Bloomington, IN, United States)[21-23]. These studies mainly focused on the biopsy needles; however, regular needles, such as 22-gauge needles, and cytological examinations are more frequently used in most institutions.

We retrospectively analyzed all patients who underwent EUS-FNA for solid pancreatic lesions at our institution between July 2010 and December 2015. Inclusion criteria were as follows: primary pancreatic solid lesions, usage of 22-gauge needles, application of cytological examination, and a ≥ 6-mo radiologic or clinical follow-up in patients diagnosed with benign lesions. Exclusion criteria were as follows: pancreatic cystic lesion or extra-pancreatic lesion, usage of 19-gauge or other needles, combination use of different suction techniques, and lack of follow-up data. This study was conducted in accordance with the Declaration of Helsinki.

All procedures were performed by one of two experienced endosonographers. Patients were conscious but sedated with intravenous propofol or a combination of intravenous meperidine and diazepam in the left lateral position. A curved linear array echoendoscope (EG-530UR; Fujinon Medical Systems, or GF-UE260; Olympus Medical Systems) was used to assess the pancreatic lesion. Once an optimal puncture route was determined, EUS-FNA was then performed with a curvilinear echoendoscope (EG-530UT; Fujinon Medical Systems, or GF-UCT260; Olympus Medical Systems) and a 22-gauge needle (Echotip Ultra; Wilson-Cook, Tokyo, Japan, or Expect; Boston Scientific, Natick, MA, United States); the stylet was inserted into the target lesion guided by real-time EUS imaging. In the slow-pull technique, the stylet was slowly withdrawn from the needle while 10-20 to-and-fro movements within the target lesion were performed. In conventional suction techniques, the stylet is completely removed before suction using a 5-mL/10-mL/20-mL syringe that is applied while 10-20 to-and-fro movements are performed within the target lesion.

After EUS-FNA, the aspirated material was completely expelled onto glass slides by reinsertion of the stylet and flushing with air. The aspirated materials were smeared on glass slides and fixed in an absolute alcohol solution for cytological examinations. Smeared slides were prepared by endosonographers trained in the appropriate slide preparation techniques. No on-site cytopathology examination was performed at our institution. EUS-FNA diagnosis was based on cytological examination.

All cytological reports were retrospectively reviewed. Diagnosis of cytological examination was recorded in reports and categorized into the following five groups: benign or negative for malignant, atypical, suspicious for malignant, malignant, and inadequate for diagnosis. Cytological specimens were characterized for cellularity and bloodiness, and the semiquantitative scores were routinely recorded in the pathological reports. Cellularity was graded into 4 levels: 0, none; 1, few aggregates; 2, fair cellularity; 3, abundant cellularity. All types of cells, including tumor cells, were calculated in the cellularity scores. The contamination from blood was also graded in 4 levels: 0, none; 1, little; 2, moderate; 3, abundant.

The composite standard for each lesion was based on the EUS-FNA diagnosis, surgical pathology and a clinical/imaging follow-up. Lesions were considered benign if surgical pathology confirmed a benign condition or if a lack of deterioration was noted on a ≥ 6-mo follow-up. Lesions were considered malignant if surgical pathological diagnosis or EUS-FNA diagnosis (based on cytological examination with a compatible clinical course) was positive for malignancy or if there was clinical progression or an increase in the lesion size (or both) during follow-up.

From July 2010 to December 2015, 139 patients underwent EUS-FNA for pancreatic lesions. A total of 37 patients were excluded: 9 patients with a pancreatic cystic lesion, 9 patients on whom a 19-gauge needle was used, 1 patient on whom a 25-gauge needle was used, 16 patients on whom combinations of different suction techniques were used, and 2 patients who were not followed-up. Finally, 102 patients with pancreatic solid lesions were included. The baseline characteristics and final diagnoses are listed in Table 1. The final diagnoses were malignant in 58 cases (56.9%) and benign in 44 cases (43.1%). Final diagnoses were confirmed from EUS-FNA specimens for 19 cases and surgically resected specimens for 30 cases; the remaining 53 cases were confirmed from the radiologic or clinical follow-up. The mean follow-up was 12 months (range: 1-24 mo). Of the 102 procedures, adverse events occurred in 6 cases (5.88%). Four patients developed mild pancreatitis, and 2 patients developed fever, but all of these adverse events were successfully treated with conservative therapy.

Cytological examinations were performed in all procedures. Of these cases, 61 were diagnosed as benign lesions, 19 as malignant lesions, 10 as atypical lesions, and 7 as suspicious lesions. The remaining 5 cases were inadequate for diagnosis: 3 of which were eventually confirmed as malignant masses from surgically resected specimens, and 2 were confirmed as benign masses from clinical follow-up. Of all of the EUS-FNA procedures, the slow-pull technique and suction techniques with 5-mL/10-mL/20-mL syringes were used in 31, 19, 34 and 18 procedures, respectively. There were no significant differences between these four suction techniques in terms of patient age, sex, endoscopists, lesion location, and number of passes; only tumor size showed a significant difference (P = 0.031) (Table 2). 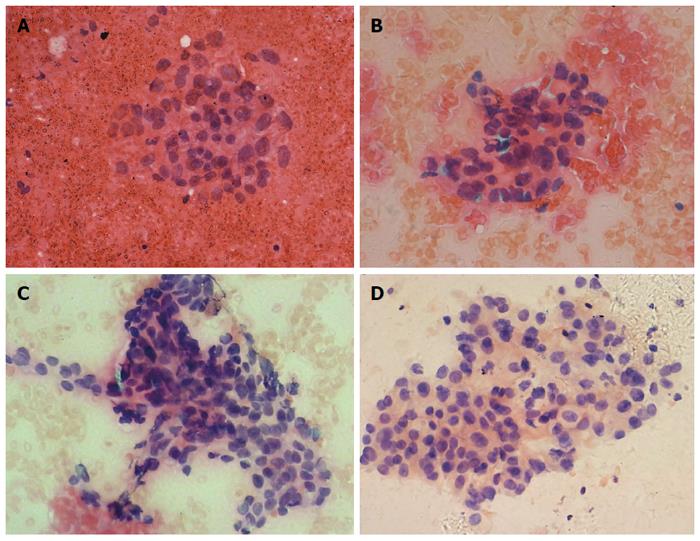 There is still some dispute regarding the role of suction during EUS-FNA. Generally, the suction technique with a 10-mL syringe is used to increase the specimen cellularity. However, this procedure may also increase the risk of blood contamination and structural damage. The value of suction in EUS-FNA was first evaluated for lymph node sampling. In an experimental study, Bhutani et al[11] found that continuous suction with smaller syringes (5-10 mL) provided optimal cellularity and better specimen quality in EUS-FNA of mediastinal lymph nodes. Subsequently, Wallace et al[12] performed a randomized controlled trial comparing sampling techniques with or without suction in EUS-FNA of lymph nodes and concluded that the technique with suction increased the cellularity but worsened the specimen bloodiness. Different from lymph nodes, pancreatic lesions are rich in fibrous tissue, with fewer parenchymal cells, which increases the complexity and difficulty involved in obtaining a precise diagnosis for pancreatic lesions[24-26]. Therefore, the European Society of Gastrointestinal Endoscopy technical guideline recommended using suction for EUS-FNA of solid masses/cystic lesions but not for EUS-FNA of lymph nodes[27]. However, in a recent randomized controlled trial, Lee et al[28] found that using suction during EUS-FNA worsened specimen bloodiness, while the diagnostic yield and cellularity were improved.

There were some limitations in the present study. First, biases are inevitable in a retrospective analysis, and the lesion sizes were different in these four suction techniques. The lesion size associated with the slow-pull technique was smaller, which might affect the diagnostic accuracy. However, there was no significant difference in the cytological diagnostic accuracy between different lesion sizes. Moreover, suction techniques were still statistically significant factors in multivariate analysis after adjusting for tumor size. Second, on-site cytological evaluation was not available in our study, although it is beneficial for EUS-FNA[30,31]. On-site cytopathological evaluation could reduce the need for repeat punctures and could improve the specimen quality rate, but it could also prolong the procedure time and increase the working time of the pathologists. Therefore, many institutions, like ours, have not adopted on-site cytological evaluation[32-34].

In conclusion, our retrospective study showed that the slow-pull technique might increase the cytological diagnostic accuracy and sensitivity with slight blood contamination during EUS-FNA for solid pancreatic masses using 22-gauge needles. Additional studies should be performed with a prospective randomized design to better understand the efficacy of the slow-pull technique.

Endoscopic ultrasound-guided fine-needle aspiration (EUS-FNA) has become an essential technique to obtain tissue diagnoses for pancreatic masses. However, application of suction during EUS-FNA is controversial because it may result in damage to the cell structure and contamination of the blood while increasing cell quantity.

The slow-pull technique has recently been introduced as a new sampling technique in EUS-FNA of pancreatic solid lesions. In contrast to conventional suction techniques using a syringe, the slow-pull technique provides minimum negative pressure by slowly and continuously removing the stylet from the needle. Such a slight suction force may help obtain sufficient specimens with minimal blood contamination.

The study supports the idea that the slow-pull technique using 22-gauge needles may increase the cytological diagnostic accuracy and sensitivity, and result in only slight blood contamination in EUS-FNA of pancreatic solid lesions.

Slow-pull technique: A new sampling technique that can provide minimum negative pressure by slowly and continuously removing the stylet from the needle.