Ampullary adenoma is a common indication for endoscopic papillectomy. Ampullary neuroendocrine tumor (NET) is a rare disease for which complete surgical resection is the treatment of choice. However, because of the morbidity and mortality associated with surgical resection, endoscopic papillectomy is increasingly used in selected cases of low grade, with no metastasis and no invasion of the pancreatic or bile duct. Also, confirmed and complete endoscopic resection of ampullary NET accompanied by adenoma has not been reported to date. We report herein a rare case of an ampullary NET accompanied with adenoma, which was successfully and completely resected via endoscopic papillectomy. Prior to papillectomy, this case was diagnosed as an ampullary adenoma. 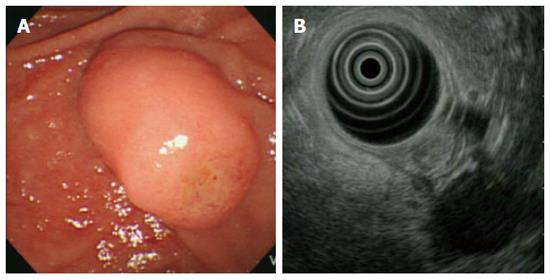 Figure 1 A duodenoscopic image showed an enlarged major papilla with central umbilication and fine nodularity on ampullary orifice (A), endoscopic ultrasonography at the major ampulla revealed a 1. 1 × 0.9-cm, slightly hypoechoic round ampullary mass confined to the submucosa without definite wall disruption or adjacent invasion (B).

Based on pathology and an imaging study, we planned endoscopic papillectomy for the removal of unexposed ampullary adenoma. Following submucosal injection of 1:10000 diluted epinephrine, snaring papillectomy was performed. However, primary complete resection of major papilla was not achieved. Following the first papillectomy, a remnant, whitish, round mass-like lesion was seen to protrude, and was difficult to differentiate from remnant tumor or a second combined tumor. Therefore, subsequently a second resection was performed successfully in the same manner as the first. An endoscopic image acquired immediately following the two-step papillectomy showed complete resection without complications. Resected tissues showed a papillary roof lesion and a whitish, round, mass-like lesion (Figure 2). Insertion of a prophylactic pancreatic stent failed due to technical difficulties with selective pancreatic duct cannulation. Due to the risk of post-procedure pancreatitis, the number of attempts to cannulate the pancreatic duct was not permitted to exceed five. Post-endoscopic retrograde cholangiopancreatography (ERCP) pancreatitis did not occur. 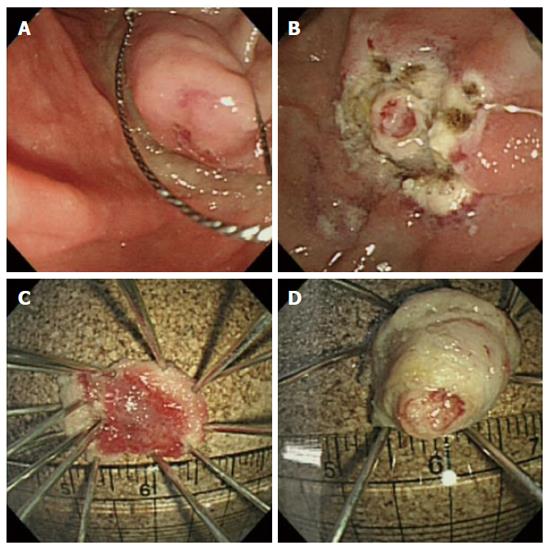 Figure 2 Endoscopic papillectomy. Following submucosal injection of 1:10000 diluted epinephrine, snaring papillectomy was performed (A), finally papillectomy induced ulceration is noted without complications (B), following the first papillectomy, a resected papillary roof is noted (C), A whitish and round mass-like lesion was resected by a subsequent second papillectomy (D). 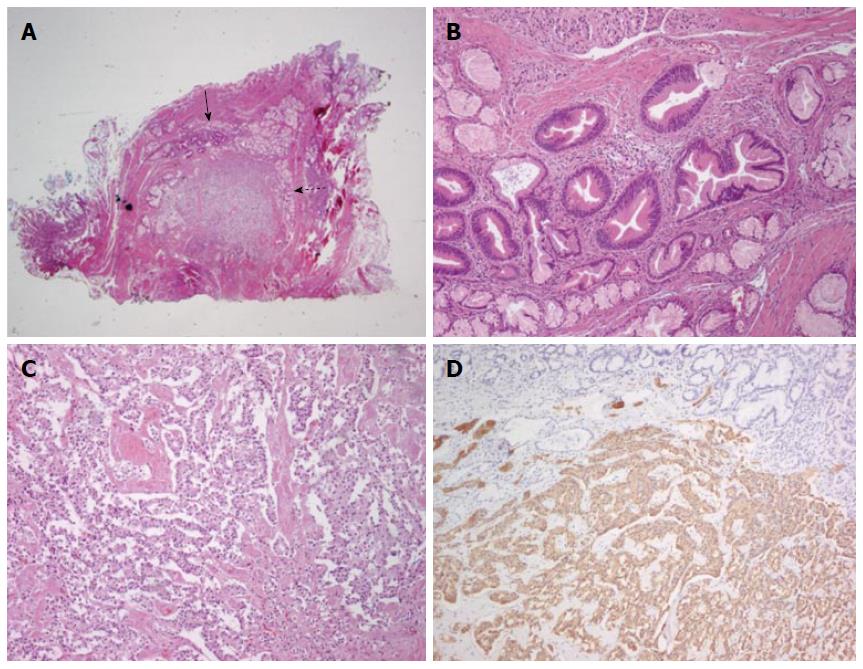 Follow-up endoscopic biopsy of the papillectomy site performed one and three month later did not show remnant tumor except reepithelization (Figure 4). No local recurrence or metastasis of NET or adenoma was detected during 24 mo of follow-up. 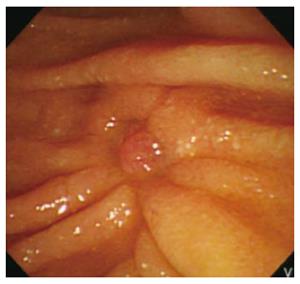 NET of the ampulla of Vater, formerly known as carcinoid tumors, is extremely rare. It accounts for only about 0.3%-1% of all gastrointestinal NETs, and less than 2% of all periampullary cancers. The natural history of this disease entity has not been well established[2,9-11]. Well-differentiated (low and intermediate grade) NETs have been variously termed carcinoid tumor (typical and atypical), neuroendocrine tumor (grade 1 and 2), or neuroendocrine carcinoma (low and intermediate grade). The previously used term, carcinoids of the ampulla of Vater, comprises a broad spectrum of morphologically and biologically diverse tumors. In the latest World Health Organization classification, published in 2010, it is recommended to distinguish between (1) neuroendocrine neoplasm, grade 1 (low grade); (2) neuroendocrine neoplasm, grade 2 (intermediate grade); and (3) neuroendocrine carcinoma, grade 3 (high grade)[6].

The diagnosis of ampullary NET is challenging till now. This tumor frequently originates from the deep mucosa or submucosa, so that cannot easily be detected in biopsy specimens. Most reports describe such lesions as a round or oval mass, with intact overlying duodenal mucosa, with negative biopsies. Also, early lymphatic metastasis is possible despite the small size of the lesions, and an accurate diagnosis is difficult[4,12]. Accuracy rates of biopsy for the preoperative diagnosis of NET range from to 14% to 66%[3,4,13]. Duodenoscopy in combination with ERCP is the diagnostic method of choice for deeper biopsies with the aim of identifying intrapapillary lesions. EUS, CT or magnetic resonance imaging (MRI) are used for staging and differential diagnosis, together with detection of invasion of the bile or pancreatic duct and metastasis to lymph nodes or other organs[4].

Clinically, NET can cause carcinoid syndrome, which presents as diarrhea or facial flushing, due to increased secretion of serotonin. However, carcinoid syndrome in ampullary NET is rare and the clinical and laboratory findings typical of carcinoid syndrome are frequently absent[14]. Anatomically, ampullary NET develops at the conjugation of the pancreatic and biliary ducts. Jaundice is the predominant symptom (53%) at the time of admission to hospital, followed by pain (24.6%), acute pancreatitis (6%) and weight loss (3.7%)[4,15]. The case presented herein exhibited no specific symptoms due to the tumour, with the exception of mild dyspepsia.

The treatment of choice for NET is complete resection. Metastasis is rare, particularly in ampullary NETs. Therefore, complete resection is required as the primary therapy[1,4,16]. In terms of prognosis, the 5-year survival rate of completely resected NET exceeds 95%[1]. The classical partial pancreaticoduodenectomy (Kausch-Whipple operation) or pylorus-preserving pancreaticoduodenectomy (PPPD) are considered the treatments of choice for ampullary NETs > 2.0 cm in diameter. The mortality and morbidity rates for the two approaches are less than 5% and 15%, respectively[4,17]. Alternatively, in patients with multiple comorbidities or elderly individuals, conservative treatment or minimally invasive endoscopic papillectomy should be considered[5,7]. Local excision may be an option for the treatment of ampullary NET, if the tumor is small and there is no evidence of regional lymph node or distant metastasis. Compared to local surgical excision, endoscopic papillectomy may be less harmful to the patient and reduce the hospital stay duration, and complete resection is possible in selected patients. Similar to the management of an ampullary adenoma, endoscopic papillectomy may be a reasonable alternative to surgical resection[7]. When endoscopic papillectomy is decided upon, the differentiation of NET, tumor size, and lymph node metastasis should be considered. Endoscopic papillectomy may be a good alternative in highly differentiated tumours that do not infiltrate the muscularis, tumors < 2 cm in size, and with no distant metastasis. The prognosis is reported to be excellent, with an overall 5-year survival rate of 90%[15].

This presented case was diagnosed initially as an ampullary adenoma (low grade) by endoscopic biopsy during screening endoscopy. Following endoscopic papillectomy for removal of adenoma, the lesion was diagnosed as NET, grade 1 (< 2 mitoses/10 HPF and < 3% Ki67 index) accompanied by low-grade adenoma. Pathologically deep resection margin was not clear for the tumor; however, no evidence of local or distant metastasis was detected by repeated biopsies and radiologic examination during 24 mo of follow-up. Surgical resection was not performed due to successful complete endoscopic resection and imaging studies did not show lymph node or distant metastasis.

To the best of our knowledge, this is the first reported case of endoscopic papillectomy for ampullary NET accompanied by adenoma in the English-language literature. Some cases of ampullary small cell neuroendocrine carcinoma associated with or mixed with adenoma, adenocarcinoma and squamous cell carcinoma have been reported[18-20]. However, pancreaticoduodenectoy were performed in all of the above mentioned cases due to a carcinomatous change. Until now, there is a hypothesis that two different types of tumors arise from common progenitor cell and differentiate different[21,22]. In the case of low grade neuroendocrine tumor with adenoma, the low grade neuroendocrine tumor had good prognosis and no death and no lymph node metastasis were found[23]. However, since the study is with regard to lesion of duodenum and colorectum, further study in necessary to examine a prognosis of adenoma and low grade neuroendocrine tumor confined to ampulla of Vater.

In conclusion, low-grade ampullary adenoma is a common indication for endoscopic papillectomy. Indeed, well-differentiated ampullary NET may be also a good candidate for complete endoscopic resection in selected indications. Even though combined case such as a presented case, may be completely resected by endoscopic papillectomy. The clinical or pathological correlation between NET and adenoma is unclear. Further clinical follow-up is needed to confirm the long term clinical outcome or these combined cases.

Based on endoscopic finding and given pathology, clinically the authors diagnosed an unexposed ampullary adenoma.

Unexposed adenocarcinoma arising from the ampulla of Vater.

A duodenoscopic image showed an enlarged major papilla with central umbilication and fine nodularity. Endoscopic ultrasonography (EUS) at the major ampulla revealed a 1.1 × 0.9-cm, slightly hypoechoic round ampullary mass confined to the submucosa.

Some cases of ampullary small cell neuroendocrine carcinoma associated with or mixed with adenoma, adenocarcinoma and squamous cell carcinoma have been reported, however these cases were managed by surgical resection.

Well-differentiated ampullary NET may be a good candidate for complete endoscopic papillectomy in selected indications even though combined case such as an adenoma.

This case report is worthy because of the rarity of the NET in ampulla of Vater accompanied by tubular adenoma treated with endoscopic papillectomy.