CONCLUSION: F. nucleatum was enriched in CRC tissues and associated with CRC development and metastasis.

Core tip: In this study, we demonstrated that Fusobacterium nucleatum (F. nucleatum) was significantly enriched in resected colorectal cancer (CRC) compared with adjacent normal tissues. F. nucleatum infection was associated with CRC development and metastasis. Our results were consistent with two previous reports. To our knowledge, this is the first report on the relationship between F. nucleatum and CRC in Chinese patients.

Colorectal cancer (CRC) ranks as the third most common cancer and the second most common cause of cancer-related mortality worldwide[1]. The etiology of CRC is still not fully understood. As a huge number of microbial communities are continuously colonized in the gut, some harmful microbiota may play roles in the development of CRC[2,3]. Likewise, the link of some pathogens to cancers, e.g., Helicobacter pylori to gastric cancer, human papilloma virus to cervical cancer, and hepatitis B and C virus to hepatocellular carcinoma, has been completely established. These infections are in charge of 18% of cancers[4]. Although the precise mechanisms of the carcinogenesis remain unclear, it is rational to reduce the risk of these cancers by targeting the pathogens. Efforts have been made to explore the possible pathogens involved in CRC development. Once they are identified, it would lead to a breakthrough in the prevention and treatment of CRC.

Fusobacterium nucleatum (F. nucleatum) is an anaerobic oral commensal. Besides periodontal disease, it has been documented to be involved in a wide spectrum of disorders, including gastrointestinal diseases, respiratory tract infections, cardiovascular diseases, rheumatoid arthritis, Lemierre’s syndrome, and Alzheimer’s disease[5]. Currently, accumulating evidence has indicated that a larger number of Fusobacterium spp., especially F. nucleatum, is present in tumor tissues and stool samples of CRC patients versus normal controls. A limited number of studies have suggested a positive association of F. nucleatum with CRC invasiveness, e.g., lymph node metastasis, but the finding has not been confirmed[6,7]. In the present study, we applied fluorescent quantitative polymerase chain reaction (FQ-PCR) and fluorescence in situ hybridization (FISH) to observe the presence of F. nucleatum in CRC tissues and to explore the clinical correlation of F. nucleatum to CRC invasiveness in Chinese patients.

In total, 101 consecutive patients with histologically confirmed colorectal adenocarcinoma (males 55 and females 46, age range 36-82 years) undergoing surgical resections at the Department of General Surgery of Guangzhou First People’s Hospital between November 2012 and November 2013 were recruited. The patients who had colorectal tumors other than adenocarcinoma, who received chemotherapy or radiotherapy before operation, and who had comorbid malignancies from other organs were excluded. Fresh CRC and adjacent non-tumor tissues (10 cm beyond cancer margins) from each subject were collected. Samples were snap frozen in liquid nitrogen and then stored at -80 °C until use. Samples for histological and FISH examination were fixed in 10% formalin and embedded in paraffin. The stages of CRC were assigned according to TNM and Dukes grades[8]. All 101 patients were enrolled into the FQ-PCR study, among which 22 patients with the highest F. nucleatum abundance by FQ-PCR testing were included in microbial FISH examination.

The study protocols complied with the Declaration of Helsinki and were approved by the ethics committee of Guangzhou First People’s Hospital affiliated to Guangzhou Medical University. Written consent was obtained from each participant.

FISH was performed with FISH pharmDx kit (Abbott Vysis Laboratories, Abbott Park, IL, United States) on 22 pair sections of CRC and matched non-cancerous tissues, which were formalin-fixed and paraffin-embedded. Cell nuclei were stained with DAPI. An Oregon-Green 488-conjugated ‘‘universal bacterial’’ probe (EUB338, pB-00159, green) binding 16s rRNA gene at bacterial conserved regions and a Cy3-conjugated Fusobacterium probe (FUSO, pB-0078, red) binding 16s rRNA gene at Fusobacterium specific regions were applied. The sequences of the probes were referred to probeBase (http://www.microbial-ecology.net/probebase/)[12,13]. Probe hybridization was performed at the following conditions: probe concentration 10 μL (5 ng/μL), denaturation at 75 °C for 5 min and hybridization at 37 °C for 18 h. Slides were imaged on a microscope (Carl Zeiss, Oberkochen, Germany), and the number of F. nucleatum was counted. Five random × 40 fields were chosen for evaluation by two pathologists blind to tumor/normal status. The selection criteria of mucosal tissue depth were used, and a minimum of five bacteria visualized by the EUB338 probe per field was required. 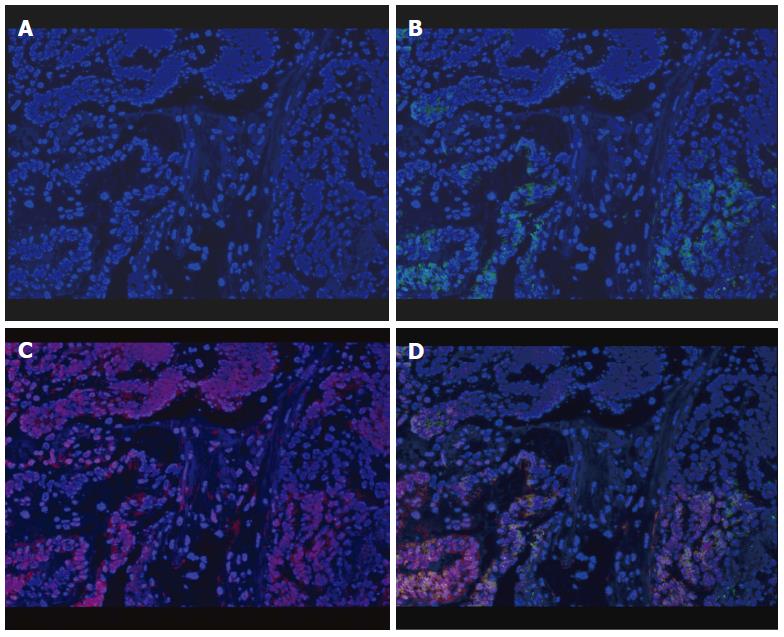 The human gastrointestinal lumen is harbored by more than 1000 species of microorganisms, which bring about beneficial and deleterious effects on the host. High abundance of Enterococcus, Escherichia/Shigella, Klebsiella, Streptococcus, Peptostreptococcus, Bacteroides-Prevotella, and low abundance of Lach-nospiraceae/Roseburia, clostridia have been found in the gut compartment of CRC patients compared with normal controls[14-17]. For a long time, it has been believed that the dysbiosis in the gut results in a variety of colorectal diseases, including CRC, but no specific bacterium has been confirmed[14-17]. Recently, sequence-based investigations have provided us much valuable information in this field. In 2012, two North American studies published in Genome Research declared that a periodontal pathogen, i.e., F. nucleatum, was overabundant in CRC tissues. Using a whole-genome sequencing technique, Kostic et al[18] identified the enrichment of DNA sequences of Fusobacterium spp. in CRC compared with control samples. Among them, F. nucleatum was the most dominant phylotype. Using RNA-sequencing approaches, Castellarin et al[7] also observed a large amount of Fusobacterium spp. in CRC versus normal tissues. In addition, they found a positive association of F. nucleatum over-abundance with lymph node metastasis. Afterwards, several studies confirmed overload of F. nucleatum in CRC tissues[3,6,19,20]. Currently, two studies revealed F. nucleatum to be a poor prognostic factor of CRC patients. Using molecular pathological epidemiology database of 1069 CRC patients, Mima et al[21] revealed a link between high F. nucleatum DNA load in CRC tissue and shorter survival of patients. Flanagan et al[6] found a significantly longer survival time in CRC patients with low F. nucleatum levels than those with moderate and high levels.

A persuasive interpretation of the above data is an important issue. Firstly, is F. nucleatum a cause or a consequence of CRC? So far, increasing evidence is in favor of the “cause” hypothesis, as emerging data have demonstrated that F. nucleatum at first induced precancerous lesions (e.g., hyperplastic polyps and adenomas), which eventually progressed to CRC[6,10,22,23]. In addition, a number of pathogenetic studies supported the carcinogenic roles of F. nucleatum. As the mucosa adherent bacteria, F. nucleatum had ability to adhere to and invade epithelial cell[7,23-26]. F. nucleatum shuttled non-invasive bacteria, in particular Campylobacter spp. and Streptococcus into the host cell as mixed species synergism[27]. By binding to E-cadherin on the epithelial cell, F. nucleatum stimulated FadA, which activated β-catenin signaling pathways and up-regulated oncogene expression[17]. F. nucleatum induced inflammation by releasing RNA into the host cell and activating nuclear factor kappa B[17]. F. nucleatum increases cytokines, in particular tumor necrosis factor-α and interleukin (IL)-10[20]. F. nucleatum induced a number of pathogenesis-related events, including CpG island methylator phenotype (CIMP), microsatellite instability (MSI), and genetic mutations in BRAF, KRAS, TP53, CHD7, and CHD8[28]. F. nucleatum reduced CD3+ T cell density in CRC tissues[29]. F. nucleatum regulated the tumor immune microenvironment through E-cadherin/β-catenin signaling[30]. Secondly, are gut microbiota other than F. nucleatum also enriched in CRC tissues and do they enhance CRC invasiveness? In our ongoing study, the five most suspected bacteria related to CRC in literature[14-17,31] were quantified in the same CRC population. F. nucleatum, Enterotoxigenic Bacteroides fragilis (ETBF), and Enterococcus faecalis (E. faecalis) were significantly enriched in CRC compared to the matched non-cancerous tissues, while no difference were found in enteropathogenic Escherichia coli and Streptococcus gallolyticus (S. gallolyticus). The positive rate of F. nucleatum overload (87.13%) was much higher than those of ETBF (61.67%) and E. faecalis (55.04%) (unpublished data). Our study was consistent with a recent cohort enrolling six bacteria, which demonstrated that F. nucleatum was the only bacterium significantly overabundant in CRC compared with normal tissues, and F. nucleatum and ETBF were associated with the clinicopathological features of patients[31]. Based on above observations, we infer that F. nucelatum is specifically enriched in CRC and enhances CRC invasiveness.

Recently, the emerging science of molecular pathways has shed light on the pathogenesis of CRC. MSI, chromosomal instability, and CIMP are common genetic changes, while microRNAs, DNA methylation, and histone modifications are analyzed in epigenesis. Interactions between genetic and epigenetic factors are involved in the carcinogenesis of F. nucleatums[32-34]. Environmental risk factors, e.g., changes in diet and lifestyle, may affect nuclear receptors on the gut microbiota and induce carcinogenesis through molecular pathways[35]. Furthermore, molecular pathological epidemiology (MPE), a multidisciplinary investigation into the relationship among genetic factors, molecular signatures, and disease progression, provides insights into the pathogenetic process as well as therapeutic optimization[35-37]. Using a MPE database of 1069 CRC patients, Mima et al[21] successfully uncovered the association of F. nucleatum DNA load with the prognosis of patients.

There are a few limitations of this study. Firstly, we have not used the innovative concept of molecular sciences to design the study. Secondly, we have not included more intestinal bacterial species in addition to F. nucleatum. On the whole, our results still reflected the main features in Chinese people. Further larger studies are needed to examine these findings.

In conclusion, our results demonstrated that F. nucleatum was enriched in CRC tissue, and F. nucleatum abundance was positively associated with lymph node metastasis of CRC patients. There were no geographical and ethnic differences in the association. To our knowledge, this is the first report of its kind in Chinese patients.

Increasing evidence suggests that Fusobacterium nucleatum (F. nucleatum) infection in the colon plays a role in the pathogenesis of colorectal cancer (CRC). The clinical correlation of F. nucleatum load with CRC progression has not been fully established, especially in Chinese patients.

This study investigated the relationship between F. nucleatum infection and the presence of CRC and the association of F. nucleatum abundance with CRC invasiveness in Chinese patients.

In this study, the authors demonstrate that F. nucleatum is significantly enriched in CRC tissues from surgical resections compared with adjacent normal tissues. F. nucleatum abundance is associated with CRC metastasis. These results are consistent with previous reports and confirm that there is no geographical and ethnic difference in the association. This is the first report of this important data in Chinese patients.

As F. nucleatum is identified as a pathogen of CRC, it may be a new drug target for the future prevention and treatment of CRC.

CRC is one of most common cancers worldwide. The etiology of CRC is still not fully understood. F. nucleatum is an anaerobic oral commensal. Currently, increasing evidence suggests that F. nucleatum is involved in a wide spectrum of illness, including CRC. Fluorescent quantitative polymerase chain reaction and fluorescence in situ hybridization are laboratory techniques commonly used in practice.

The authors of this study have investigated the relationship between F. nucleatum infection with colorectal cancer in Chinese patients.