Research Domain of This Article
Research and Experimental Medicine

CONCLUSION: Gastric macrophages contribute to the pathogenesis of gastric injury in SAP. Clodronate-containing liposomes have protective effects against AGMI in rats with SAP.

Core tip: In this study, we investigated the protective effect of clodronate liposomes against severe acute pancreatitis (SAP)-triggered acute gastric mucosal injury in rats. Our results revealed that gastric macrophages are involved in the pathogenesis of gastric injury in SAP. Moreover, clodronate-containing liposomes have protective effects against gastric mucosal injury in rats with SAP. Therefore, the blockade of macrophage infiltration may represent a novel therapeutic strategy for the treatment of SAP.

Severe acute pancreatitis (SAP) is often complicated by systemic inflammatory response syndrome (SIRS), eventually leading to dysfunction of multiple organs, including the liver, lungs, kidneys, intestine, and stomach[1-4]. Up to 50% of patients with SAP may have stress-related acute gastric mucosal injury (AGMI)[5]. Despite intensive research and clinical investigations, the pathogenesis of AGMI induced by SAP remains unclear. SAP-induced AGMI may be associated with ischemic reperfusion injury, excessive release of inflammatory mediators, microcirculatory disturbance, and oxidative stress[6-11].

In this study, we investigated the effect of clodronate-containing liposomes on AGMI. Our results provide the basis for a new strategy for SAP treatment.

MATERIALS AND METHODS
Materials and reagents

Clodronate and phosphate-buffered saline (PBS) (control) liposomes were prepared by reverse-phase evaporation, as described previously[20]. The suspensions were stored in an inert atmosphere of nitrogen until use. The concentration of encapsulated clodronate was determined using an ultraviolet spectrophotometer. The liposomes were dissolved in 4 mL of sterilized PBS (5 mg/mL). The suspension was shaken gently before administration (dosage, 20 mg/kg) to the rats, as described by Brigham et al[22] and Zhang et al[23].

The rats were housed in individual cages maintained at 21-23 °C and 60% ± 10% humidity. The rats were acclimatized for 1 wk before commencement of any experimental procedure, and allowed access to standard rat chow and water. All animal experiments were conducted in compliance with the guidelines specified by the Institutional Ethics Board. The rats were randomly divided into three groups: C group (control), P group (SAP + PBS-liposome), and T group (SAP + clodronate-liposome). These groups were further divided into two subgroups each: 2 h and 6 h (n = 8 in each group). The rat model with SAP was established by injecting sodium taurocholate (2 mL/kg body weight) into the pancreatic subcapsular space. PBS-containing liposomes (2 mL/kg body weight) were injected into the rats of the P group very slowly through the tail vein. Similarly, clodronate-containing liposomes were injected into the T-group rats, and normal saline into the C-group rats. At 2 and 6 h after the injections, the animals were sacrificed and the gastric mucosa and pancreas were harvested. No mortalities were observed at 2 and 6 h.

To assess the TNF-α level, blood was collected from the superior mesenteric vein. Serum TNF-α level was estimated using an ELISA kit. The data were expressed as pg/mL.

Pancreatic and gastric tissue samples (4-μm thick) were fixed in 10% buffered formalin for 24 h. The paraffin-embedded tissue sections were then stained with hematoxylin and eosin (HE), and observed by a morphologist who was blinded to the experiments. The pancreatic pathological score was determined according to Kaiser’s scoring criteria[24]. The degree of pathological injury was assessed under a light microscope (each sample was blindly evaluated by a pathologist). The degree of gastric mucosa injury was scored according to the Masuda criteria[25], with slight modifications, as follows: normal, 0; injury in the surface epithelium, 1; congestion and edema in the upper mucosa, 2; congestion, hemorrhage, and edema in the middle and lower mucosa, 3; structural disorder or necrosis in the upper mucosal glands, 4; and deep necrosis and ulceration, 5. The average injury score for each rat was calculated from 10 random fields.

Apoptosis of the tissue samples was detected by TUNEL staining according to the manufacturer’s protocol. Data were presented as the average results of three sections per tissue per rat.

Immunohistochemistry for macrophage marker (CD68) in the gastric mucosa

The Statistical Product and Service Solutions software (version 19.0) was used for the analyses. All values were reported as the mean ± SD. One-way analysis of variance was performed in cases where equal variance was assumed. Otherwise, a nonparametric test (Kruskal-Wallis test) was used. AGMI grading was analyzed using the Mann-Whitney U test. A P value less than 0.05 was considered statistically significant.

The spherical and mainly unilamellar liposomes had similar size distributions, as assessed by transmission electron microscopy (TEM). The liposomes had a mean diameter of 150 ± 30 nm. The encapsulation yield of the liposomes was 26%.

Clodronate-containing liposomes protect the pancreas from damage caused by SAP

No significant changes were observed in the pancreas of the C group rats upon gross observation. Visible bloody ascites, pancreatic edema, hemorrhage, and necrosis were observed in the abdominal cavity of rats in the P group, and mild morphological changes in the pancreas, small amount of ascites, and visible pancreatic focal hemorrhage were observed in the T group. Microscopically, the rats in the C group showed normal pancreatic histology; the pancreas of the P-group rats were faintly edematous, with some inflammatory cell infiltration (at 2 h). Adipose tissue surrounding the pancreas, moderate hemorrhage, necrosis, and pancreatic acinar cells and tissues were also observed (at 6 h). The rats in the T group had mild pancreatic interstitial edema and neutrophil and mononuclear cell infiltration. However, no significant hemorrhage or necrosis was observed (Figure 1). The pancreatic histological scores were significantly different in the P and T groups, compared with the C group (2 h, 4.13 ± 0.83, 1.88 ± 0.83 vs 1 ± 0.53; 6 h, 6.25 ± 0.88, 2.87 ± 0.64 vs 1.25 ± 0.46, P < 0.01). The pathological change in the T group was less severe than that in the P group (2 h, 1.88 ± 0.83 vs 4.13 ± 0.83; 6 h, 2.87 ± 0.64 vs 6.25 ± 0.88, P < 0.01). 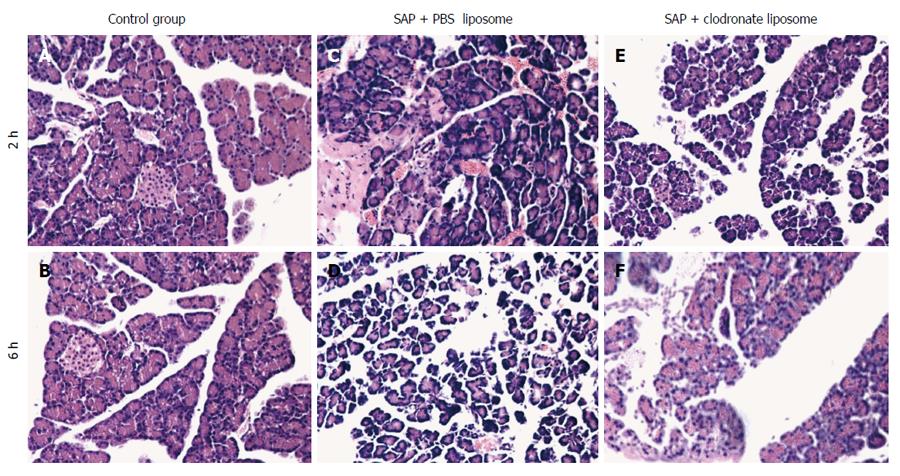 The mucosal surface of the C-group rats was smooth, with no significant abnormality, and the gastric mucosal glands were of consistent size and shape, and were neatly arranged in a single column. No inflammatory cell infiltration into the mucosal layer was detected. In the SAP group, extensive edema, leucocyte infiltration, and disoriented/asymmetrical gastric tubes were observed at 2 h after SAP induction. At 6 h, these pathological changes were even more pronounced. The T-group rats had reduced number of inflammatory cells in the gastric mucous layer, neatly arranged gastric glands, and mucus thickening, and showed recovery of glandular structure. The severity of the pathological scores in the P and T groups were significantly higher than that in the C group (2 h, 2 ± 0.75, 1.12 ± 0.64 vs 0.13 ± 0.35; 6 h, 3 ± 1.31, 1.58 ± 0.53 vs 0.25 ± 0.46, P < 0.05). The severity score of the P group was significantly higher than that of the T group (P < 0.05; Figure 2). 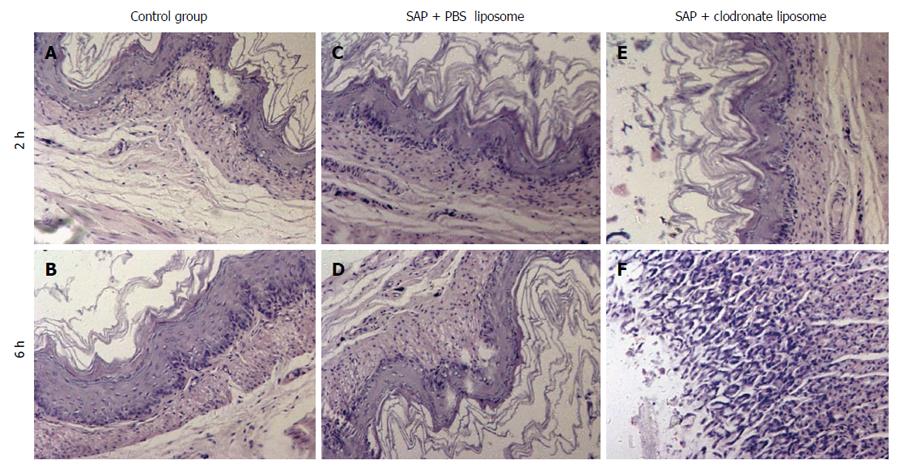 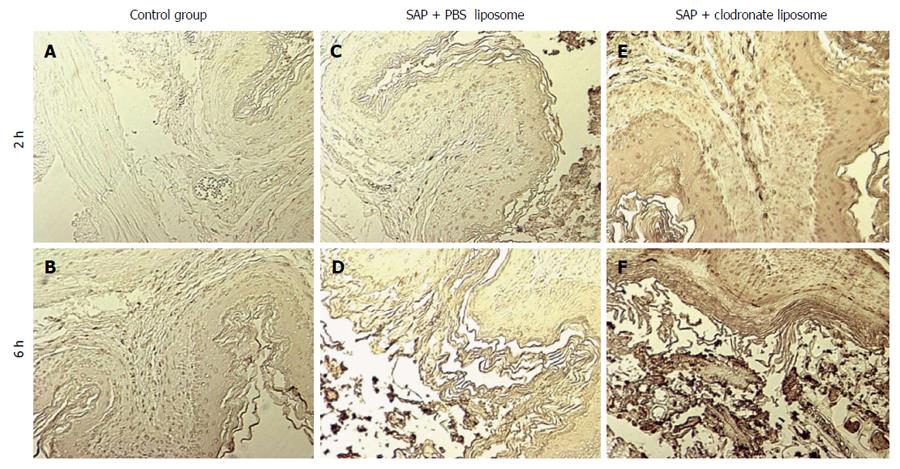 Figure 3 Terminal deoxynucleotidyl transferase dUTP nick end labeling analysis of apoptosis in each group. Apoptosis was not observed in the gastric mucosa of the C group (A, B); The apoptotic cell indices of the mucosal cells were higher in the T group (C, D) than in the P group (E, F), 2 and 6 h after induction of severe acute pancreatitis. Original magnification: × 200. SAP: Severe acute pancreatitis; PBS: Phosphate-buffered saline.
CD68 immunohistochemistry

Immunostaining for CD-68 revealed that the gastric tissue was under homeostatic conditions in the C group. Macrophage numbers were decreased in the gastric tissue sections obtained from the T group. Normal mucosa with basal levels of CD68 expression was observed in the C group. Intense staining of CD68-positive cells was observed in the muscularis, submucosa (muscularis mucosa), and mucosa layers of the stomach, particularly in the muscularis mucosa and the vascular system of the P-group rats. Clondronate administration significantly decreased the staining of CD68, particularly in the muscularis mucosa of the T group, compared with the P group (Figure 4). 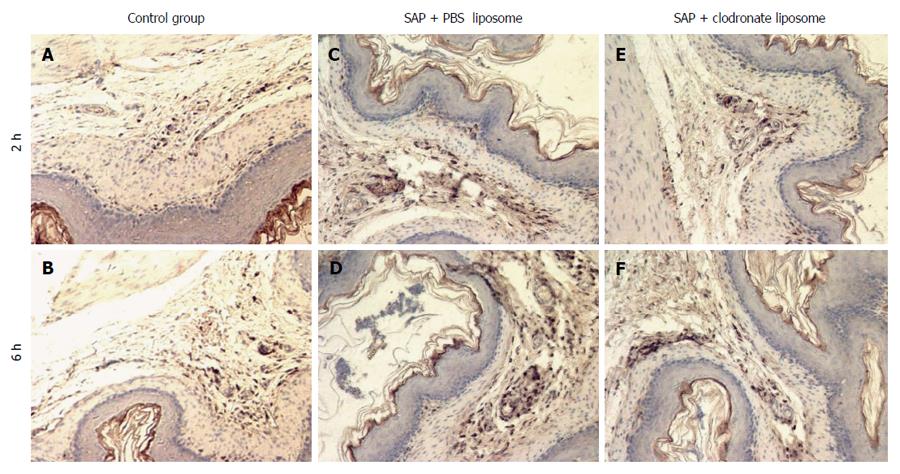 The results of the present study confirmed that SAP is associated with complications such as SIRS, MODS, AGMI, and local pathogenesis within the pancreas. SAP-induced pathological changes in the stomach worsen over time. Diffused microcirculatory disorders (MCDs) may play a key role in the development of AGMI. However, the underlying mechanism is still unknown. AGMI causes disturbance of microcirculation, which can damage the gastric mucosa and lead to vasoconstriction, shunting, leukocyte adherence, increased blood viscosity, and coagulation. Oxygen free radicals, ischemia-reperfusion injury, and various inflammatory mediators are the principal mediators of the transformation of AGMI from a local inflammatory process to a systemic illness. The excessive proinflammatory cytokine release associated with AGMI is responsible for the deterioration of local and systemic functions[10]. During the last decade, several studies have indicated that macrophages are the initial mediators of SAP, which eventually leads to multiple organ failure[26-29]. Therefore, treating SAP by depleting the infiltrating macrophages has attracted immense interest.

Mediators of inflammation, produced by macrophages, induce an inflammatory cascade, and cause gastric mucosal injury and gastric dysfunction. TNF-α, produced by macrophages, results in injury to multiple organs and causes inflammation, edema, ischemia, hemorrhage, and neutrophilic leucocytes accumulation. The neutrophilic leucocytes in turn secrete various pro-inflammatory factors[30,31]. At the early stage of SAP, interleukin (IL)-1β stimulates the expression of phospholipase A-1 (PLA-2), and triggers vascular migration of monocytes to the site of infection. MCD, nitrous oxide, and reactive oxygen species are crucial mediators of AGMI[32-34].

In this study, we investigated the possible contribution of gastric mucosal macrophages to the severity of induced SAP. TNF-α level was notably increased in the P group, and this increase was suppressed by clodronate in the T group rats (P < 0.01). Less severe gastric mucosal damage was observed in the T group compared with the P group (P < 0.01).

In conclusion, our study revealed that macrophages might be the main mediators of SAP-induced AGMI, and that depletion of macrophages can markedly reduce gastric inflammation.

Severe acute pancreatitis (SAP) is often associated with systemic inflammatory response syndrome, and eventually leads to dysfunction of multiple organs. Up to 50% of patients with SAP may have stress-related acute gastric mucosal injury. Recent studies have shown that activated macrophages secrete inflammatory factors that lead to systemic inflammatory response and eventually MODS, including gastric mucosal injury.

In this study, the authors demonstrated that SAP-induced inflammation is mediated by macrophage infiltration in the gastric mucosa, and treatment with clodronate depletes macrophages. The study provides the basis for a novel therapeutic strategy for the treatment of SAP.

In the present study, the authors examined whether liposomes containing clodronate could prevent the development of SAP-induced gastric mucosal injury by modulating the inflammatory process.

Clodronate belongs to the bisphosphonate family of drugs. Bisphosphonate clodronate could selectively inhibit the viability of macrophages by inducing apoptosis.

The manuscript is interesting and reports important data on acute pancreatitis. In the Discussion, the authors report that clodronate-containing liposomes induce apoptosis in macrophages.