AIM: To evaluate the efficacy and tolerance of FOLFIRI plus bevacizumab treatment outcome as second-line treatment for metastatic intrahepatic cholangiocarcinoma.

METHODS: Thirteen consecutive patients with metastatic intrahepatic cholangiocarcinoma who were refractory to first-line therapy consisting of gemcitabine plus oxaliplatin-based first-line chemotherapy given intravenously via intra-arterial infusion were treated with FOLFIRI [irinotecan (180 mg/m²i.v. over 90 min) concurrently with folinic acid (400 mg/m²i.v. over 120 min) followed by fluorouracil (400 mg/m²i.v. bolus) then fluorouracil 2400 mg/m² intravenous infusion over 46 h] and bevacizumab (5 mg/kg) every 2 wk. Tumor response was evaluated by computed tomography scan every 4 cycles.

RESULTS: The best tumor responses using response evaluation criteria in solid tumor criteria were: complete response for 1 patient, partial response for 4 patients, and stable disease for 6 patients after 6 mo of follow-up. The response rate was 38.4% (95%CI: 12.5-89) and the disease control rate was 84.5% (95%CI: 42-100). Seven deaths occurred at the time of analysis, progression free survival was 8 mo (95%CI: 7-16), and median overall survival was 20 mo (95%CI: 8-48). No grade 4 toxic events were observed. Four grade 3 hematological toxicities and one grade 3 digestive toxicity occurred. An adaptive reduction in chemotherapy dosage was required in 2 patients due to hematological toxicity, and a delay in chemotherapy cycles was required for 3 patients.

CONCLUSION: FOLFIRI plus bevacizumab combination treatment showed promising efficacy and safety as second-line treatment for metastatic intrahepatic cholangiocarcinoma after failure of the first-line treatment of gemcitabine plus oxaliplatin chemotherapy.

Core tip: This retrospective study tests the efficacy of FOLFIRI plus bevacizumab as second-line treatment for metastatic cholangiocarcinoma. We observed that this particular chemotherapy treatment gives good response rates and prolongs survival.

Biliary tract cancer is a collective term that groups together different tumors, including gallbladder tumor, cholangiocarcinoma, and ampulla of Vater tumor with a relative frequency of 41%, 42%, and 17%, respectively[1-3]. These tumors arise from the transformation of intrahepatic or extrahepatic bile duct epithelial cells. Cholangiocarcinoma is divided into 3 categories based on anatomic location of origin within the biliary system: intrahepatic, hilar, and distal extrahepatic canals. Upon epidemiological study, hilar tumors were more frequent; however intrahepatic tumor incidence is rising. The median survival for biliary tract cancer is poor, but very different for each subtype. Gallbladder cancer is more frequent in females, with a survival around 6-9 mo, while cholangiocarcinoma is more frequent in males and is also more aggressive, with a poor survival time of around 4-6 mo without therapy[1]. The only curative treatment is the complete surgical removal of the tumor. When the tumor can be removed by surgery, the 5 year survival rate is around 30%. When the tumor is not resectable, the standard treatment is systemic chemotherapy[4,5]. Recently, 2 phase III trials demonstrated that chemotherapy combining gemcitabine and platinum derivatives could be considered as a standard of care for unresectable cholangiocarcinoma and seems to improve overall survival, with a median survival of 12 mo for the cisplatin plus gemcitabine regimen[6] and 9.5 mo for the oxaliplatin plus gemcitabine regimen[7].

While the choice for first-line chemotherapy is largely agreed upon, second-line treatment is still a topic of discussion[8,9]. Very few studies of second-line chemotherapy for advanced biliary tract cancer have been reported, with all such studies pooling together patients with different types of biliary tract cancer with different prognoses. The role of targeted therapies is also under investigation in some trials[9,10]. In this study, we report on the tolerance and efficacy of the off-label usage of FOLFIRI plus bevacizumab combination as a second-line treatment in metastatic cholangiocarcinoma after failure of the gemcitabine plus oxaliplatin regimen.

This retrospective study was conducted at the Georges Francois Leclerc Center from January 2009 to January 2014. The proposal of the off-label usage of FOLFIRI bevacizumab was evaluated and validated by the local multidisciplinary staff. Informed consent was obtained from each participant and follow-up was prospectively registered. We proposed this treatment for patients with advanced biliary tract carcinoma who met the following criteria: (1) received gemcitabine plus oxaliplatin combination therapy as a first-line treatment administrated intravenously or by intra-arterial injection; (2) underwent progression during the first-line therapy; (3) had an Eastern Cooperative Oncology Group performance status of 0-2; and (4) had adequate bone marrow function (white blood cell count > 3000/mm3, hemoglobin > 9.0 g/dL, and platelet count > 100000/mm3), liver function [total bilirubin < 3 times the upper limit of normal (ULN) and aspartate/alanine transaminases < 5 times the ULN], and renal function (creatinine < 1.2 mg/dL or creatinine clearance > 50 mL/min). In patients with obstructive jaundice, total serum bilirubin was required to be within 3 times the ULN after biliary drainage. Exclusion criteria included: uncontrolled infection, uncontrolled massive pleural effusion or massive ascites, active ulcer of the gastrointestinal tract, pregnancy/lactation, a history of drug hypersensitivity, active concomitant malignancy, and concurrent severe medical conditions.

The FOLFIRI plus bevacizumab regimen consists of bevacizumab injection (5 mg/kg) followed by irinotecan (180 mg/m²i.v. over 90 min) concurrently with folinic acid (400 mg/m²i.v. over 120 min), followed by fluorouracil (400 mg/m²i.v. bolus) then fluorouracil (2400 mg/m² intravenous infusion over 46 h). Dose reductions were based on adverse events that were graded according to the Common Terminology Criteria for Adverse Events version 3.0. Treatment was temporarily suspended in cases of grade 3/4 hematological toxicity or grade 2 or higher non-hematological toxicity. After toxicity was reduced to grade 1 or below, treatment was restarted at a lower dose. The treatment was suspended if the patients continued to experience further toxicity. Dose re-escalation was not applied in this setting. Treatment continued until disease progression, unacceptable toxicity, or patient refusal.

Between January 2009 and January 2014, a total of 13 patients were treated at the Department of Medical Oncology, Georges-Francois Leclerc Cancer Center, Dijon, France by FOLFIRI plus bevacizumab combination treatment for metastatic intrahepatic cholangiocarcinoma after failure of first-line gemcitabine plus oxaliplatin combination. Demographic details of the patients included in the study are shown in Table 1. All 13 patients were assessable for toxicity, survival, and radiological response using RECIST criteria.

Concerning bevacizumab-induced toxicity, no interruption to treatment was required, and no bowel perforation, brain bleeding, or digestive bleeding was observed. Tolerance of bevacizumab was good, with only 2 cases of grade 2 hypertensions and epistaxis. At the time of analysis, with a median follow-up of 25 mo (range: 6-48 mo), a total of 7 patients (83%) had died, all due to disease progression.

All included patients were previously treated with systemic chemotherapy with gemcitabine plus oxaliplatin as a first-line treatment, which failed. In addition 4 patients received hepatic intra-arterial chemotherapy by gemcitabine plus oxaliplatin as a second-line treatment. All patients are metastatic at the start of FOLFIRI plus bevacizumab treatment. According to the RECIST criteria, among the 13 assessable patients we noted one complete response, 4 partial responses, 6 stable diseases for at least 6 mo, and two progressions. The response rate was 38.4% (95%CI: 12.5-89) and the disease control rate was 84.5% (95%CI: 42-100). At 2 mo, the CA 19.9 level decreased in all patients (mean level 518 ± 1254 vs 173 ± 364, P = 0.04 Wilcoxon test). On June 2014, 7 deaths occurred, PFS was 8 mo (95%CI: 7-16), and median OS was 20 mo (95%CI: 8-48). Figure 1 shows PFS and OS curves. 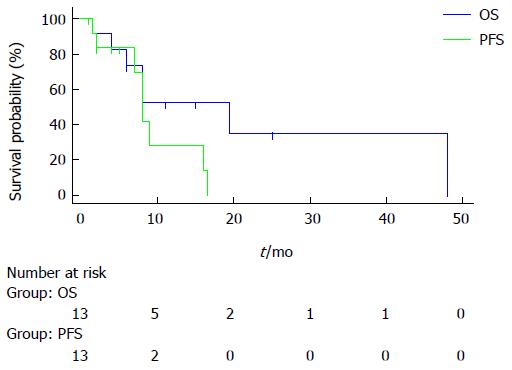 Few studies have tested the efficacy of targeted therapies in biliary tract cancer. The mTOR inhibitor everolimus was tested in second-line therapy in a recent phase II trial with PFS around 3 and an 8 mo of OS with acceptable toxicity[20]. Anti-human epidermal growth factor receptor (HER)1 and HER2 therapies were also tested. Cetuximab failed to demonstrate efficacy in first-line biliary tract cancer[15]. Erlotinib was tested in combination with gemcitabine plus oxaliplatin and did not improve PFS or OS[7]. Moreover, combination of erlotinib plus sorafenib[21] or monotherapy with lapatinib failed to demonstrate clinical efficacy[22]. Sunitinib was also tested in a phase II study as a second-line regimen and demonstrated marginal efficacy and significant toxicity[23].

We decide in our institute to propose off-label usage of FOLFIRI bevacizumab for patients with cholangiocarcinoma that progressed after first-line gemcitabine plus oxaliplatin usage. This off-label usage was validated after multidisciplinary staff consultation, and all patients give written consent to this off-label drug usage. We also prospectively examined the efficacy and toxicity of the protocol for each patient. Limitations of this study were its retrospective nature, non-comparative design, and low number of patients. However, very few prospective studies have been conducted to assess second-line efficacy for cholangiocarcinoma, and no comparative study has been conducted in this field. Although our study was retrospective and included only a limited number of patients, we selected a very homogeneous population of intrahepatic cholangiocarcinoma, all previously treated with an up-to-date first-line chemotherapy regimen. In addition, this rate of disease control and significant median time to progression for a disease with a very poor prognosis led to the conclusion that such chemotherapy regimens have a significant clinical impact.

In conclusion, FOLFIRI plus bevacizumab combination therapy showed anti-tumor efficacy and safety as a second-line treatment for metastatic intrahepatic cholangiocarcinoma refractory to gemcitabine plus oxaliplatin first-line chemotherapy. Larger scale prospective trials should be conducted to confirm this conclusion.

First-line chemotherapy for metastatic biliary tract cancer consists of gemcitabine plus platinum regime. However, the strategy for second-line therapy remains an unanswered question.

Few studies focus on the efficacy of second-line therapy for metastatic biliary tract cancer. Based on previous studies, patients were treated with a combination of FOLFIRI plus bevacizumab.

Using the RECIST criteria, the responses were: complete response for 1 patient, partial response for 4 patients, and stable disease for 5 patients at 6 mo. The median overall survival and time to progression were 8 and 20 mo, respectively.

This study underlines the possible efficacy of bevacizumab plus FOLFIRI as a second-line treatment for metastatic cholangiocarcinoma.