Spontaneous perforation of a duodenal ulcer secondary to allergic eosinophilic gastroenteritis (EGE) has not been previously reported. We present such a case in a teenager who presented with peritonitis. After exploration and operative repair of his ulcer, he continued to experience intermittent abdominal pain, and further evaluation revealed eosinophilic gastroenteritis in the setting of multiple food allergies. His EGE resolved after adhering to a restrictive diet. Both duodenal ulcers and EGE are very rarely seen in pediatric patients. EGE has a variable presentation depending on the layer(s) of bowel wall affected and the segment of the gastrointestinal tract that is involved. Once diagnosed, it may respond to dietary changes in patients with recognized food allergies, or to steroids in patients in whom an underlying cause is not identified. Our case highlights the need to keep EGE in the differential diagnosis when treating pediatric patients with duodenal ulcers. The epidemiology, pathophysiology, and treatment of EGE are also discussed, along with a review of the current literature.

Core tip: We report a case of a perforated duodenal ulcer secondary to allergic eosinophilc gastroenteritis in a pediatric patient. To our knowledge this is the only reported case of spontaneous duodenal ulcer perforation in this patient population. Herein we discuss the details of our case, highlighting the need for increased suspicion of eosinophilic gastroenteritis (EGE) in pediatric patients with gastrointestinal ulcers. Further, we discuss the epidemiology, pathophysiology, and treatments of EGE, along with a review of the current literature.

Eosinophilic gastroenteritis (EGE) is a rare disorder characterized by intestinal inflammation with eosinophilic infiltration of the wall of the gastrointestinal tract, with or without peripheral eosinophilia[1,2]. This disease occurs in the absence of most known causes of eosinophilia such as parasitic infection, malignancy, or drug reactions. EGE can involve one or more layers of the bowel wall, resulting in a wide range of presenting symptoms that typically include nausea, abdominal pain, and diarrhea[1,2]. Herein we report an unusual case of EGE, which presented as a perforated duodenal ulcer in a teenager.

A sixteen-year-old boy presented with acute epigastric abdominal pain and focal right-sided peritonitis on physical exam. He had no significant medical history, and no history of non-steroidal anti-inflammatory drug (NSAID) or cocaine use. Initial labs demonstrated leukocytosis with a normal eosinophil count, a computed tomography (CT) scan showed a small volume of free air, and he was taken to the operating room for exploratory laparoscopy. He was found to have a perforated ulcer in the 1st portion of the duodenum (Figure 1), which was repaired using a Graham patch. 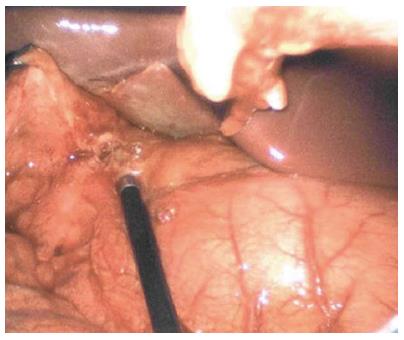 Figure 1 Intraoperative photo depicting the perforated duodenal ulcer in the 1st portion of the duodenum.

He was treated presumptively for Helicobacter pylori (H. pylori), and was discharged home after an uneventful postoperative course on a regular diet. Interestingly, his serological analysis was negative for H. pylori, and he continued to have diffuse, non-specific abdominal pain despite ongoing treatment with proton pump inhibitors. Two months after his operation he underwent esophagogastroduodenoscopy (EGD), which demonstrated significant esophageal edema, gastric erythema, and a small residual area of duodenal ulceration at the site of his repair (Figure 2). 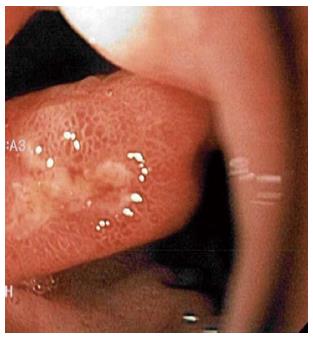 Histologic analysis of these grossly abnormal areas revealed eosinophilic infiltration of the esophagus, stomach, and duodenum (Figure 3A-C). Given an absence of other known causes for eosinophilia he underwent allergy testing, and was found to have allergies to multiple foods, including dairy, eggs, and peanuts. Five months after initiation of a restrictive diet, his abdominal pain subsided, and repeat endoscopy with biopsies confirmed that his esophageal and gastric inflammation had significantly improved, with resolution of the duodenal inflammation (data not shown). After three more months he re-introduced milk and peanuts into his diet, leading to recurrent abdominal pain. EGD with biopsies at that time confirmed recurrent severe esophagitis, prompting him to resume his restricted diet. 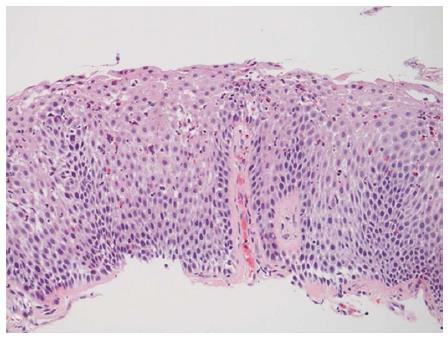 Interestingly, we have treated two other patients at our institution with duodenal ulcers secondary to EGE, one of which was found to have milk allergies as the presumed etiology. After that patient adopted a lactose free diet, the EGE resolved. The third patient had resolution of the EGE following corticosteroid treatment. All three patients were H. pylori negative and presented with abdominal pain as their primary symptom.

EGE is a rare benign disorder known to cause inflammation in all locations and layers of the gastrointestinal (GI) tract, resulting in highly variable presenting symptoms[1,2]. It is more commonly seen in adults, so may not be considered in pediatric patients with abdominal complaints[3]. EGE should be a part of the differential diagnosis in patients with unexplained GI symptoms, especially in those with peripheral eosinophilia or a history of allergies. The primary diagnostic criteria for EGE include GI symptoms, biopsies showing an eosinophilic infiltrate in one or more layers of the gastrointestinal wall, and the absence of other diseases that cause eosinophilia, such as drug reactions or parasitic infections. Peripheral eosinophilia is seen in up to 80% of cases, but is not mandatory for diagnosis. EGE may be classified as predominantly mucosal (60%), muscular (30%), or serosal (10%), and can occur in any segment of the GI tract[4].

The precise pathophysiology of EGE is poorly understood, but is presumed to involve either IgE-dependent or independent eosinophil recruitment and activation, followed by T-cell mediated chemokine production by eosinophils[1,2]. In support of IgE-mediated mechanisms driving this disease, it has been reported that up to 75% of patients with EGE have a personal or family history of food, medication, or pollen allergies[11]. In patients with EGE and food allergies, adherence to a restrictive diet will often result in remission of the disease[11,12]. In those who do not respond to allergen avoidance, up to 90% will respond to corticosteroid therapy[3]. Accordingly, our patient had resolution of his symptoms and pathologic findings after initiation of a restrictive diet. Furthermore, he had recurrence of his gastrointestinal inflammation following liberalization of his dietary intake, supporting the notion that food allergies and EGE caused his perforated duodenal ulcer.

In conclusion, EGE is a rare condition that has a highly variable presentation depending on the layer(s) of bowel wall affected and the segment of the gastrointestinal tract that is involved. Once diagnosed, it may respond well to dietary changes in patients with recognized food allergies or to corticosteroid treatment. Our series of three patients highlights the need to keep EGE in the differential diagnosis when faced with duodenal ulcers in pediatric patients, particularly in the setting of negative H. pylori testing.

Adherence to a restrictive diet resulted in resolution of his symptoms and histologic inflammation.

Few cases of eosinophilic gastroenteritis (EGE) have been reported in the pediatric population, and duodenal ulceration is an extremely rare presentation of EGE. In reports of EGE caused by food allergies, adherence to a restrictive diet is often curative.

Eosinophilic gastroenteritis is a rare disease known to cause inflammation in one or more layers of the bowel wall.

This case report highlights the need to keep EGE in the differential diagnosis when faced with duodenal ulcers in pediatric patients, particularly in the setting of negative H. pylori testing.

The authors present a rare and interesting case of allergic eosinophilic gastroenteritis with associated duodenal ulcer perforation. It highlights the clinical characteristics of this rare disease, and describes resolution of the inflammation after elimination of the inciting allergens.